If you haven’t noticed quite yet, we are huge fans of Back to the Future. For our RCCA subscribers, take a look at the spines of the 2020 issues of the printed version of the magazine and you’ll see that we snuck in Back to the Future quotes on each issue. We’re such big fans in fact, that we even love the third movie in the trilogy so that’s saying a lot.

So when it comes to RC cars, we have been at a loss that there hasn’t been a major release of the DeLorean Time Machine from an RC manufacturer. The movie was released in 1985 when RC was hitting its stride and the franchise continued through 1990 when RC was getting to be a huge hobby. Why hasn’t there been a hobby grade time travelling DMC-12 ever since?

One man has taken it upon himself to right the wrong with his version of the DeLorean Time Machine. We first caught wind of Brett Turnage’s 3D printed DeLorean when he submitted it to us for inclusion in Reader’s Rides last year. You may remember it as it was a real head turner. We thought that the ground up build deserved a closer look and asked him if we could examine it up close. He obliged and here’s a detailed look at the RC kit that we wished for many years that we had.

We got the story directly from Turnage himself on why and how he built this car. Let’s hear it from him in his own words. 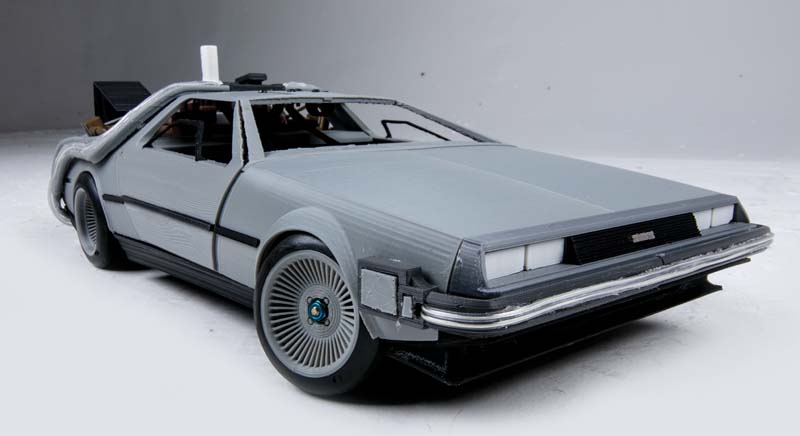 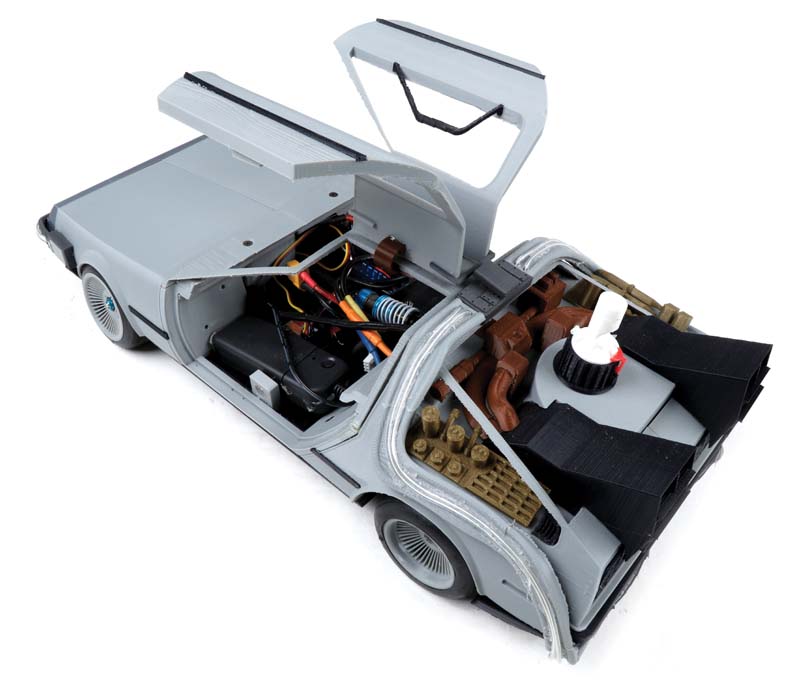 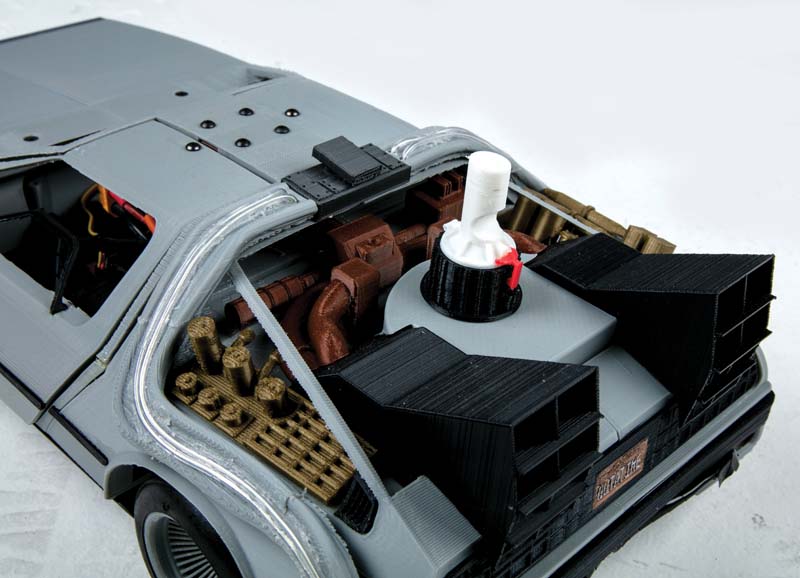 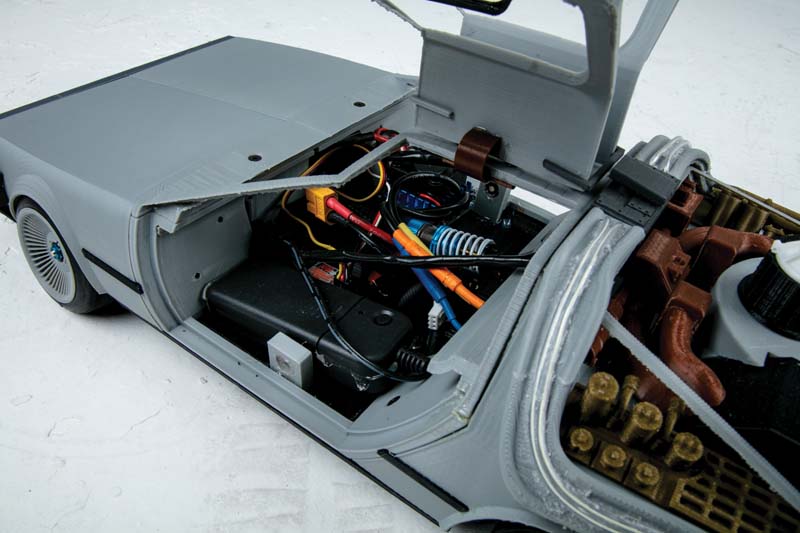 I designed the DeLorean back in 2017. It was around the time that I designed the 1991 Mazda 787B that RCCA covered in Readers Riders in the October 2018 issue with a follow up article about it in the November 2018 Issue. I was going through a rough patch in 2017 and I thought, “I’d love to have a DeLorean Time Machine.” I had just learned lofting in Fusion 360 and I went ahead and built the DeLorean as a way to test my skills.

The DeLorean has always had a certain allure to me. I’m an 80s kid, so growing up I fell in love with Back to the Future II and its flying DeLorean Time Machine and Barbie hoverboard. When I was a kid, I actually tried building a hoverboard.
On this CAD model that I made of the DeLorean, I tried to recreate everything. I ended releasing the rendering of the CAD model and releasing the files online. I posed the car in a style that was reminisce of artist Chris Rahtbone who had painted a really cool theme of pictures of the DeLorean that I liked.

The renderings became a hit. I’ve been asked by companies to use it and it’s been something has been real positive for me, but I always planned to turn it into an RC car to truly bring it to life in three-dimensions. A rendering covers a little more than the outside body. Turning it into an RC car requires gutting it and dealing with multiple systems and components that have to work well together.
A standout challenge to bringing a 1/10 ratio DeLorean is its thin A and B pillars around the passenger compartment and trunk area. Other cars that I have done usually have bulky cockpits with robust pillars. Often their bubble shape aids to that strength, but with the DeLorean none of this was true. Printing its extremely thin A and B-pillars would be a failure point. I had to figure out how to confront this problem.

I gutted the car and started working on the chassis design back in 2018, but I stopped work on it before I had finished it. When I stopped it was about 70% done. Life went the way that goes, and I just didn’t have time anymore to build cars. It was my final car that I was planning to release after building cars for four years with a variety of success: multiple Senna-era McLaren F1 cars, Audi R18, Mazda 787B, and the first 3D printed motorcycles, but it seemed that the DeLorean would never become any more than a computer rendering. 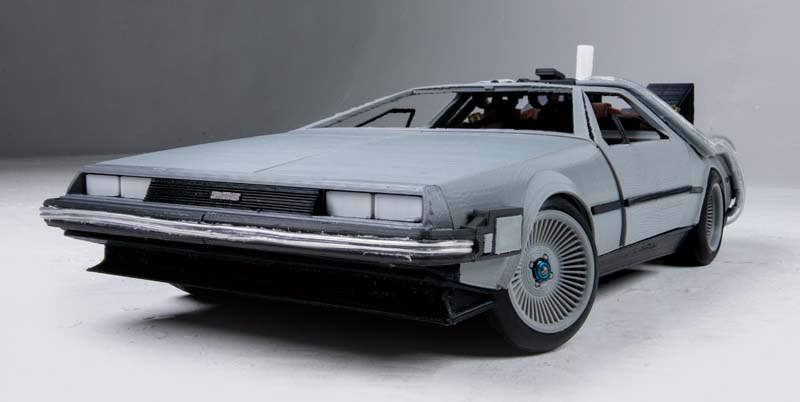 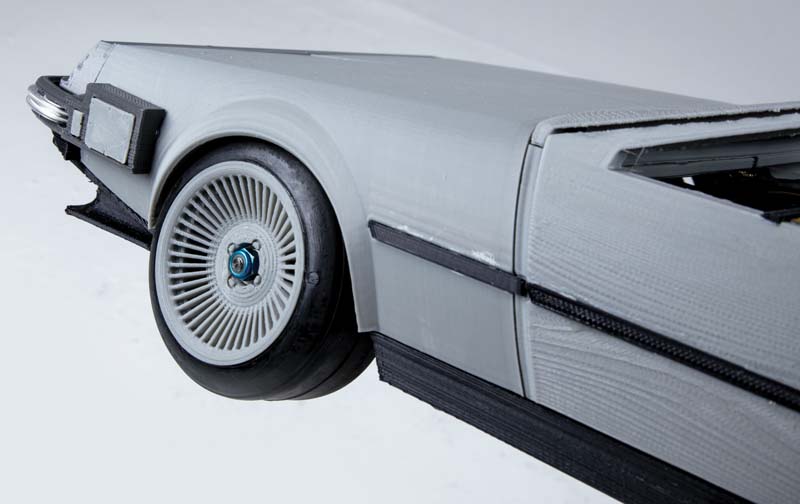 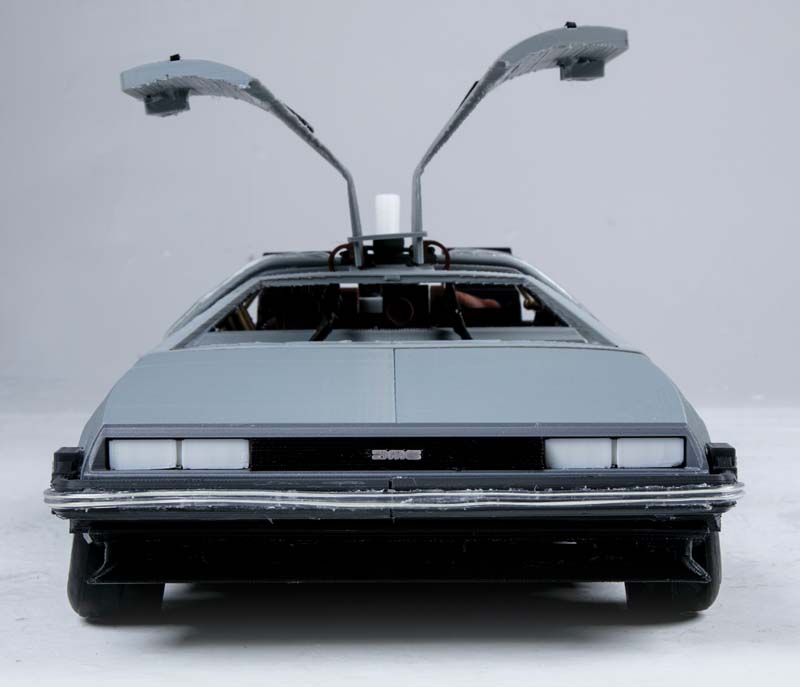 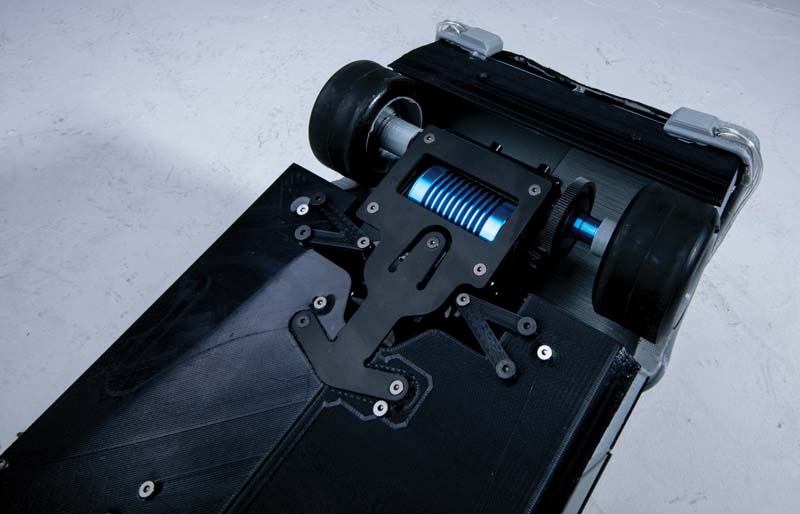 Fast forward to the COVID crisis. The world stopped. I found myself working on masks for people and along the way I thought “I should release the DeLorean.” I felt it would make people smile and get a laugh at seeing this iconic vehicle come to life.
I reopened the files, which had not been touched in 2 and 3 years in some cases and started working on finishing it. I added the roll cage, broke the car up into components. I worked on figuring out the doors because there is no way that you can do a DeLorean without having working gullwing doors. I confronted the thin A-pillars by constructing a roll cage that would bulk up those areas, keeping their iconic design that was as true to life as possible, but increasing their cross-section, which with make them more robust.
I heard from people who built my vehicles that the parts were hard to find. I usually would give out a part numbers. I decided to combat this; the DeLorean would be built using parts that I sourced from an available kit. I choose the Tamiya F104 Pro II. I’m a big F1 fan and most of my cars are based off of the F104 architecture for suspension, rear differential, and tire parts. I got the kit and started to integrate the new style T-bar into my design.

The doors were definitely a challenge and required bolts and nuts to affix them to the roof. They close on their own and are held shut by N52 magnets. There’s an M2x20 rod, which acts as the pivot point for the hinge.

I decided not to incorporate windows because unlike a typical RC car where the body lifts off the chassis, the DeLorean’s body is apart of the chassis, so this car is a unibody. A windowless design with the gull-wing doors gives easy access to all of the electronics.
My favorite part is the Mr. Fusion reactor. There is lots of detail in that part and if a person uses high detail printer like an SLA 3D printer, it comes out with all the Mr. Fusion writing and logos. The wheels had to resemble the original DeLorean’s multi-spoke wheels. I did add a dish and a lip to both the front and rear, but its my version of the car, so its has a little new style deep dish and concave wheels. The iconic license plate “OUTATIME” is also in the 3d printed files, and with a high detail printer, even the “California” will pop out. 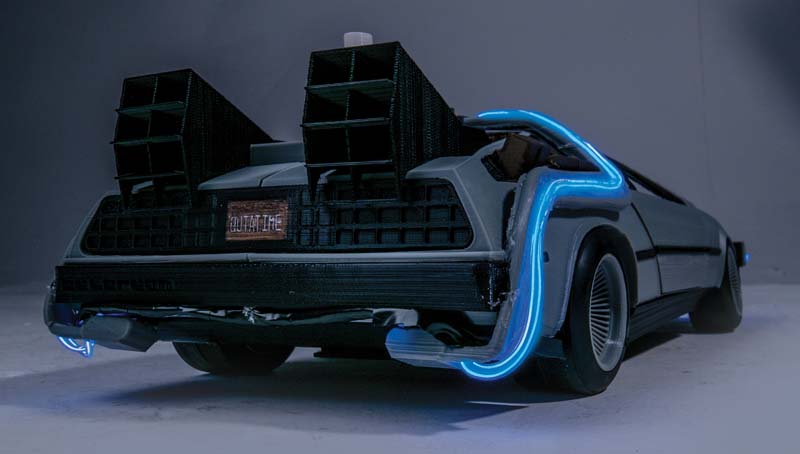 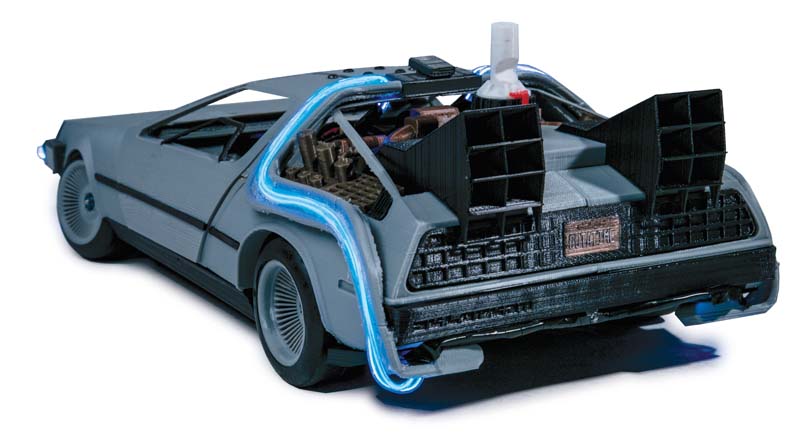 I wish I could’ve made the wheels flip and fly, but flipping wheels would have required micro wheels and it would just be a gimmick and flying would have required drone fans everywhere — I mulled those ideas for awhile. I built the model in seven days from the first print. Round the clock printing, building — it was a blitz week of building this car in only opening that I had in my schedule.
It’s available for free on multiple 3D printing sites like Thingiverse, Myminifactory, and Cults3d. The detailed instructions is on the Instructables website (see the URL in the spec list). It’s definitely an expert-level build project. Part model making and RC car building, but it is definitely worth building if you’re a fan of the movie or the car.

I hope that people can see the benefits that 3D printing can offer industries like RC cars where the only thing stopping us is our own imagination.