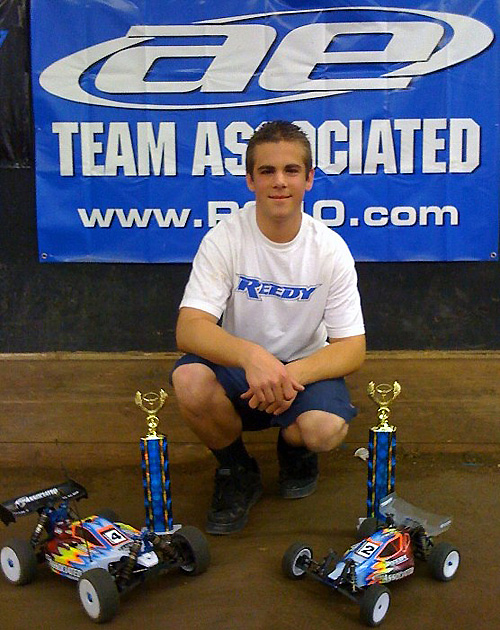 Continuing where he left off from round 1 of the Jimmy Babcock Racing League Electric Series, Team Associated/Reedy/LRP driver Steven Hartson dominated the field in both ultra-competitive classes of 1:8 electric buggy and 2WD modified.

Starting from the pole in 2WD, Hartson quickly gapped the field and cruised home for an easy victory. However in 1:8 electric buggy he got stuck behind second place for the first 4 minutes of the 10-minute final. Patience and experience from the SoCal teenager proved to pay off as a tangle between first and second coming on to the 100′ straight-away allowed Hartson to split the gap, never look back, and take the win.

Not to be left out, the 1:10 electric classes at the JBRL series are also extremely competitive, and again the Factory Team B4 proved to be the best of the best, claiming the victory in all three 2WD classes. In 17.5, Michael Gonzales took the win while Associated/Reedy/LRP’s Chris Jarosz took home his second consecutive TQ and win in 13.5 along with Hartson in 2WD Modified. Also taking victories using Team Associated vehicles were Shane Good in 17.5 Truck and Sportsman Short Course along with Zach Rogers in 13.5 Truck.

Next up is the Team Associated 1/8th Scale Championship, again at Southern California’s OC/RC Raceway in beautiful Huntington Beach, CA.