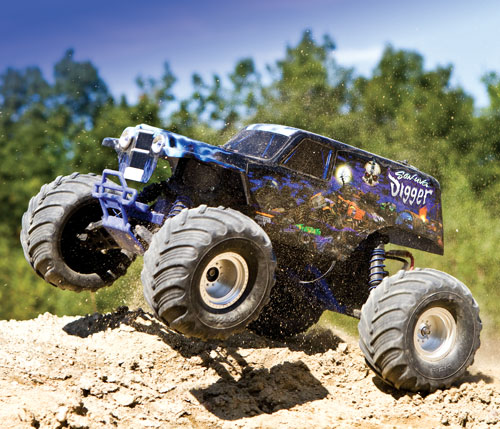 Traxxas Son-Uva Digger and Grave Digger 30th anniversary
or Over a year now, Traxxas has been releasing licensed replicas of the Monster Jam monster trucks. While they’re essentially the same underneath their scale bodies, monster truck fans swarm to each new release to keep their field of mini monsters complete. The newest editions to the fleet are the Grave Digger 30th Anniversary and Son-Uva Digger trucks driven by father and son duo Dennis and Ryan Anderson. So, what makes this pair of separately sold monsters of mayhem so special? Are they just a set of new stickers and colored accents? Well, if I’m honest, yes. But that’s exactly what makes them so exciting. When you buy one of these trucks, you’re buying it for what has always been at the root of this hobby in its purest form—the fantasy. It’s that and the notion that this is as close to driving the real Grave Digger as most of us will ever get. But fear not, my upgrade-hungry little car crushers—Along with the release of the Son-Uva Digger truck complete with new body and blue accent parts, Traxxas has made the 30th Anniversary Digger into what would be considered a “special edition” trim. Now is a better time than ever to imagine yourself behind the wheel, doing donuts, and putting on a killer freestyle show—so let’s do this!

1. Realistic Rollers
As with all of the Traxxas Monster Jam lineup, Son-Uva Digger comes with some pretty sweet silver wheels wrapped in set of monster truck-style tires complete with custom cuts like the big boys do. When paired together, this combo gives the truck a super realistic look while just sitting on your workbench.

2. Blue Sunday Sunday Sunday!
To match the black and blue scheme of Son-Uva Digger, the RC version included blue plastic accents for the bumpers, skidplates, and lower supports. The parts are made out of the same high-quality plastic as all Traxxas Monster Jam trucks, but the blue parts give it a totally trick look.

3.Waterproof Speed Control
As good looking as this truck is, it most likely won’t stay clean for long. Whether you’re performing some high-flying, car-crushing action or splashing down for a mini mud bog, the included XL-5 speed control has you covered. Its waterproof case and technology will keep you running no matter what you throw at it.

4.New Lifted Lid
Son-Uva Digger features a 1980 Willys body like the one that is run on the real truck. The RTR comes with a fully decaled body, but Traxxas offers an optional body with lights installed (pictured). A little-known fact, the 1980 Willys body that is used for Son-Uva Digger was originally used as a mud bogger version of Grave Digger.

PERFORMANCE
Both the Son-Uva Digger and Grave Digger are based on the wildly popular and successful Traxxas Stampede platform, as are the rest of the Monster Jam lineup. In other words, I had a good idea of what the trucks were going to drive like before I even hit the ground running. As expected, the trucks were a ton of fun to drive and were very stable considering they’re taller in stature compared to most RC trucks. The Stampede platform is a time-proven combination of steady handling that’s easy to drive and exhibits just enough speed to keep things interesting. I happened to have brought them home with me, so when the punchy black and green paint scheme caught my son’s eye, it was on. He took the Grave Digger and I grabbed the Son-Uva Digger and we proceeded to have a great time blasting up and down the road. To make things a little more exciting, I brought out a few of my other cars and lined them up in front of a ramp jump I keep handy. Before we knew it, we had our own Monster Jam show going on with kids from the nearby park watching as we thrashed over the other vehicles and nearly missed a few mid-air at times. I’ve always maintained this but I feel it needs to be pointed out once again that the coolest part of these, or any of the Monster Jam trucks for that matter, is that whether you’re accelerating or hard on the brakes, the body rolls over in much of the same fashion that the truck’s full-sized counterparts do. Back on my workbench, I couldn’t help but admire the graphics on each of the trucks. I found myself visualizing them in an arena with the crowd roaring and flashbulbs going off. While the Grave Digger 30th Anniversary version comes with them installed, I highly recommend getting the optional Son-Uva Digger body with the light kit. Although they’re just for the headlights on the truck, they really do add an extra flair to an already scale-looking vehicle and give it even more attitude—if that’s even possible.

VERDICT
Driving these trucks is always a pleasure, as they continually remind you that RC doesn’t have to be ballistically fast or dominating on the track to have a blast—all it has to be is … well, fun. The option parts that come with the 30th Anniversary Grave Digger put it over the top compared to the rest of the Monster Jam lineup, while the slick new looks of Son-Uva Digger give you an entirely new truck to add to your collection. With keen great looks and the mystique of a legendary monster, as well as being a newcomer to the scene, these two trucks have what it takes to put you at the top of your very own Monster Jam World Finals.

Lights!
One of the coolest details of the 30th Anniversary Grave Digger is the factory-installed light set. Red headlights up front, as well as lights for the eyes of the reaper on the side of the 1950s Chevy Panel truck body, give this Digger a little something extra that goes a long way. 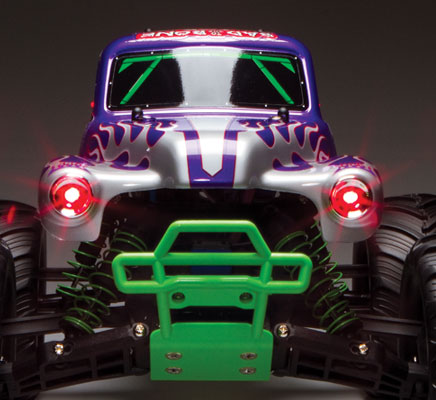 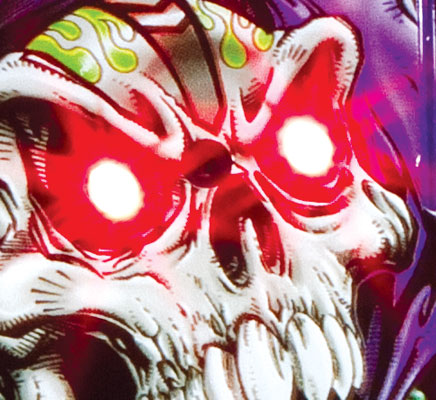