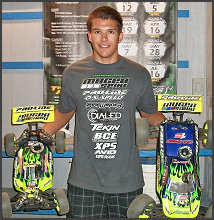 Dylan managed to TQ all four rounds of qualifying in both buggy and truck classes and took home the win in both as well!