Some of my earliest and fondest memories as a kid were the weekend RC parking lot races at a local to me hobby shop called Silver Star Hobbies and the occasional outing to the Ranch Pit Stop in Pomona, California – that is, whenever one of the grown ups bothered to give us a ride. These were magical places to an RC obsessed kid growing up during the 80s.

It was the age of frequency crystals and mechanical speed controllers. At that time, it must have been 1986 or so, I shared a Tamiya Boomerang with my older brother. It was our first RC car and we loved it. We learned so much racing that buggy. He eventually graduated to a Kyosho Turbo Optima and I inherited the Boomerang all to myself and that’s when I proceeded to really go bonkers for RC. I ended up working at Silver Star Hobbies and loved every minute of it. As I grew older, I went off to pursue other things such as real cars, I eventually fell out of the RC hobby. 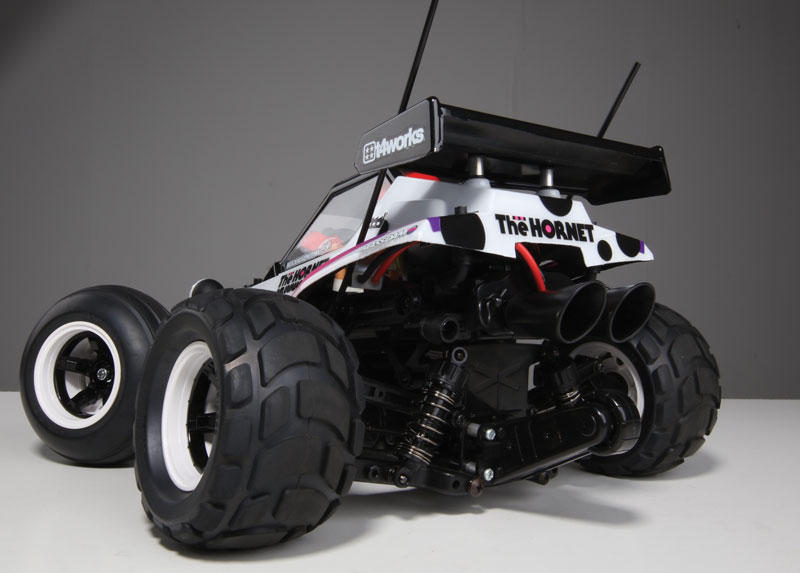 POWERED BY NOSTALGIA
In the years since, I have dabbled with RC here and there. I bought a Tamiya Tamtech Frog a while back but found it lacking hop up parts to hold my interest. About a decade ago, Tamiya started rereleasing their nostalgic 80s and 90s kits, including the Boomerang. Feeding off the good vibes of days past, I found that the RC bug had captured me again. I reentered the hobby collecting the kits I never could afford as a kid all the while learning about multi-frequency 2.4GHz transmitter systems, brushless motors and more.

Tamiya’s rereleases have been a smashing success worldwide as evidenced by their ramped up releases of old favorites. As a matter of fact, I’m chomping at the bit to get their release of the Terra Scorcher due later on this year. Building on this nostalgic success, Tamiya has released a “Comical” series of some of their most popular buggies. I’m sure you’ve already seen them at your local hobby shop, online and even here in the pages of RCCA. They’re cute, cartoonish versions of iconic Tamiya off-roaders.

ALL OUT FUN
I have to say, as appealing as they are at first glance; I wasn’t sold on these cartoon buggies. I felt that they were made purely to appeal to nostalgia and offered very little else. My initial reaction was that I wasn’t going to add it to my collection, but after further investigation – and building my own, I’m glad to say that couldn’t have been more wrong. The Comical series offers much in terms of building and driving fun. After seeing videos of it in action and then experiencing it myself, it’s clear to see that this kit is meant to be a fun, wheelie popping buggy for use on all types of surfaces. 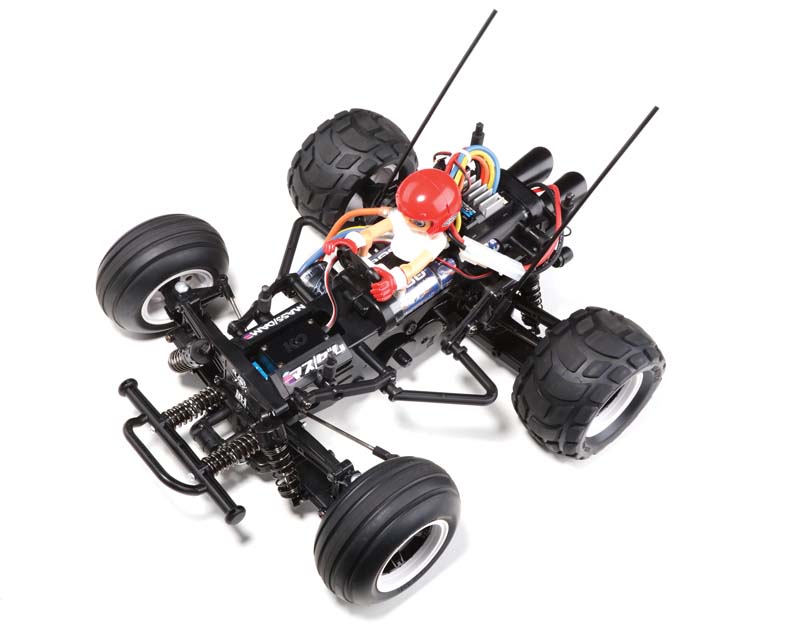 Its chassis is based on the popular two-wheel drive WR-02 chassis from Wild Willy 2. Called the WR-02CB, the Comical Hornet and its brethren are equipped with a monocoque-type chassis that boasts newer parts that are specific to the Comical series. Most, if not all, hop up parts that fit the Wild Willy 2 and other WR-02 derived chassis should fit the WR-02CB as well.
The mid-motor, rear wheel drive kit comes with its gearbox already assembled, which makes the kit quick and easy to build. Personally, I wouldn’t mind having a non-completed gearbox to build from ground up but for those who have grown up in the age of RTRs, this is a good beginner’s kit to tackle. 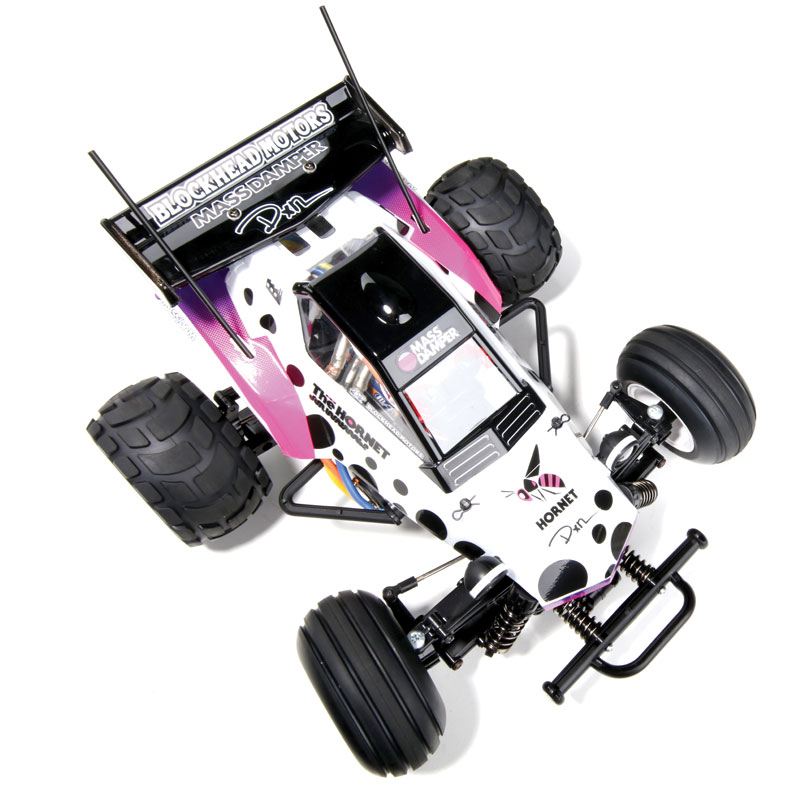 The Jun Watanabe version of the Hornet is a daring yet stylish look for an RC buggy.

Similar to the Wild Willy 2, the Comical Hornet has a high profile that looks like it could tip over when performing sharp turns and maneuvers. Although it doesn’t make much performance sense, I like to see vehicles, even buggies, with a lowered stance. I simply think they look cooler lowered.

I started researching how I could slam my Comical Hornet and eventually found a way to give it an exaggerated wider, lower stance. I achieved this by replacing the suspension arms with ones from a Tamiya WT-01 chassis. Because the WT-01 uses the same overall architecture as the WR-02CB, its arms were able to fit without any modification. The wider arms necessitated extended steering linkage in the form of 3x71mm-threaded shafts, also from a WT-01 chassis, as well as longer drive shafts. I sourced those from spares that I have from a rerelease Boomerang I had stocked up spare parts for.

Other upgrades include a full set of Tamiya ball bearings and a Tamiya TBLM-02S 21T brushless motor. These motors are hard to come by, so made sure I got a couple during a recent trip to Japan. Tamiya recommends the quickest motor for this kit when using the included Tamiya TBLE-02S ESC to be 21T, so I adhered to their guidance. A quicker motor on the other hand would probably be even more fun, but it runs the risk of burning out the ESC. Other than those hop up parts, the black housing oil-filled CVA shocks, two-piece five-spoke wheels, bubble shaped tires all come stock with the kit. Finishing off the build, I installed a servo and receiver by KO Propo and paired it to my KO Propo EX-2 transmitter. 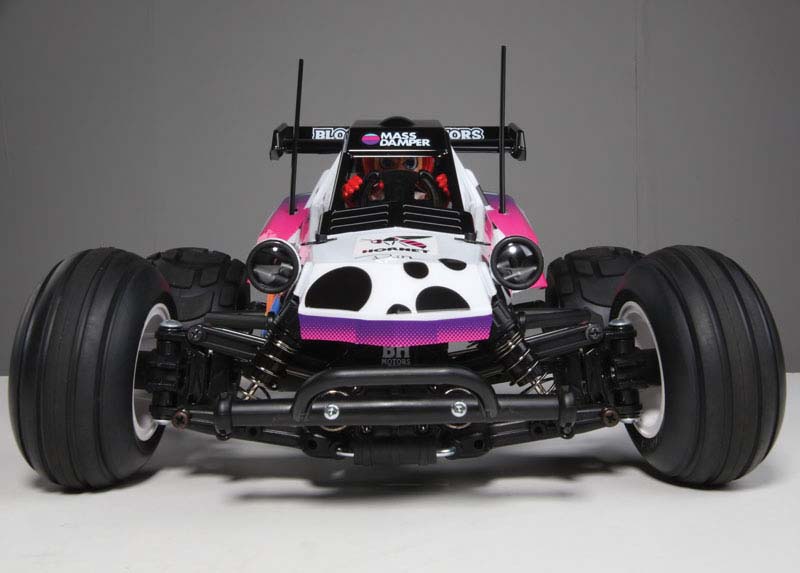 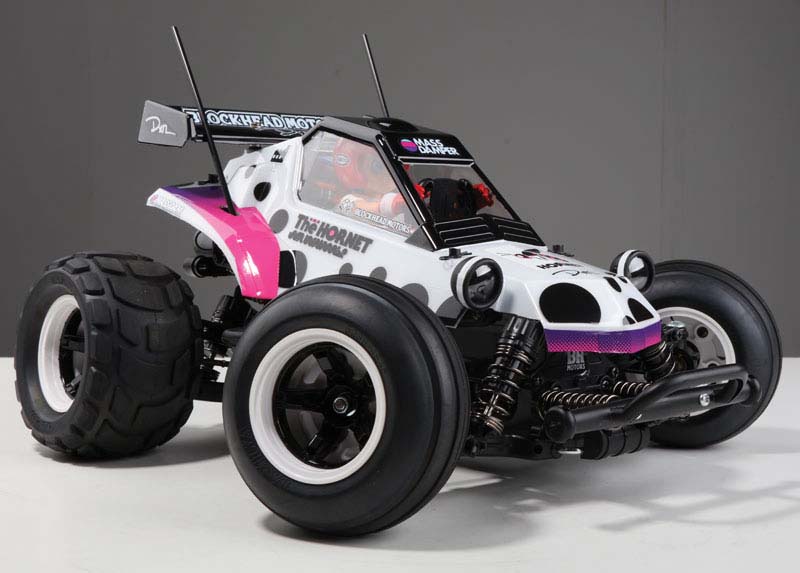 Though the classic Hornet colors have stood the test of time well, I wanted to go a different direction. I rarely build kits to reflect their box art. As I built the buggy, I thought about different looks and one kept creeping back into my mind. The Jun Watanabe version of the Hornet is a daring yet stylish look for an RC buggy. If you’re familiar with it, you’ll know that it’s a model that is sought after by collectors to this day. [Read more about Jun Watanabe in the following article.] Inspired by Jun Watanabe’s styling, I decided to go with his trademark black polka dot on white with pink and purple highlights.
The Comical Hornet’s body comes clear and requires cutting and trimming. The process of cutting, masking and painting was straightforward to do. I was able to get ahold of a Tamiya decal sheet from a Watanabe Hornet as well as decals from decal maker MassDamper.jp and Watanabe’s own Blockhead Motors and used them to help decorate the body with. The face of the two-piece wheels of the Comical Hornet come molded in orange, so I primed and painted them gloss black instead to better match the primarily black and white Watanabe color scheme. 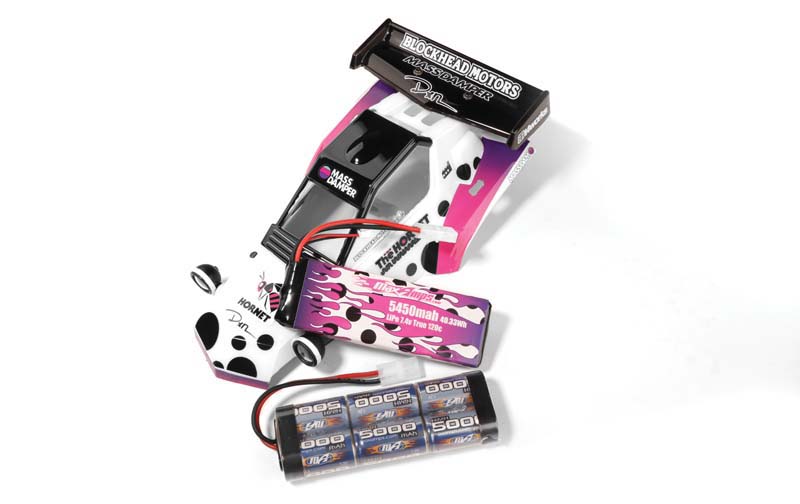 MaxAmps custom made batteries can be wrapped with custom graphics. How cool is this matching battery pack? 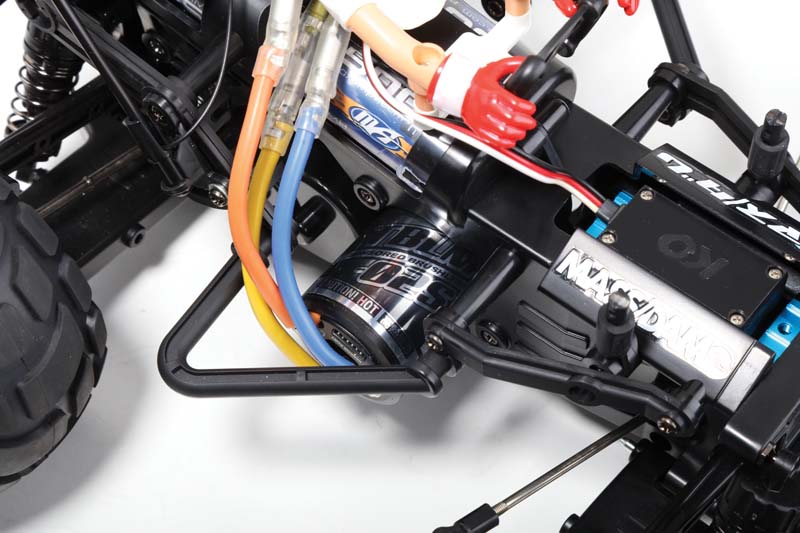 The Comical Hornet is powered by a 12T Tamiya brushless TBLM-02S motor. 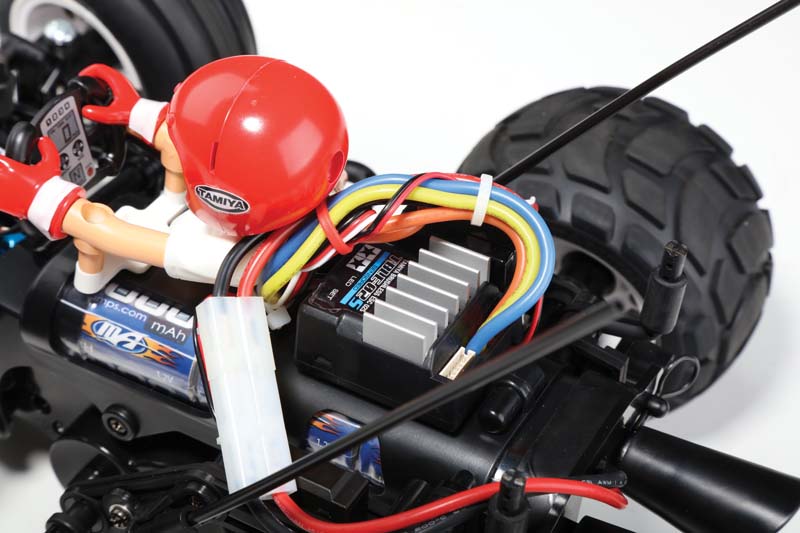 The kit comes with a Tamiya TBLE-02S ESC. It can be switched to run either brushed or brushless motors. 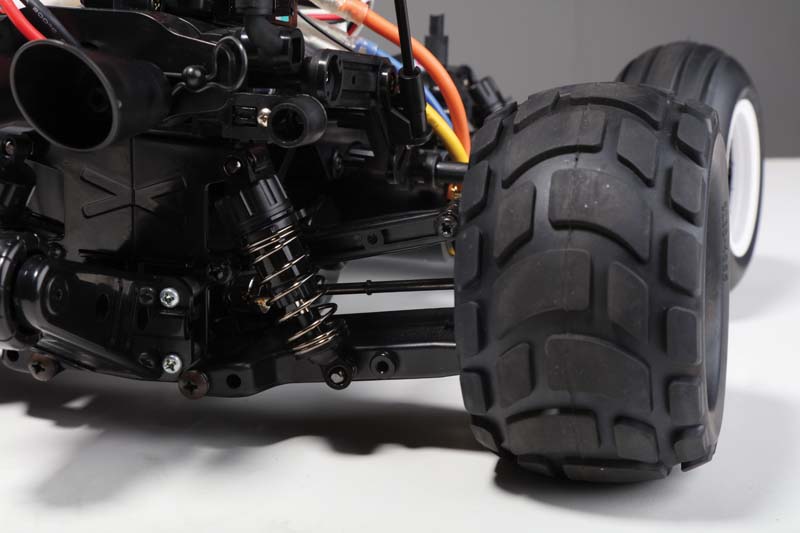 Wider arms requires longer drive shafts. These were sourced from a Tamiya Boomerang. 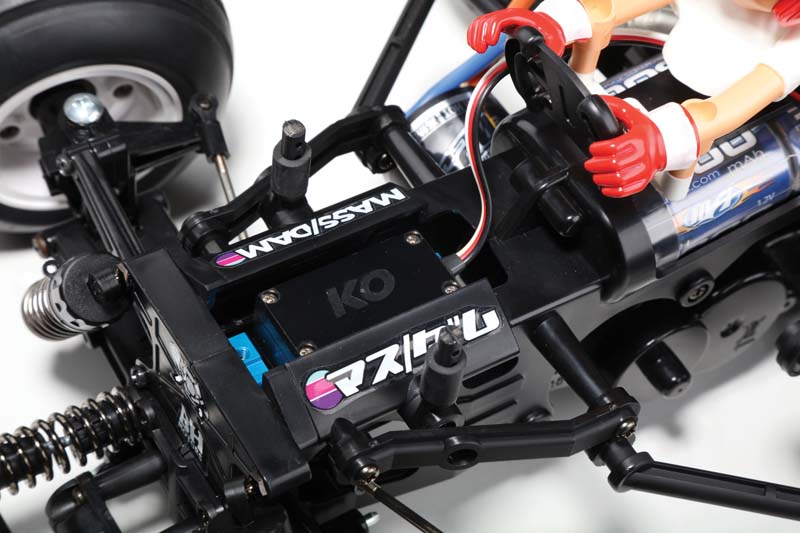 A KO Propo receiver is held in place with a blue anodized Tamiya Aluminum Servo Stay.

The super low and wide stance of the Hornet changed the driving characteristics of the buggy so that its lower center of gravity made it less wheelie happy and much more manageable when negotiating sharp turns, especially when going over bumps at speed. Take note that I’m using the term “speed” lightly. As configured, there’s no way it would be confused as a speed demon but perhaps if I upgrade the ESC to a more aggressive unit in the future a more spirited powerplant can be installed.

Powering the Watanabe Comical Hornet is a long-run 5,000 mAh NiMH six-cell battery made by MaxAmps. The battery seems to run forever, which is a far cry from the limited five-minute runs I got from NiCd’s back in the day. MaxAmps builds their batteries to order, using the freshest cells for your custom ordered battery. The performance difference is noticeable. The company is also capable of creating custom wraps for your custom built battery. So if you have a unique color scheme for your vehicle, such as the one on my Jun Watanabe inspired Hornet, perhaps you will go the extra mile and get batteries that match. 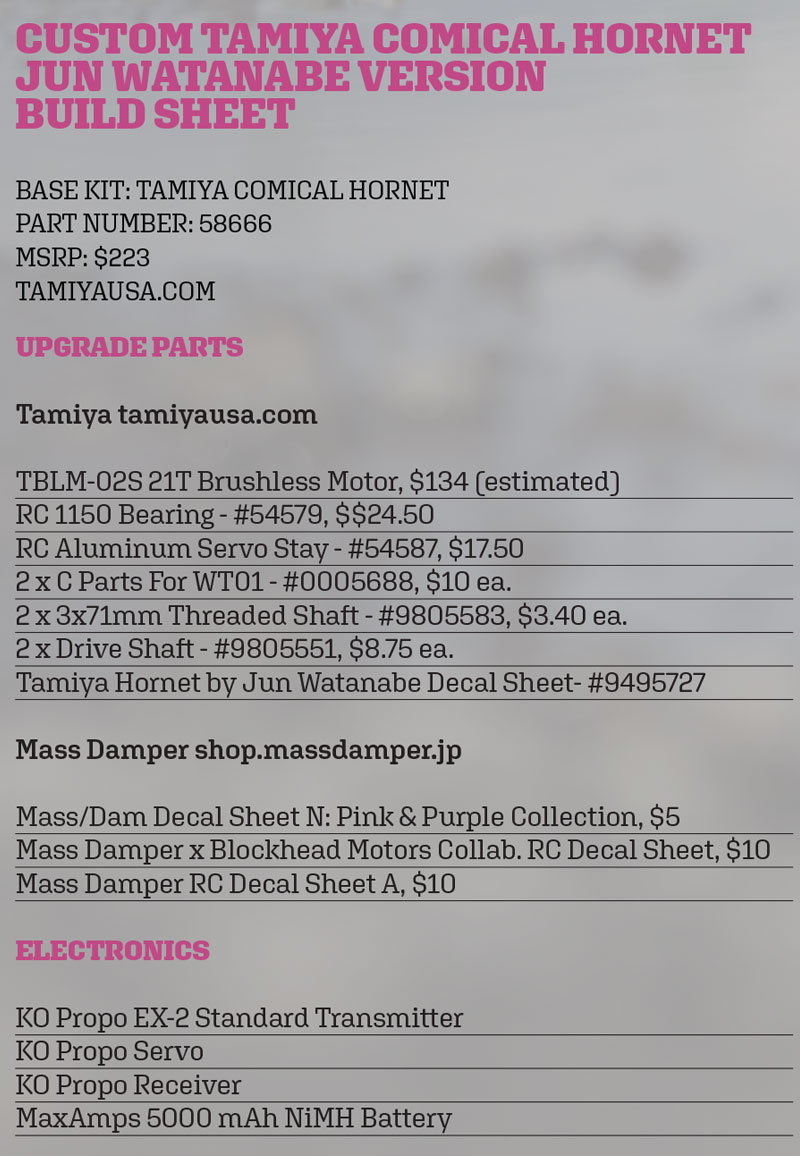 From someone that initially had no interest in Tamiya’s Comical series of off road buggies, I’ve surely changed my mind about them. I’ve enjoyed my Comical Hornet at the park and at the clay and carpet tracks alike. You should see the looks I get from people at the racetracks. It brings smiles to everyone’s faces, especially from the person that gets to drive it. Next up, I’m about to build up a Comical Avante; stay tuned to see what I end up doing with it. 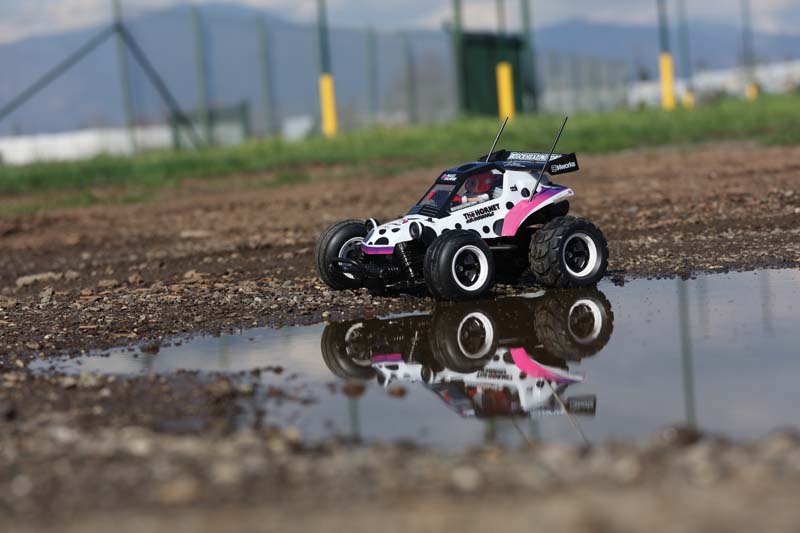