One of the coolest things about the RC car hobby is its its incredible depth—there’s just so much stuff to choose from. But on the flip side, it can seem like there’s an awful lot to learn before you feel like you can dive in with confidence when its time to part ways with your hard-earned dollars. No worries—everything you need to know to get started in RC is right here! 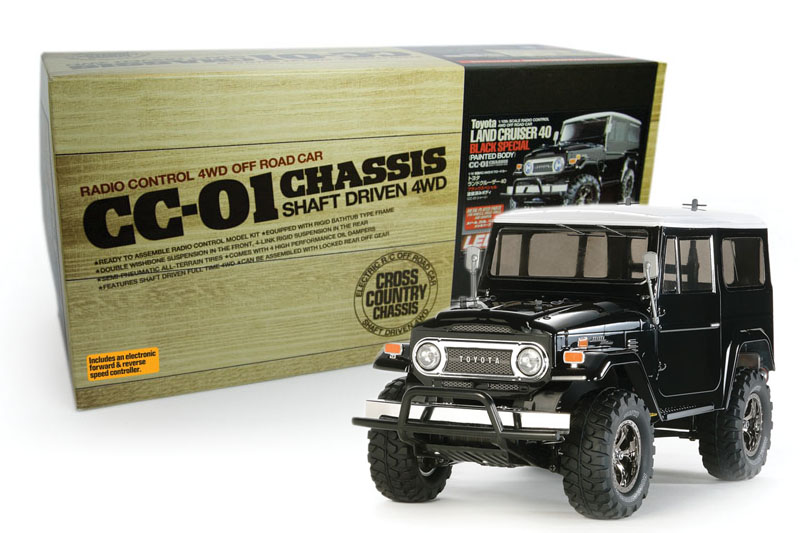 Kits & RTRs
No matter what type of vehicle you’re into, you’ll need to decide whether you want to build it yourself with a kit or let the manufacturer build it for you as a “ready to run”—or RTR, as they’re generally called.

It’s easy to build your own car—just follow along as the manual tells you what goes where. This is Tamiya’s Toyota Land Cruiser 40 on the CC-01 chassis.

Kits
Inside a kit box you’ll find bags of parts, which are labeled or numbered to correspond with assembly steps outlined in the manual. Some kits come with complicated components (like shocks, differentials, or turnbuckles) already put together. A few kits, such as some of those from Tamiya, include electronic components needed for completion; one of the perks of assembling your own kit is choosing the addi-tional equipment yourself so that you can choose exactly what you want. 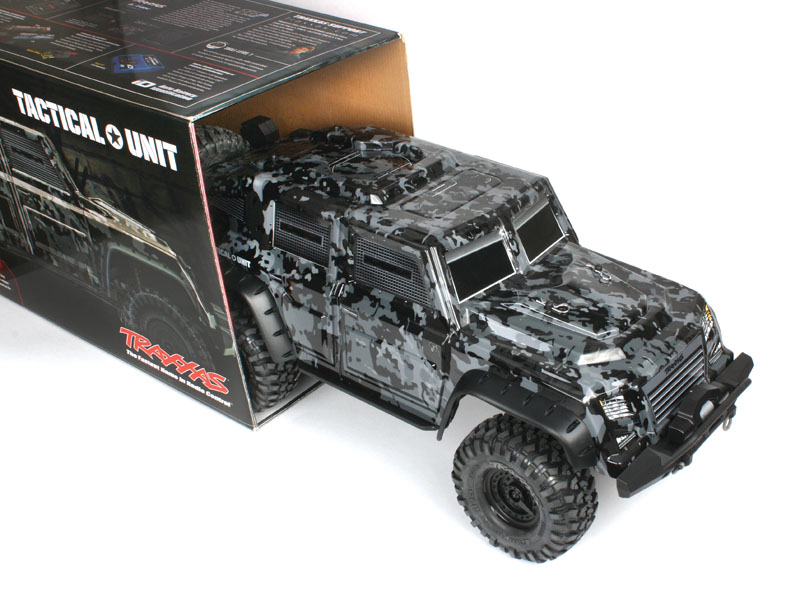 Ready-to-run models are just that: ready to run. Most require no assembly, or at most, you have to slip the wheels onto the axles or insert an antenna tube. 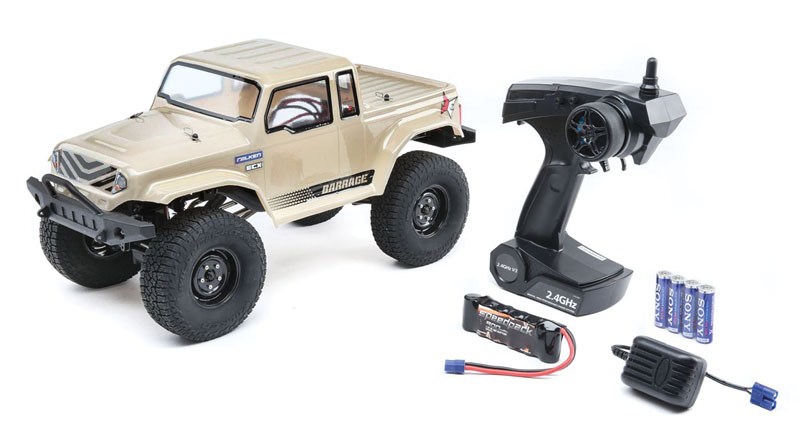 Ready-to-Runs
While kits commanded the industry in its early days, nearly all mainstream manufacturers offer at least a large portion of their product lineup as RTRs. Many RTRs require only AA batteries for the transmitter, while some even include those for you! An RTR is the easiest and fastest way to get rolling, although you miss out on the opportunity to learn the mechanical structure of the car by building it. RTRs often come with basic running gear to keep costs down, but an increasing number of them include top-shelf equipment.

If you like the idea of assembling bags of parts into a working vehicle that you’ll be able to drive or you’d rather splurge for the components you’d prefer to use, choose a kit. However, if you’re itching to shred the backyard in as little time as possible and don’t mind upgrading later as you gain more experience, an RTR is a great way to go. 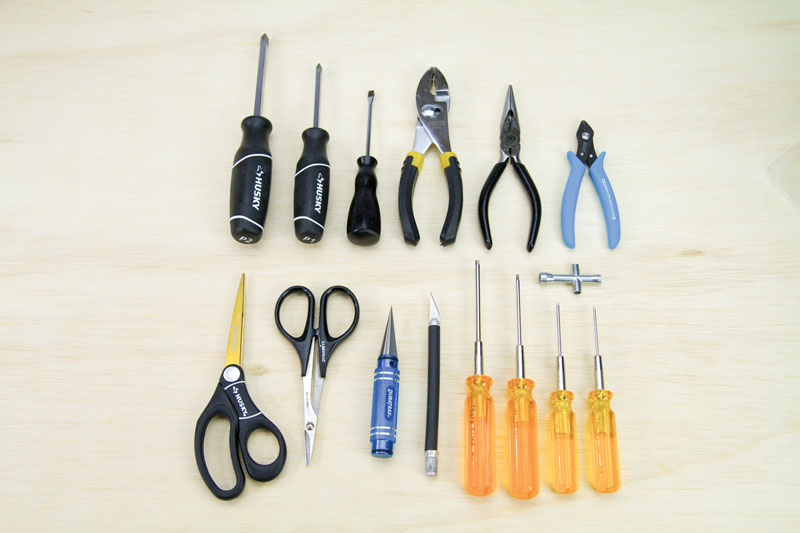 All kits and RTRS include a few essential tools for assembly and/or maintenance, but your bench sessions will be a lot more fun with a set of quality tools—which don’t have to be expensive. Collect these as you get deeper into the hobby.

Nut drivers: Just about every RC car includes a four-way wrench to fit the various nuts on the model, but it’s more convenient to use a nut driver for the most frequently removed nuts on the axles (7mm) and shocks (5.5mm).

Slip-joint and needle-nose pliers: There are a lot of small parts involved in RC car construction. It’s easier to use pliers than your fingers—and safer too!

Curved Lexan scissors: When it comes to trimming out bodies or cutting stickers, there’s nothing better.

Hobby knife: Also called by the popular brand name “X-Acto,” a sharp hobby knife will come in handy more often than you’d imagine: from trimming excess flashing from molded parts to digging dirt out of the head of a screw.

Body reamer: If you need to create a body-post hole in a new Lexan shell, there’s no faster, easier, or safer way to do it than with a body reamer.

Sprue cutter: Also known as a “flush cutter,” this tool is used to snip plastic parts off their “trees” (the correct term is “sprue”). The tool makes a clean cut without leaving a nub on the part. 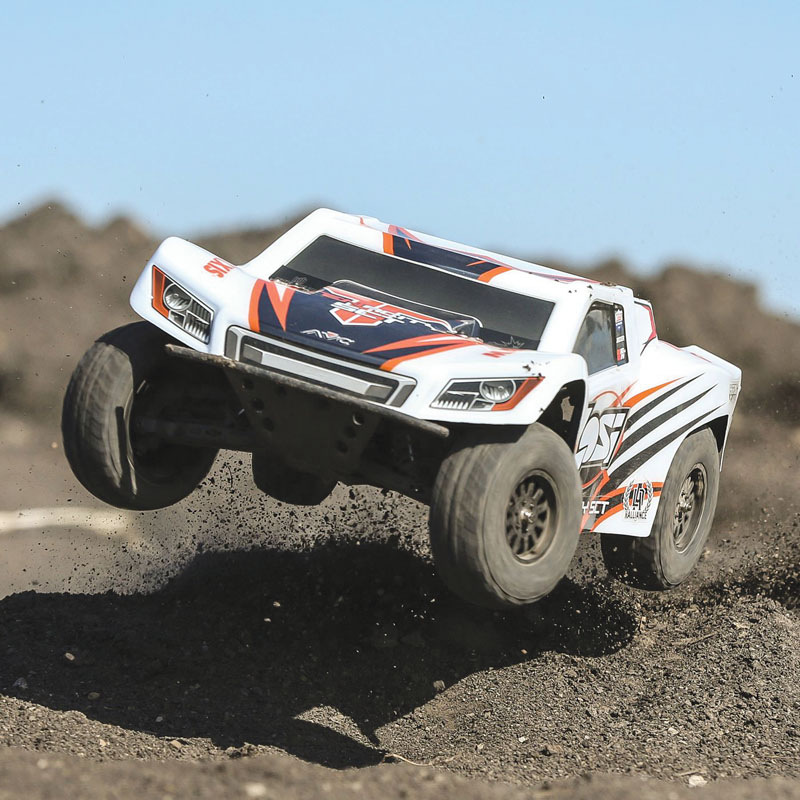 The Losi Tenacity SCT shows off its considerable electric horsepower

ELECTRIC POWER – The Most Popular Choice
Charge it up, plug it in, and flick the switch—there’s nothing simpler than operating an electric vehicle. Today’s motor and battery technology has closed the gap on nitro when it comes to power and run time, and the lack of noise and exhaust fumes make them the ideal choice for running indoors. 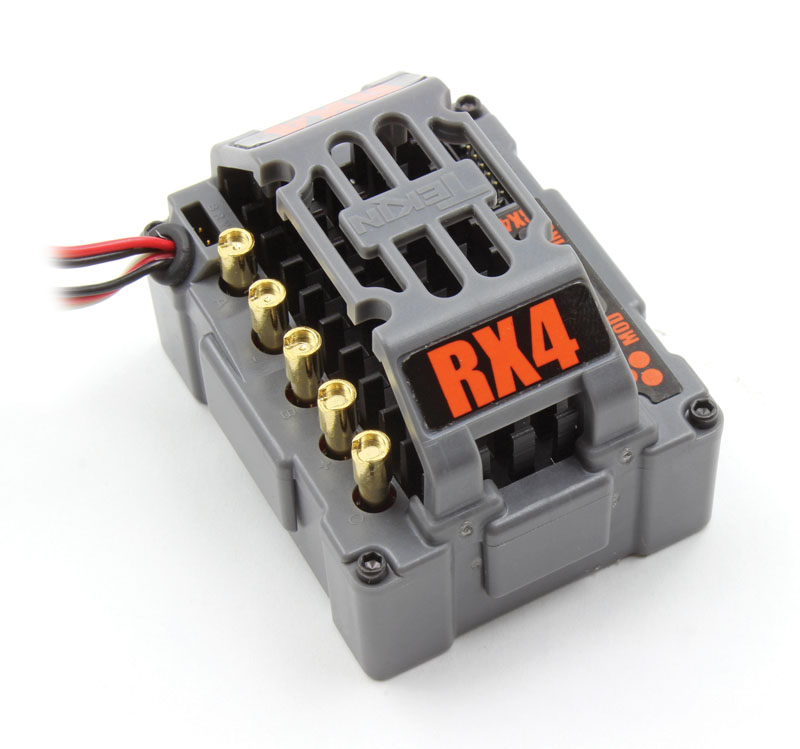 In an electric vehicle, the speed control acts as the throttle; it uses a signal from the receiver to determine how much voltage to send from the battery to the motor. Similar to radio systems, speed controls vary from plainly simple, with a one-touch setup and trouble-free operation, to feature-packed with adjustable throttle parameters like deadband (the space between throttle and brake), throttle curves (adjusting the linear or exponential throttle response), and braking strength. The Novak GTB 2 shown here is an example of a top-flight racing speed control. 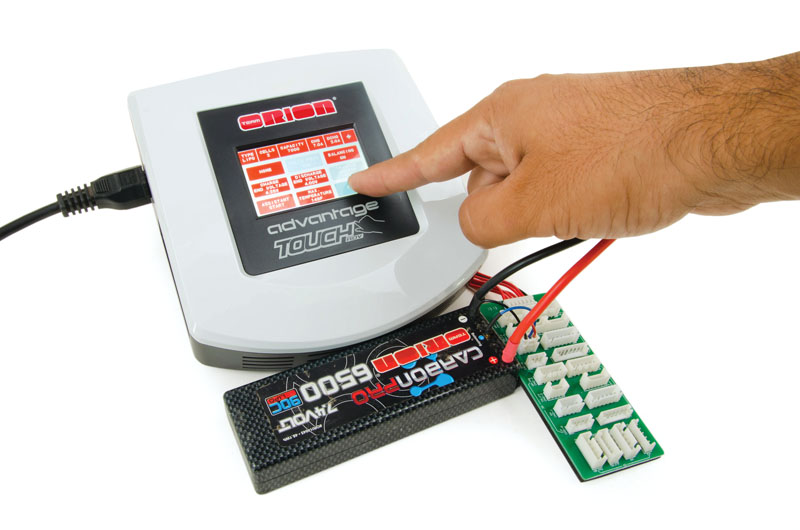 Chargers
Battery chargers come in AC/DC or DC-only varieties, with the latter requiring an external power supply (either an AC converter or large 12V battery, like that used for a full-size car). Chargers, like other important RC items, can be as simple (start/stop button) or complicated (multiple charge profiles, adjustable parameters, etc.) as you’d prefer. If you’ll be charging batteries of different chemistries (NiMH, LiPo, lead acid, etc.) or multiple batteries at once, or you want to monitor the charging cycle of your batteries to ensure peak performance for racing applications, you’ll be better off with a higher-level charger.

Batteries
Aside from the alkaline AAs that are often used to power a trans-mitter, RC batteries are separated into two groups: lithium-based (typically lithium polymer, or LiPo) and nickel-based (most often nickel-metal hydride, or NiMH). Because of their chemical makeup, LiPo batteries offer significantly better power and run time due to their lower resistance and higher discharge rates, but they require specific chargers and special care to be used safely. NiMH packs, however, are typically less expensive and don’t require special care. 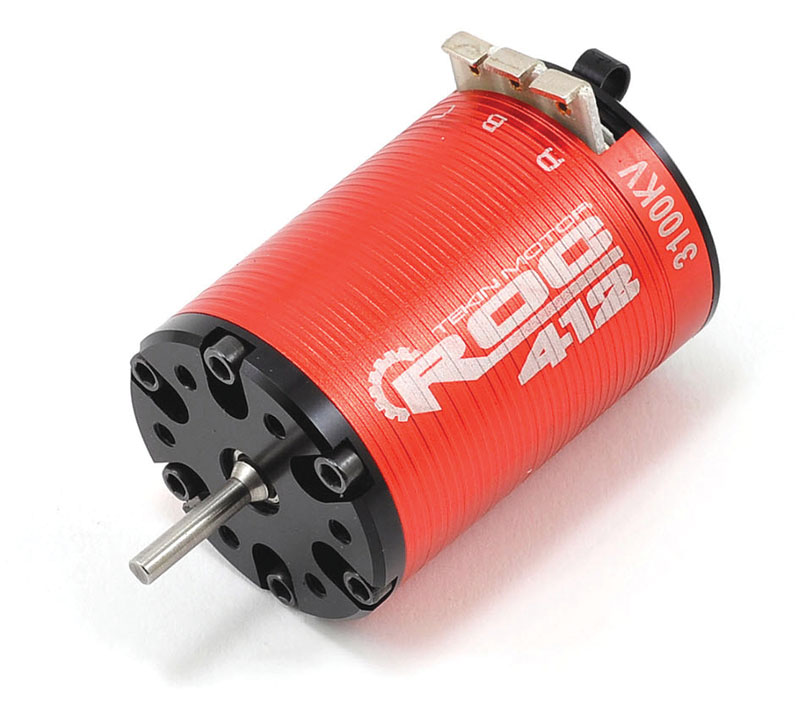 Motors
Whether brushed or brushless, an electric motor spins when powered by a battery and speeds up when more battery power is applied. Electric motors are typically rated in turns, which indicate the amount of wire wrapped around the armature (brushed) or stator (brushless); the lower the number of turns, the faster the motor. Though brushed motors are less expensive and still popular in basic RTR kits, brushless motors have become an increasingly common choice for their superior efficiency and lack of required maintenance.

Nitro – Put a real engine to work
If the sound of a blaring engine burning fuel and spitting out exhaust fumes is exciting to you, look into buying a nitro vehicle. You’ll need to be patient when learning to tune and maintain an engine, but the realism and thrill of a real engine screaming through its rpm range is something electrics don’t offer. 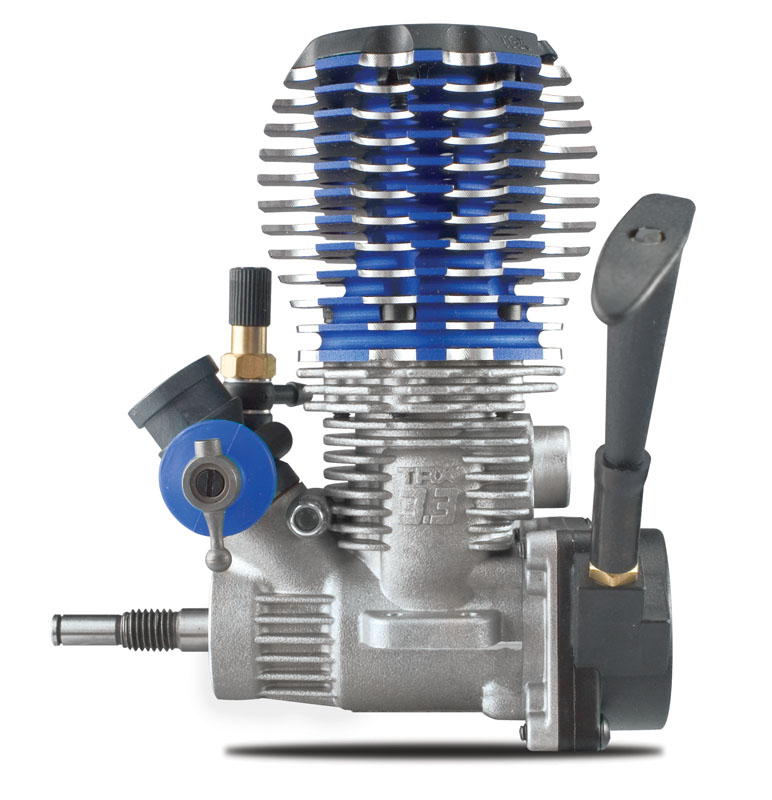 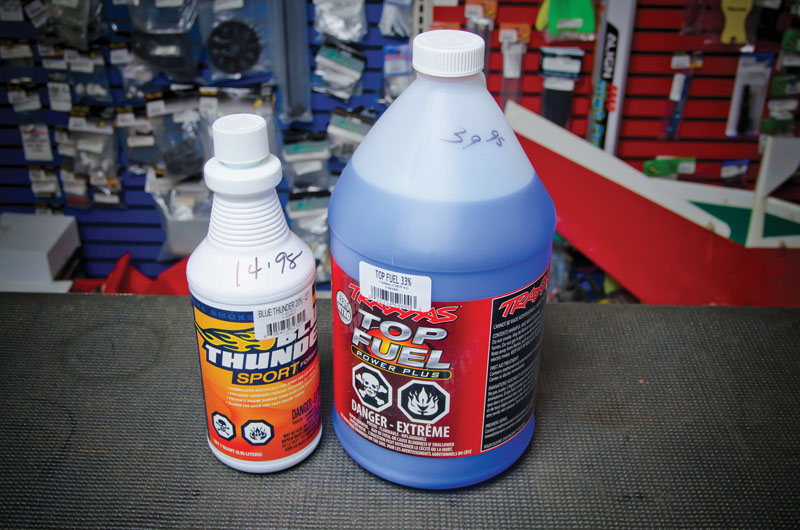 RC fuels
Hobby fuels specific to RC cars are made with a blend of nitromethane, methanol alcohol, and oil. The percentages of each ingredient are recommended by the engine manufacturer and can vary. Fuels with more oil can prolong engine life and give newer engine tuners more protection against premature failure, while racing-specific fuels use higher nitro and alcohol content to offer more power. 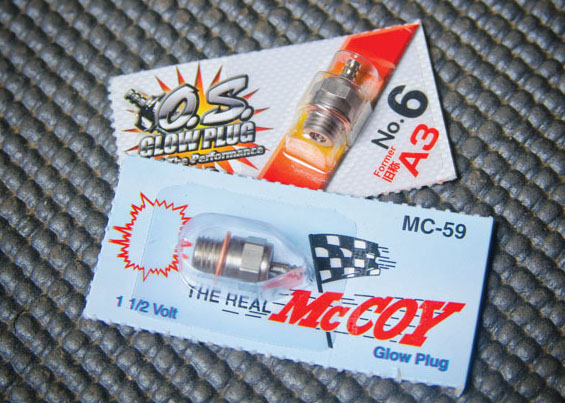 Glow plugs
Rather than an electronic ignition system and a spark plug, a glow plug is used to ignite the air/fuel charge under extreme compression. Glow plugs are available in varying heat ranges to correspond with engine type and fuel content. 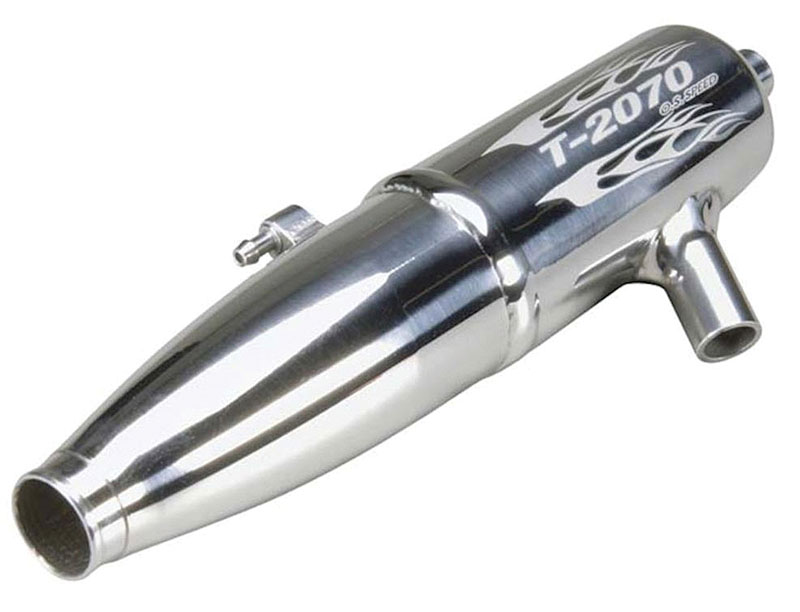 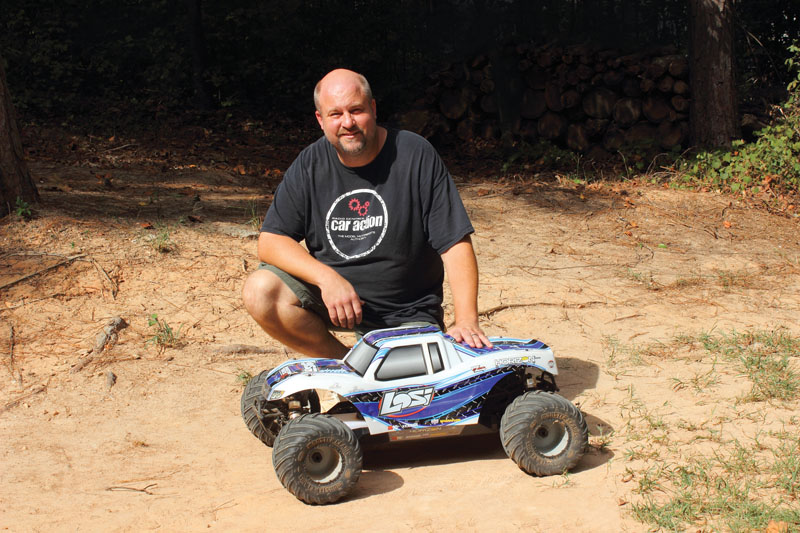 Going Gas
Fuel-burning cars are often called “gas cars” even when they burn nitro instead of gasoline. But there are RC models that burn pump gas! Massive 1/5-scale machines like this Losi Monster Truck XL are powered by what is essentially a chain-saw engine for super-size thrills—and a super-size price. Big gas burners start at about $1,000.

Would you believe this hot rod is actually a Traxxas Revo monster truck? Swapping bodies allows you to transform your car or truck into a variety of vehicles.

Bodies
Made out of clear Lexan and painted from the inside so that the paint looks shiny and is protected from impact, all RC cars have a body that’s clipped or otherwise fastened to the chassis. Some classes, like on-road touring cars and short-course trucks, use bodies that are fairly universal among cars within the same class, while other buggies and trucks must use bodies created for that specific platform. Many aftermarket companies make shells to fit different vehicles, but you can get nearly any body to fit any vehicle (within reason) with some creative trimming and reconfiguring the body posts. 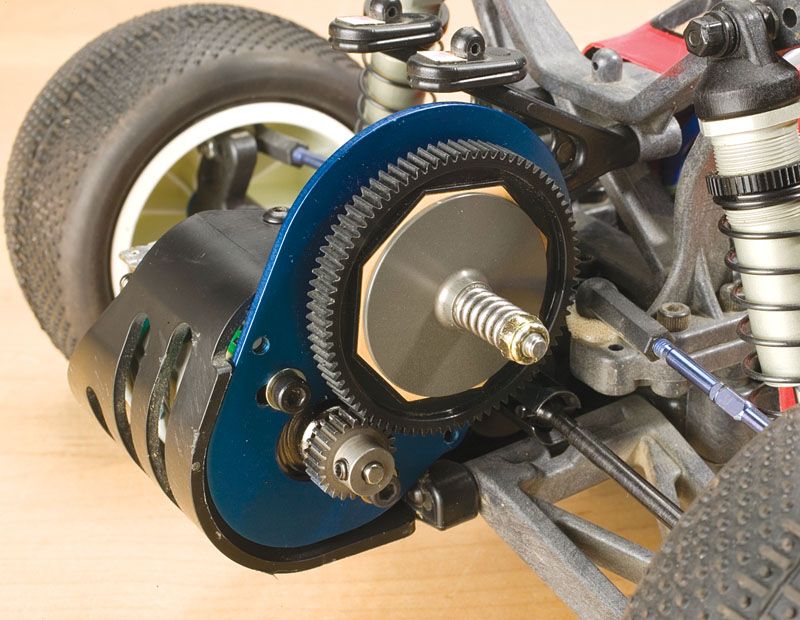 The pinion (small) and spur (large) gears can be changed to optimize the gear ratio for speed or efficiency.

Pinion and spur gears
The pinion and spur gears are the primary gear reduction on an RC car (combined with any internal transmission gears), and can be swapped for gears of different sizes to change the car’s acceleration rate and top speed. In addition to the number of teeth on the gears, tooth size and spacing (known as “pitch”) also vary. Consult your model’s owner’s manual to make certain that you purchase gears of the correct pitch; 48 and 32 pitch are the most common. 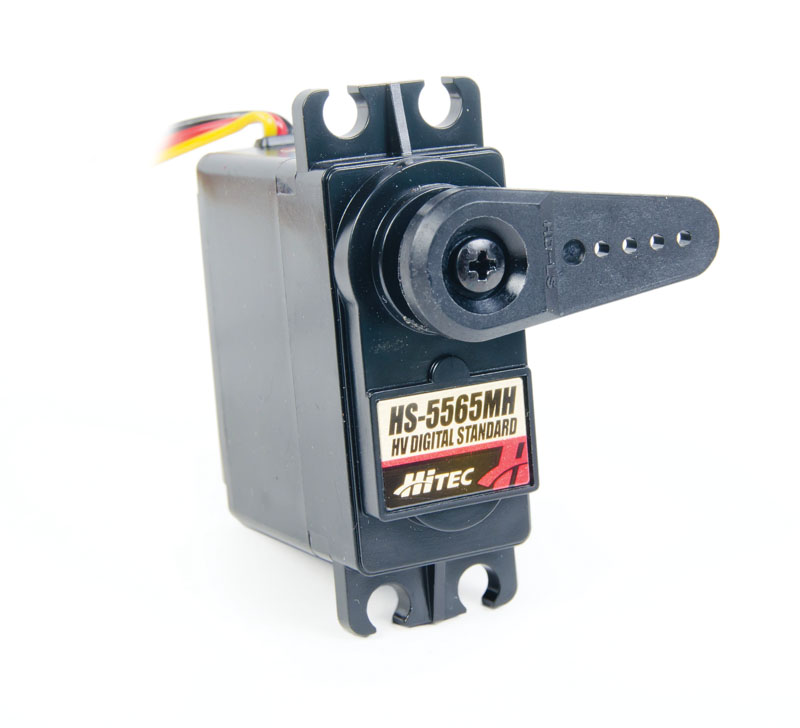 Servos
To wrestle the front tires to the left and right, a system of linkages and bellcranks connect the front suspension to a servo that receives its signal directly from the receiver. Inside the servo, a motor spins a network of gears, which, in turn, move the servo arm on top. Servos are made with a variety of gear materials (plastics or metals) and feature different internal gearing and motors to create servos that have different transit speeds (the time it takes for the servo to rotate 60 degrees) and torque (measured in ounces per inch, indicating how much weight the servo could lift using a 1-inch servo arm). 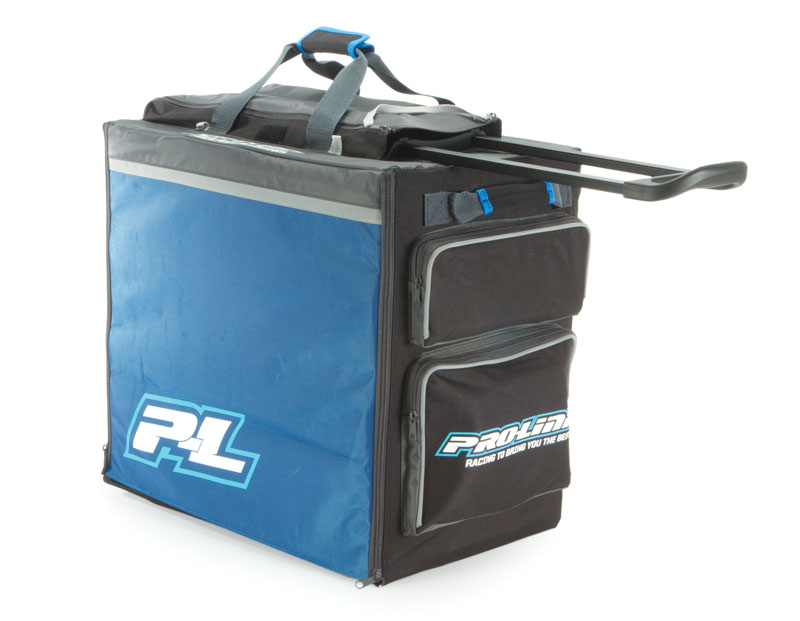 Pit bags
While an inexpensive plastic tub will suffice for transporting your equipment, dedicated RC’ers use pit bags to store, transport, and organize their gear. Pit bags range from a standard duffle bag to haulers with cardboard drawers, assorted pockets, wheels, and a long carrying handle.

Tires and Wheels
Just like full-size cars and trucks, there’s a seemingly endless variety of wheels and tires you can install to change up your vehicle’s style or to suit the terrain. Most RC tires are glued permanently to the wheels because that’s the only way they can stay on at high speed. An exception is scale off-road trucks, which are geared for torque rather than speed and often use “bead-lock” rims that clamp the tires into place. This allows the rims to be reused and fitted with different tires. Tires can be purchased unmounted for installation on the rims of your choice, or you can get “premounts” that are factory-glued and ready for action. 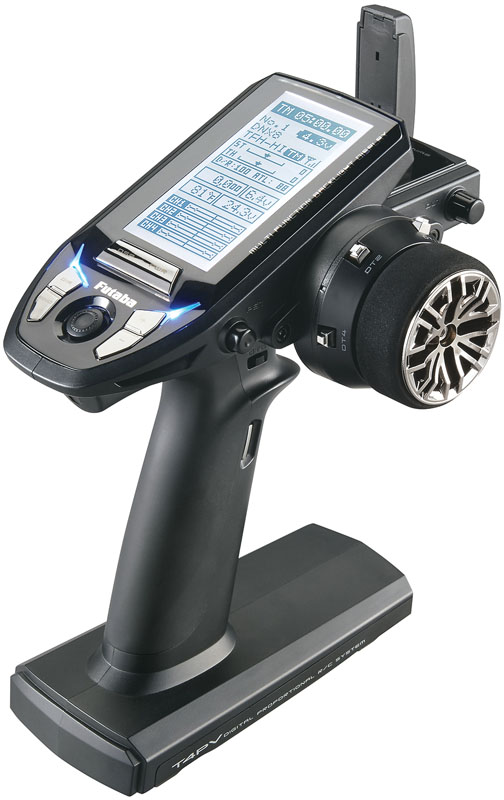 Radio systems
Without a transmitter and receiver, radio control would not be radio control. Radio systems for RC cars have at least two channels: one for steering and one for throttle/brake. Some models have three or more channels to control such functions as locking differentials and multispeed transmissions. Competition drivers often upgrade to transmitters with computer displays that allow greater adjustability and can store settings for multiple models. But to get started in RC, all you need is a basic unit.