Ask any RC fan to name the cars in their fantasy fleet, and you can bet they’ll tick off at least one 1/5-scale ride. Who can resist a super-sized RC car or truck that stretches 3 feet or more from bumper to bumper, with a 2-stroke engine liberated from a chain saw spinning the tires? As RC’s biggest, baddest machines, 1/5-scale cars offer a unique driving experience with a massive feel and incredible soundtrack that’s unlike anything else in RC. Ready to add a big gasser to your garage? Here’s what you need to know.

A 1/5-scale car isn’t the sort of thing you’d turn over to a nine-year-old and say, “Have at it,” but anyone you’d trust to drive a go-kart or operate a lawn mower can handle a 1/5-scale car. Because of their size and heft, 1/5-scale cars are docile handlers. They are no harder to drive than any other RC model, and may even be easier than many of today’s high-powered 1/10-scale RTRs. Big 1/5-scale machines don’t blast off instantly like brushless 1/10-scale cars, and they react more slowly to steering inputs. That said, you can still drive a 1/5-scale car right into the mailbox, and it will do a lot more damage when you hit it, so safety first. If you’re new to RC driving, choose a wide-open space with plenty of room to make mistakes without hitting something immobile. And never drive toward yourself or others—30+ pounds of RC car is not something to take lightly, no pun intended.

They’re not as expensive as you think

Make no mistake, a 1/5-scale car or truck is going to set you back at least $1,000, so “cheap” they ain’t. But unless you’re a total hammer, you shouldn’t consume much more than gas and oil, so 1/5-scale cars are pretty inexpensive to run once you get past the initial cost of getting your new ride into the garage. And $1,000 is probably less than you think it is, as far as RC expenses go. For example, you could easily spend a grand on a 1/8-scale buggy once you price out a kit, engine, radio gear, and starter box. And if you want race-spec stuff, you could spend $2,000 or more. You can get started in RC more affordably with a 1/10- or 1/8-scale model, but the cost of diving into big scale isn’t a lot more in the long run. 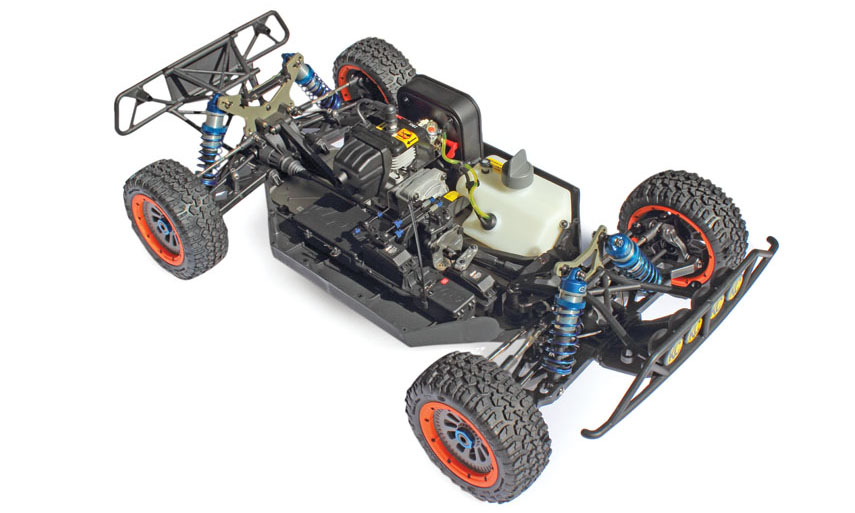 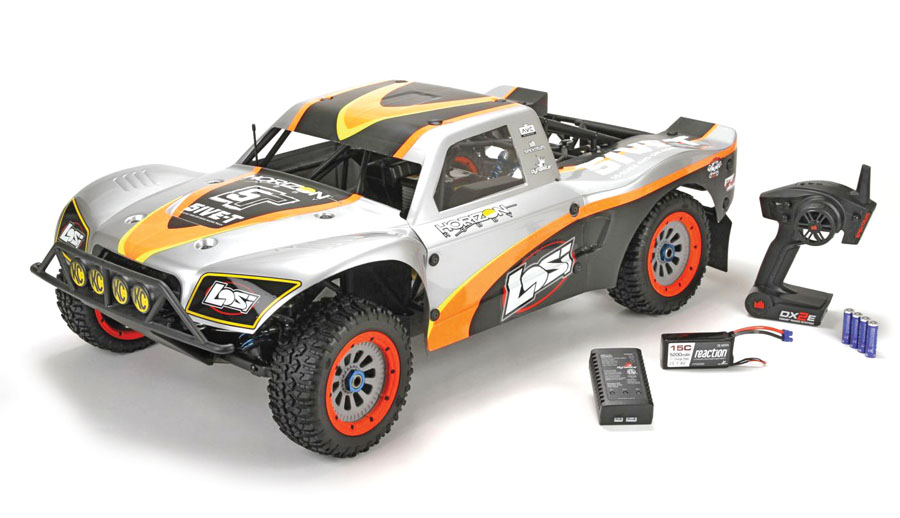 You’ll need to part with a wad of cash to get here, but you won’t spend a lot to keep your gas machine running.

They run on gas but not just gas

One of the biggest plusses for gasoline power is the low operating cost—gas is right around $2 a gallon these days. But before you fill the tank, you’ll need to mix the gasoline with oil. Two-stroke engines are lubricated by the oil mixed into the fuel, and “premix” oil is made specifically for the job. You can find premix oil wherever weed whackers and other 2-stroke lawn and garden tools are sold. Most 1/5-scale cars call for a 40:1 fuel-to-oil mixture ratio, but check your car’s manual before you mix. Most premix oil bottles are labeled, so you can see how much to pour into a gallon of gasoline to achieve the desired ratio. Be sure to mix and store gasoline only in approved containers, and never keep gasoline inside the house—store it in the garage or shed. 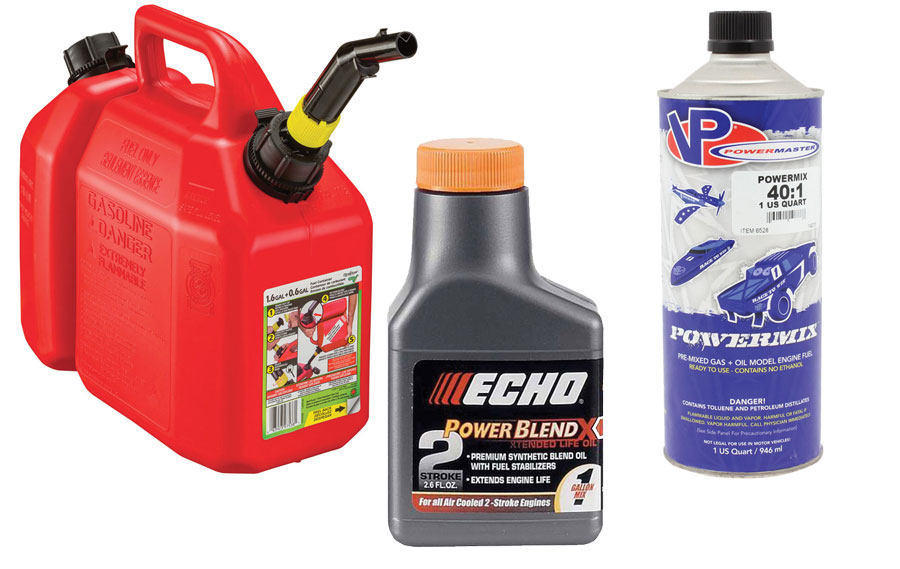 Left: Mix and store your fuel in containers designed for gasoline only.
Middle: Before you pour it into the tank, the gasoline must be mixed with premix oil so that the fuel can lubricate the engine as it runs.
Right: Don’t feel like mixing? You can get PowerMaster fuel, a blend of ethanol-free gas and premium synthetic oil designed just for RC engines. It comes in 25:1, 40:1, and 50:1 ratios, ready to pour into your tank.

You can put away that tuning screwdriver

The large-displacement gasoline engines used in 1/5-scale cars have adjustable mixture needles for the low-rpm range and high-rpm range as well as an idle-setting screw. But unlike nitro engines, the big gas burners don’t require tuning on every run. If you want the very best performance from your engine, tuning the mixture needles does affect performance. But if you’re not worried about getting every last rpm out of the engine (and especially if you’re afraid you might make it run worse), a quality gasoline engine will run reliably without run-to-run tuning. It’s just like a weed whacker—you don’t see landscapers tuning those up every day. 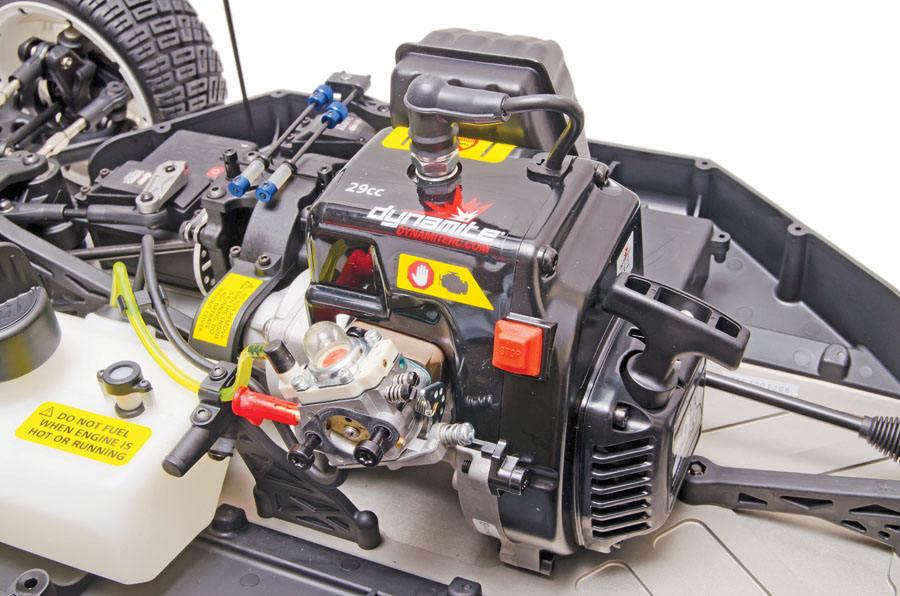 Below left: A 1/5-scale gas engine uses spark ignition and does not require every-run tuning. 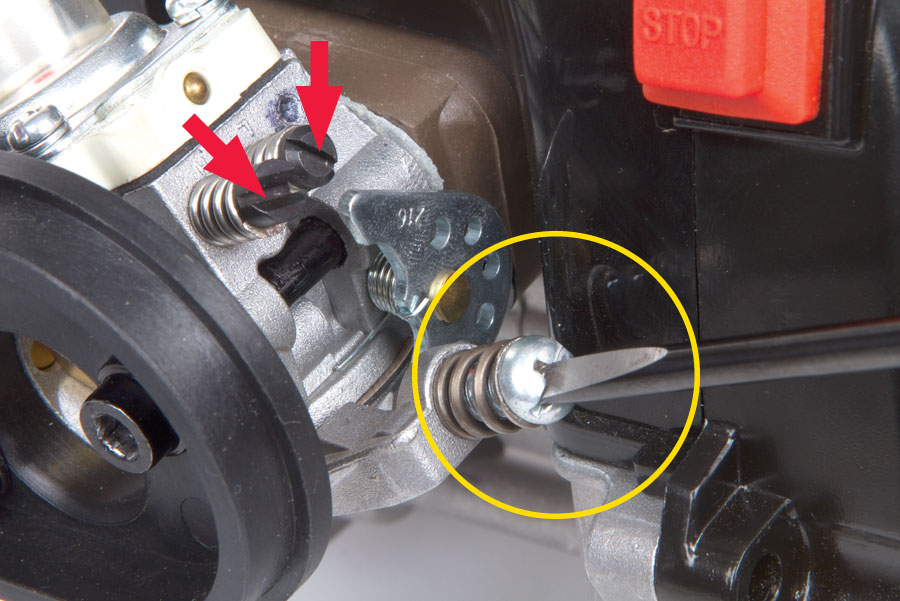 : Like a nitro engine, a gasoline engine has a high-end mixture needle (arrowed, left), a low-end needle (right), and an idle screw (shown here being adjusted).

With run times stretching past 40 minutes and heavy-duty servos working the linkages, 1/5-scale cars demand a lot of their receiver packs—four AAs isn’t going to cut it. Instead, the big rigs use 5-cell Sub-C NiMH packs (the same NiMH cells used to power 1/10 electric cars) or 2S LiPo packs. Don’t just plug a 2S LiPo receiver pack into your 1/5-scale car without checking the specs for your radio gear first—not all receivers and servos are rated for 7.4 volts. Unless the radio gear is specifically approved for 7.4-volt operation, stick with a 6-volt (5-cell) NiMH pack. 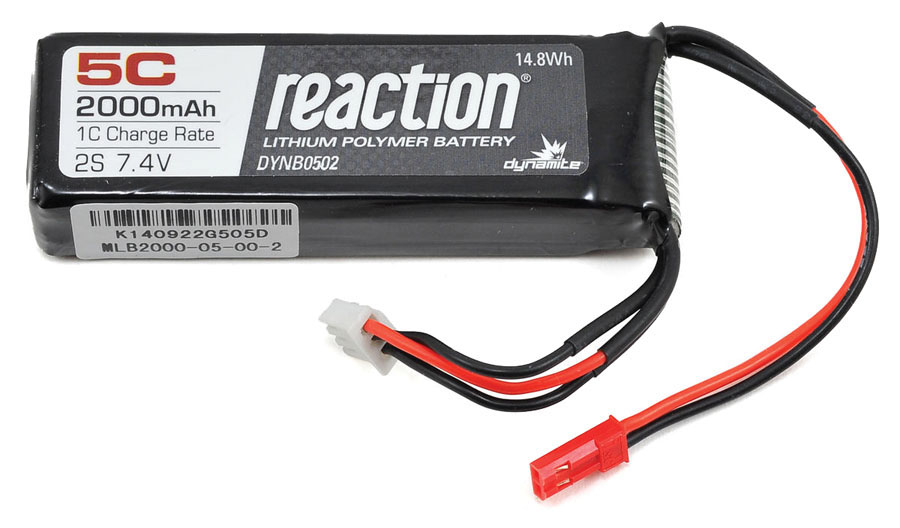 Four AAs aren’t going to cut it; 1/5-scale cars use “full-size” NiMH cells or a high-capacity LiPo pack to power the onboard gear.

How fast do they go?

Out of the box, a 1/5-scale RTR will do about 35-40mph. That may sound slow compared to hot 1/10-scale RTRs, but a 3-foot-long, 30-pound RC car hammering the terrain at 35mph gives a much different impression of speed than a 1/10-scale car, and “Can it go faster?” is usually the last comment you’ll hear. As with any RC car, you can make mods to go faster, but hot-rodding the big engines can get expensive. What most gas cars need more than a speed boost is improved torque; a tuned pipe will give a “weed-eater” engine a lot more snap off the line, which does far more for creating a stronger impression of power than just adding a few more mph to the top end. 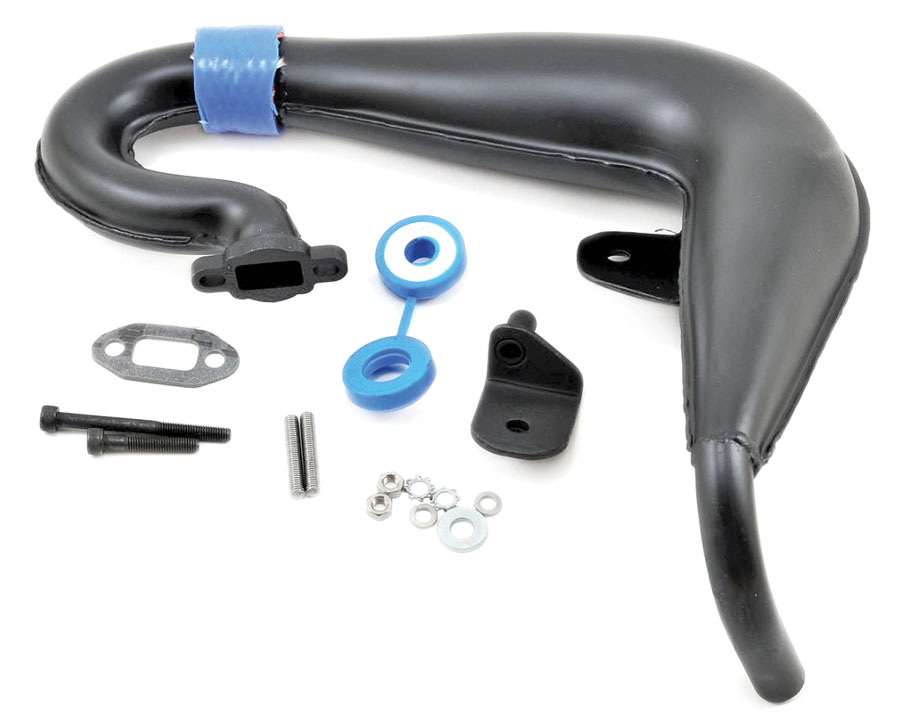 Most RTR gassers are equipped with a box muffler, which isn’t great for throttle response. Swapping the muffler for a tuned pipe can dramatically improve performance. 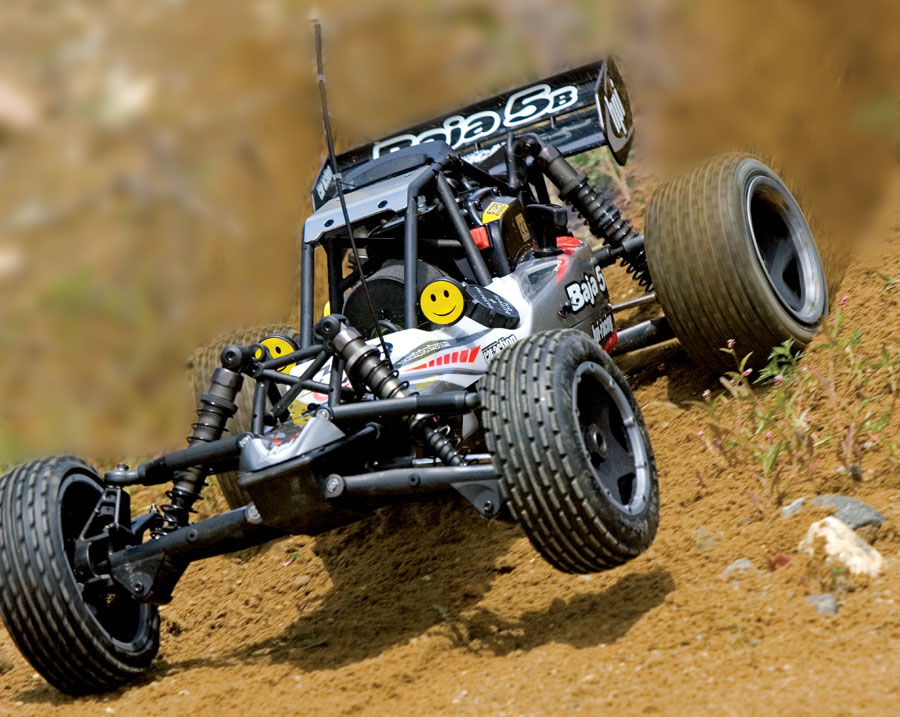 Twice the size doesn’t mean twice as fast. An out-of-the-box 1/5-scale RTR will top out under 40mph.

Will high-octane gas give my engine more power?

Short answer: no. A fuel’s octane rating tells you how much the fuel-air mixture can be compressed before it ignites on its own. High-performance engines generally have higher compression, which is why they require high-octane fuel. Igniting the fuel-air mixture at the proper time is critical for maximum power and performance, and the extra octane prevents the fuel mixture from self-igniting before the spark plug can ignite the mixture at the ideal time. Using higher-octane fuel than your engine requires will not improve performance unless the engine is optimized for it. All the 1/5-scale models we’ve run across are designed to run on “regular” gas, so you can save a few cents at the pump and stick with the low-octane stuff. 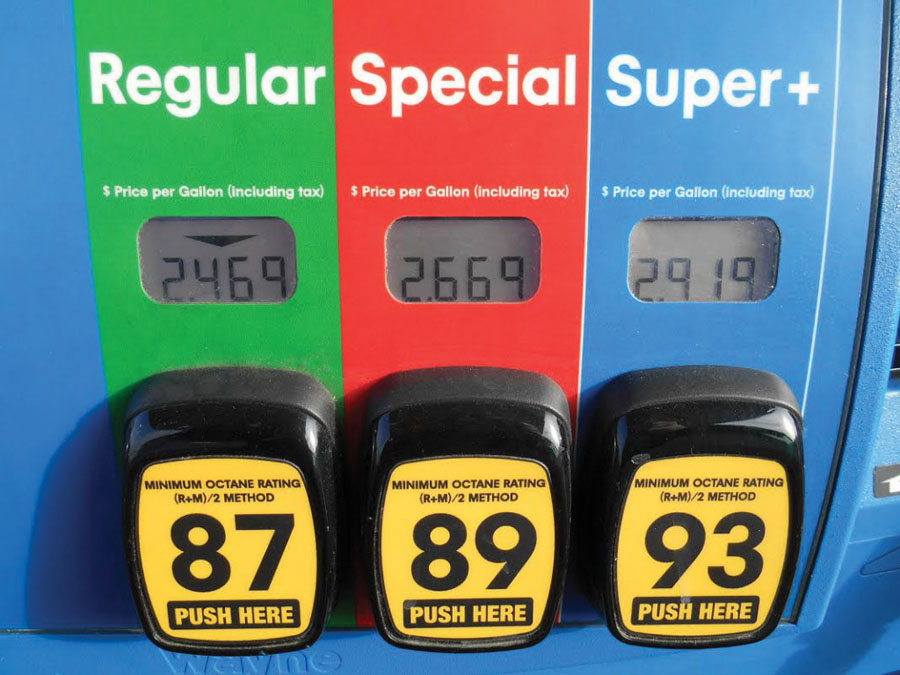 Maintaining a 1/5-scale car isn’t much different than keeping a smaller car in good running shape. You’re going to inspect it after each run, chase down any loose screws or parts, keep the air filter cleaned and oiled, and rebuild the shocks and diffs as required. One thing to keep a close eye on is clutch wear. If you do a lot of partial-throttle driving, the clutch will be slipping more frequently and that leads to wear. If you’re not paying attention, you can wear the shoes down to bare metal without even noticing—the clutch will still work, but you’ll be tearing up the clutch bell. It’s also wise to periodically remove the shroud that covers the engine so that you can clean dust and debris out of the cooling fins under the shroud on the engine. Any junk in the fins will act as insulation and reduce cooling, so get it out of there. 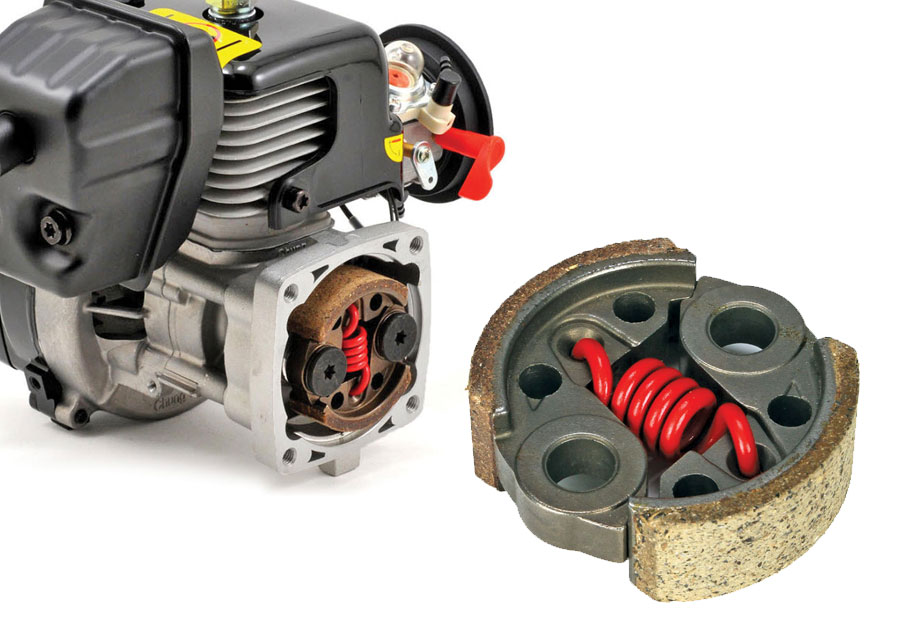 It sounds backward, but the clutch will last longer if you keep the revs up so that the shoes lock against the clutch bell. If you do a lot of low-rpm cruising, clutch slip will eat up the shoes. 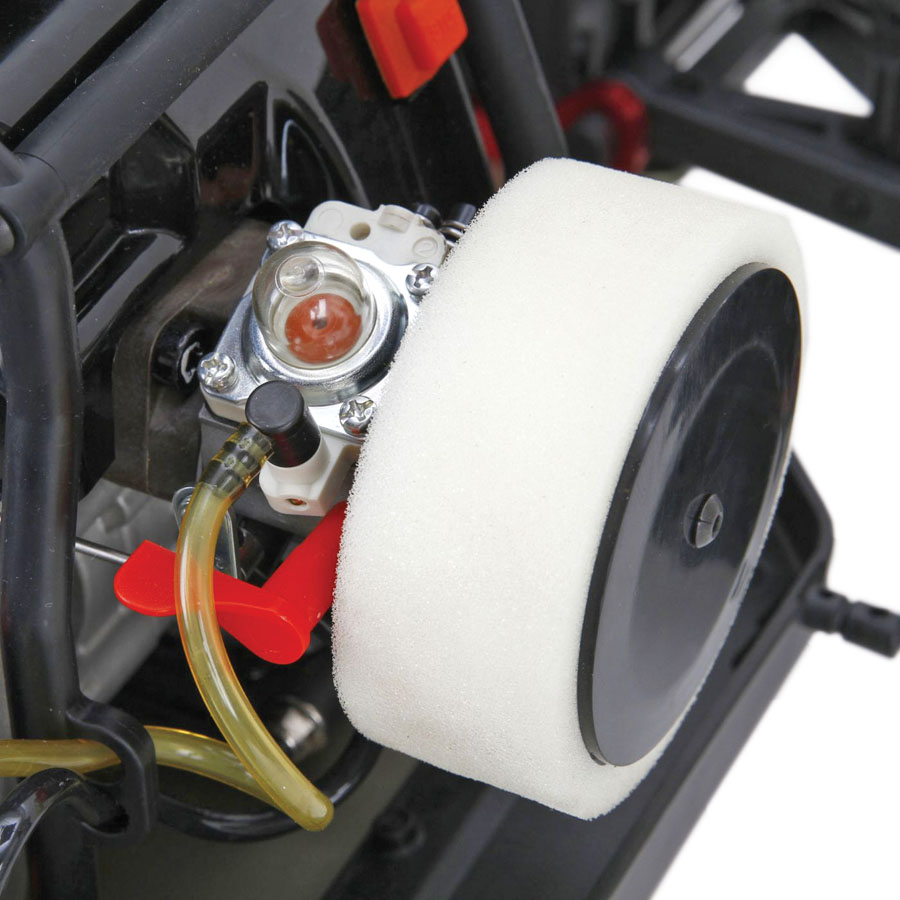 Keep the air filter cleaned and oiled for the best performance—and that goes for any engine.

There are only two reasons not to go for big-scale gas: You don’t have the dough (we feel you), or you don’t have the space. If those aren’t hang-ups, by all means, bust out that fat stack and get a 1/5-scale car. The extra size translates into extra fun, not extra complexity or work compared to smaller cars of similar design. And if you’re already a nitro fan, you’ll find 1/5-scale cars are a more laid-back way to get your fuel-power fix—at least as far as engine tuning goes. Have fun, and share photos of your super-sized ride so that we can get it in the mag; send your photos to ReadersRides@airage.com!

By The RC Car Action team