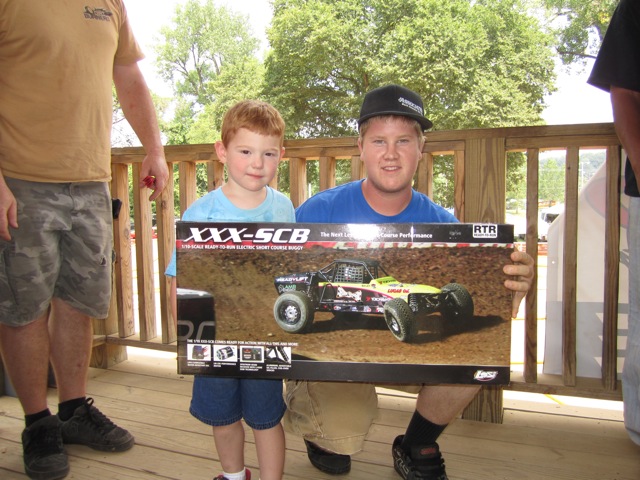 Sunday’s racing action was wicked as people and gear battled against the high temperatures and humidity, as well as the close wheel-to-wheel track action.  Engine flameouts were unfortunately a part of the game today, as the weather seeming to make it difficult for driver to keep the fires lit.  It was a long, busy day for the pit crews out there.  Pro class run two, 20 minute double A Main heats, with Expert and Sportman running a single, 30 minute A main.  B mains would be 20 minutes, and all others 10 minutes.  All of the mains (accept Pro) provided two bump up positions.

The Dash For Cash is a fun element that’s unique to the Futaba / OS Engines Nitro Challenge.  This qualifier of sorts takes the top 6 qualifiers from the Pro Buggy group, and the results from this determine the starting order for their first of two A Main events.  Here’s where it gets good…the start is inverted!  By that, the Top Qualifier lines up in the 6th position, while the 6th ranked qualifier starts 1st.  Add to that, this heat is a total of 7 laps.  You read that right…seven LAPS, not minutes.  Winner of the heat not only starts first in the 1st A Main race, but they take home a cool Benjamin.  If that racer also uses a Futaba radio and an OS engine…bonus, an additional $25.  Pretty fun way to mix things up, and all the racers (competing and spectators) really enjoyed the action.

Ryan Lutz seemed to own the weekend.  Ryan’s had great results here in the past, with a TQ and win in both Pro Buggy and Pro Truggy classes last year.  In speaking with Lutz, he spoke of how he really enjoys the Dirt Burners track and the facility as a whole.  He also acknowledged the extra challenges this event has, with two, twenty minute A Mains for the Pro category.  Ryan said he’s quite busy wrenching on his rides to prep them for multiple mains.  Ryan also showed off a pretty trick new exhaust setup from Alpha.  The pipe comes with three different threaded exhaust tips that can be swapped to tweak the tune of the engine.  Super trick!

Alpha Plus A852 engine

The Dirt Burners crew is club based group with about 35 active members.  They hold 2-3 big races a year, with the Futaba / OS Engines Nitro Challenge being the premier event. This club, lead by Colton Kiefer and Chris Conwell, has successfully worked in cooperation with the city of Kirkwood to build a great home for their track.  The Dirt Burners track is located adjacent to a golf course, bike path, and baseball diamonds.  This creates all kinds of casual spectators coming by to watch the action.  Unfortunately, the track also lies quite close to a river that regularly (or rather, consistently) floods.  The Dirt Burner gang pushes thru this, even if it means they have to remove and replace all the electricity hardware when nature decides it’s time for high tide.  This is a group that’s committed to our hobby, and their hard work shows.

This is the third year that Futaba & OS Engines are the title sponsor of the Nitro Challenge at Dirt Burners, so it only makes sense that the crew from Hobbico are on hand.  In talking with them, they spoke highly of not only the Dirt Burners club, but also the attending racing community.  It’s clear the commitment to racing is strong in this region, and having a solid, annual event on the calendar like this is a great one for everyone to look forward to.  This is the third year Hobbico has held this race at Dirt Burners, and enjoys watching it grow. 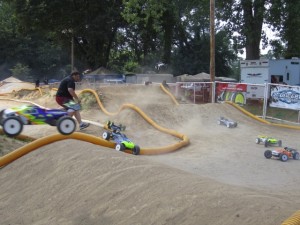 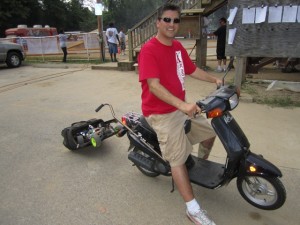 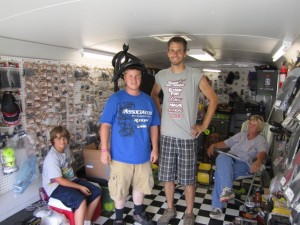 Inside the RJS trailer, Michael Paige models some new headgear alongside Ryan Lutz. 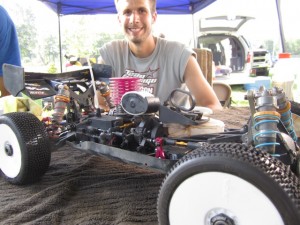 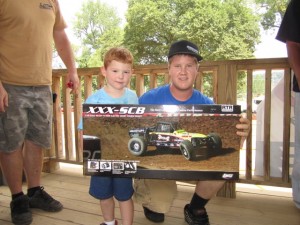 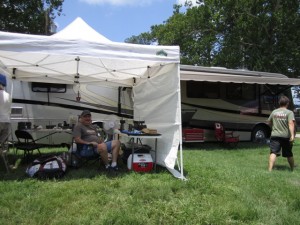 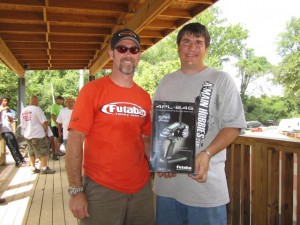 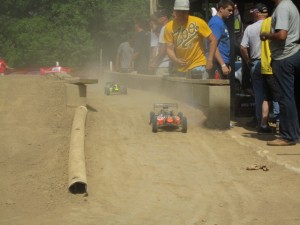 Action in the pits.