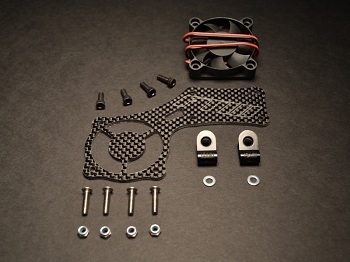 FTW RC is a newer aftermarket company which until now has only offered race inspired RC bodies.  Today the have launched their new line of carbon fiber upgrades and have released 3 products for the Losi TEN-SCTE 4WD Short Course Truck.  Check out the info below:

“Since our inception we have intended to expand our offerings to include upgrade parts for various RC platforms,” said FTW co-founder John Riewe. “After extensive testing and research we are excited to bring introduce our first carbon fiber components, and we can’t think of a better way launch FTW carbon fiber than with kits for Losi’s red-hot TEN-SCTE.” FTW co-founder Joshua Riewe added “FTW is all about form and function that defies convention, and the ‘function’ part of the equation is especially important to us as purveyors of racing components. These upgrades are pure performance enhancers.”

FTW’s cooling fan kit includes a carbon fiber bracket which replaces the center diff brace and suspends a massive 40mm cooling fan over the motor can. The kit can lower motor temps by up to 40 degrees versus the same setup with no fan, producing side effects like increased power, longer run times, and enhanced longevity. It includes a JST connector on the fan wire lead and all necessary hardware for installation.

If you like this article, check out this additional article on FTW RC.