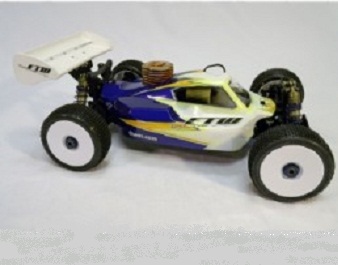 FTW Racing Components today inaugurated their new line of bodies for 1:8 scale off-road buggies with the introduction of fitments for Team Associated’s RC8B and X-Ray’s 808. In keeping with their stated commitment to create products exhibiting form and function that defies convention, FTW with this product launch enters the 1:8 scale arena with the same dramatic styling, exceptional performance, and uncompromising quality that has gained notoriety in the 1:10 scale market.

“Since the inception of FTW we’ve been eager to bring 1:8 scale bodies to market. Over the past two months our prototype bodies for RC8B and 808 have undergone testing at national races, with excellent results for our test team,” said FTW co-founder Joshua Riewe. “We are excited to finally release them to the public.” Regarding the styling of the new bodies, FTW co-founder John Riewe explained that “the stealth-inspired Night Fox design language we introduced with our B4.1 body is something we wanted to continue working with, and the the dimensions of the RC8B and 808 provided a perfect opportunity to apply that language on a larger scale. The balanced handling characteristics we saw with the Night Fox for B4.1 have translated to both 1:8 scale fitments as well.”

FTW plans to expand its 1:8 scale buggy lineup to include fitments for other popular platforms.