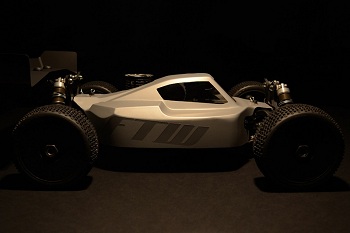 FTW (For The Win) has expanded on their popular Night Fox body line to now include the Mugen MBX6R 1/8 nitro buggy. Read the press release below for all the info:

FTW Racing Components today added to its 1:8 buggy lineup with the introduction of the new Night Fox body for Mugen’s MBX6R. The newest Night Fox exhibits same the proven handling characteristics and striking stealth-inspired styling for which FTW is known.

“As you will see, with the Night Fox for MBX6R we’ve maintained all that has made the Night Fox series popular—the stability and downforce it adds to the handling of the car, the quality, durability, and of course the stealth-inspired styling,” said FTW co-founder John Riewe. “Plus, Night Fox’s low roof line leaves more of the engine head exposed for better cooling without making the car look like a truck,” added FTW co-founder Joshua Riewe.

FTW will continue to expand its 1:8 scale buggy lineup to include fitments for other popular platforms.

Night Fox for MBX6R is packaged with window masks and a decal sheet.

If you like this article, check out this additional article on FTW.