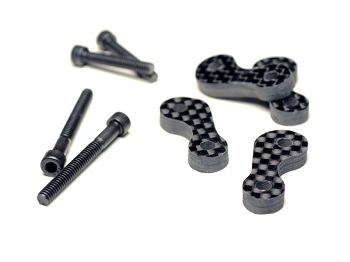 These new carbon fiber option parts will give you more tuning options for your 1/8 TLR ride. Check out the press release below for more info:

FTW Racing Components today added to its lineup of carbon fiber upgrades with the release of its wing spacer kits for Team Losi’s 8ight series of 1:8 off-road cars. Testing has shown performance gains can be realized by fine tuning the orientation of the wing. FTW’s mount mount spacer kit creates additional wing tuning options through the use of pairs of spacers which can be placed between the rear shock tower and wing mount. The kit include two pairs of 4mm-thick carbon fiber spacers, allowing the wing mount to be moved 4mm or 8mm away from the rear shock tower. Longer screws are supplied with the kit to facilitate proper fastening of the wing mount.

If you like this article, check out this additional article on FTW.