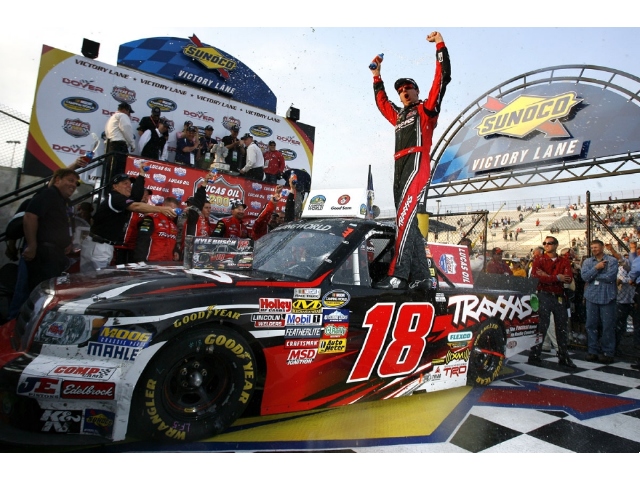 Kyle Busch led 128 of the 200 laps at Dover International Speedway en route to his third NASCAR Camping World Truck Series victory of the season. Busch, who held off a strong challenge late in the race from rookie Cole Whitt, won for the fourth time in as many races with Traxxas as the primary sponsor on his No. 18 Toyota since “The Fastest Name In Radio Control” came on board in the middle of last season. The win was also the fourth in six races for Kyle Busch Motorsports (KBM) in 2011, helping the defending owners’ champions stretch their lead in this year’s standings to 49 points.

“The Traxxas Toyota Tundra was awesome today,” said Busch “Eric and the guys did a great job. We brought back the same truck from last year and it was really fast again. This time around we were able to seal the deal and bring home the Monster trophy. I led a lot of laps the last few years in the truck series here and probably should have about five wins in a row. Cole Whitt gave us a run for our money late in the race, but I was able to slowly reel him in. We were just a little bit faster than him through turns one and two and I was able to get by him and hold him off those last few restarts. This win makes it four for four with Traxxas on the truck – that’s pretty cool.”

Busch, who started the race from the third position, communicated to crew chief Eric Phillips that he was battling a loose-handling Traxxas Tundra as Kevin Harvick paced the field in the early stages of the race. A J.R. Fitzpatrick crash on lap eight brought out the first caution of the day and erased Harvick’s lead.

Busch and Harvick drove side-by-side into Turn one on the restart but down the backstretch Harvick remained on point. Busch eventually made his way past Harvick on lap 18 and slowly began to pull away from the field as the race continued under green flag conditions.

Busch stretched his lead on the field to 10-seconds when he came made a scheduled green-flag pit stop on lap 125. The KBM crew put on four fresh tires on the No. 18 Traxxas Toyota, made a trackbar adjustment, filled it with fuel and returned their driver to the race track.

With several teams on different pit cycles, Busch was scored in the 13th position, one lap down, when he returned to the track. The winner of the inaugural truck race at “The Monster Mile” resumed a seven-second lead when pit stops cycled through on lap 153.

Debris on the track brought out the fifth caution of the race on lap 156. Busch brought his No. 18 Traxxas Toyota down pit road for the final scheduled pit stop of the day. The KBM crew put on four fresh tires, filled it with fuel and returned their driver to the track.

Jason White and Cole Whitt both elected to take two tires, leaving Busch in the third position when the race restarted on lap 161. By the time the field got back to the start finish line, Whitt had overtaken White for the race lead. The rookie opened up a five-truck length lead on Busch as the race headed into the final stages. On lap 178, Justin Lofton spun on the frontstretch and made contact with the inside wall bringing out the sixth caution of the race.

Whitt chose the outside line when the race went back to green-flag conditions on lap 183 leaving Busch, widely-regarded as “The King of Restarts”, the inside lane. The veteran and the rookie battled side-by-side into turn one, but the veteran regained the lead down the backstretch.

Shortly after regaining the lead, the seventh caution of the race slowed the field once again. Busch choose the inside lane for the restart on lap 185 and after another side-by-side battle into the first turn, cleared the young driver down the backstretch. Parker Kligerman, who was running in the top five, brought out the caution on lap 193 setting up a green-white-checkered finish.

Busch once again held serve on the restart and had opened up a five-truck length lead on Whitt when the final caution of the race occurred shortly after the No. 18 Traxxas Toyota took the white flag, ending the race under caution per NASCAR rules. The win tied Busch with Mark Martin for fifth all-time with 96 career wins in NASCAR’s top three series.

Busch will be looking for his third consecutive NASCAR Camping World Truck Series victory of 2011 next Friday, May 20, when the series heads to Charlotte Motor Speedway for the running of the N.C. Education Lottery 200. Kyle Busch will race with Traxxas again on August 20 at Michigan International Speedway and November 4 at Texas Motor Speedway.

Traxxas congratulates Kyle and the entire Kyle Busch Motorsports team on their fourth win with The Fastest Name In Radio Control. Be sure to watch Kyle and Traxxas at Michigan International Speedway and Texas Motor Speedway as the NASCAR Camping World Truck Series continues!