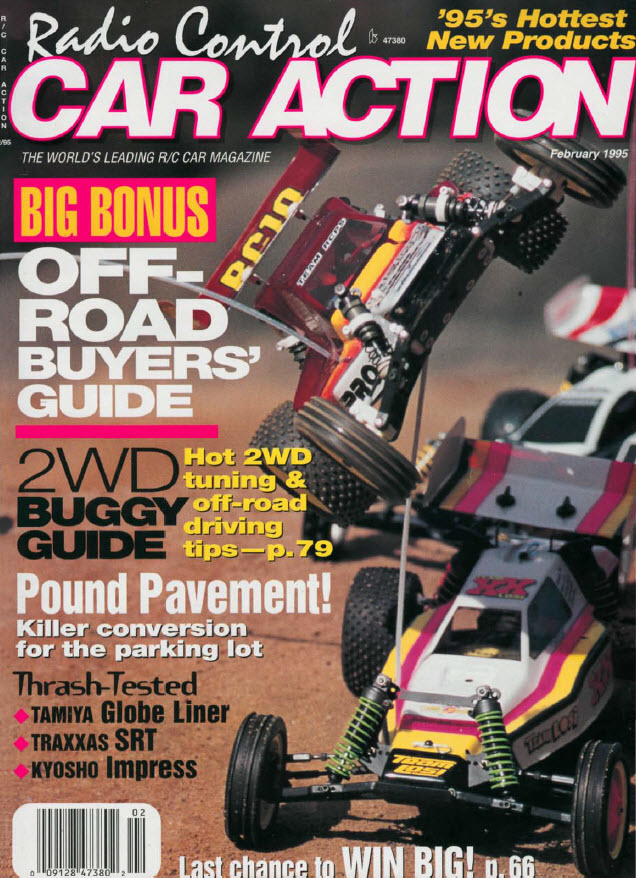 Wow, was it really 21 years ago that Coolio was on top of the charts and Die Hard was only on the third movie? Yep, looks that way. As for RC Car Action, our February issue was bursting with buggies…and other cool stuff. 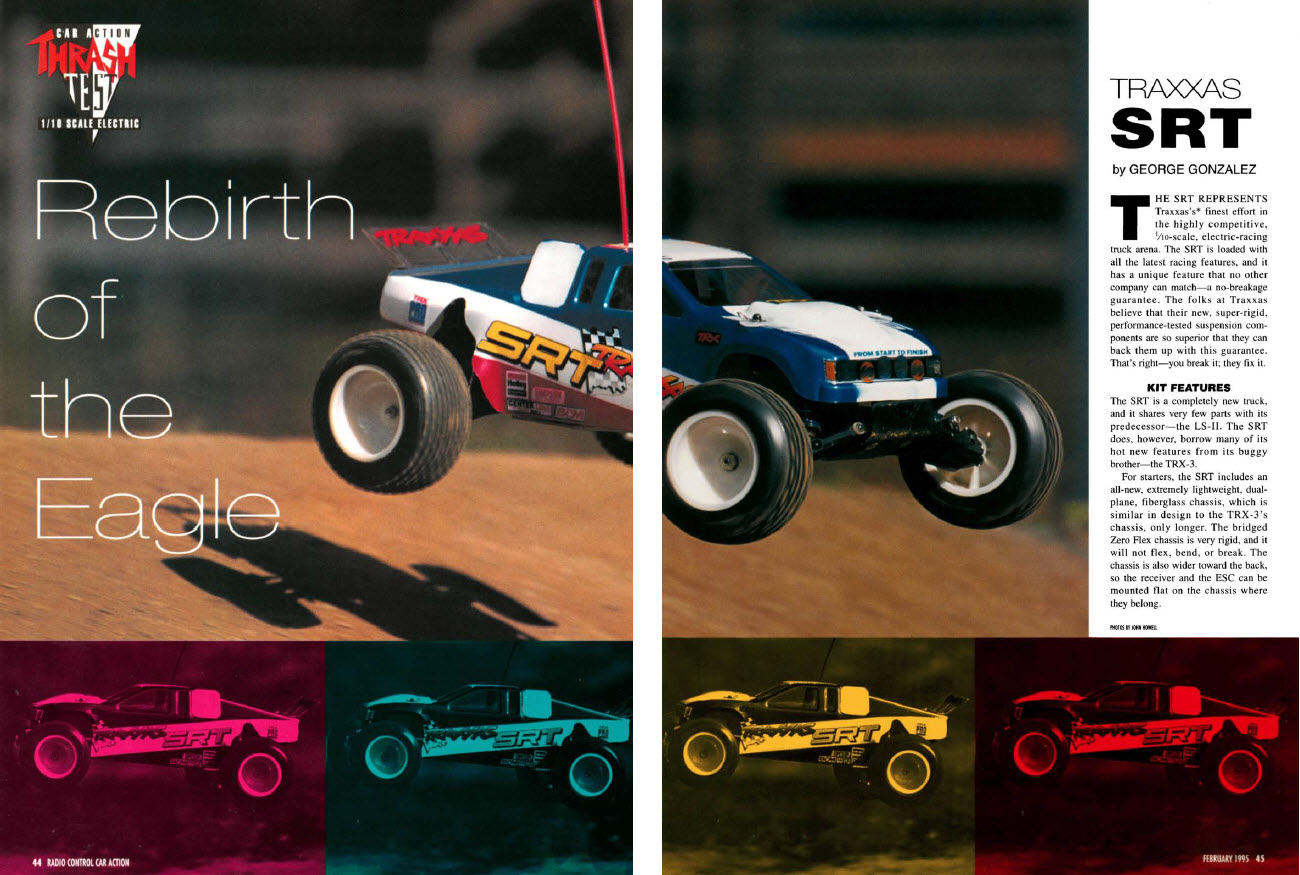 The SRT was Traxxas’ last truck to be offered expressly for racing, and was sold only as a kit. It still looks good today with its double-deck plate chassis, and much of the SRT lives on in the Rustler. 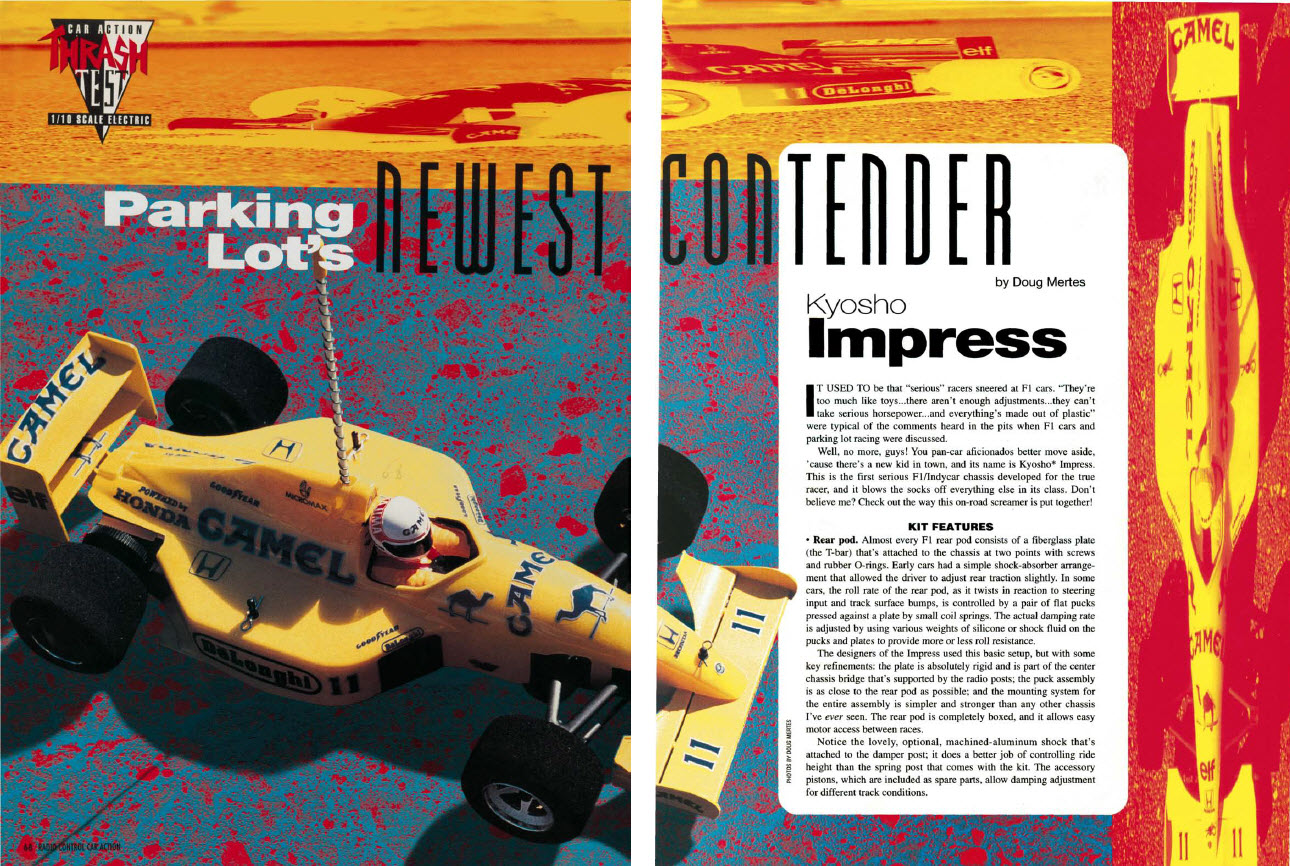 Touring cars would soon take over the scene, but in early 1995 F1 still ruled parking lot racing. Kyosho countered Tamiya’s F-series cars with the Impress, which we thought was a pretty sweet machine. Hard to find these nowadays. 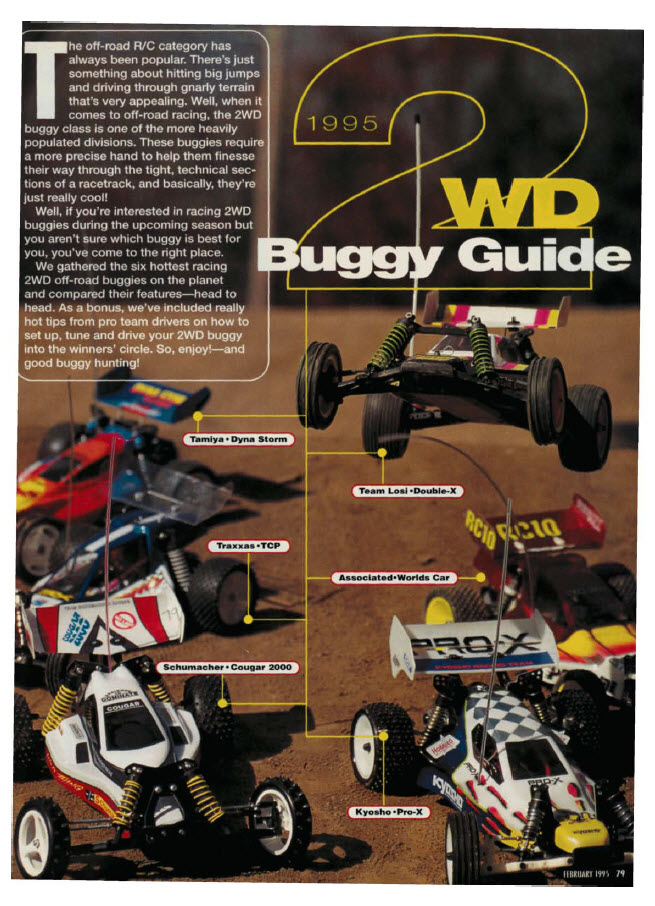 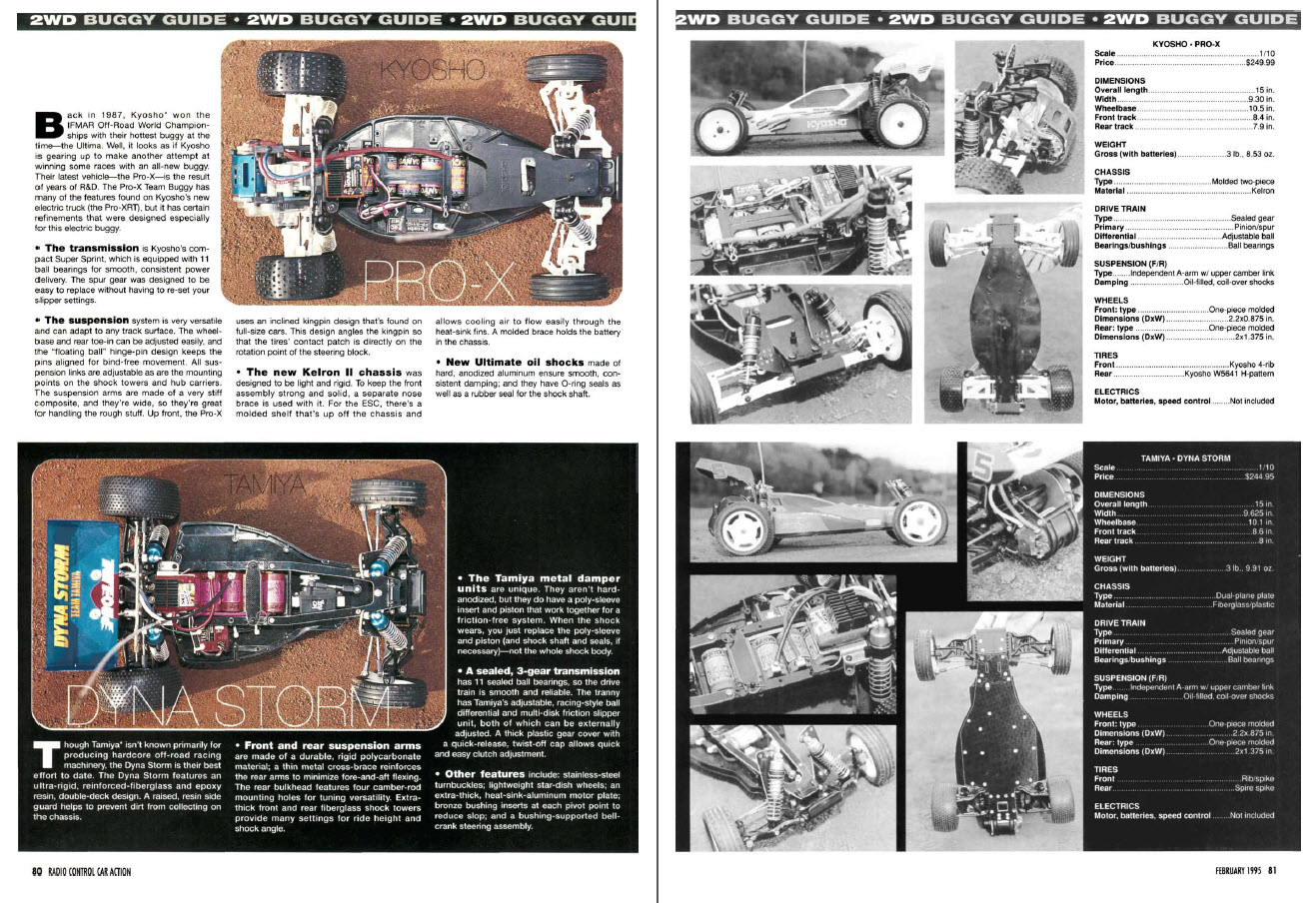 Chances are you did not see a lot of Kyosho Pro-X and Tamiya Dyna Storm buggies at your local track. Cool cars, but if you were racing, odds are you drove one of the two buggies on the next spread. 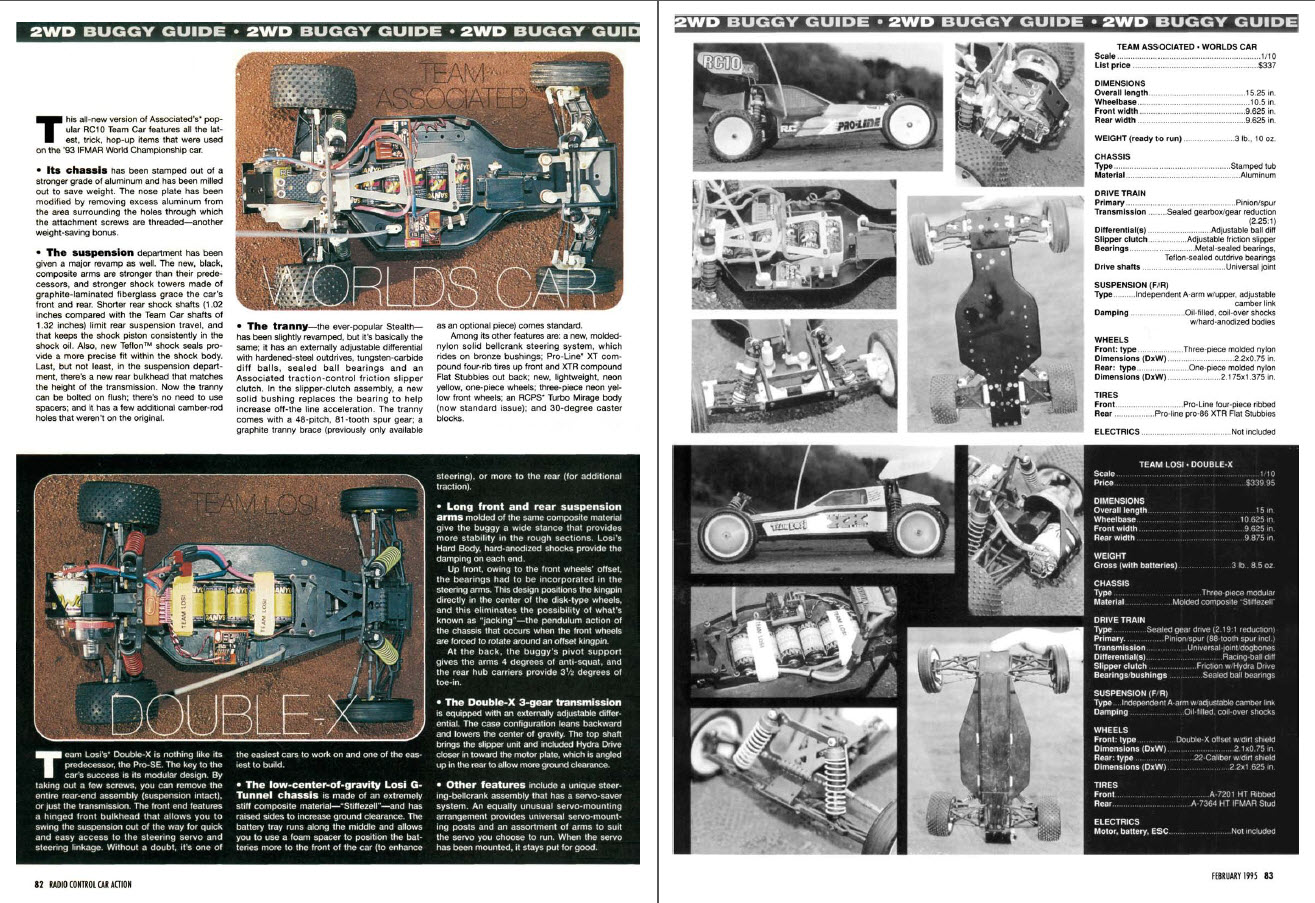 Losi’s breakthrough Double-X was the hot buggy in 1995. Associated would debut the RC10B2 later in the year, but for this issue the aluminum-tub RC10 was still going strong in Worlds Car trim (which you can buy now as a re-release) 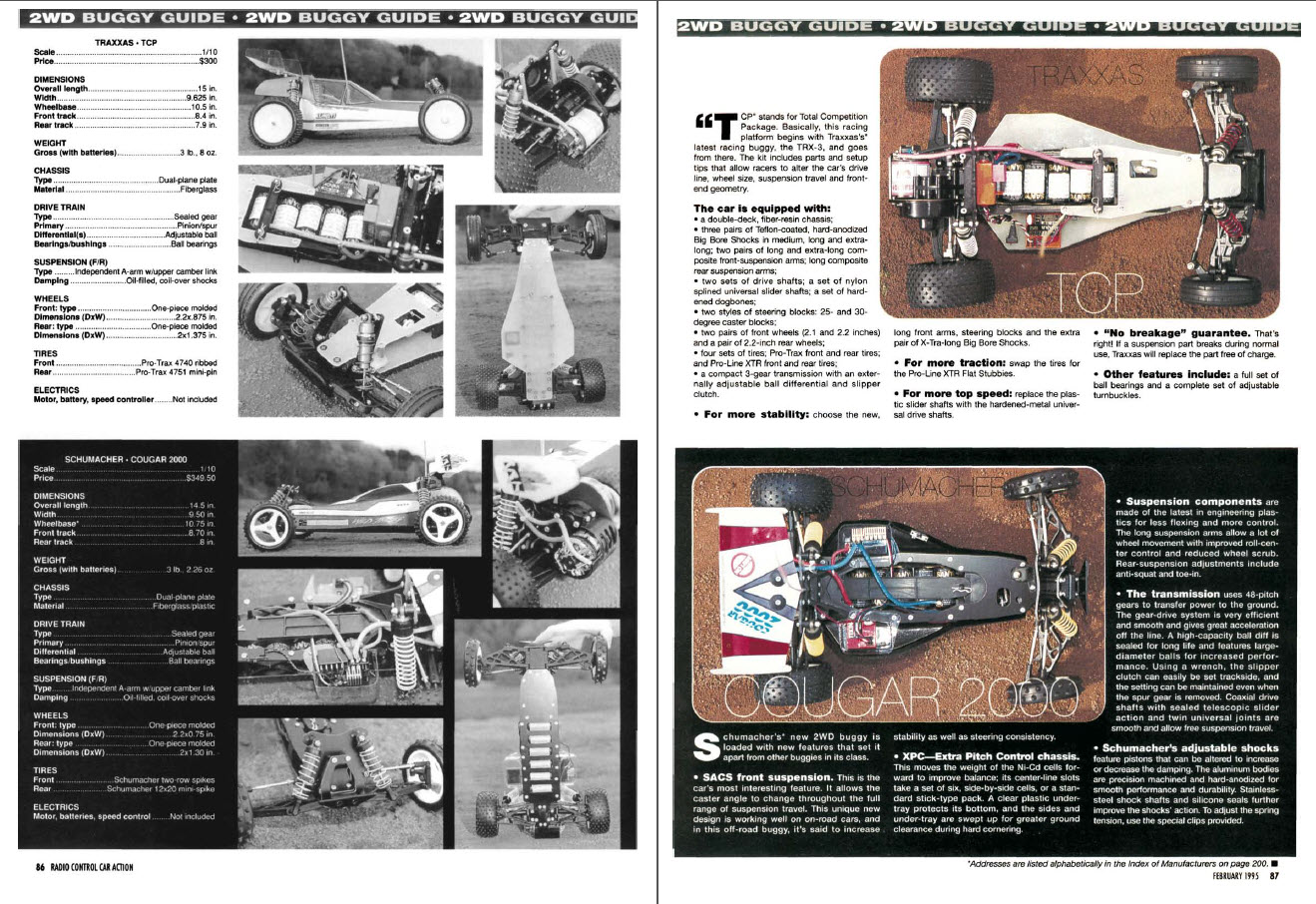 The Traxxas TCP was a “Total Competition Package,” with plenty of tuning options in the box including two complete sets of tires, dogbone shafts as well as universal-joint sliders, two sets of front arms in different lengths, and an additional pair of shocks to go with the longer front arms. Good luck finding a TCP today (well, here’s one). Schumacher’s Cougar 2000 was much more common in Europe than the states, and was definitely “something different” with its minimalist chassis, grass tires and 3-spoke wheels. 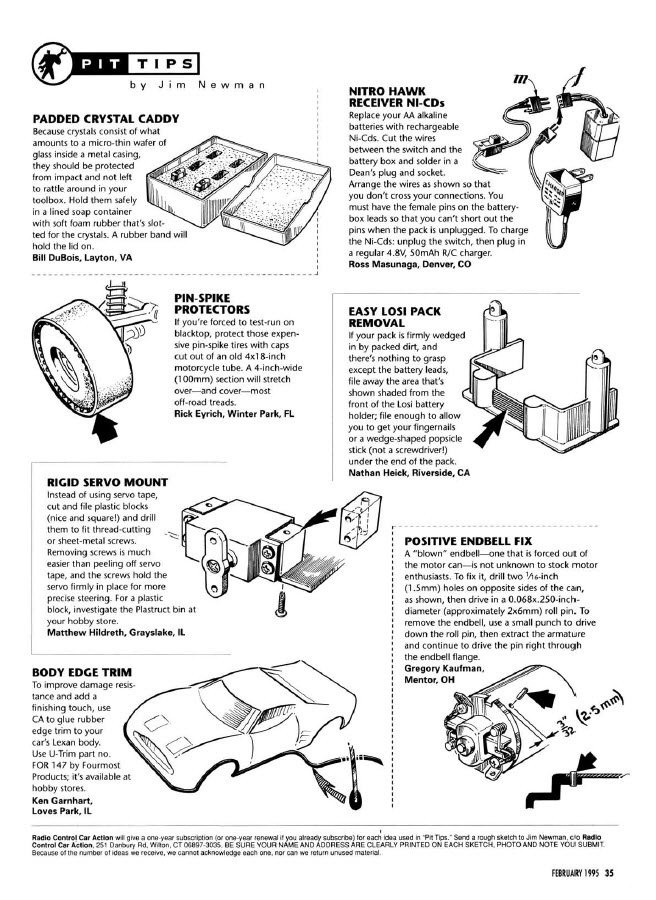 Gotta love Jim Newman’s hand-drawn Pit Tips. Even when the tips no longer apply to today’s tech, those ink-on-paper drawings are mesmerizing. The guy was an old-school draftsman, a skill you just don’t see anymore.