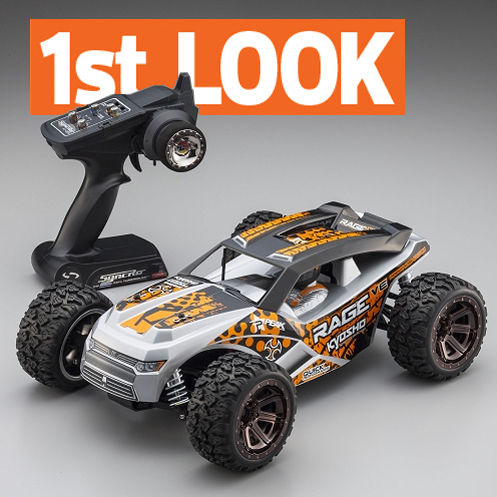 The Kyosho Rage VE is next in line for review in RC Car Action magazine. Before it goes under the lens and onto the track for testing, we thought we’d share a closer look at this new and unique machine from the big K. 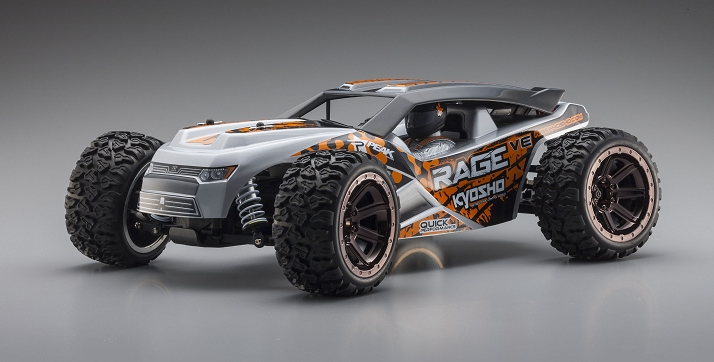 The Rage VE will never be mistaken for any other vehicle, that’s for sure! The concept-car styling and oversized (75mm diameter) wheels give the Rage VE a tough look. The beadlock rings are a molded-in styling touch, not functional. 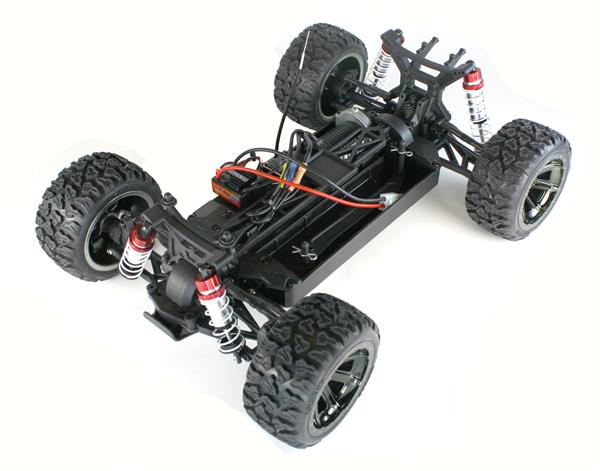 The Rage VE’s chassis layout follows the well-proven shaft-driven 4WD formula, and features a deep tub design. The waterproof speed control is the only fully-exposed electronic component; the servo (also waterproof) is beneath right-side upper deck, and the receiver is fully enclosed in a box behind the speed control. A battery is not included with the truck. 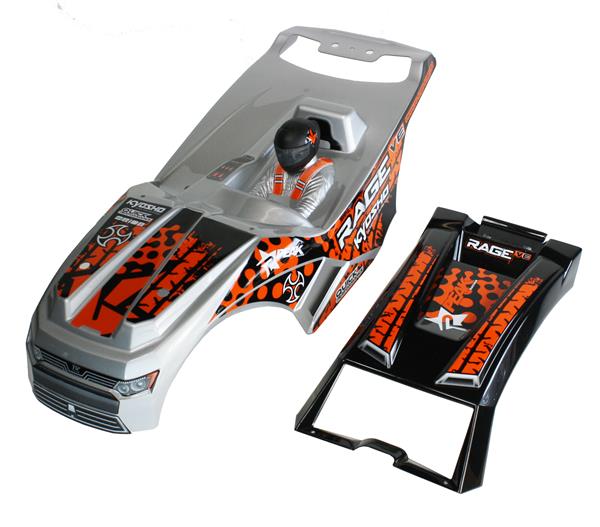 The Rage’s body is molded in two pieces and held together by three screws and nuts. It comes assembled, of course–we took it apart for photos. The driver’s head is a separate part. 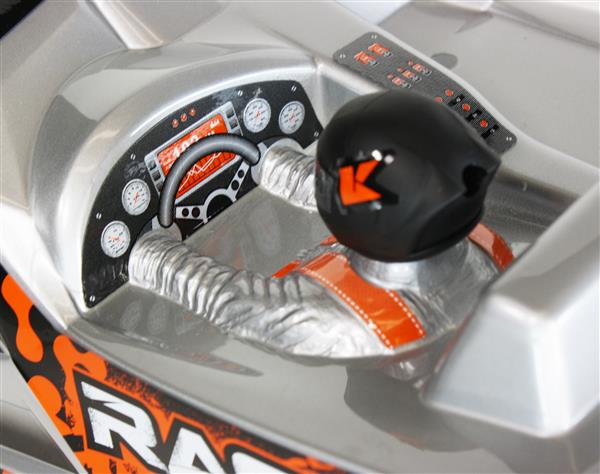 The dashboard details and seatbeld decals are nice touches, and the helmet shape is modern. If you’re a detail guy, you could easily paint the “suit” with  flat colors for even greater realism. 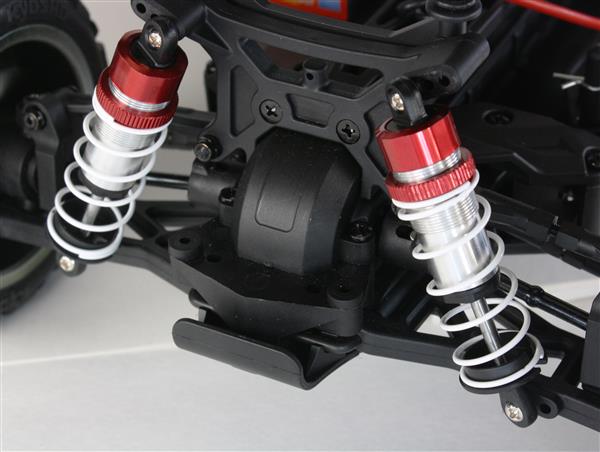 No plastic shocks here. The included aluminum-body dampers are beautifully finished and the knurled preload adjusters turn easily with just the right amount of resistance to hold adjustments. Shock action is super-smooth and build quality is excellent. all it takes is a few pumps of the suspension to emulsify what little air is in the shocks. Damping does feel a little light though–we’ll see how it does in the dirt before passing judgement. 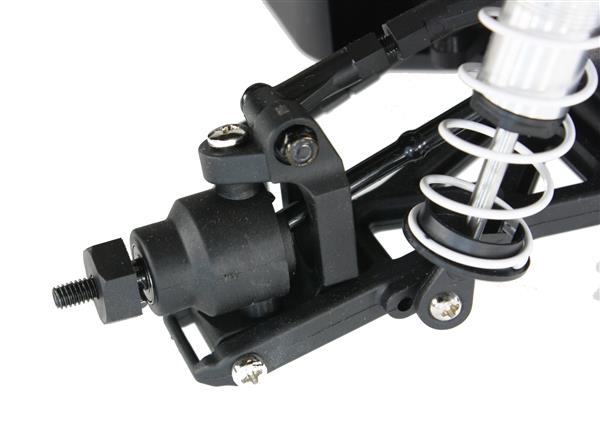 Good ol’ C-hubs and steering knuckles, nothing fancy here–or required. No need to reinvent the wheel! The camber links are threaded so you can make camber adjustments, albeit with some minor disassembly required. Note that the suspension arm is “capped” to help increase its torsional rigidity. 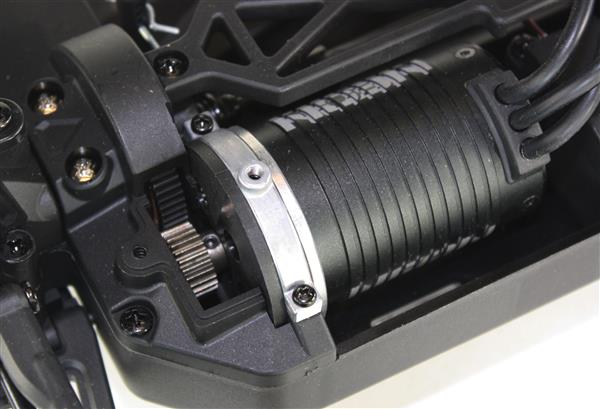 The included motor is an Orion Neon One sensorless unit, rated at 2400kV. In this shot, the gear inspection hatch has been removed. The motor mount is cast aluminum and mesh is adjusted by rotating the motor and its cam-shaped mounting plate. 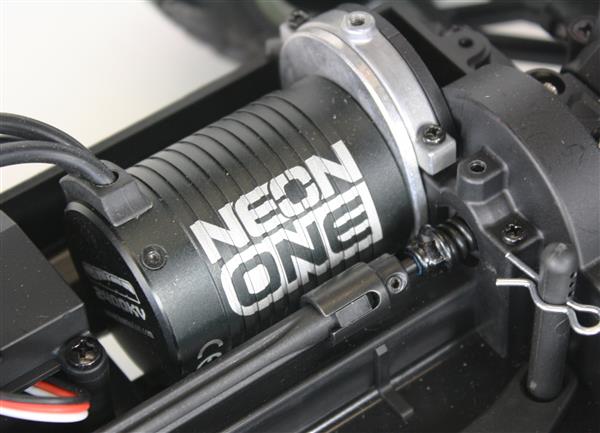 Another angle on the motor, this time with the top deck removed so you can see the slipper clutch adjustment nut and the plastic driveshaft. Rather than using a crosspin, the shaft has long flats that slide into the output cup. 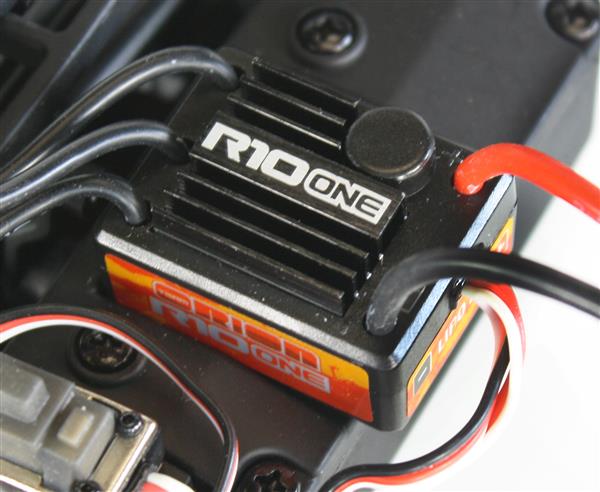 The Orion R10 One speed control is waterproof and rated for 2S LiPo packs. A molex (aka “Tamiya style”) plug is installed, which is usually a “miss” because of increased electrical resistance, but the Orion power system doesn’t have draw a lot of amps. With the included motor and gearing, and a 2S LiPo installed, the Rage tops out at 25mph. A better plug would be nice, but it’s not a must-have upgrade. 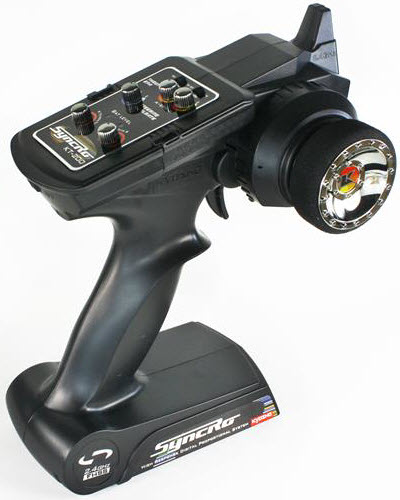 I limited my driving to a spin in the street, as I our test Rage needs to be kept pristine until we complete the high-res photography for the pages of RC Car Action magazine. However, even this limited driving did reveal the Rage offers brisk acceleration and a very smooth throttle feel. In fact, the car felt under-geared, and has me wondering how well the car will respond to a taller gear ratio–I’ll give it a try for the official review. As equipped by Kyosho, the Rage maxxes out at 21.5mph and is barely audible at speed. I don’t think I’ve ever heard a shaft-drive system this quiet outside of a well broken-in touring car. The plush suspension lets the Rage hit the three-whhel motion Ice Cube style in tight turns on pavement and will get up on two wheels if you keep pushing. I expect to have a lot of fun with the Rage VE in the dirt, but I gotta keep it clean for photos. Temptation…killing…me…