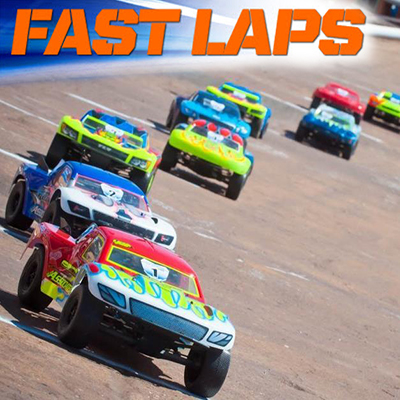 Baseball, Coca Cola, and apple pie – even these once-strictly American items have caught on internationally.  Since 1928, when Ford built the first Model A with a closed cab and a cargo box, Americans have loved their trucks…which is exactly the reason I don’t understand why RC racers keep trying to ruin them. 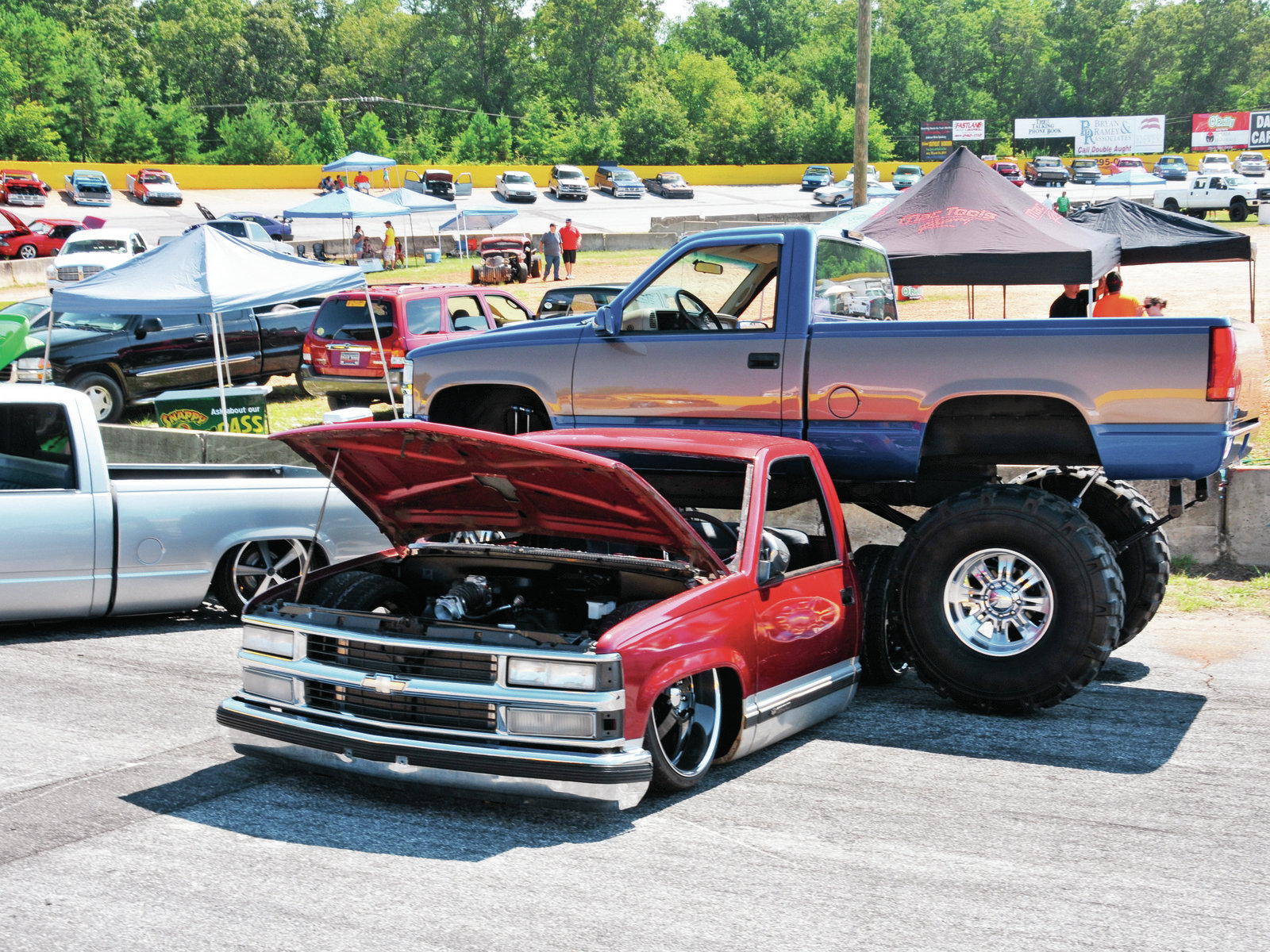 Even though vehicles like the Chevrolet El Camino and Subaru Baja have included a tailgate-enclosed cargo area, the modern American pickup truck has always been easily distinguishable from anything else on the road; after all, there are only so many ways that you can arrange a front-mounted engine, enclosed cab, and a “bed” mounted over the rear axle. Like any other motorized vehicle, it didn’t take long for casual, and then well-organized, racing events to start popping up across the continent. Trucks were raced in two different disciplines, ranging from the all-out desert time trails of the Baja 1000 and “Vegas to Barstow” that both began in the early 60s, to the indoor spectacle of the original Mickey Thompson Stadium Series and outdoor short course racing that began in Crandon, WI as early as 1970.

RC racing was born around the same era, and early asphalt-bound RC cars paralleled the designs of the day’s sports cars that competed in the 24 Hours of Le Mans and other international Grand Touring Prototype events. Like their on-road counterparts, the first “buggies” also were built to look like then-present day full-size vehicles, as the Tamiya Rough Rider, Kyosho/Cox Scorpion, and Team Associated RC10 were all fashioned with roll cages, headlights, and even driver figures! 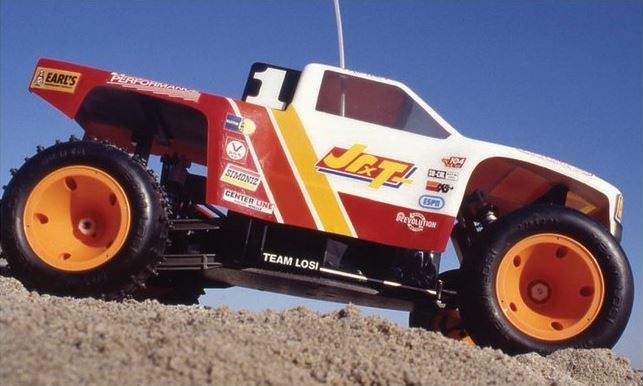 When Team Losi produced the first “truck” kit with the 1988 release of the JR-XT, the definition of “scale accuracy” was stretched a bit – the fenders of the awkwardly angular pickup truck body didn’t cover the tires – but the proportions were at least recognizable, with a flat hood and bed, and a well-defined cab area with real windows. It even had a five-link rear suspension! 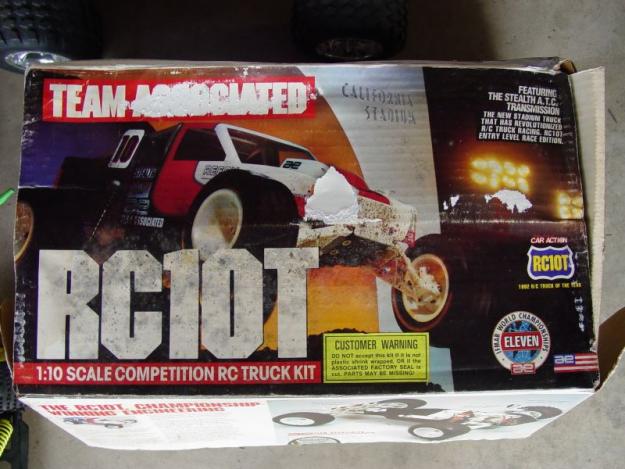 The LA Coliseum track was the biggest and baddest of them all – and watching the trucks jump the several-story drop down from its famed concrete arches was nothing short of amazing. Team Associated re-created that magical moment on the box of their first truck kit.

Team Associated followed suit with the RC10T two years later, molding a “roll bar” into the bed of the truck body, and depicting an RC10T jumping down the famed peristyle portion of the Mickey Thompson Stadium Series course LA Coliseum on its box art. Structurally, the trucks were longer and wider versions of buggies with bigger tires affixed to the axles, a trait that continues today – it was all about the body. Though they may not have been branded “Ford” or “Chevy” both trucks benefitted from easily identifiable headlight and grill decals as well as the number plates mounted behind the cab that looked just like the Mickey Thompson short course trucks seen by tens of thousands of people at stadiums across the country. 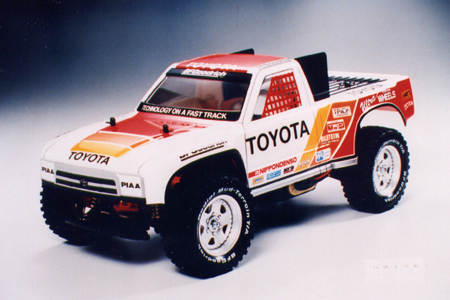 Ivan ‘Ironman’ Stewart was my favorite driver, and Tamiya’s tiny Toyota was a staple on my elementary school-age Christmas wish lists – sadly, I never got one.

So popular were the Mickey Thompson-style trucks that Tamiya morphed their TA02 platform into a 4WD off-road truck and topped it with a choice of Chevy, Ford, or Toyota lids, presented in advertisements with the official paint jobs of each manufacturer’s iconic factory racing entries. The Tamiya trucks’ off-road prowess suffered from the on-road platform’s small footprint and lack of suspension, but they sold like hot cakes.

Though the overall ‘look’ of the JRXT and RC10T certainly had its roots in full-size racing, each subsequent generation of RC “trucks” fell further away from the original intent. Suspension technology grew by leaps and bounds, materials improved, the vehicles got faster and easier to drive, but that twenty five years of development time also served to erase most of what identified the class in the first place. While buggies had also undergone their own mutation away from the original single-seat racers after which they were modeled, the line between which spacey-looking vehicle was a “buggy” and which was a “truck” grew evermore undiscernible, especially with the tires removed. 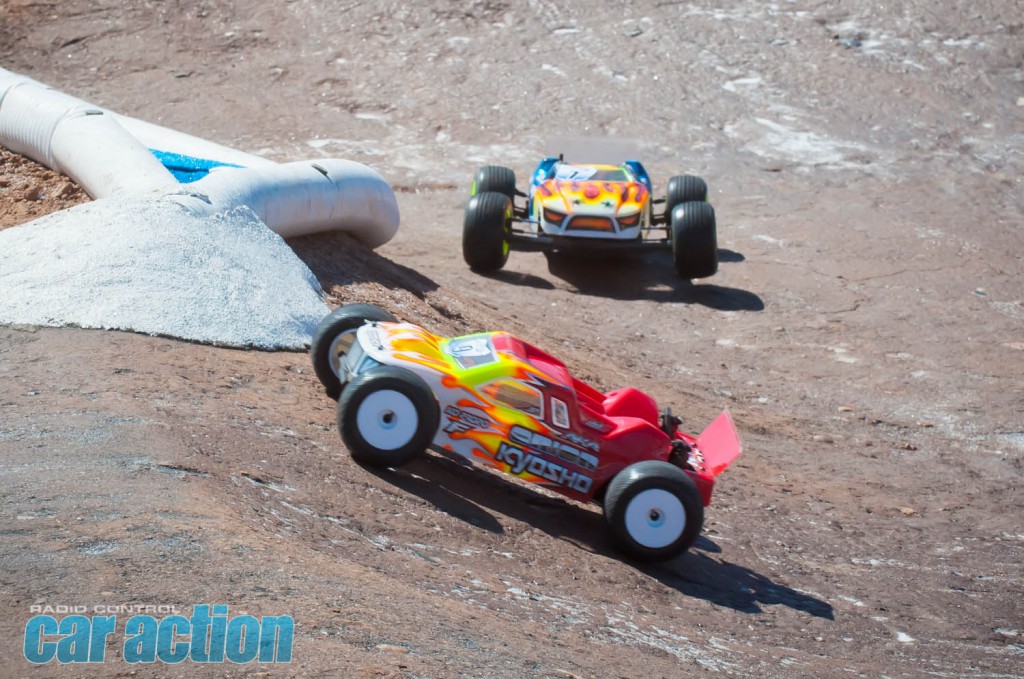 When did those trucks above turn into these? It’s been a gradual process over the last 20+ years.

Somewhere in the transformation of nitro off-road racing came the abominable term “truggy.” Not only do today’s trucks not look like a “truck,” but hardly anyone knows what a “truggy” is! 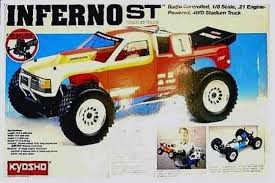 Ten years ago, many racers thought these trucks were “odd-looking.” If only we’d had a crystal ball to see what we’d be racing a few years later…

The 1/8-scale nitro truck class actually began in the late 90s when Kyosho followed a similar formula to Team Associated’s and Losi’s creation of electric off-road trucks, by putting a truck-shaped bodies, and slightly larger tires, onto its buggy platform. And it actually looked like a truck! 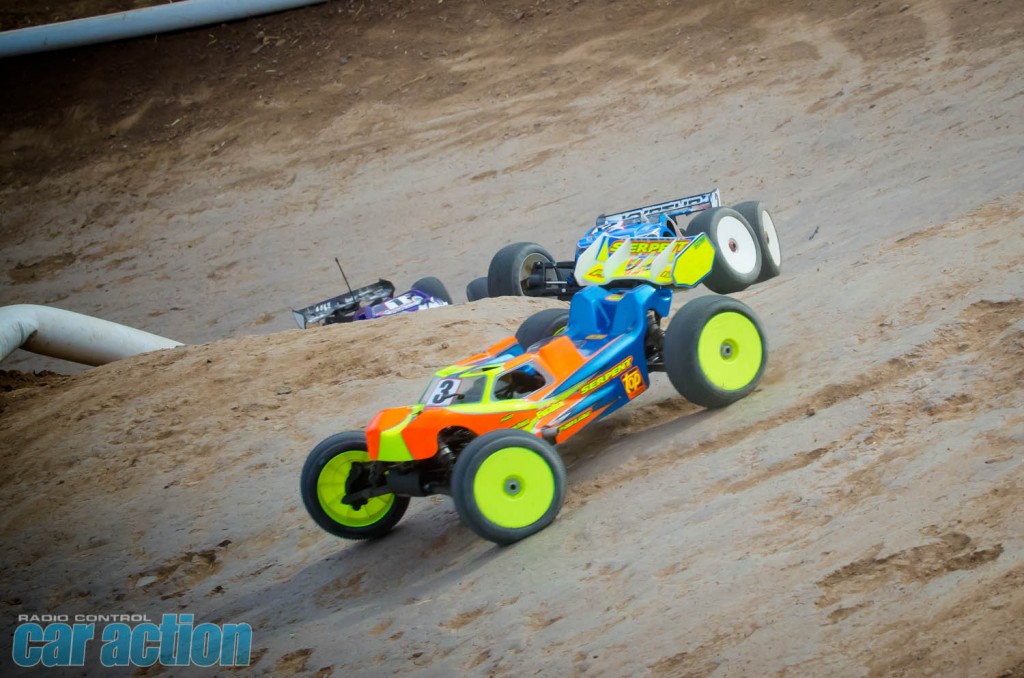 Today’s definition of the class started with aftermarket accessory manufacturers constructing various combinations of nitro monster truck and 1/8-scale buggy drivetrain and suspension assemblies. Because they combined parts of buggies and monster trucks, the original designs (that varied wildly from what we race today) were called “truggies.” In the real world, a “truggy” doesn’t really exist except for a one-off vehicle that Terrible Herbst Racing built for full-size desert racing in the southwest U.S., which uses a trophy truck frame that had been narrowed at the front and rear for more suspension clearance. Various names were thrown around for what to call the new class, including “Arena Truck” (a well-intentioned but confusing spinoff of “stadium truck”), but for some reason only “truggy” stuck. 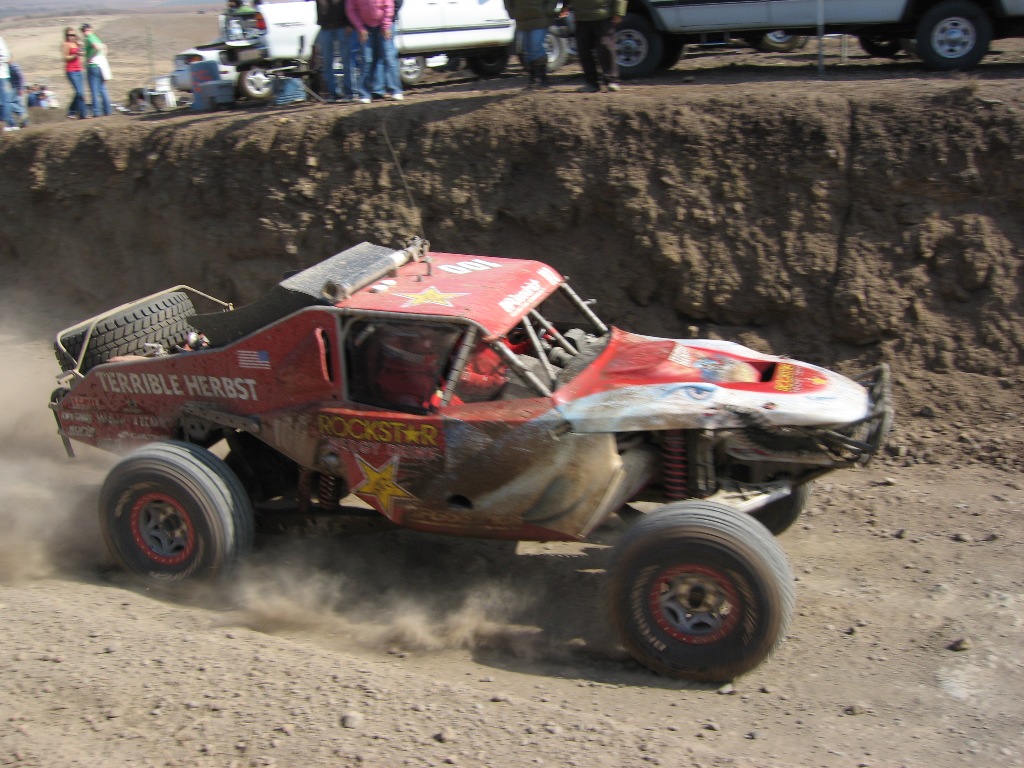 Ironically, if you do a Google Image search for “truggy” the vast majority of the results are RC-related – because the term is almost exclusively used in our industry and nowhere else. If you scan the results for full-size vehicles you’ll find more images of pickup truck-based rock crawlers with narrowed frames than you will the Herbst Racing Landshark (as its now called), or any other desert vehicle like it.

When today’s current 1/10-scale Short Course Truck hit the scene, and subsequently flooded race tracks across the country, the electric off-road scene rushed to differentiate between the two kinds of “truck” classes that were now competing on the same night. Traxxas marketed the original Slash as a “short course truck” because it was modeled after the vehicles competing in what was then the CORR series, but the existing truck class was called just that – “truck.” Because they were originally designed to emulate the Mickey Thompson Stadium Series vehicles, which in reality looked more like today’s short course truck, the class name transitioned to “stadium truck” – which is silly, since the track layouts built within the stadiums that hosted the series were short course tracks by definition. In fact, today’s “stadium truck” is more of a “truggy” than what the RC industry calls a truggy. Yikes!

Far outnumbering any other vehicle class among non-racers, short course trucks were an instant hit with many incoming competitors and helped bring new blood to many RC tracks – but racing traditionalists and much of the elite racing crowd never fully embraced the clumsy, full-fendered SC rigs for a number of different reasons: they’re too much slower than buggies, they drive too differently, they don’t jump as well (especially when it’s windy), and they’re too heavy to be driven as aggressively as a smaller and more nimble buggy or stadium truck, especially when fitted with crazy modified-class horsepower. Watching a short course truck race, even between the fastest RC racers on the planet, looks vastly dissimilar than watching the same drivers behind the wheel of smaller and more nimble buggies.

Isn’t that the whole point of having two different vehicle types, for them to be different? The “stadium truck” always has been, and continues to be, a slightly longer and wider buggy with bigger tires. They’re easier to drive than buggies, which have always been the premier class in RC (due to its international appeal) and often achieve lap times that are nearly as fast. What’s the fun in that? By comparison, V8-powered 4×4 trucks are the more prestigious class in full-size short course racing, and not only are 4WD buggies not even raced, but the 2WD models are restricted to 1600cc 4-cylinder engines! The lap times aren’t even remotely close.

Here are the TQ times for the recent Cactus Classic in each of the 2WD classes at the race, showing just how close the Stadium Truck times were to those of 2WD buggy (especially when compared to short course):

Differences in design and driving behavior aside, the problem with both classes trying to coexist at the local, regional, and national level, is that the number of competitors is severely fractured. While 2WD buggy will always be the largest class at any major electric off-road event because it’s the pinnacle of electric off-road racing, the second most popular vehicle type was always truck – though that has changed since 4WD buggies have gained popularity in the last ten years. Here’s how badly the entry counts were lopsided at the Cactus Classic:

The above problem exists at the local level, too; while 4WD buggy still is scarce at club racing in many areas (though it did outnumber both truck classes at Cactus), the splintering of drivers looking to compete in a second class along with 2WD buggy, as well as those who choose to drive a truck in either form as their main entry, means that many trucks must choose to run either a mixture of them both (which as shown by the qualifying times above is extremely unfair), or risk running two very small classes – likely a precursor to both failing completely.

In my mind, the fix to all of this is pretty obvious, at least on the local level – tracks and hobby shops need to protect the short course class for the simple reason that they’re much more marketable to incoming racers and not-yet-hobbyists. If this hobby ever does succeed in growing a following of spectators and potentially end up on TV or somewhere else that a large number of potential hobbyists will see it, the cars better not look like plastic spaceships – or we’ll end up right back at square one.

By “protect” the class, I mean to keep the trucks in mind when designing layouts and organizing races – by limiting the extreme obstacles (which is just a good idea anyway, minimizing broken parts and curbing racer frustration) and by potentially mixing the few stadium truck entries in with buggies of the same power source, rather than by having them beat up on the short course trucks. In order to encourage incoming racers to stay interested, and potentially move from the short course truck that introduced them into the hobby into a faster and more difficult buggy, they have to get hooked on the fun they can have at the track – and that means a good first impression! It’s understandable that the diehard racers want to go as fast as possible, but that shouldn’t mean that the appearance of these trucks has to go out the window – there are plenty of other components on the truck that can be modified, within both existing rules as well as the range of what’s considered “normal” for a truck, for racers and manufacturers alike to look for those elusive tenths of a second.

After all, isn’t this what we’re trying to emulate in the first place?

As for the “stadium truck” class, well…having them start to look like “trucks” again would be a good start.