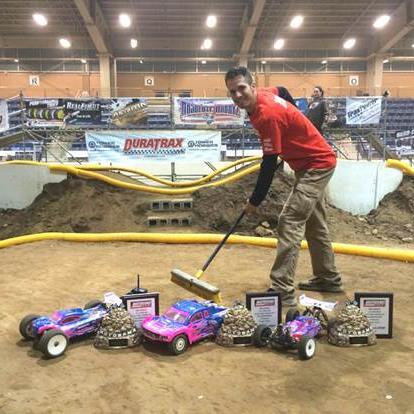 Can you imagine racing two big events on two consecutive weekends and on opposite ends of the country? That’s what drivers like Ryan Lutz, Carson Wernimont, and Steven Hartson will be doing when they hit the track this weekend. Aside from the Reedy Race of Champions, it’s really not until the middle of February that the RC racing schedule kicks into full swing – and with Motorama in Pennsylvania and The Dirt Nitro Challenge in Arizona scheduled back-to-back this year, it’s a busy time to be a pro…or in the case of today’s big news, an engineer as well! 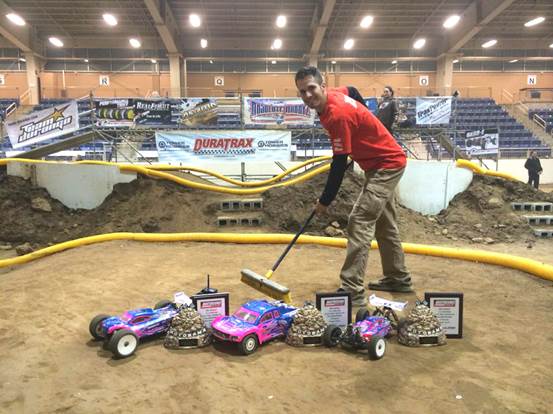 Team Durango’s Ryan Lutz needed a push-broom to clean up all of his hardware. Last year’s Pro Truck winner at Silver State will have to refresh his nitro chops for this weekend’s DNC.

Combined with full-size motorsports like sprint car races, motocross, ATV racing, go-karts, and more, Motorama might be the most exciting RC event anywhere. Held in the huge Pennsylvania Farm Show Complex in Harrisburg, PA, the 35+-year old event has included RC racing for the last several years, and the biggest winner of the all-electric affair in 2014 was Team Durango Ryan Lutz – who swept three divisions with a TQ and win! 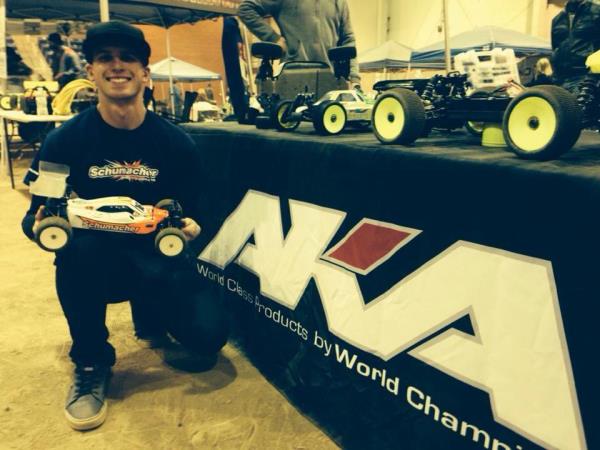 Carson’s victory with his new Schumacher vehicles was the British brand’s first on U.S. soil in years! Carson will switch to his Mugen Seiki t-shirts for The Dirt Nitro Challenge.

The traditional 1/10-scale classes were split between the 2012 and 2013 Reedy Race Open 2WD winners, as Wisconsinite Team Associated driver Chad Due traded wins with new Schumacher signing Carson Wernimont, who made the trek all the way from SoCal to the snow of Pennsylvania. 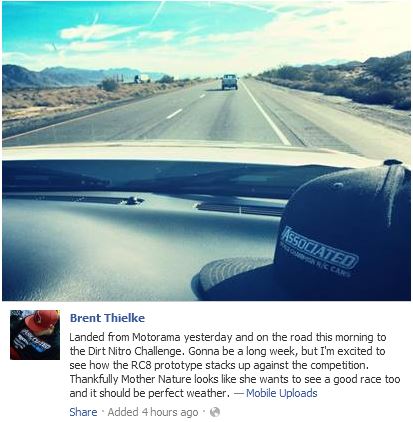 Brent’s Facebook post is all the information we have right now, but you’ll get the scoop as soon as we get more info!

Team Associated team manager Brent Thielke is among the lucky competitors who will be doing double duty this week, and perhaps it was the lack of sleep that caused him to let this slip on Facebook – Team Associated will have a prototype RC8 update in Arizona. It had been rumored that AE had been testing at various SoCal tracks ahead of this year’s nitro season (with the IFMAR Worlds coming up later this year in Messina, Italy) but that’s all we know – so far. Stay tuned to our Dirt Nitro Challenge coverage this week in case we find out any new secrets about the car, and keep your fingers crossed that Brent didn’t jinx the Nitro Challenge rainy weather curse!