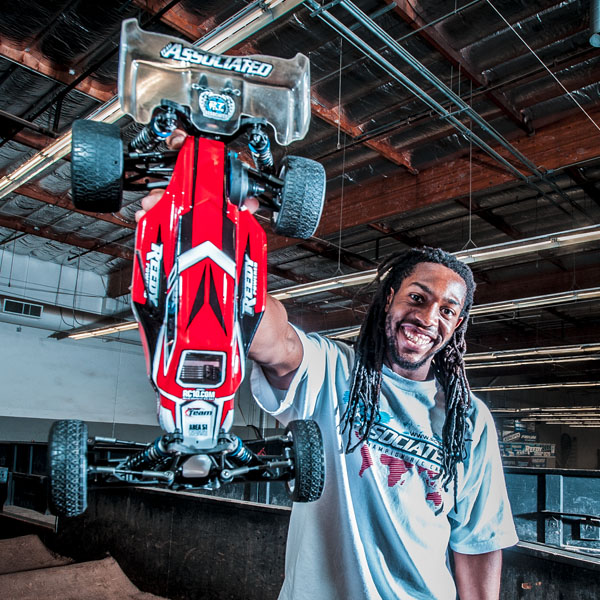 Any discussion of the modern Supercross era must include James “Bubba” Stewart, the second- winningest SX rider in AMA history (Jeremy McGrath is still number one). But he’s not the only Stewart in the spotlight; James’ younger brother Malcolm is a rising star in Supercross himself, and for radio control fans, he’s the Stewart to watch since he’s also a dedicated RC racer. The Geico Honda rider just can’t seem to get enough of the small-scale action, and like many of us, he spends a lot of his time pursuing RC racing with feverish passion. We got a chance to sit down with Malcolm last spring while he was relaxing at the RC track after one of his many intense training sessions. Check it out. 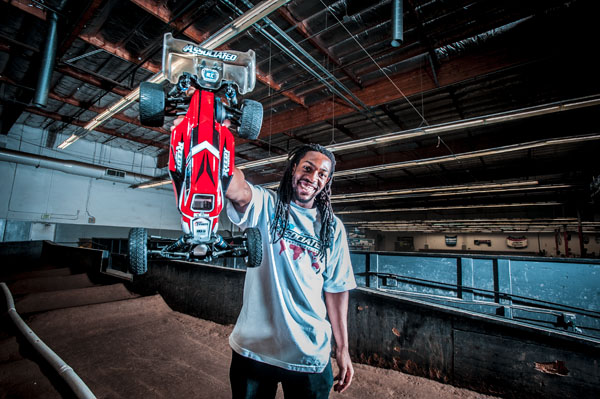 In the Supercross off season, it’s all about having fun with RC. (photo: Carl Hyndman) 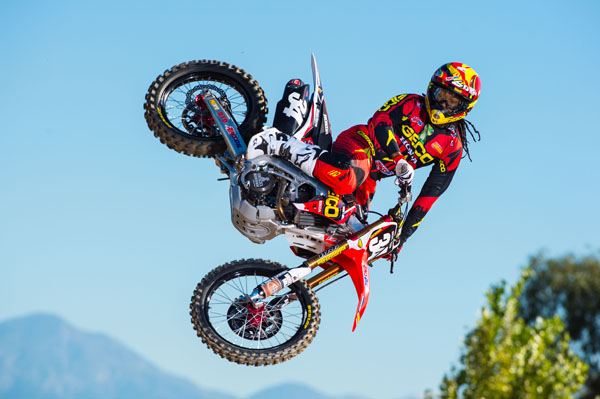 FAST FACTS
Age: 22
Hometown: Haines City, Florida
Sponsors: Geico Honda, AmsOil, Alias, 60, 100%, DVS, Muscle Milk
Malcolm made his Supercross rookie debut in 2011. In 2014 he finished sixth in the 250SX West Region, including three podiums. Geico Honda signed Malcolm to a full factory ride in the 250 class for the 2015 season, and he scored his first 250 Supercross win in the fourth round of the 2015 Monster Energy AMA Supercross Series in Oakland that year.

RCCA: When did you start riding dirt bikes?
Malcolm Stewart: I started riding when I was four. I wasn’t really into racing a lot and I was actually into fishing. But in 2010 I thought I could give it a try as a professional rider. “Let’s get serious.” So I turned pro and made my rookie debut in 2011 and I got a couple of fourth places and I thought, if I put my head down, I could do well at this sport and it’s been working ever since.

You’ve got a full factory ride with Geico Honda. What’s that like?
You know getting the factory bike is awesome. It‘s totally different than what a lot of B-teams and C-teams ride. One cool thing about riding for a factory team is that they never give up. There’s always something to try, something cool, something new and stuff that is in development as the season goes on and you can try everything. As soon as I got the offer to ride a 250cc, I took it. Since then I’ve been trying to make an impact and show these guys I deserve the ride. Getting that win at Oakland showed a lot of heart and that I never give up. Just because I’m on a factory bike doesn’t mean I can be okay. It means I’m always trying to go to the top.

What’s been the biggest change in your lifestyle? You’ve been doing a lot of training and testing.
It’s kind of the same honestly. On a factory team, there really isn’t too much of a difference. I’m still out in California around the same time, and I go back out to Florida for a little bit, then back out. I’m flexible enough to be able to have fun as well. That’s why I enjoy racing RC Cars. I also wakeboard—I still get to do a lot of the fun stuff.

What made you get in to RC?
Hmmm…if I remember right, in 2008 or 2009 I went to a hobby shop and I bought a 1/8-scale nitro buggy from them. Later I noticed they had a track in the back of the shop and I thought my 1/8-scale was too big for it. I was working with HB/HPI Racing at the time and they had gotten me a Blitz short-course truck and I ran that for a long time, but then I kind of got out of RC.  Then not too long ago I came back to OCRC Raceway and [fellow Geico Honda rider] Eli Tomac got me back in to it. I also noticed that everyone was now running buggies and short course trucks kind of fell out of favor. So I got a buggy and I’ve been hooked since.

Do you think you get drawn more toward the race stuff, or the basher stuff ?
I like them both. The bashing stuff is fun, but when it comes down to the racing stuff it’s fun ‘cause it makes you nervous and it reminds you of being on the gate in Supercross—like at Anaheim Supercross 1. I get more nervous racing an RC car than I am at the gate at Anaheim 1 or on the gate now. It’s a totally different feeling. I get that trigger finger, I stop breathing, as soon as I crash I can’t focus any more—especially if I’m out front, I just choke and end up at the back (laughs). It’s different and I think that’s why it’s cool and it doesn’t really require too much and I’m learning about that. I can say that anyone can do it.  That’s one thing I like about RC cars, anyone can do it and I know a lot of guys in our industry do it. You put a radio in anyone’s hands and nine times out of ten their face is going to smile. That’s one thing that’s cool about RC cars.

What draws you to RC most? Is it the competitive aspect, or do you like working on the cars and tuning?
It’s competitive. In a weird way you are always going to be competitive, especially in motocross. Eli Tomac and I are competitive with each other and I’m competitive with [American Honda rider] Cole Seely and a few other riders. It has nothing to do with motocross, but we are competitive and RC is competitive and I think that’s why we love it. It requires practice and it’s all about who is the smoothest and who can throw down the fastest lap. It’s just another form of racing. It’s hard to explain, but it feels just like racing motocross.

You get the same feelings, the same butterflies in your stomach?
Oh yeah, for sure. You get the same butterflies and maybe more with RC cars because you’re not used to it.  That’s what is great about it. You make mistakes and it’s the same. You stop breathing, little stuff like that. It’s mind games. The whole time I’m on the drivers’ stand I’m telling myself to stay calm and breath, relax. None of it is working ‘cause I get so nervous (laughs). It reminds me of racing motocross and like anything, the more you do RC the more comfortable you get.

Where do you think you’ll go with RC? You think you’re hooked?
I’m hooked.  The Team Associated guys stepped up and helped me get a buggy and helped me out and I’m definitely hooked. I’m not just going to do electric. I’m going to do some nitro stuff back at home in Florida. I’ll be around a lot. It’s great and feels like I’m starting racing all over again like when I got into motocross. Plus I can do it after riding and training and it’s something I can have fun with. It doesn’t tire you out and that’s what’s cool. A lot of other sports can tire you out and it can affect you, but RC cars don’t and it’s an activity you can do after motocross. It’s like playing a video game, but it’s way cooler. 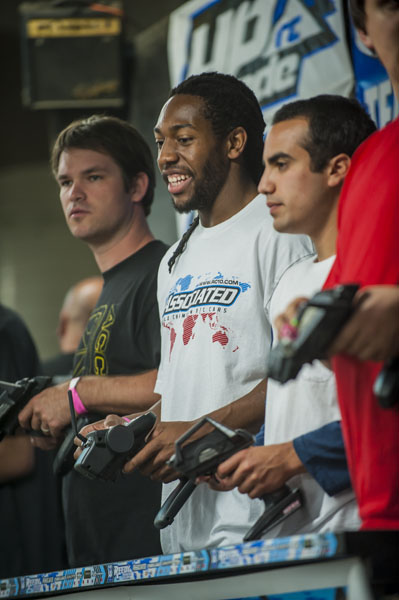 Malcolm is obviously competitive in nature and looks forward to racing with his friends in stock buggy. (Photo by Carl Hyndman) 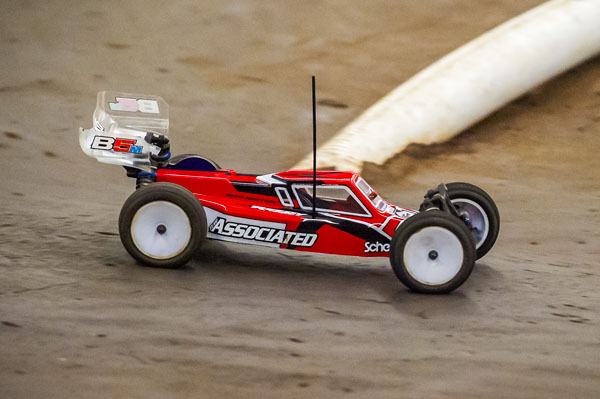 Malcolm has been racing a lot of stock buggy at OCRC Raceway in Huntington Beach, California.

FINAL WORD
It’s not surprising to see elite riders like Malcolm Stewart and his Supercross competition getting involved with RC cars. They love racing and it gives them a way to get the same rush when not training or practicing their sport. There are a lot of similarities they can draw between motocross and RC, but it’s some of the less obvious ones that may surprise you. These athletes often lead a life we can only dream about, and sometimes our appreciation for their craft makes us forget that they are just normal people like you and I who have a lot of fun with RC cars.