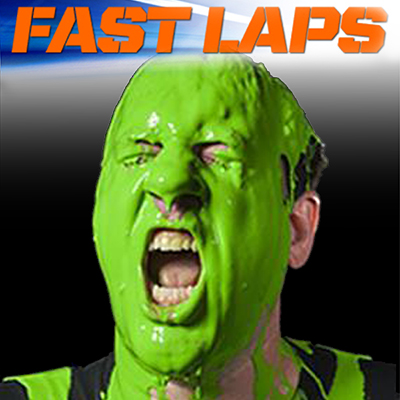 Several stories that could directly impact the racing side of our hobby have surfaced in the last couple of weeks, prompting me to share my thoughts on two of them specifically – a new brand called Schelle Racing Innovations, headed by famed car designer Kurt Wenger, and the introduction of Losi’s new gasoline-powered LST XXL-2 monster truck. Yes, it could affect racing! 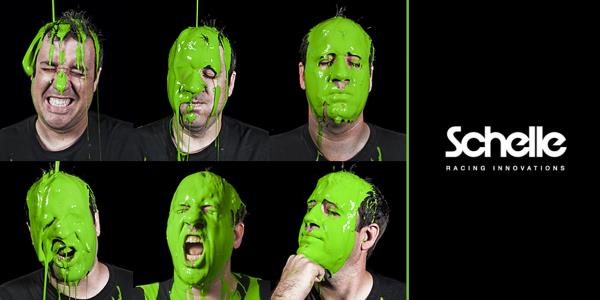 While at the IFMAR Electric Off-Road World Championships last fall I talked to former Team Associated engineer Kurt Wenger, who had just recently left his position at AVID and promised something new was in the works. His latest project, Schelle Racing Innovations, was announced a couple of weeks ago and he had new items to show at the recent Reedy International Race of Champions. 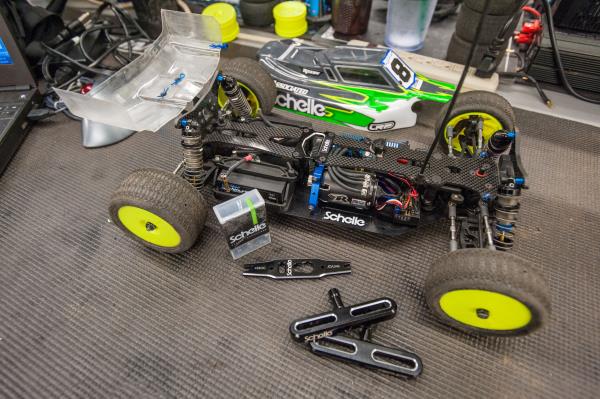 In addition to being an accomplished racer (he qualified in the C-Main in Open 4WD at the Reedy Race), and the designer of the original B4 buggy, Wenger also served as the role of “Coach” for Team Associated’s drivers throughout his tenure with AE – and held a drivers’ clinic at this year’s RROC assisting with driving techniques, answering car setup questions, and lending his experience (which has helped drivers like Ryan Maifield, Ryan Cavalieri, Jared Tebo, Steven Hartson, and more) to those who signed up. Schelle’s first batch of products look promising and it will be interesting to see what else he comes up with! Here’s the official press release:

It is with much excitement that we announce the launch of Schelle Racing Innovations. With months of successful planning and attention to detail, the company is now ready to make this formal announcement. Lead by Chief Engineer Kurt Wenger (formerly of Team Associated and Avid), a core group of talented individuals have come together to form Schelle with specific goals and visions for enhancing the R/C experience for enthusiasts.

“The entire Schelle team is excited about channeling our passion into the R/C market. The company exists as an avenue to introduce our brand of design-driven parts and accessories to enthusiasts. With a combined level of experience that spans decades in the industry, Schelle has a unique outlook on the future. We are always asking ourselves questions like “What’s next?” and “How can we make it better?”. From our products down to our packaging, we’re always thinking of ways to improve. We create and innovate in an effort to enhance our customer’s R/C experience. In short, we want our customers to go faster and have more fun driving their R/C cars and trucks!”

Look for our first product release in February 2014.  Please direct all inquiries to info@schelleracing.com 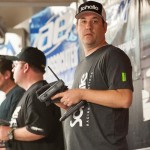 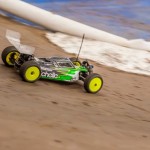 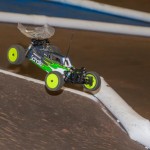 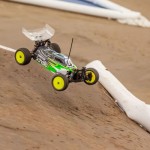 Is there room for more aftermarket companies in the racing world? Let us know in the comment section below!

The gasoline revolution is coming – and John D. Rockefeller would be very proud!

HPI Racing made a big stir at the 2012 Nuremburg Toy Fair when they announced that they were working on a “Savage Octane XL” that used a gasoline engine in place of the nitro-fueled glow powerplant that has propelled our hobby for decades. The buzz quieted down over the last couple of years as development continued, but fossil fuels were again thrust into the spotlight with more news on the Octane and two big releases from Losi! 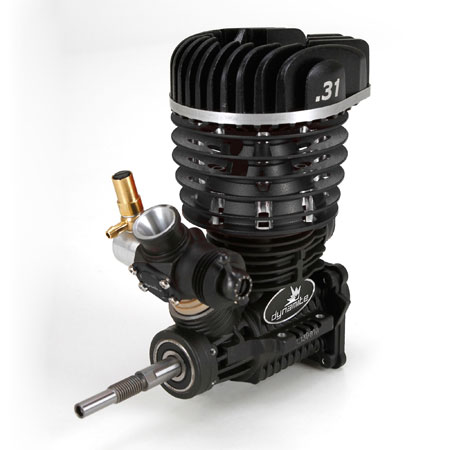 At this year’s Nuremburg Toy Fair, Losi unveiled their own gasoline-powered monster, the LST XXL-2 (see it here with video!) and completely stole the show. The gasoline engine, according to Losi, is more reliable and runs more efficiently than the nitro mill it replaces – and can run on pump gas from your local convenience store, which can be as much as 80% cheaper than nitro fuel at the local hobby shop. The fuel tank is also twice the size of the nitro-powered LST XXL, which could equate to a gigantic rise in run times – so much so that Losi fitted the fuel tank with a screw-on cap rather than a quick flip-up lid. The spark plug fires thanks to an on-board ignition system and battery, rather than relying on a stator.

Aside from the video of the truck running, we’ve yet to see how the gasoline engine’s power will compare to the nitro engine, but the tuning consistency and additional run time alone could mean HUGE things for the racing world – can you imagine a 45- or 60-minute main event on one fuel stop? Of course, these gasoline engines are decades behind their nitro counterparts in terms of racing-specific development, and at the top level racers are still asking the most of their engines in terms of power and torque delivery. Even if the industry suddenly jumped head-first into the new technology (disregarding engine mounting and other logistical problems) engine manufacturers and builders will have to start from scratch just to get up to speed on how to make the engines produce the powerband that suits today’s vehicles – or expect the car designs to reflect the new engines. 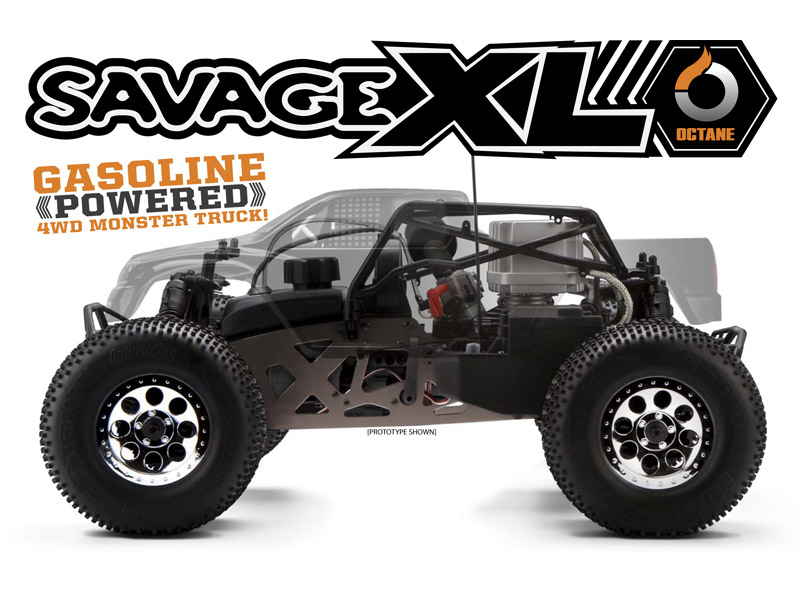 HPI teased Savage fanatics with a few new details on the Octane, but loyalists are still tapping their toes while waiting for a release date.

HPI was more tight-lipped about their upcoming Octane XL, but released this video indicating progress in the truck’s ongoing development. However, the status previously released about the truck, and its 15cc engine, indicate that gasoline engines are further away from changing the racing world as we know it.

When the sport of motocross transitioned from two-stroke to four-stroke engines (amid arguments that could fill this entire page), class designations for the 125cc and 25cc oil-burners had to be realigned to match their four-stroke replacements – renamed the 250cc and 450cc classes. The same problem will exist in RC, as the maximum size for an engine used in the industry standard 1/8-scale buggy class is currently limited to .21 cubic inches (or 3.5cc) and 1/8-scale trucks limited to .28 ci (4.6cc), both significantly smaller than the .31 engine used in the LST XXL-2. Then there’s HPI’s Savage Octane engine, which is advertised as a 15cc engine or roughly .91 cubic inches – nearly three times the displacement! If the manufacturers intend for the technology to be used in racing, they’d all be better off coming to an agreement on engine sizes before moving too far into R&D. 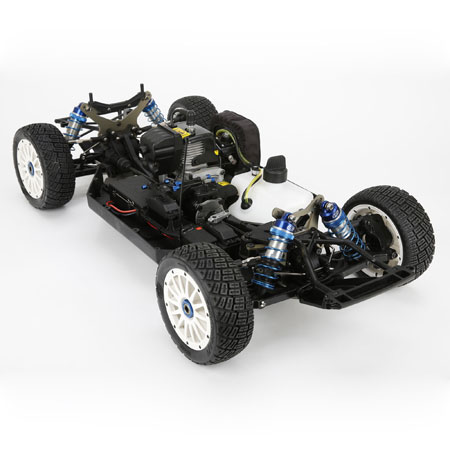 Lost in the big news of Losi’s 1/5-scale mighty 5IVE Mini WRC Rally Car is the 2-stroke “weed wacker” engine in this thing is outfitted with electronic fuel injection!

While all the new product and technology buzz these last few weeks surrounded the gas-fueled 1/8-scale monster trucks, a particular piece of interesting technology on Losi’s new officially-licensed 1/5-scale nod to Mini’s John Cooper Works Countryman for the World Rally Championship, the 5IVE Mini WRC, totally slipped under the radar. Though 1/5-scale vehicles rarely need significant tuning in order to run reliably and produce more power than what’s usable to most drivers, the huge 29cc engine that is the biggest in Losi’s large-scale lineup (over the 26cc used in the 5IVE-T and 23cc in the Desert Buggy XL) is fitted with a new SureFire electronic fuel injection (EFI) system like what’s used in full-size cars. The EFI system will make starting even easier, as the engine won’t need to be optimally primed for cold starts, and completely erases the need for carburetor needles. Modern EFI systems for cars and motorcycles can be tuned to alter the engine’s performance easily and more consistently than a carburetor, so it’s only a matter of time before this too trickles down to RC – and nitro racers will join their electric comrades in bringing their laptops to the racetrack.

How do you think the news above will affect RC racing? Let us know below, join the conversation on Facebook, or tell me on Twitter @AaronRCCA!