Jada is a giant in the diecast world, and in recent years it has branched out into Radio Control models in order to bring a higher level of excitement to the next generation of budding enthusiasts. They’ve also made a full-throttle investment in the Fast & Furious franchise across all their product lines. Jada’s RC efforts land squarely in the toy category, but for the Fate of the Furious (F8)’s “Elite Off-Road” series models, the company upped the performance ante a bit to keep the speed-freak F&F fans happy. Jada has noticeably beefed up durability and added proportional throttle control, making these by far the company’s most capable RC offerings. They come dressed as 1:12 monster truck versions of F8’s two most memorable off-road machines: the Dominic Toretto’s Ice Charger and Hobbs’ Navistar MXT. We’ve got ‘em, so let’s see how they look and how they drive. 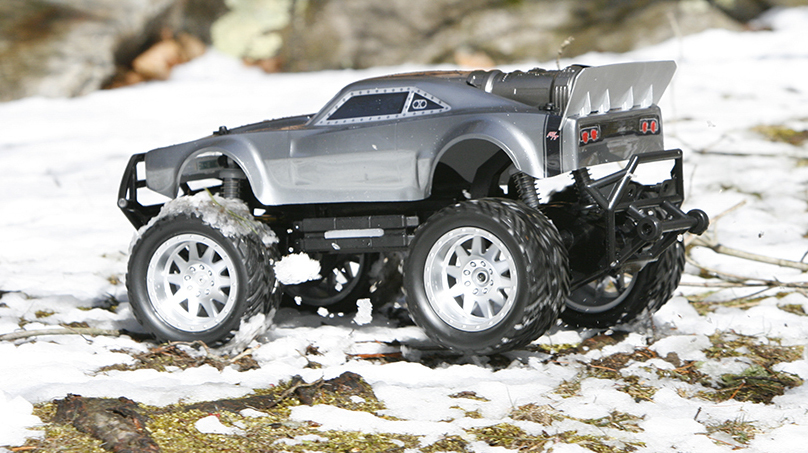 Jada’s Elite Off Road Ice Charger looks right at home in the late-March snow and it handles it no problem. Photo by Julie McNeil. 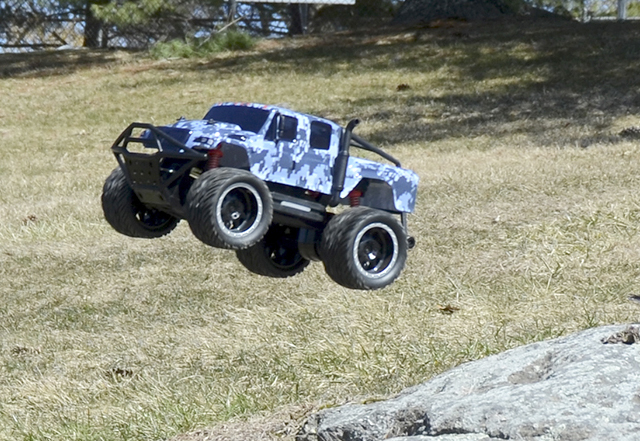 Jada claims 12.5mph, but the trucks feel faster. With a good run up these guys jumped 10 feet easily. Photo by Julie McNeil. 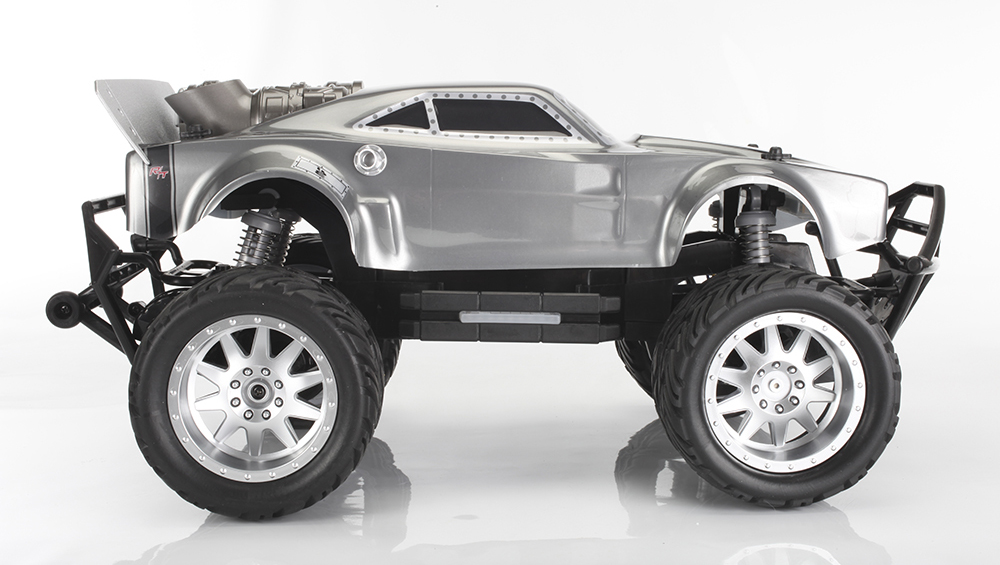 The Ice Charger and the MXT are both nominally 1:12 scale, but in order to make the 151-inch wheelbase truck and the 117-inch muscle car fit the same chassis some liberties had to be taken. The 9.75-inch wheelbase of the chassis puts the Charger spot-on 1:12, but the MXT is more like 1:15 scale. 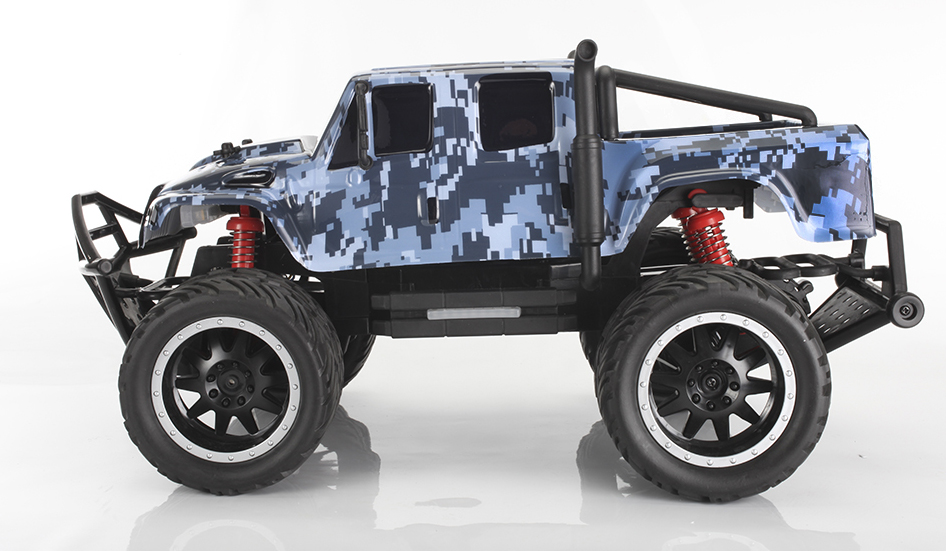 Neither is 100-percent scale-accurate of course, but then the Ice Charger in the movie had no actual Dodge pieces left except the windshield frame and roof anyway. A bit of creative license—needed to adapt them to the 2WD monster truck chassis—poses no problem in terms of appeal for the intended audience.  Authenticity is taken up a notch with strategic use of molded plastic parts to dress up the Lexan bodies. 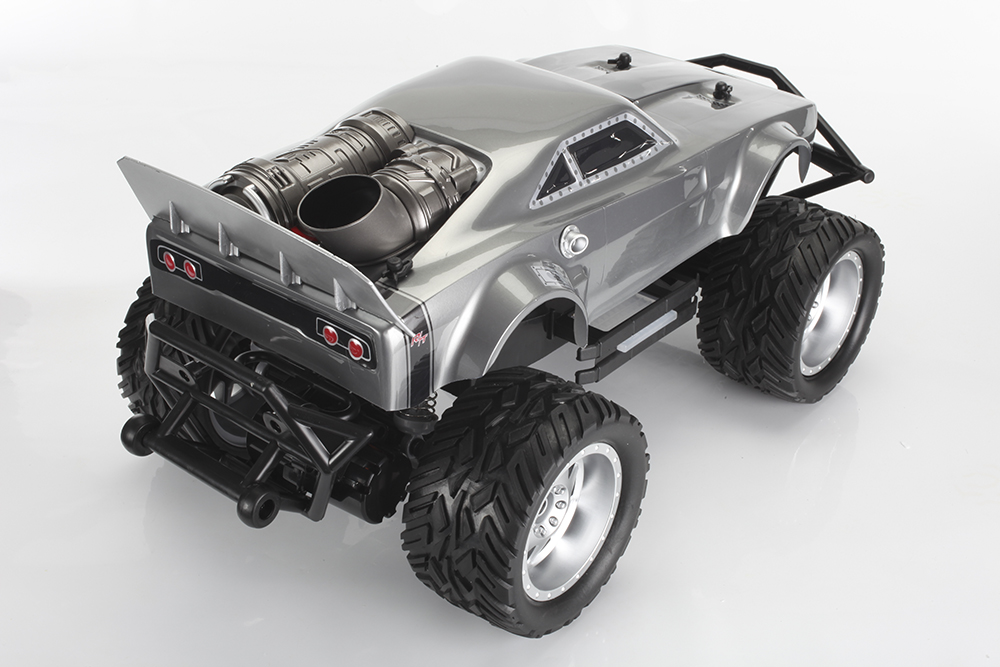 The Charger gets the stylized EMP weapon in the trunk along with the helicopter turbine that powers it. 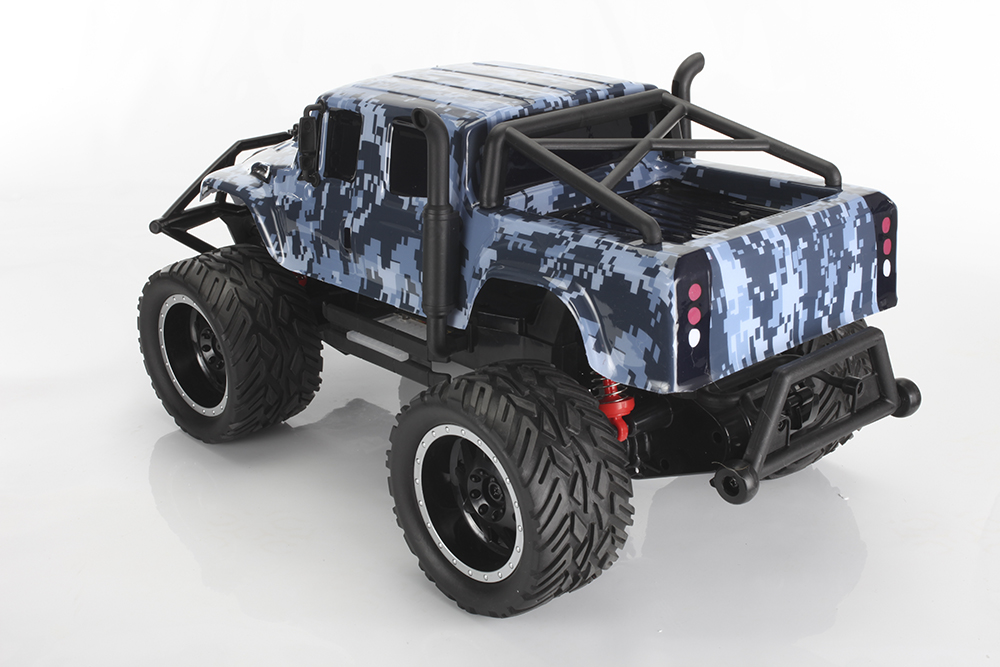 The MXT gets side mirrors, a trophy truck style roll bar in the bed and vertical exhaust stacks—the latter two items it did not have in the movie but they add to the looks here. 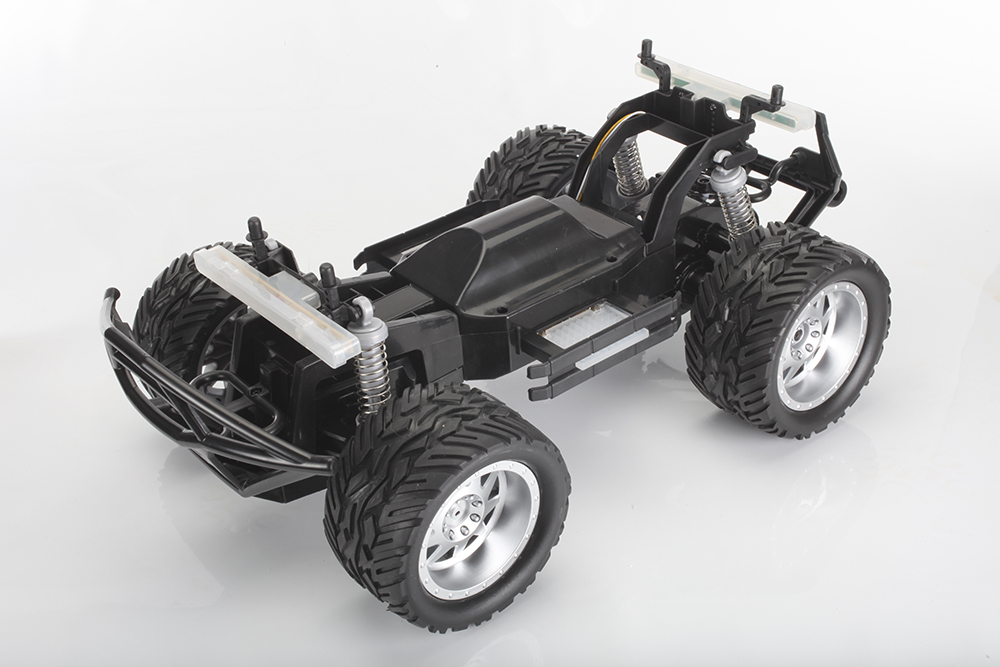 The electronics are sealed in the center compartment and the solid axle suspension features durable steel coil springs at each corner.

The Elite-series chassis employs solid axles front and rear and metal coil springs at all four corners. The motor and gearbox (which uses metal gears for durability) are integrated into the rear axle housing, and the front of the housing forms a single giant trailing arm hinged into the center of the chassis. This setup is pretty tough — we jumped and tumbled these trucks a bunch and they took every hit in stride. The design allows a decent amount of suspension travel too; eventually the top brace for the rear bumper (with built-in wheelie bar) comes into contact with the body on the MXT, but it doesn’t affect driveability, and you could always notch the bottom of the tailgate to get that last half an inch of travel. The front suspension has no body interference from compression unless you’re at full steering lock, and even then its minor and doesn’t present driveability issues. 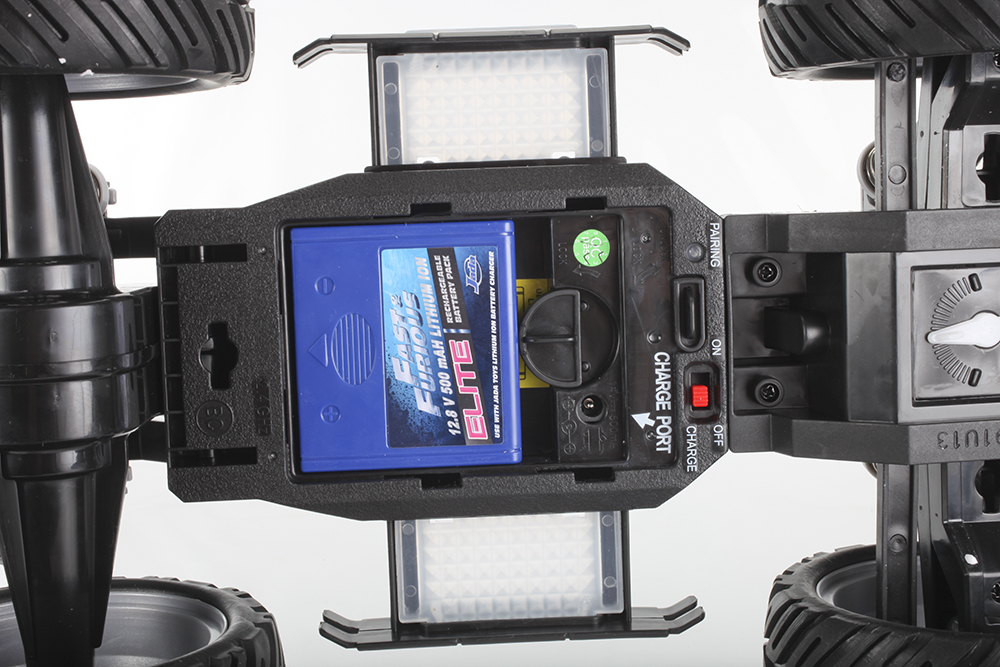 Jada’s Elite Off Road trucks come with a 12.8V Lithium-Ion battery that mounts into the bottom of the chassis under a protective cover (removed in photo.) The charging jack is also located under the cover.

Power comes from an included 500mAh 12.8V Lithium Ion battery encased in a hard plastic case and slots into the bottom of the chassis. Jada supplies a basic wall charger too, and the pack gets charged in the chassis via a charge port. The rest of the electronics are housed in a sealed compartment on top. The setup offers good debris and water resistance. We bombed through snow and mud with both trucks and encountered no issues with electronics. An LED light system comes standard on both trucks; there are light bars front and rear for head- and taillights, the running boards are lit as well.The molded 10-spoke wheels and treaded rubber tires are the same on both vehicles, but the centers of the MXT’s wheels have been painted black. 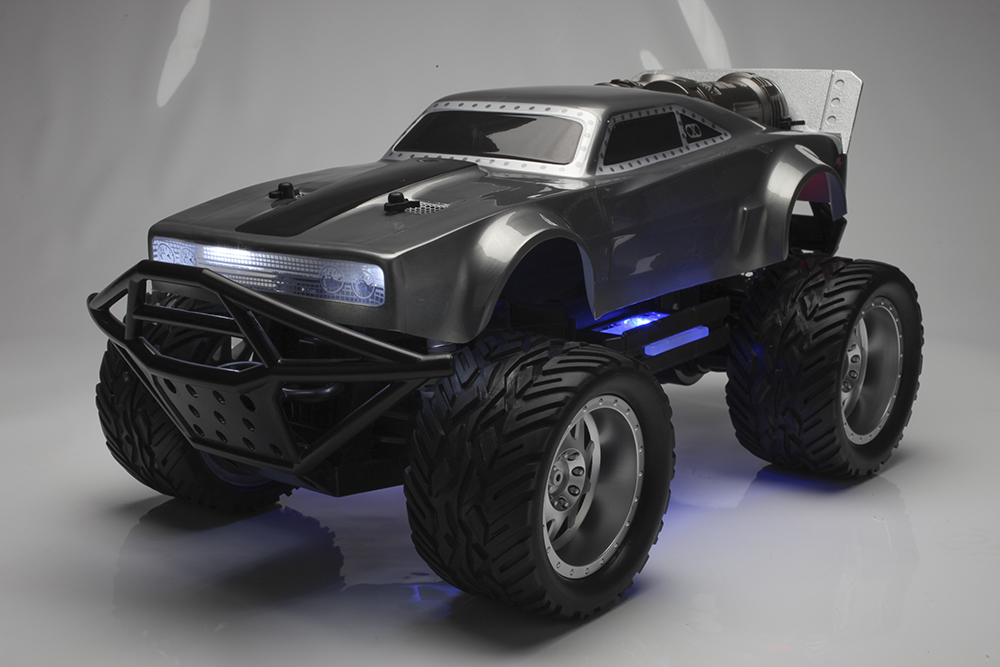 Each vehicle comes with a full lighting system: head- and taillights and running boards all have LEDs installed.

Jada quotes the scale speed at 150+mph. That translates to 12.5 real-world mph, which is about what we observed. If anything, they feel a little faster. Given their size, the speed should be quick enough for most kids, the intended users of these models. The need for an integrated wheelie bar is a bit optimistic under normal driving, though both trucks will wheelie on grippy surfaces. The tires are designed for all-purpose use, balancing long wear with adequate grip on- and off-road. They grip OK on clean asphalt, but on dirty or wet tarmac and off-road wheelspin can be an issue. That’s compounded by the open diff which allows an unloaded wheel to spin freely, so you can get high-sided or stuck in loose dirt and snow if you’re not careful. The throttle is fully proportional, but steering is not. The trucks turn well enough, but fine adjustment of the driving line isn’t in the cards with a system like this. Youngsters just banging the wheel left and right won’t notice or care. 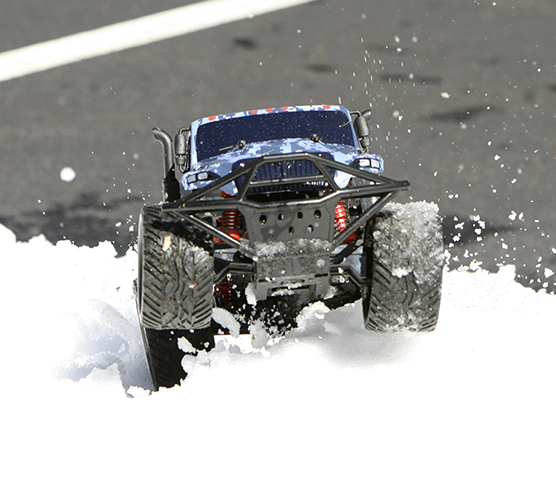 Deeper snow was doable too as long as we kept on the throttle to maintain momentum, otherwise the tires can lose grip and get the truck stuck. 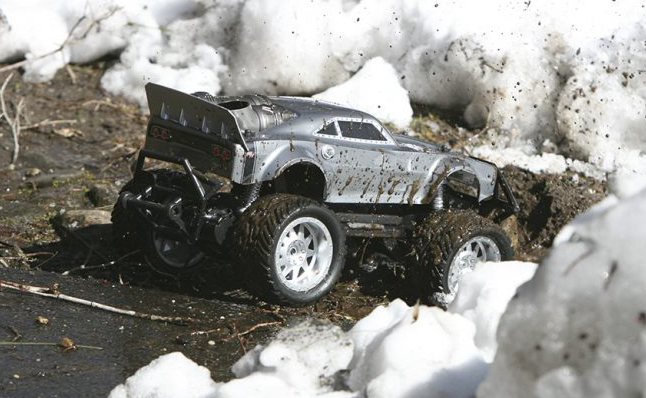 A big part of the monster truck experience is jumps; the trucks jump surprisingly well and the suspension is tough enough to take the landings. We were repeatedly jumping them 8-10ft off an improvised ramp with no difficulty. But while the steel springs are functional, the shocks are only for show—they don’t actually provide damping of spring motion. As a result the trucks are very bouncy on landings; be ready for a big secondary nose-high hop. That can be fun, but it did lead to a few roll-overs and even a couple end-over-end cartwheels. The trucks drove away every time with zero breakage — not something we’d necessarily have expected with a $60 truck. That’s good, because replacement parts are probably not going to be easily available. 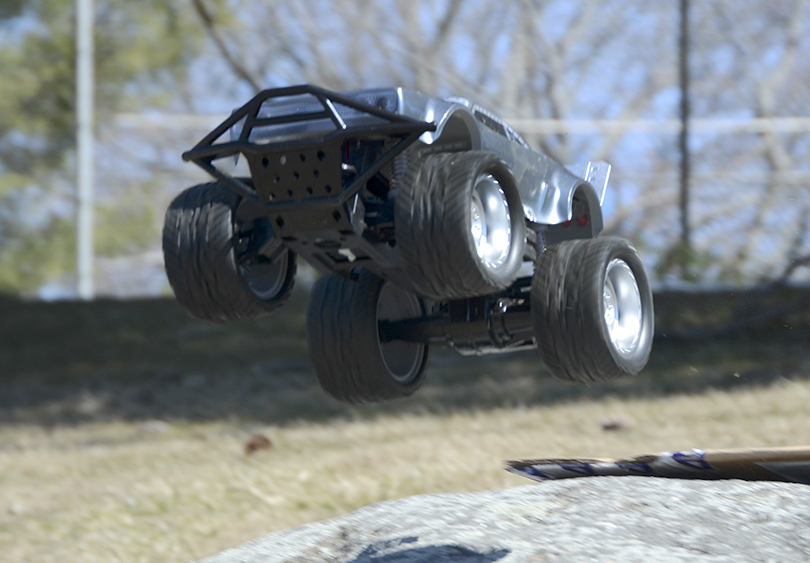 The solid axle chassis is surprisingly tough. We jumped each truck dozens of times without breakage. 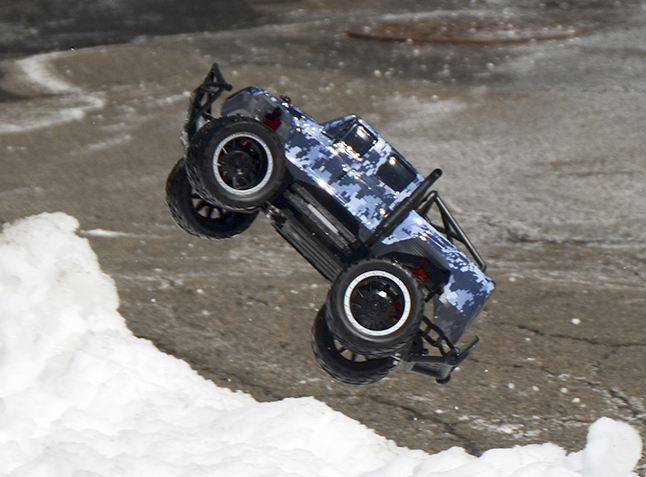 Stiff springs and no damping tend to make the trucks bounce the nose both on launch and on landing. Its kind of fun, but it can also lead to rollovers.

The Elite Off Road series vehicles are fun for kids to drive, and offer plenty of speed for RC newcomers to hone their on- and off-road driving skills. We’d definitely like to see Jada take the next step and add proportional steering and some shock damping to allow more precise driving and help differentiate them from other toy-isle offerings, but as-is these vehicles deliver a lot of RC enjoyment for $60. 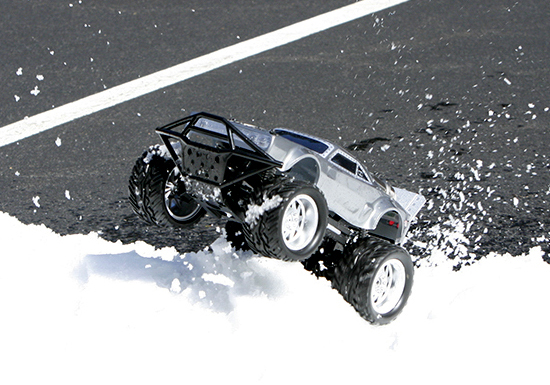