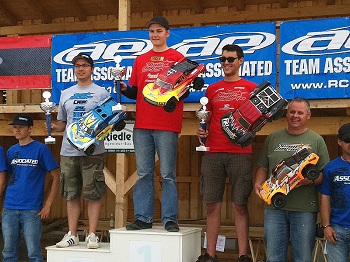 The innaugral ‘European Short Course Masters’ took place last weekend at the Mc Welden track near Munich, Germany. A total of 4 classes were on the cards with 2WD SC & 4WD SC being the main classes along with 2WD ‘RTR’ SC and 1/8th 4WD SC also featuring.

The track is a mix of surfaces with the majority of the track being split between dirt or astroturf. The track is usually a 1/8th off road track and is large for the 10th scale trucks.

Friday saw open practice and right from the off the Team Durango DESC410R was totally dialled in and the team drivers were very confident. The track had started moist and slowly dried – in turn the grip levels came up a lot. The team used the 1.5mm front anti-roll bar which worked well to calm the steering.

Saturday saw the start of qualifying after one last practice run. There were to be 6 rounds of qualifying in all with 4 Saturday and 2 Sunday. Team Durango’s Hupo Honigl TQ’d the first two rounds with his DESC410R. The rain started after round two and some drivers decided not to run in the worsening conditions but double IFMAR world champion Martin Achter braved the weather to take the next two rounds of qualifying. After qualifying Team Durango held the top three spots with the DESC410R ahead of Robert Hart and Ryan Maifield – who’d been flown over especially as the ’secret weapon’ of the AE team to win their own event.

Top 5 after 6 rounds of qualifying:

In the first 4WD SC A-Main Hupo had the lead after the start. But he had a problem and retired after 2 Laps. Jörn took up the lead followed by Ryan Maifield and Martin Achter. Jörn put some quick laps and had built up a confortable lead. In the last lap Martin Achter overtook Ryan to finish 2nd – the best result the competition would have in the finals as it would turn out as the Team Durango cars stamped their superiority on the meeting.

In the second leg of the A-Main Hupo again had a good start. Jörn overtook Martin Achter and was now in 2nd behind Hupo. Hupo had a small mistake and Jörn closed in behind him. Both drivers had a nice battle for the lead. In the end it was Jörn who took the win, Hupo 2nd and Martin Achter 3rd.

The last leg of the A-Main saw Hupo lead from the start. Jörn tried to overtake Martin. After one lap Jörn went for the inside line on Martin for 2nd. Hupo again had a small mistake and now Jörn was in the lead. 2 laps before the end, Hupo overtook Jörn to take the win, 2nd Jörn and 3rd Martin.

In the end it was a stunning 1-2-3-4 for Team Durango as Gerd Pfifer took the first non-podium position in 4th with Marcel Louis Khorosh in 9th. It really couldn’t have gone much better for the team as they blitzed the opposition.