Every so often a manufacturer will release a kit that comes straight out of left field. You know what we’re talking about; we’re sure you’ve seen them before. Whether its an RC blimp, a remote controlled forklift… or even a trash dumpster, these aren’t your regular RC racers and bashers. Tamiya is no exception to these types of unique creations. Who remembers their fun three-wheeled bikes, Dancing Rider and Dual Rider? Well, they’re back at it again, only they went big this time, 6-wheel-drive big.

The Tamiya Volvo A60H Hauler 6×6 is head turner for sure and it’s got plenty of accurate scale details to immediately pique our interest. If you asked us what kind of RC vehicle we’d create, a giant earthmover probably wouldn’t be at the top of our list, but that’s not because it isn’t cool, because it certainly is. It’s because our imagination tends not to move in the direction of heavy machinery, which frankly it should. The last Tamiya kit to broach this genre is the 1/24-scale Heavy Dump Truck, which is also a fantastic construction site basher. 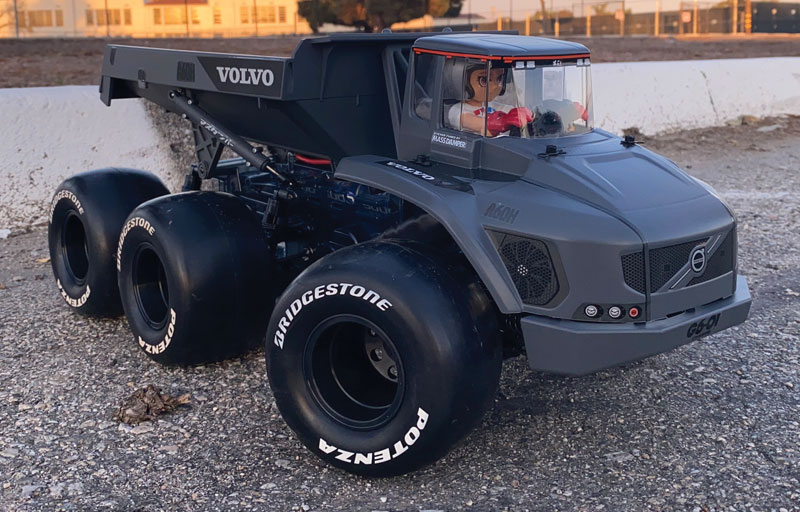 The real-life Volvo A60H is a behemoth of an earthmover. The articulated hauler is over 40 feet long and almost 13 feet wide and weighs an astonishing 217,706 pounds. It can carry 61 short tons of cargo and is powered by a powerful 16-liter diesel engine. Suffice it to say with all six wheels powered, that the A60H is designed for severe off-road operations. Like its namesake, Tamiya’s 1/24-scale version promises to do much the same, albeit in a scaled-down manner Tamiya’s A60H is based on their G6-01 chassis, which is shared with their popular Konghead 6×6 semi-truck and whimsical King Yellow 6×6 school bus. The proven G6-01 chassis is based on a robust, slimline monocoque frame that is the foundation to a capable 6-wheel drive system. The drive system is gear driven for maximum power transfer with its 540-size motor mounted just behind the front wheels. The completely sealed gearbox is built right into the chassis itself and has built-in front, center and rear differential gears to provide smooth cornering.

A big vehicle such as this requires a smooth ride as well. That’s accomplished with the help of a six-wheel double wishbone suspension that is fitted with friction dampers. An outboard mounted servo helps steer this beast with a two-piece steering tie-rod setup. Interestingly, the A60H can be made four-wheel steerable if you have a 4WS capable transmitter that can steer the rear wheels. 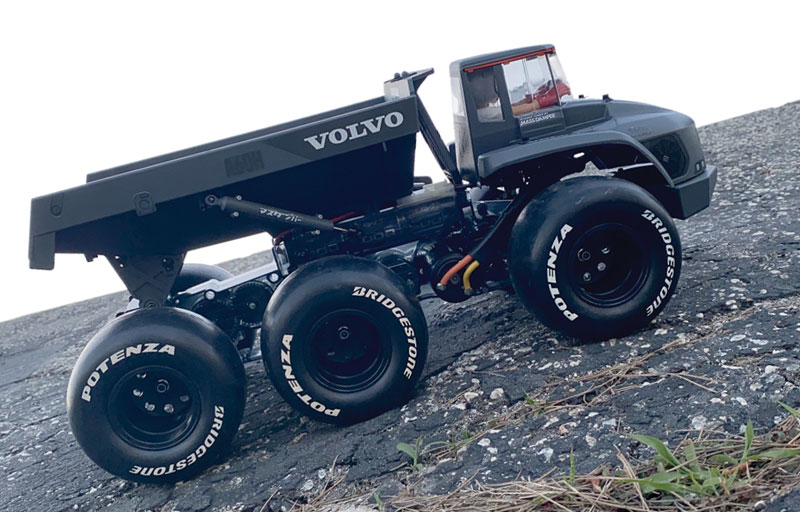 The Volvo A60H comes in a standard construction yellow hue and as you can see, ours is painted in a shade of gray that Tamiya calls German Grey. No doubt this color is meant to coat their WWII tanks, but we thought it would make the A60H look meaner and by all accounts, it did. We enjoy flexing some creativity by not following box art at times.

We also enjoy hopping up everything we get our hands on and the A60H is no different. We started with replacing its factory chassis with a clear gray option that allows you to see the gears hard at work. We then swapped out the stock silver can motor and mated the gearbox to a Tamiya TL01 21.5 Brushless Sensored Motor for some extra power. This truck clearly isn’t a quick mover for the 21.5 would do just fine. To smooth things out, we also installed a set of Fast Eddy G6-01 sealed bearing kit. We find Fast Eddy bearings perform smoothly and are priced just right.

Electronics include a host of Futaba items including a S3470SV servo and R603FS (FASST) receiver. Because the servo sits outside the chassis, we decided to also add some extra protection for it in the form of a Reefs RC Servo Guard. Tying all of it together is a Futaba 4PK 4-Channel 2.4GHz FASST radio transmitter.
You probably noticed the sweet looking, nonsensical tires that we installed. They are made by R31 House and they’re called Kart Tires. These Bridgestone licensed tires are mounted to Deep Kart Wheels made by the same company. They are slicks and provide little in terms of actual grip, but tons in the look department. If you’ve never thought about a racing 6×6 construction vehicle, well here you go. Their bulbous-ness contributes to the fun aspect, which we’ll get to in a moment. 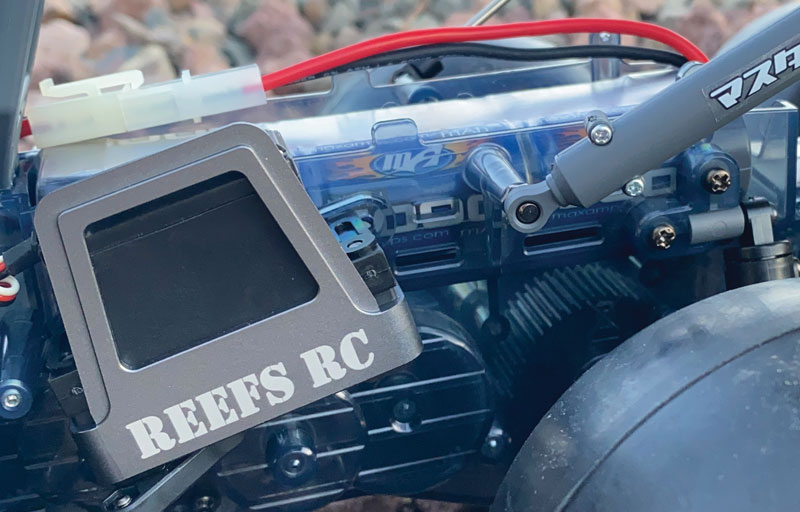 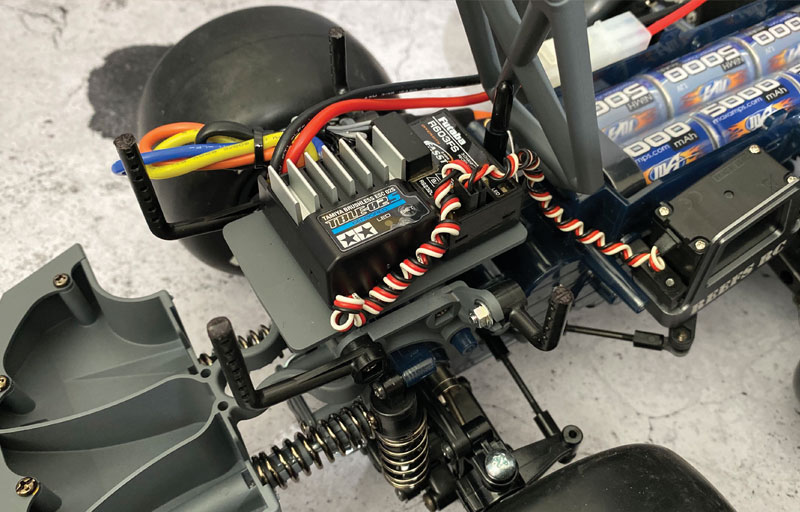 After an initial shakedown, we took the Volvo out to several types of terrain including asphalt and dirt. The truck crawls powerfully, but slowly. Hey, we didn’t expect to enter this in a race anyhow. What it does deliver is a ton of smiles. It’s fun to see all six wheels work in unison and the shape of the body looks great. We stuck a driver figure out of a Tamiya Comical Hornet to add to the fun looks of the vehicle. Its bed can manually be manipulated Tonka truck style to dump out any load that you choose to throw in it.
The A60H as configured was extremely competent on asphalt, which was to be expected, but interestingly, it also gripped well on loose dirt as well. We say that because we ran it on the aftermarket slicks and not the deep lug truck tire it comes with. Perhaps it’s the six-wheel drive and hefty overall weight of kit that helped it maintain loads of grip. The heavy weight of the MaxAmps NiMH 5000 mAh battery we used certainly helped pin down the tires as well. 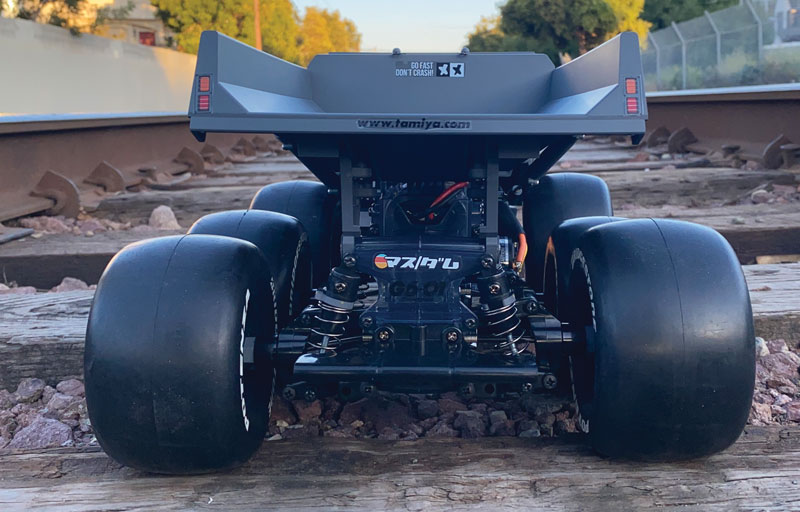 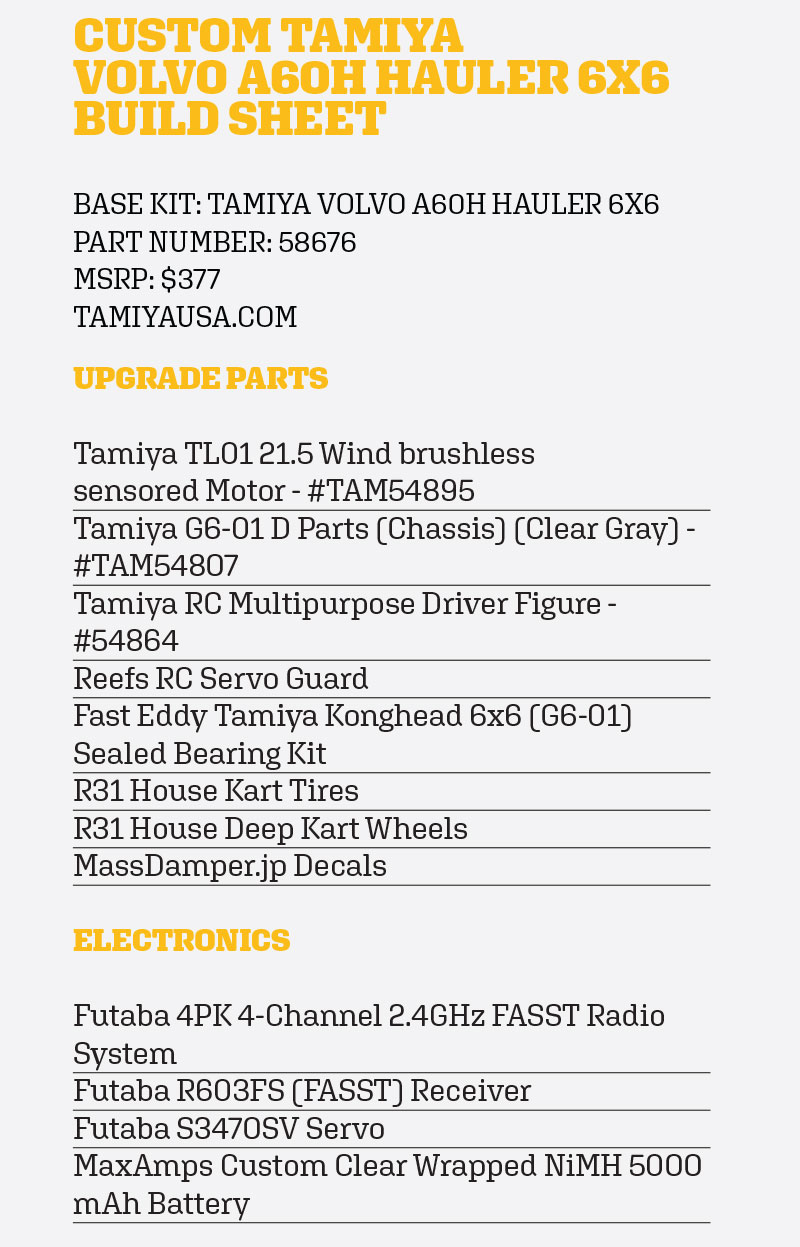 We found Tamiya’s Volvo A60H Hauler 6×6 to be a real crowd pleaser. In terms of looks and driving capability, it’s a fun and unique kit that brings smiles to those who encounter it. If you’re looking for something other than your regular car or truck, perhaps an articulated hauler is in your future.