Drifting; its fresh, its fun and we in the U.S. are catching on to the hottest competition from Japan.  If you don’t know what it is, you soon will as there are more and more events coming to a parking lot near you. Sliding your car sideways is here to stay. 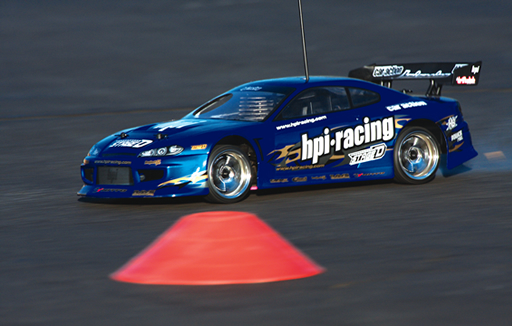 The idea is easy to understand but can be tricky to master; get your car as close to the marked areas on the course at the most extreme angle possible as fast as possible, mix in a bit of crowd reaction and a second car to go up against and stay as close to it as you can, now you’ve got the makings for a great time! Yokomo could be credited with having the first real dedicated drift cars available but there are now RTR kits available from HPI, Tamiya, Losi and others. Of course, there are a slew of hop-ups and performance parts that are drift-specific to go faster or bling out your newest obsession. There are a few hard and fast rules to follow when putting on a drift event. Whether you’re judging, racing or holding the event, here are a few of the basic…

Scoring: this is extremely dependant on your local track. Because this is an up and coming sport, scoring can be objective and not everywhere is going to have 40 guys trying to qualify, in fact most places you won’t even have to worry about it. You show up, you race. But it basically breaks down like this; judges will score a on a 1-10 point system. Speed, angle of attack, smoothness of your lines, crowd reaction, car style all are all (or should) be taken into account.  If you have 16 people, you go head to head until there is the top 8. Top 8 go head to head to get the top 4 and so on. Opponent: this is how it breaks down. There are two cars competing at a time. One car leaves slightly ahead of the other, taking the “lead” position. The “lead” car is the one that dictates the pace and speed of the round.  It is the job of the second or “chase” car is to not only keep up with the lead car, but to also mimic the same angle of attack of the lead car. Passing is only allowed if the chase car can do so without interfering or touching the other car. While it is nerve-wracking to try to copy, in effect another’s driving, but to be in the lead car is equally intense as you push it as hard as possible while keeping a tight, smooth line and knowing the chase car is waiting for you to slip up in the slightest way to make a move on your spot. Tell me you’re not pumped just thinking about it! Angle: this is the most important aspect of drifting. Breaking the back end of the car loose is critical to a losing or winning score. There are a few ways to get the back end out; the most effective way is punching the throttle as you steer into the corner. As the back end starts to break, roll off the throttle slightly so the rear doesn’t come all of the way around. There is the feint, a rally racing move that works like this, as you approach the corner, turn away slightly from the corner and then fully lock to the opposite (into the turn)while remaining steady on the gas. This is an advanced move but when pulled of properly, looks so smooth and controlled.

Speed: while secondary in judging, it is still important to carry as much speed around the course as it will help propel your car into and through the clipping points. Smoothness and control are the name of the game. In 1:1 drifting, “the initial d”(or drift) includes  radar checked speed into the first turn as part of the overall qualifying to determine the “top 16” to carry on in the event. Clipping points: the clipping point(s) are predetermined, marked areas in certain corners or turns where judges and fans alike are watching for the driver to get his front bumper as close to as possible without actually touching the point. Generally speaking, the tighter the turn, the smaller the clipping point. Long sweepers may have several feet of clipping point but a tight hairpin may only have a few inches.

Crowd reaction: while this may not seem like a big deal, judges are listening for how the crowd reacts to the car/driver. Flashing L.E.D.’s , deep angles and speed will get the crowd going and the judges take it into account. Course set up: this is as varied as there are drivers. You don’t need a huge track set up to drift. A few Losi track dots or some halved tennis balls and a smooth patch of asphalt or concrete are all you need. Try to set it up with a long first sweeper that tightens up at the end to slow the cars down and make them set up for the next turn/corner coming up. Just a few turns are all that you need. This allows for both drivers and spectators alike to have a good view of the track and action. Car set-up: I’m not gonna bore you with another drift tire how-to, but I’ll give you the basics to transform your touring car (that’s been collecting dust on the shelf) to see some track time.

1)      Stiffen up and drop it into the weeds. You want the car to remain as flat as possible to help the car get sideways.  Lowering the car as much as possible will also help to control the car when it is sliding. Excess body-roll will let the car “load-up” on the outside when going into the turn, then when it cant roll anymore it will cause the car to slow down or stop, and in extreme cases, straighten out.

2)      Giving the front a bit of extra camber will help to initiate your drift easier.

3)      The old saying style IS everything and its “go over the top” in drifting. Fat lip wheels that are replicas of real car wheels by Rays, B.B.S., Volk and others. Motion activated L.E.D. brake disc lights, L.E.D. lights that flash, ones that activate when you brake and even parking lights when you stop! These and even under neon are all readily available, most notably from Yokomo and Tamiya. There are other people out there making great light sets, so scour the drift forums and you’ll find them. The best part of this is the aspect of night drifting. The lights really ad a feeling of realism to the mix!

4)      Throttle control: sounds simple, but drifting requires you to develop a completely different driving style. Smooth and even throttle “rolling” is critical. Usage of the brakes has to be fluid with no big stabs at it as that will certainly end a drift.

5)      Tire choice has greatly improved in the last couple of years and there are many choices of tread patterns and harnesses of compounds. The surface and your driving style will decide the tire for your needs, and thankfully rims and tires are cheap, so it’s easy to have a few sets around for different places you may go. Every drifter should have at least one set of A.B.C.(black) or P.V.C.(white) pipe practice” tires” on rims. It is much easier to learn to drift with the slippery plastic “tires”. You have to drive much slower, and this makes your moves much more deliberate and easier for your hands to “remember’. Practice figure 8’s around a couple of track dots to learn smooth transitions from left to right and back again. Start with them about 5 or 6 feet apart. As you progress, spread them further apart to increase your speed. Try to do a complete “8” drift in one continuous motion. Seconds to learn, years to master! The plus is also that a 3000mh battery pack will last 30 or 40 minutes! P.V.C. is a great learning and practice tool.

This covers the basics of what you need to get the drift bug rolling and give it a try. Pull that touring car down, make a few adjustments, call your buddies and throw down the challenge and go have some (new) fun, or hook up with a hot new RTR drift kit that’ll have everything you need to get drifting for just a couple hundred bucks!