The Axial Deadbolt has always been a favorite truck of mine. Its unique looks and simple, straightforward design have been the basis for many of my builds over the years. It is an easy truck to work on, has always been dependable, and is capable on the trails. But what if you don’t want to drive it off-road? What else is this iconic rock crawler capable of? Could it be an on-road speed demon?

I was willing to take on the challenge to see how fast I could make the SCX10 II platform go—hence, the name: DragBolt. Ultimately, the Axial SCX10 II was never meant to go fast because crawlers are built for, well, crawling—as I found out when I checked its baseline speed with my GPS Speed Tracker: 7mph. Yep, you read that right. Seven. That’s the top speed of an Axial SCX10 II Deadbolt on 3S LiPo straight out of the box without any modifications. I was in for some serious upgrades and modifications if I was going to squeeze any kind of real speed out of this crawler. At the end, I wanted to see if I could crack 60mph. A lofty goal, but was it within reach?

ON-ROAD SUSPENSION
I wanted to make sure this truck was as low to the ground as possible, so I swapped the stock shock setup for 60mm Traxxas 4-Tec touring-car shocks. The firm springs would also reduce the amount of shock travel, which would result in a firmer and more predictable ride that’s more suitable for the smooth tarmac I was going to be running on.

POWERED UP
I upgraded the stock speed control and 35T brushed motor to the Mamba X speed controller and a 3800Kv brushless sensored motor, courtesy of Castle Creations. The added power was definitely going to be a handful—especially on 4S. I upgraded my battery to a 4S graphene LiPo battery from my friends at Helios RC, hoping that it would be enough “oomph.” 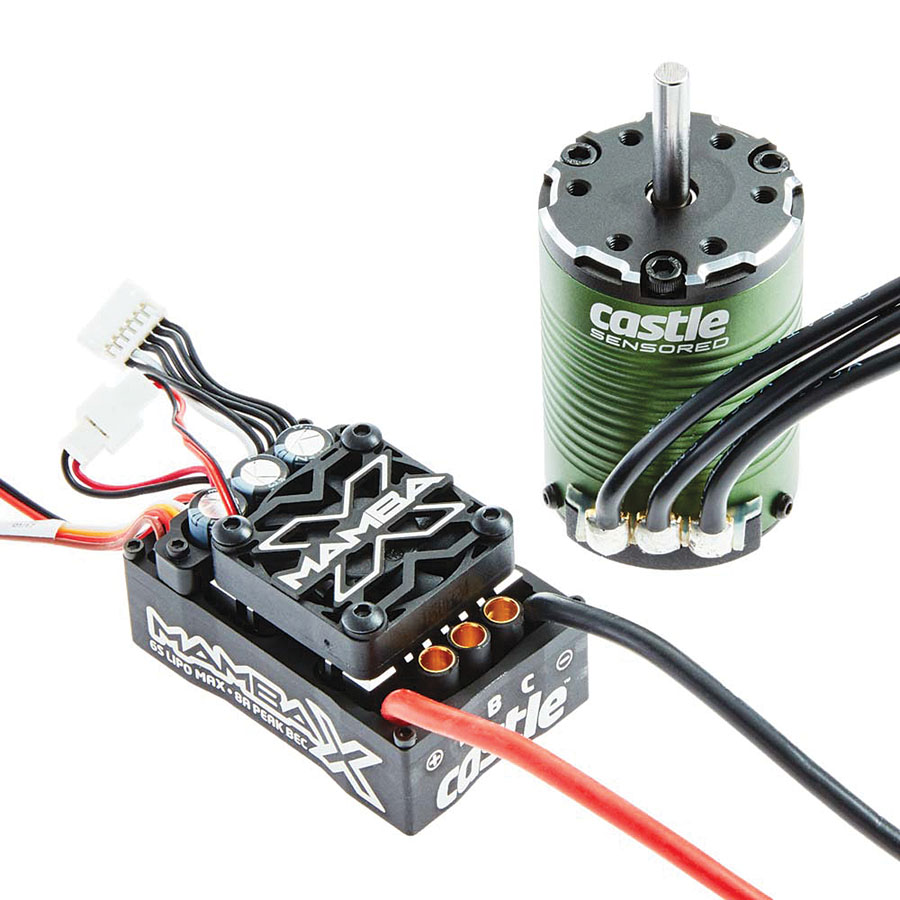 HIGH PERFORMANCE STEERING
Handling at these high speeds is paramount as you don’t want to hit an obstacle at 50+mph. Initially, I had difficulty keeping the truck under control with the stock chassis-mounted servo. It just didn’t want to drive in a straight line, so I upgraded to a Spektrum S6340BL digital servo to turn the tires. I contacted UCFab to get a servo-on-axle setup to aid that servo and keep my truck straight. This also helped get weight down even further. And the final piece of the puzzle was to get Spektrum AVC for more predictable handling at high speed; without it, it would be impossible to keep the vehicle straight. There would be so much downforce being created that any steering input would result in a massive spinout, which would usually end in a traction roll. 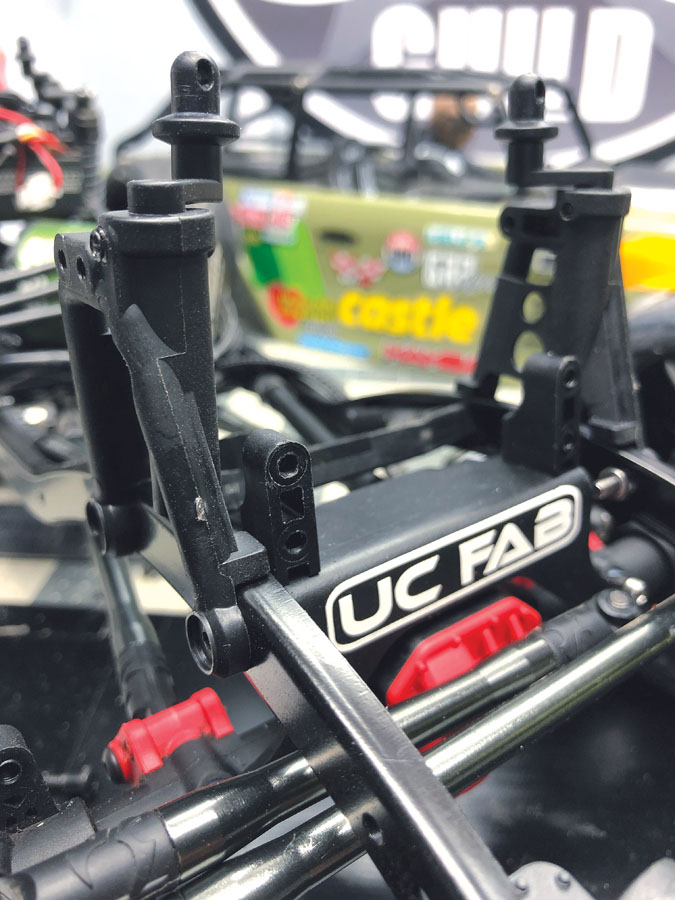 The servo is now mounted directly to the axle thanks to this mount, which will make the truck’s steering more precise.

ROAD-READY DRIVETRAIN
I set my sights on swapping out the transmission, as the reduction provided by the stock gearing would have made high speeds difficult to achieve. My first swap was to an Axial Yeti transmission because it has less gear reduction, which means more speed goes to the axle. You have to make use of all the power the motor has to offer, and putting more of that power straight to the axle and sacrificing torque is the best way to do it. We’re not trying to go over obstacles any longer—we want to scream past them! The next major evolution to get the most speed out of my Deadbolt was to use the center differential transmission from an Axial Exo, with a 25T pinion mated to a 48T spur and with rear-wheel drive only. Finally, to make the driveline as efficient as possible and therefore make my truck faster, I opted to go direct-drive, where the motor’s 5mm output is mated directly to the rear axle. The axle’s ring and pinion offers a 3.75:1 ratio, so that’s the only reduction that went into the system. Maximum speed!

I mounted the motor as low as possible in the chassis and connected it directly to the rear axle.

SPEKTRUM CONTROL
The RTR transmitter and receiver that came with my Deadbolt are fine for the trails, but I wanted to make sure that I had plenty of range and lightning-quick response for speed runs. I’ve been a big fan of the Spektrum DX5C since its release earlier this year. It’s an excellent budget radio with a deep feature set—and with 5 channels at my disposal, it’s my go-to for all my complex builds. Since I’m so familiar with it, it was the obvious choice for this build. 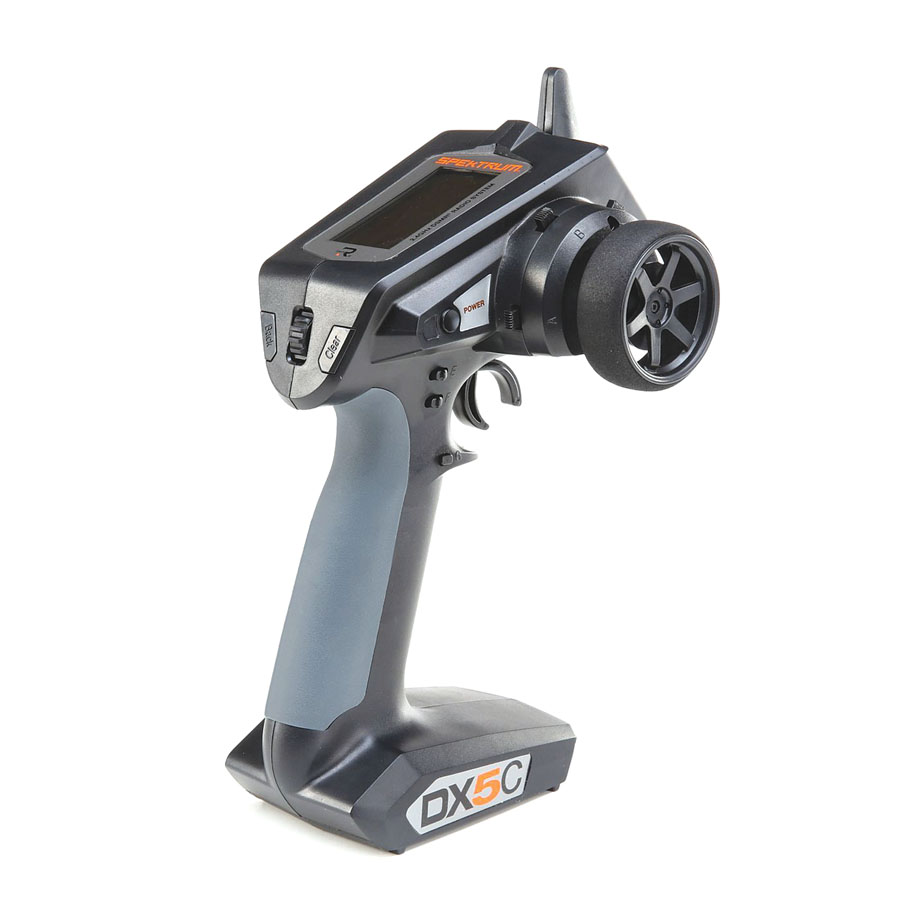 A Spektrum DX5C
radio gives me great range and reacts quickly to inputs.

TIRES
The tires on this build are a big piece of the puzzle. I first tried a front set of small 1/10-scale Vaterra on-road tires and a rear set of GRP Velocity 1/8-scale wheels and belted tires rated to 100+mph. The compound of the GRP’s was sticky, but I found in my testing that I couldn’t get the tires warm enough to effectively grip on the asphalt. I was testing at much lower temperatures (fall in Canada), and the tires weren’t performing to my liking. At speed, the truck would just spin out if too much throttle was applied, so I swapped for a full set of foam 1/8-scale tires from BSR. These tires instantly became a winner; they have plenty of grip on all surfaces and smooth, predictable handling. Spins would be a thing of the past! 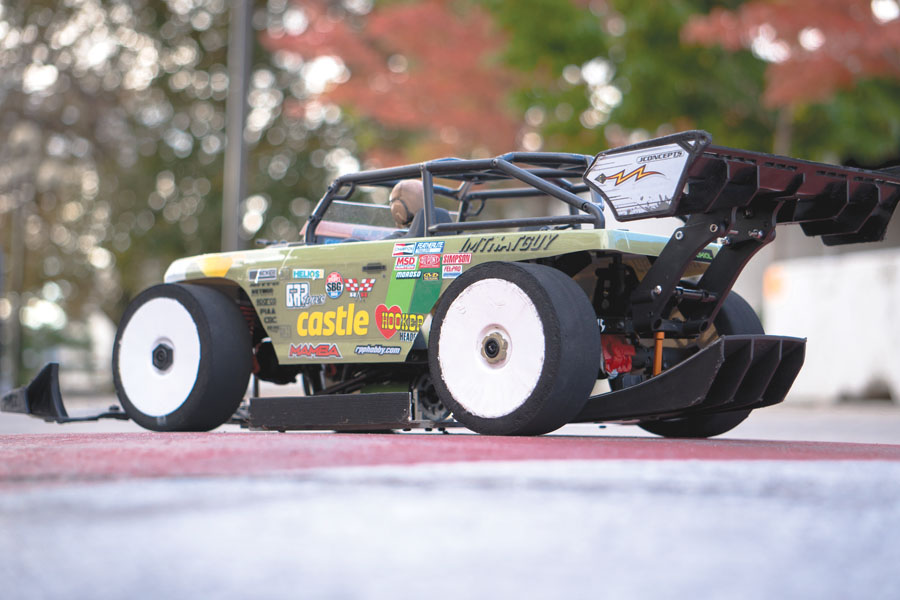 BSR foam tires are the key to going fast.

AERO CHANGES
Wings are mandatory on any speed vehicle, and this one was no exception. I found a great wing in the JConcepts Finnisher, and I mounted it all the way at the back to keep the extra downforce over the rear axle to help keep the tires planted to the ground. I added a complete fiberglass undertray to the chassis to keep air away from the underside of the truck. A massive front splitter and rear diffuser from a Traxxas XO-1 helped improve the truck’s grip. I figured that since that car could go 100mph, Traxxas probably knew a thing or two about aerodynamics. In an effort to get as much weight down low to give me a better center of gravity (CG), I moved the motor to the underside of the Axial skid, so it sat right on the undertray. This not only helped with CG, it also made a straighter line between the motor and the axle, making the system run more efficiently. I tried to increase the aerodynamics of the bricklike Deadbolt body by adding a plastic shroud, but it was so effective that the car got increasingly difficult to control at speed because of all the added downforce. Any steering input caused the truck to overcorrect, leading to some spectacular crashes and a lot of broken parts. I can’t tell you how many rod ends and driveshafts I went through. Getting rid of that extra piece was the best thing I could do, and despite the boxy nature of the truck, its fastest runs were accomplished with no additional body aero changes. 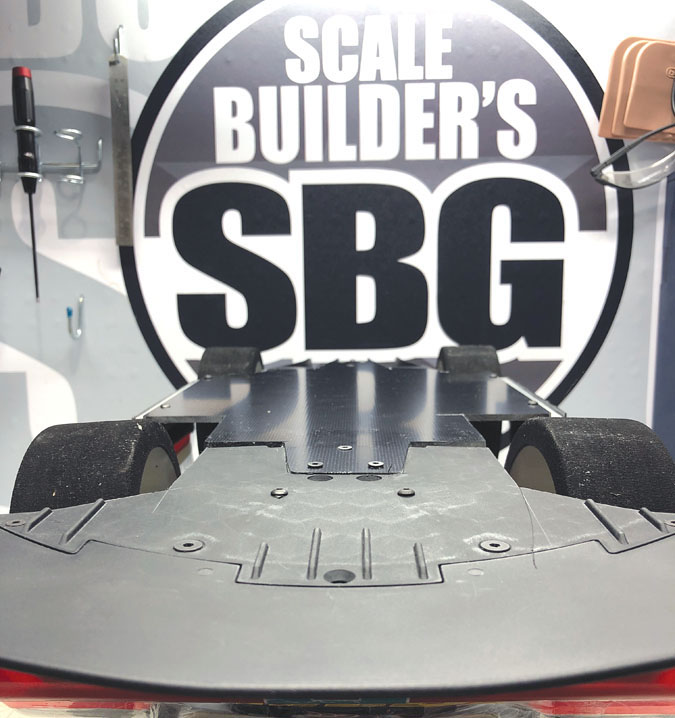 A custom-made undertray and Traxxas XO-1 splitters and rear diffuser help keep my truck stuck to the ground.

UNLEASH THE DRAGBOLT!
By no means is this a crawler any longer! Taking control of a truck like this is completely different from what you’d expect; mashing the throttle will result in a spin, and turning hard will result in a traction roll. I had to ease onto the power, and it required a long run-up distance to get to speed. This is no drag car. My converted Axial Deadbolt can handle the speed but requires a lot of patience and practice to get it around. That was the biggest learning curve for me: learning how best to accel­erate, and when to accelerate during each run. I reduced the amount of steering travel as well to reduce the possibility of a rollover as, honestly, turning is the last thing you want to do. Ultimately, I was able to get the truck up to a blistering 55.3mph, which is a little short of my goal of 60mph, but I’m still impressed and happy with the result. I’m new to the speed game, so it’s pretty amazing that a simple trail truck is capable of these speeds (with some minor modifications, of course), and I surprised myself with the results. Many pieces were broken, bent, or lost in the effort to get this Axial Deadbolt to go as fast as possible, but the challenge of making a truck designed to go slow instead go as fast as possible was really, really fun. 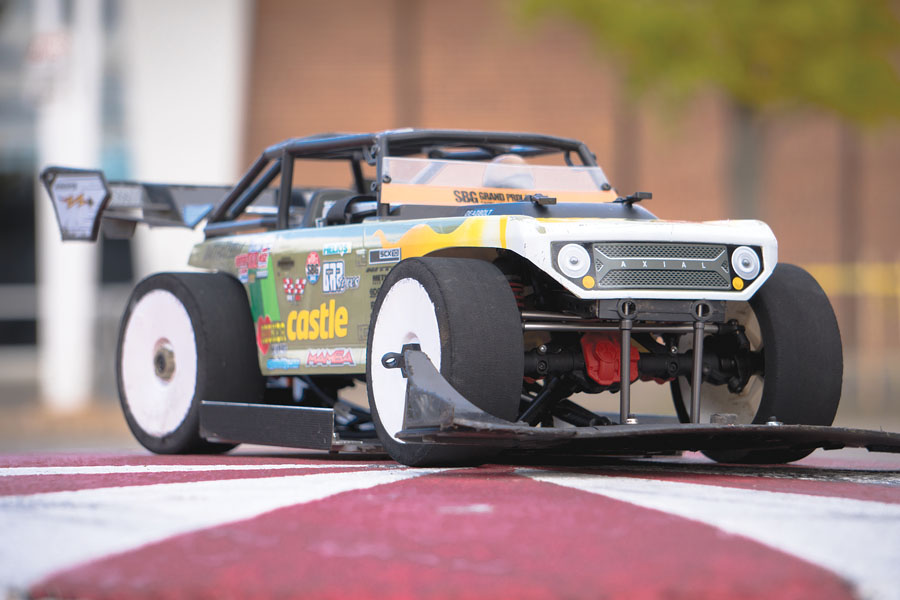 Meet Builder Matthew Kett
Since 2006, I’ve had a passion for radio control—specifically, scale-accurate RC trucks. That passion led to the formation of the Scale Builder’s Guild (SBG) web forum. The SBG has these goals in mind: uniting scale radio-control enthusiasts worldwide and providing an environment in which they can share their projects, knowledge, and talent. The SBG has evolved into the number one destination for scale-accurate RC builds. I’m a film editor by day and work on television commercials and online content. I live
in Toronto, Ontario, with my wife and three cats. For more information on the SBG, visit scalebuildersguild.com, facebook.com/scalebuildersguild, instagram.com/scalebuildersguild, or youtube.com/8imthatguy8. 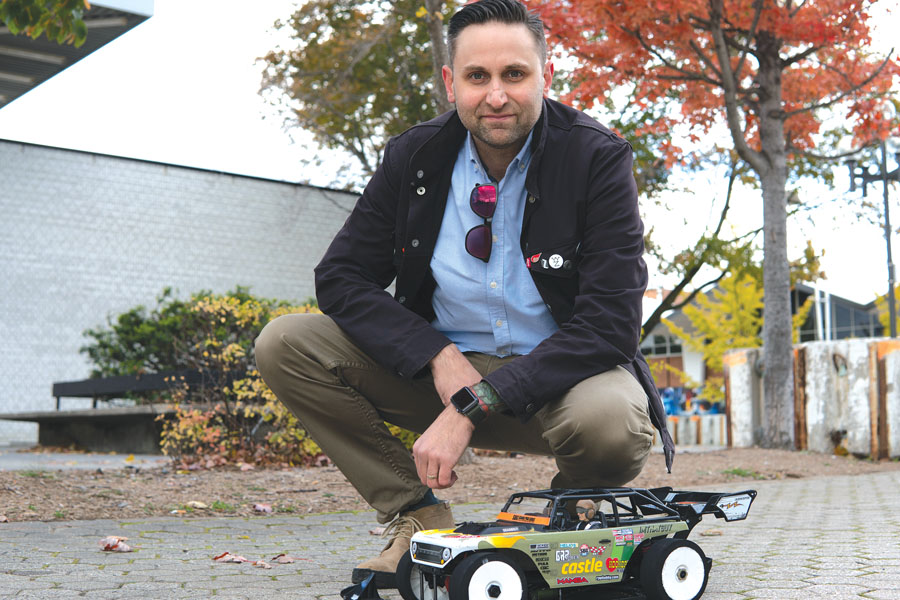