You don’t even need to get a good look at one to already know what it is. Even a quick or partial glance at a Chevrolet C/K pickup truck lets you instantly identify it. It is that iconic. The first C/K pickups were offered in 1959 as a 1960 model and, as history tells us, Chevy was really on to something. The C/K series of pickups was offered for an astonishing 40 years over four generations, with its final iteration being released during the 2000 model year.

The C/K may be unavailable at Chevy dealers now, but thanks to FMS, its greatness lives on in the RC world. Fans of Chevy’s C/K family of trucks can revel in this detail-packed RC pickup. This third-generation Chevy K10 is a highly detailed RC vehicle that’s as detailed as any static model we’ve had the pleasure of examining up close. FMS’s RC version of this beloved truck comes already built and ready to run (RTR) in a period-correct, two-toned red-and-white paint scheme with plenty of chrome accents. This RTR kit also comes complete with a transmitter and batteries. All you need to do is to drive it.

Used for both its commercial model name and factory internal model code, the C/K’s “C” denoted a two-wheel-drive platform and “K” indicated that the pickup was four-wheel-drive. Since the FMS chassis runs a four-wheel-drive layout, it made sense for this RC model to be named the K10. The detail may begin with the name, but it sure doesn’t end there. 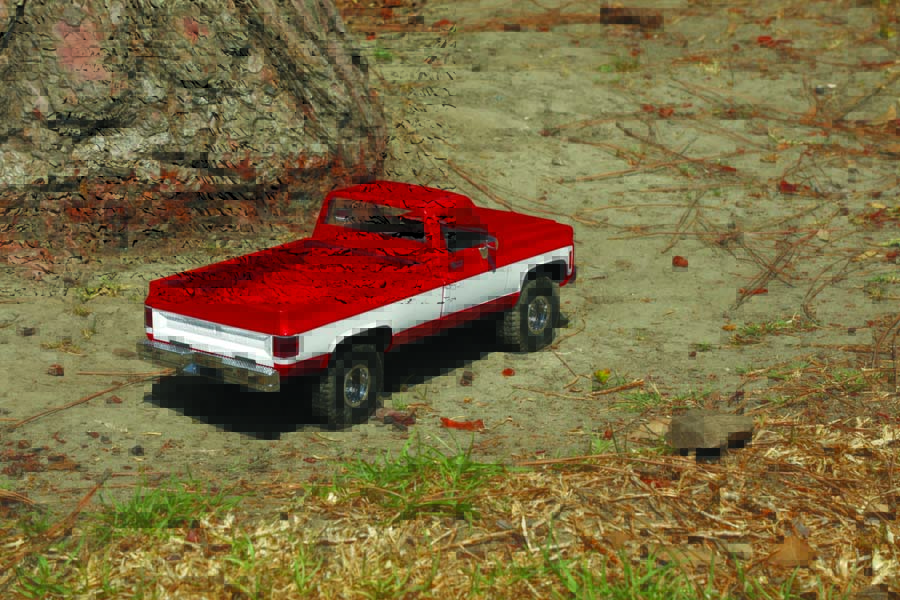 Detail Packed
FMS’s officially licensed Chevy K10 features a hard plastic body that features accurately molded, metal-plated elements such as a detailed grille, front and rear bumpers, side mirrors and more. This two-tone truck runs on classic metal-plated wheels as well with soft all-terrain-pattern tires that are suitable to run on any type of surface. It’s worth noting that FMS finished the body with an anti-abrasion and anti-scratch coating to help keep your truck looking like it just rolled off the assembly line even after more than a few adventures.

The K10 measures 12.75 inches in length and is finished in an outstandingly accurate 1/18 scale. The vehicle’s realistic foundation is based on a sunken frame and metal ladder-girder chassis. All this is topped off with aluminum frame rails and a reliable multi-link suspension system.

The K10’s hood and tailgate can both be opened. Looking through its windows reveals an ultra-realistic interior. The interior boasts accurate seats and dashboard appointments that even include detailed gauges. With all this in such a compact 1/18-scale form factor, you maybe wonder where all the driving gear is hidden. Popping the K10’s hood reveals the 050-type motor, ESC, receiver, power switch and battery inside the engine bay. Just open the hinged hood for full access. 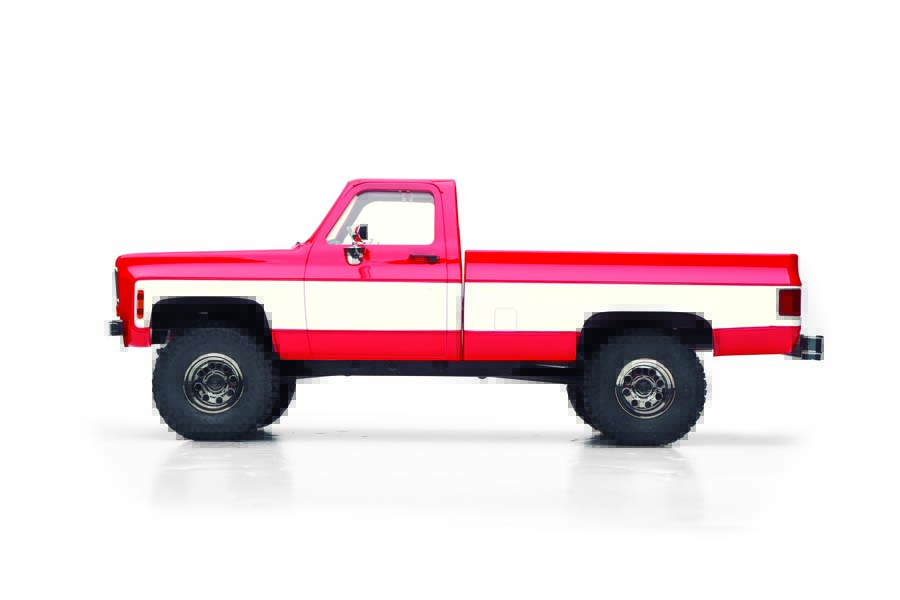 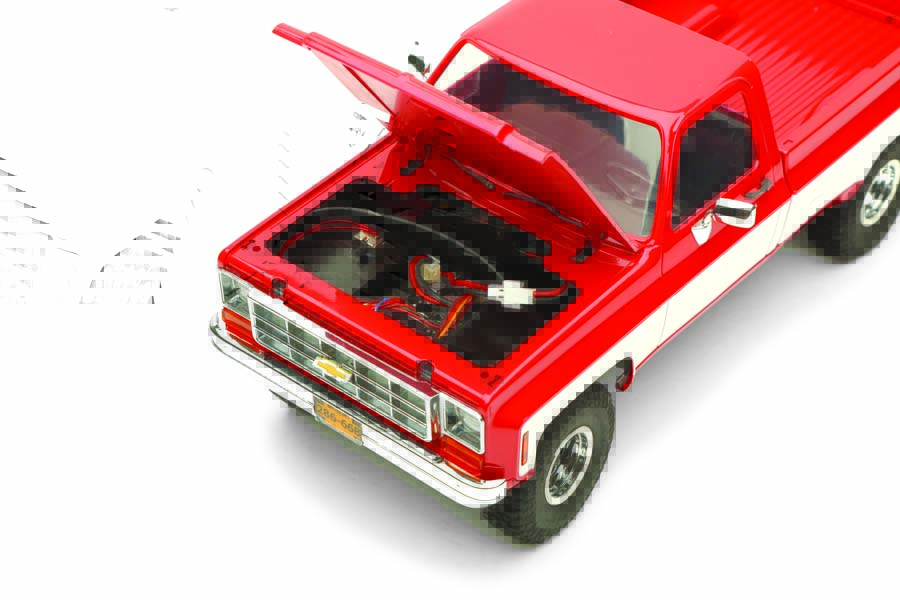 Pop the hood to reveal the K10’s inner workings. 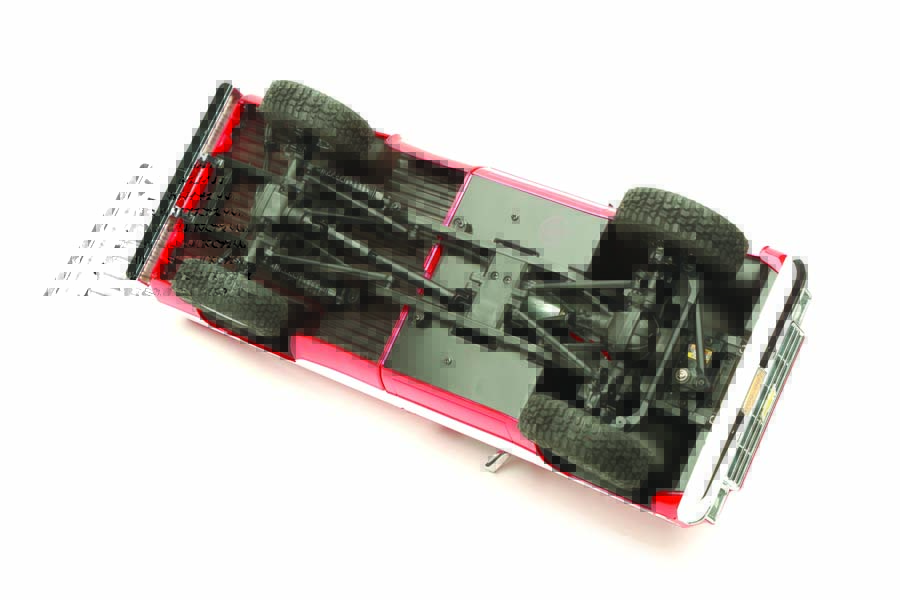 Even the underbelly of the K10 looks authentic and belies the fact that this detailed model is actually an RC truck.

Lighting always makes an RC look more realistic, and this third-generation C/K does not disappoint. LED lights are included with the K10 including headlights, turn signals and reverse lights that activate as you reverse. The lights are some of our favorite features of this ready-to-run truck.

We charged up the included FMS battery and visited our local park. When powered up, the K10 traversed both hard and soft terrain without issue. The classic pickup looked fantastic, especially with its LED lights on. The four-wheel-drive system allowed the truck to climb up moderate inclines, but its overall small size didn’t allow us to take it on more challenging rock formations.

We consider this scale K10 a fully detailed model kit that can be driven, and not necessarily a fully capable crawler. It’s not very fast, but it’s still plenty of fun to drive. The K10 really does look great while on the open road. 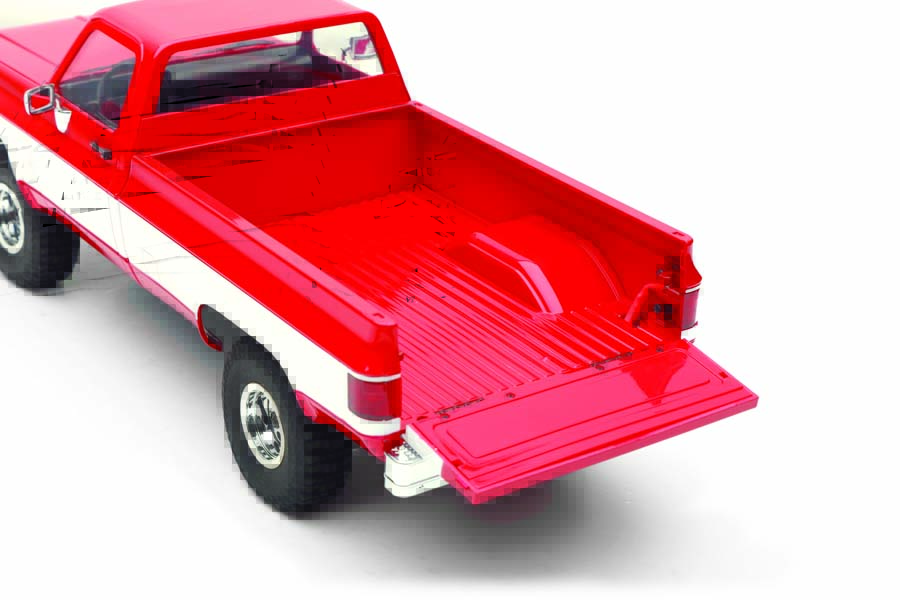 The K10’s tailgate swings down so you can load it up with your next haul. Bails of scale hay or even lumber, it’s up to you. 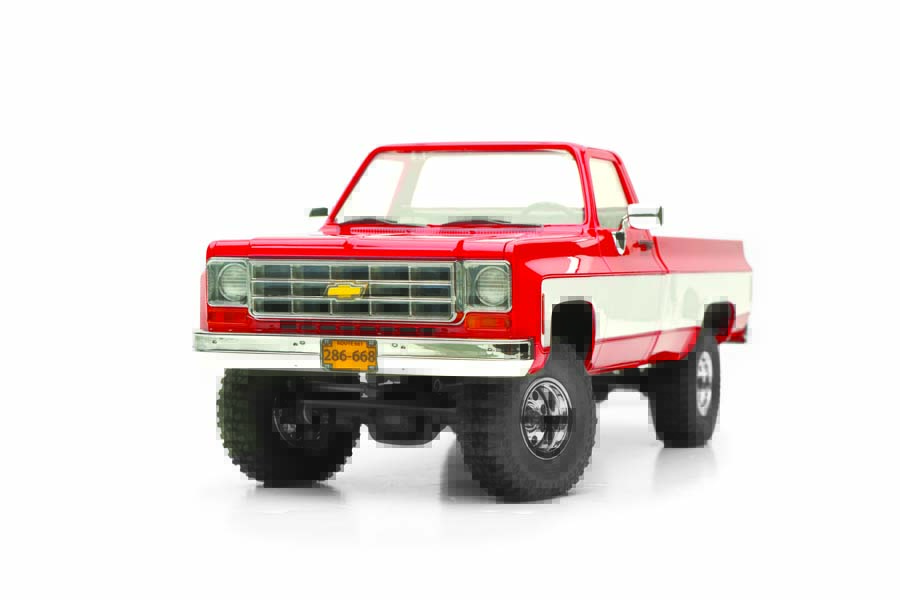 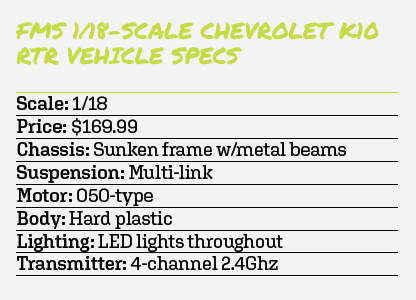 As you can see, FMS did a wonderful job with the Chevrolet K10’s accurate scale looks and life-like detailed features. It’s a highly detailed model that offers the benefit of being able to be driven like an RC vehicle. We really enjoyed not only driving it but looking at it, too. For those who prefer realism above pure crawling performance, the FMS K10 may be the pickup you’re looking for. As serious C/K fans ourselves, it was a no-brainer decision to snap up one of these to add to the RC garage.