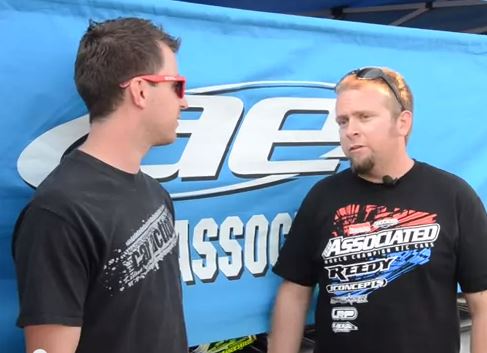 Not only did former Short Course National Champion Ryan Maifield sweep Friday’s rounds, but he drove his new Centro-converted mid-motor B4.2 to the second round TQ in Modified 2WD buggy. He talked about gaining experience with the new platform, what it’s like switching back and forth between classes, and the high-bite track conditions here at Silver Dollar RC Raceway.

Hot Bodies’ prototype D413 4WD buggy debuted in grand style yesterday, with Ty Tessmann crushing the field in both rounds in the car’s first public appearance on top of grabbing the first 2WD buggy round. In typical Tessmann fashion he was calm and collected about it all, instilling fear into the rest of the competition heading into Saturday’s final two rounds.

Hot Bodies designer Torrance DeGuzman was tight-lipped about the new D413 prototype, insisting that the car be shielded at all times while in the pits and leaving us only to take photos of the car in action. He shared a few details about the project’s progression, however, only whetting our appetite for more details on the ultra-fast buggy!

After two rounds, the biggest surprise was A Main Hobbies/ProTek R/C team driver Barry Baker – one of the oldest racers in the Modified divisions this weekend. After two solid runs on Day One he sat 6th overall in 4WD Modified and 11th in 2WD, giving him a great shot at qualifying for Sunday’s triple-A Mains to compete for a national title. As always, “the Fabulous One” wasn’t short for words on Friday evening for this hilarious and interesting 15 minute interview.