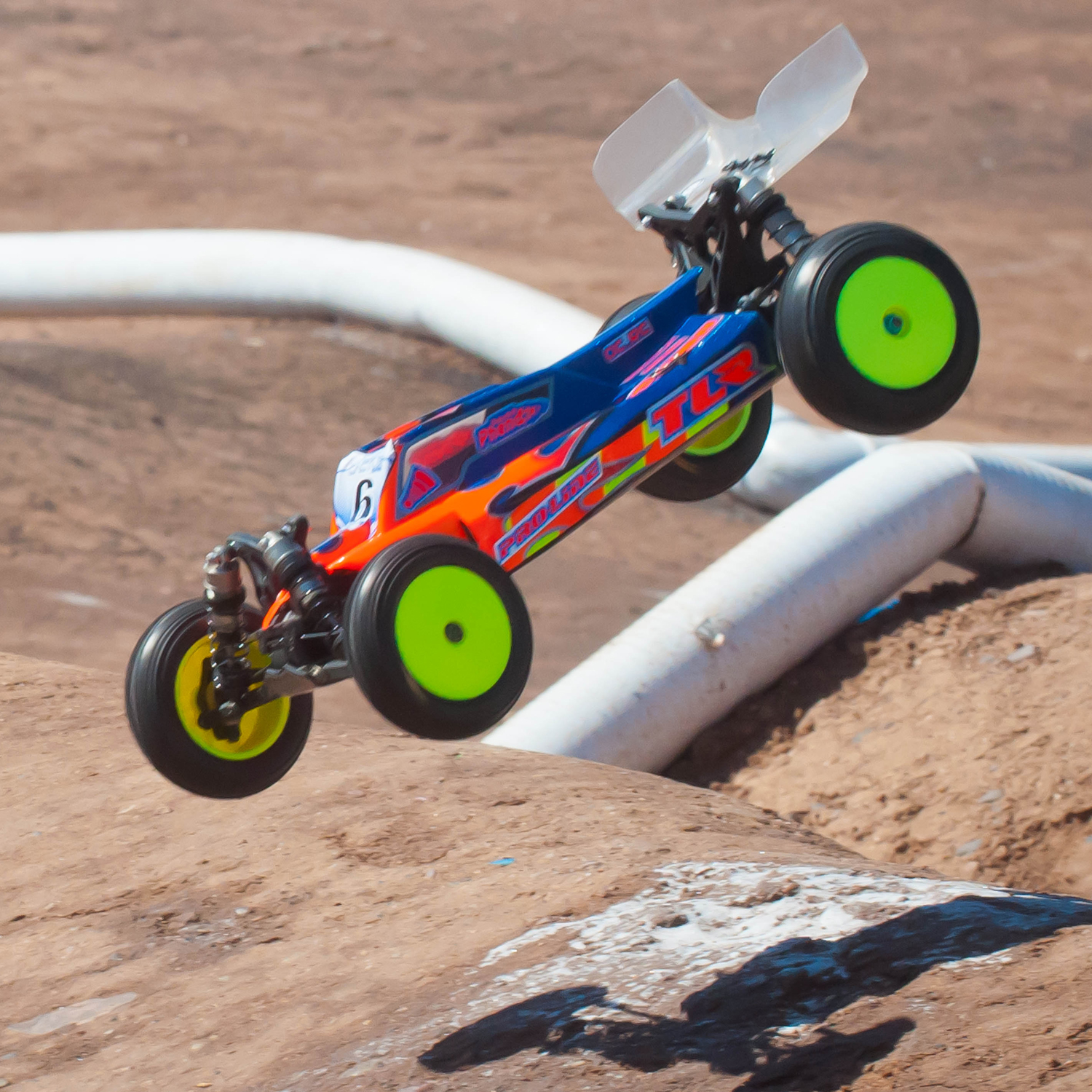 The 28th running of the Cactus Classic ended with what may very well have been the last set of main events to be run on the famous sunbaked outdoor blue groove at the current Scottsdale R/C Speedway, and what a day of racing it was. All five premiere-class titles were decided in spectacular fashion, and every spectator that lined the brick wall surrounding the surface today was treated to incredible, exciting on-track action. 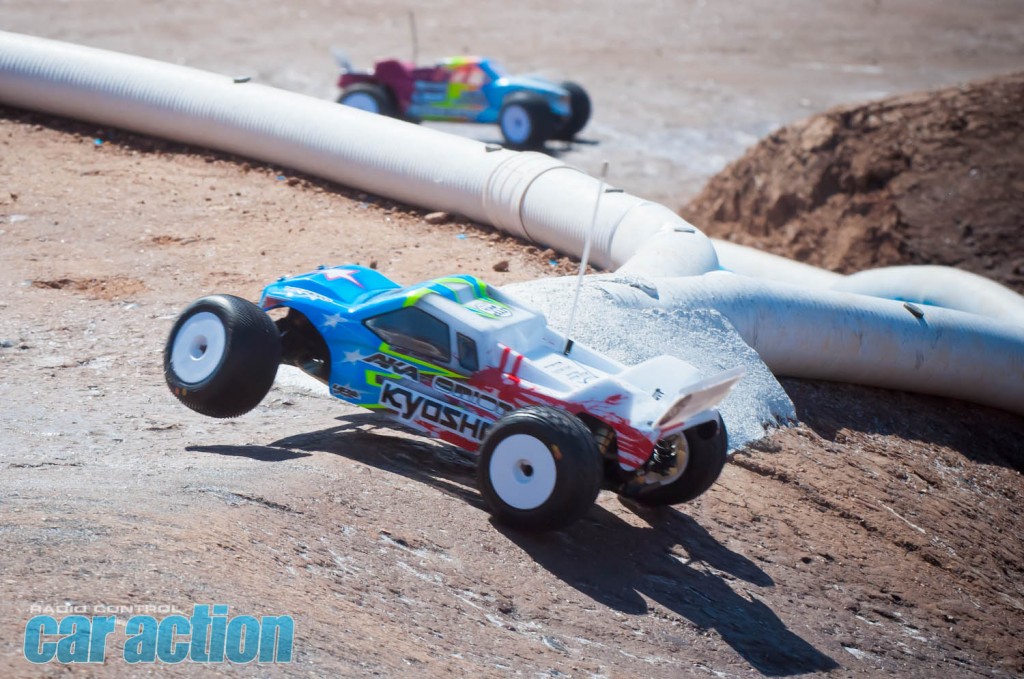 Top Qualifier Jared Tebo crashed early in A1 and ran into more bad luck with traffic afterward, relegating him to a fourth-place finish as Jörn Neumann inherited the lead; Neumann held off Ryan Cavalieri to take the round win. Tebo paced the field in A2 and won by three seconds to set up a showdown in the final main, and the two battled back and forth for the first half – until something in Neumann’s drivetrain let go. Billy Fischer charged within two seconds of the lead but couldn’t make a pass, and Tebo crossed the line to secure the overall win. 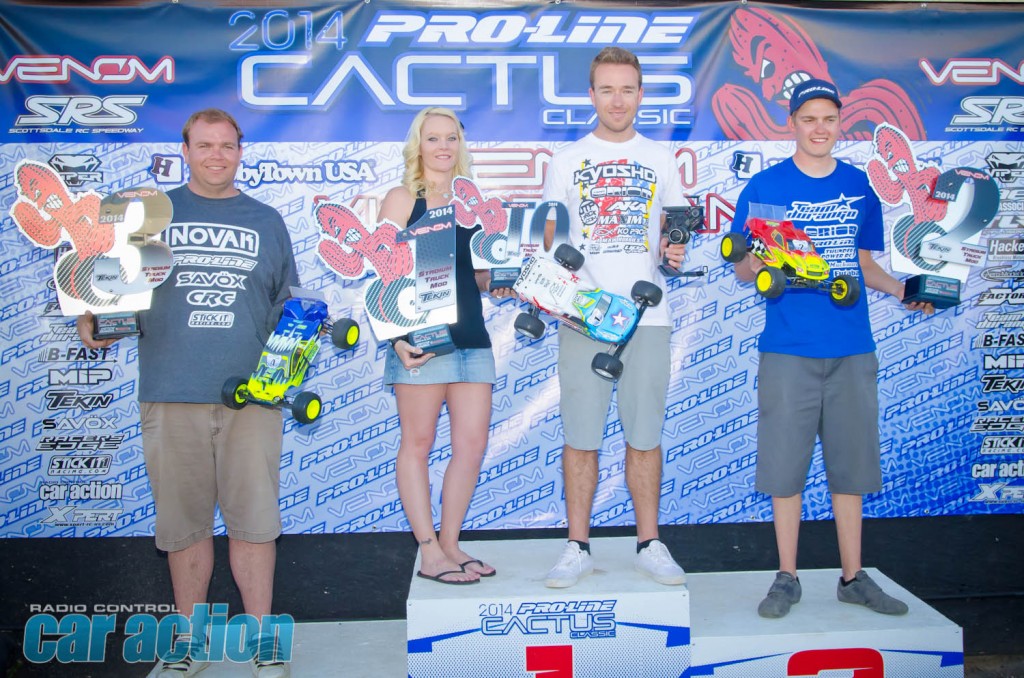 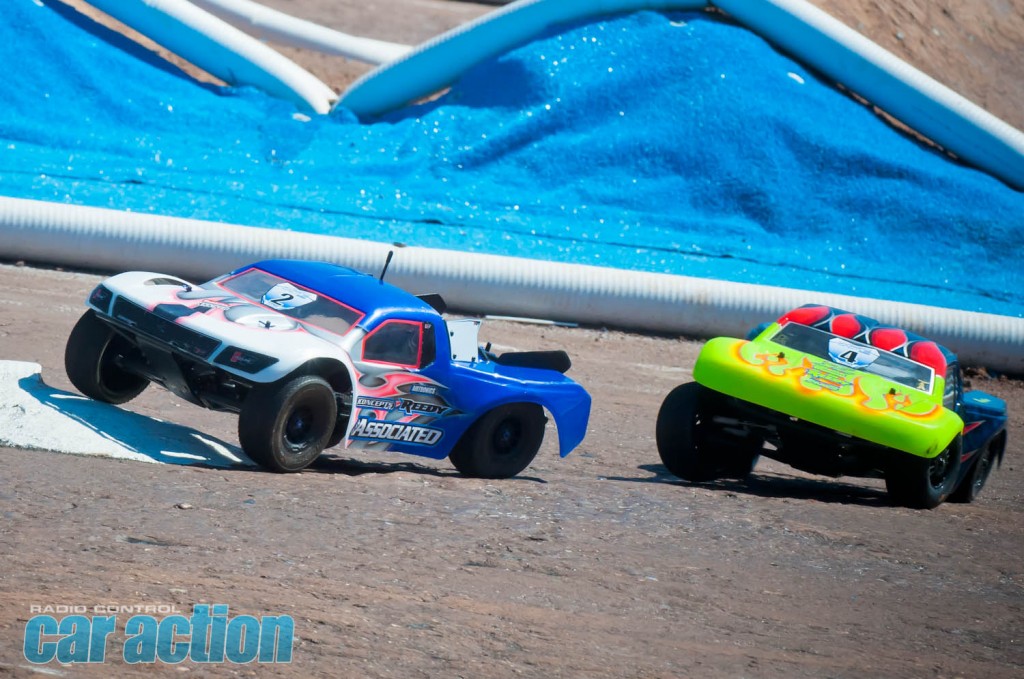 Ryan Maifield got the upper hand in round one by beating his teammate Ryan Cavalieri by just a half-second after a race-long battle, but ran into bad luck in the second round and finished third behind Cavalieri and fourth qualifier Travis Amezcua. Another race-long battle between Maifield and Cavalieri wowed the crowd in A3 as the two finished just 73-thousandths of a second apart, with top qualifier Cavalieri taking the overall championship. 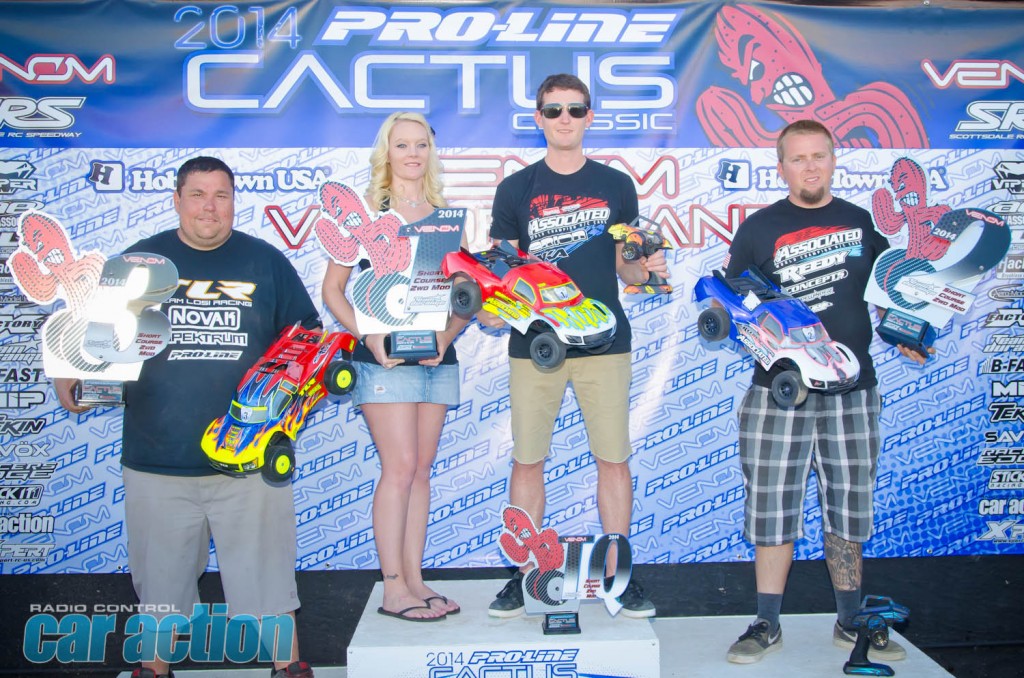 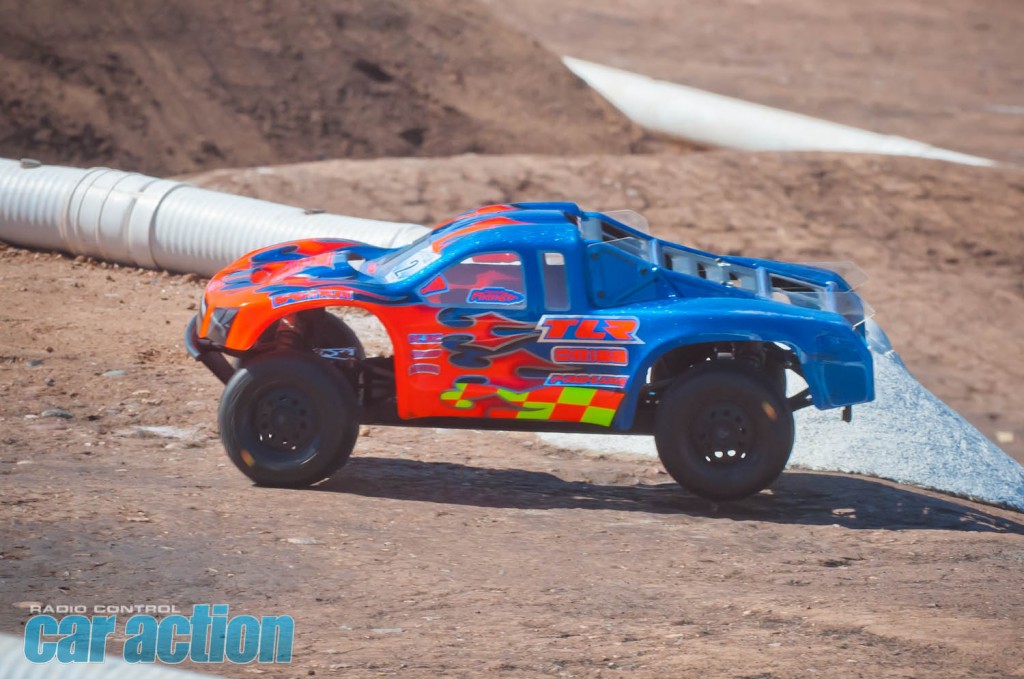 The sticky and rough surface of the SRS track layout proved to be too difficult for the 4×4 class, with very little opportunity to pass. The results tell the story – current National Champion Dakotah Phend successfully defended his title from last year after starting from the TQ spot on the grid, leading Team Durango teammates Jörn Neumann and Ryan Lutz in formation for the entire 7-minute main event without a single position change among the top three! Phend beat Neumann to the line by just over two seconds, with another two seconds separating Neumann and Lutz. 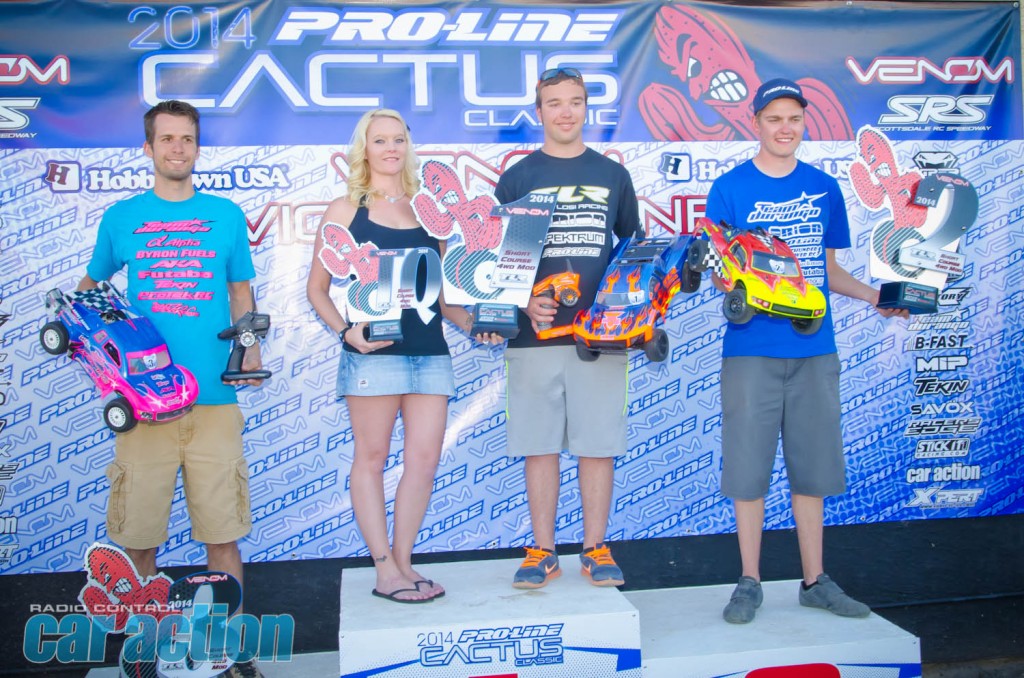 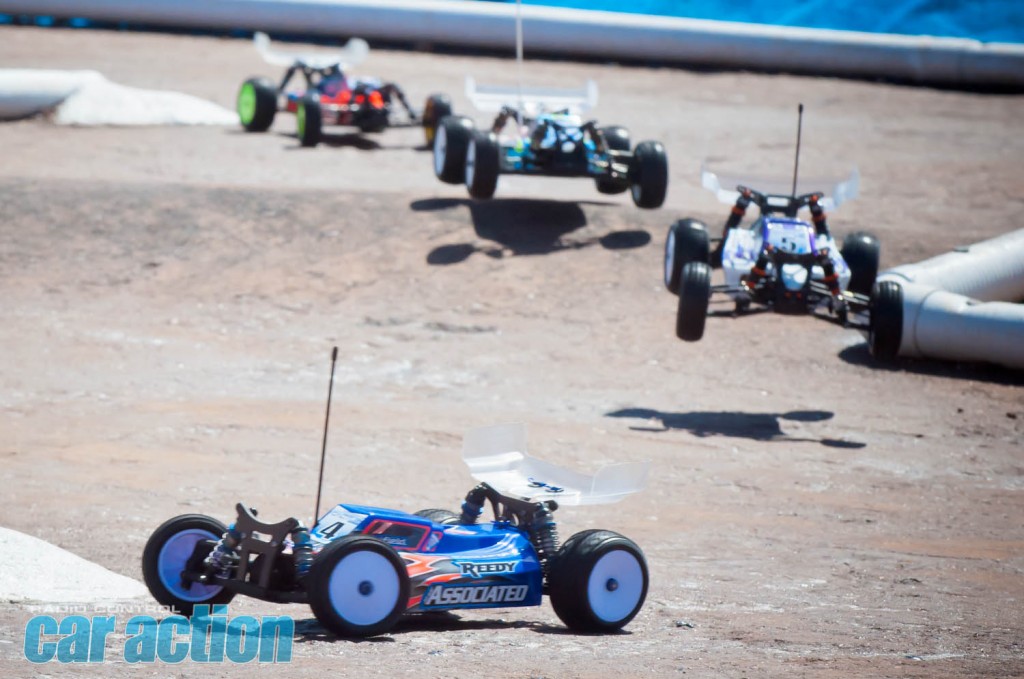 The drama in A1 for 4WD began before the start tone, as second qualifier Jared Tebo broke a front arm during warm-up and missed the start of the race! The craziness continued with TQ Jörn Neumann and third qualifier Dakotah Phend both wrecking early, giving Ryan Maifield the chance to swoop by to take the win. Early mistakes by the front runners in A2 again allowed Maifield to get out front, but a few mistakes of his own dropped him to fifth. Current National Champion and fifth qualifier Ty Tessmann survived the melee and worked his way up to take the leg win over the recovering Phend and Tebo, setting up an unheard of battle for the overall between the fourth and fifth qualifiers! For the first time in three tries, TQ Neumann had a clean race and won handily with the fastest time of the day, but Maifield held off a charge by Tessmann to finish a second ahead of his rival and take the overall win for the fourth year in a row! 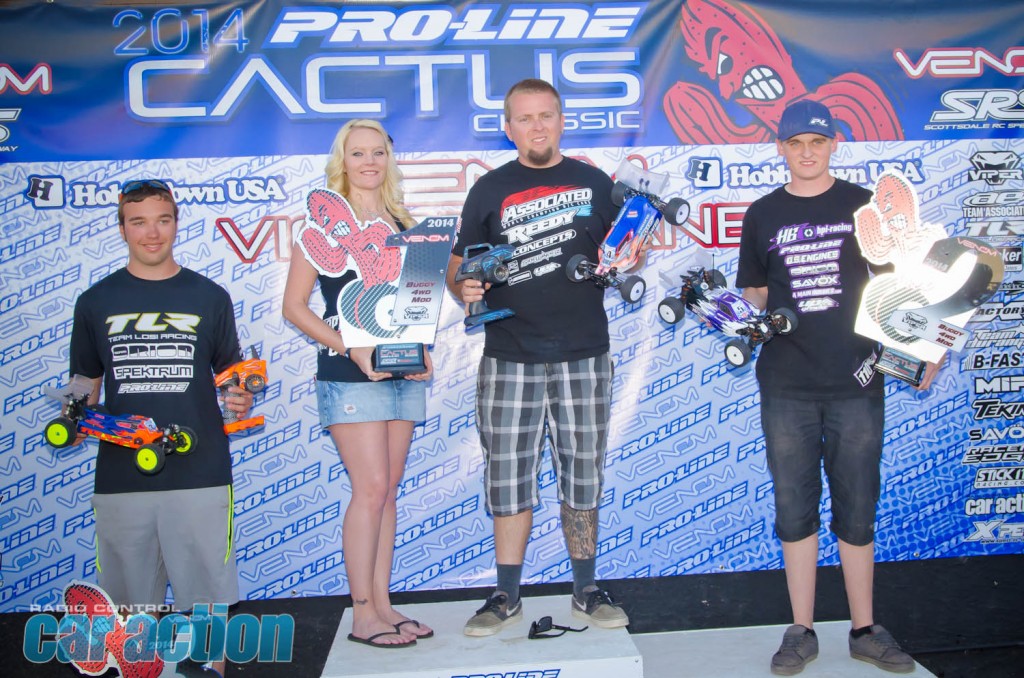 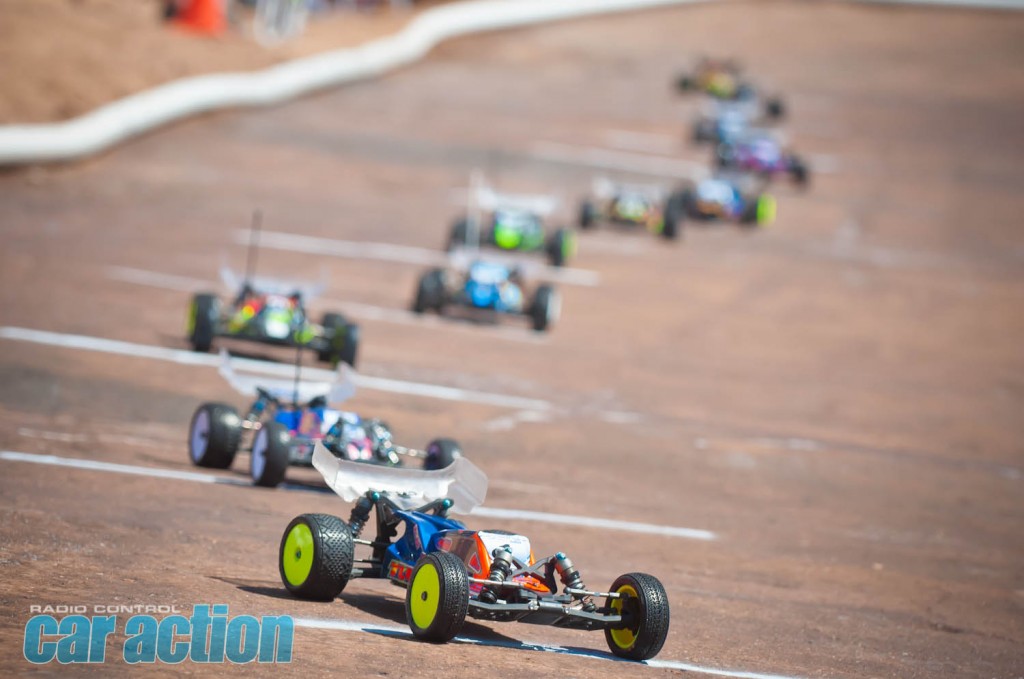 TQ Dakotah Phend got the start he needed in A1 and held off a hard-charging Ryan Maifield by less than a second and a half, and actually managed to pull away in A2 to win by nearly four seconds, wrapping up the title early and watching as Maifield won A3 over Ryan Cavalieri and Jared Tebo to secure second overall. Phend not only legitimized his ROAR National Championship from last year with a brilliant TQ performance and a resounding victory, but completed an amazing turnaround from last year’s performance in which he didn’t qualify for the A-main! 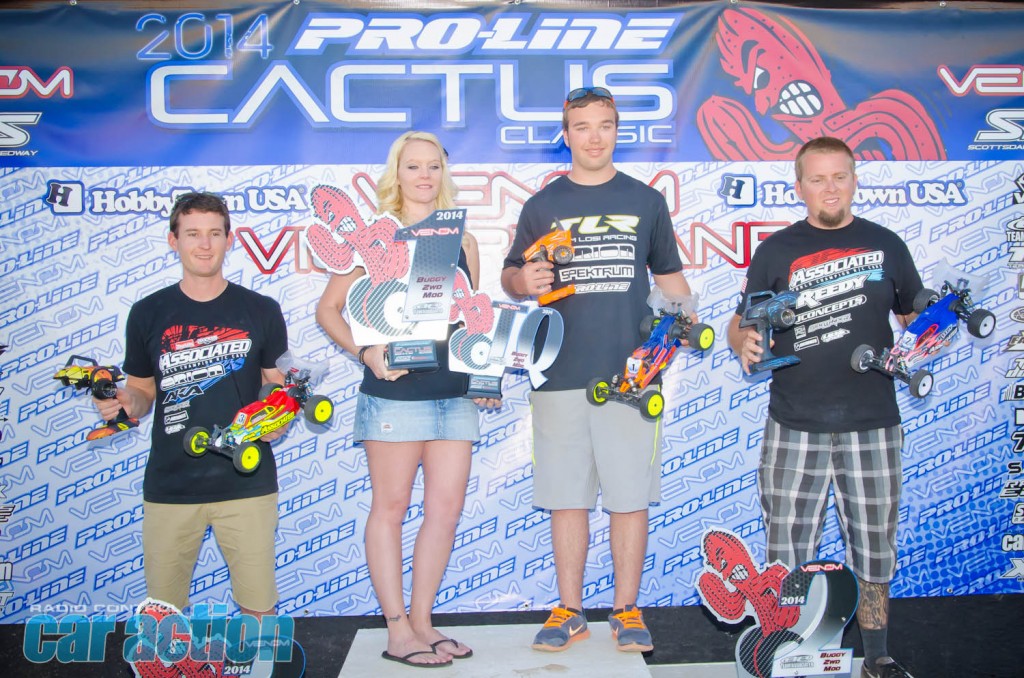 Are you a member of RC Car Action’s Premium Site? Click here to see an extended members-only photo gallery!