Ever since the Jato was released in 2005, Traxxas fans have been clamoring for an electric version. The first test of the truck in the June 2005 issue of RC Car Action included an interview with Traxxas’ Steve Slayden who stated, “I think it would be great to do an electric Jato.” It has almost been three years, and as a die-hard electric guy, I’ve not been waiting so patiently; so I decided to build my own electric Jato—2-speed transmission and all. As a side note, thanks to Ron at H&R Hobbies in Northfield, NJ, for his help in tracking down some of the parts used for this project. As for my custom creation, I believe you’ll agree that if Traxxas were ever to go electric with the Jato, this is what it would look like.

I started with a standard Jato 2.5 RTR. The aluminum chassis just would not do for this project. I designed my own chassis and fabricated it out of 3mm graphite from DA Graphite. I stretched the chassis 3/8 inch to allow room for a stick pack battery. This takes the wheelbase to the ROAR allowed max of 11.5 inches. The graphite chassis saved 44 grams over the stock Jato chassis in the process.

A set of Traxxas red aluminum turnbuckles, Integy hard-anodized aluminum ball ends and Traxxas billet front axles got the nod for extra weight savings. Tsais T-Bone CV driveshafts were installed not to save weight but to bulletproof the drivetrain. These shafts are beefy!

I fabricated a motor plate out of aluminum and 3mm carbon fiber. I wanted this plate to be strong enough to withstand high-voltage, low-turn motors. I used just the back portion of the slipper clutch housing to space the motor plate properly. The slipper clutch is the standard Jato unit with a 48-pitch spur gear from a Traxxas Rustler. The pinion gear is from Robinson Racing. I covered the gears with a RPM Rustler gear cover that allows access to the slipper-clutch adjustment.

This transmission freewheels while not under power, so there wouldn’t be any braking available from the motor. I used a Sullivan Gold-N-Rod cable designed for RC airplanes and used a Y-harness to tie the stock throttle/brake servo into the ESC. The brake works like a charm. The servo arm travels in both directions as you use the throttle, but the cable is allowed to float in the servo arm in the same way as the stock linkage does. To complete the install, I used the Jato spring and adjustment nut from the old linkage.

My motor and speed control selection was easy. A Traxxas Velineon VXL-3 system—of course! Power is provided by a matched 3800 8-cell Tenergy modified hump pack with a Traxxas High Current connector. The battery occupies the area of the old fuel tank and motor. The old receiver pack compartment lid serves as the hold-down. The speed control setup is Race 100 percent; no reverse with low-voltage detection turned off.

A Pro-line Crowd Pleaser 2.0 body tops off the Jato custom painted by Bill Zegers of Zegers RC Graffixx. I added Lexan carbon-fiber-look side skirts to the chassis to help keep the dirt out, and the inside lower areas of the body are covered with clear vinyl to protect the paint.

The next step for this project will be to modify the E-Jato to make it a race-legal truck with a single-speed transmission conversion. The truck will also go on a diet, receive a ball diff, 2.2-inch wheels with racing rubber and possibly a graphite upper deck, and the manual brake will be history. I might also perform some suspension modifications, but it is tough to improve on something that works this good. Ultimately, I look forward to hitting a track with my electric creation. 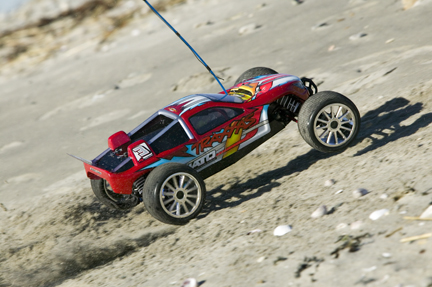 I was eager to see what my creation could do, and after some experimenting with different pinions, I decided to run the stock gear ratio. With this setup, when I punched the throttle from a dead stop, it wheeled right up onto the rear bumper (time to loosen up the slipper). The truck was also super fast! My initial testing was performed on pavement. When the truck accelerates and then shifts, all you hear is a slight “click click” noise, and then you see the truck just rocket forward. I ran the slipper rather loose to prevent wheelies, but I think it could have lifted the front wheels when it shifted into second gear. I tried different adjustments to the transmission shift points, but the truck seemed to accelerate the best when the shift came at the 20- to 25-foot mark. Run times doing full-blast, wide-open runs were over 10 minutes. After each pack, the motor and speed were only moderately warm. In the dirt, the Jato handled just as well—if not better—than the nitro version. It jumped awesome and cornered with authority, and as I got more comfortable wheeling it around, it seemed to outperform a stock Jato in every category. Best of all, my homespun creation has thus far proven to be plenty durable. Even though the Jato was responsive to throttle input in the air, I did case a few jumps. Nothing broke, and even after the hardest of hits, the truck soldiered on.