Movie cars have become a lost artifact of pop culture. While movies of today focus solely on the actors and CGI, in years past, it was the vehicles themselves would have made a massive impact on a movie and in many cases, even ends up being the star of the film.

The right vehicle could immortalize a movie while a bad one could break a film. For example, a monstrosity of a truck was made for a film called The Adventures of Buckaroo Banzai Across the 8th Dimension. It was a great movie, but the vehicle looked so bad it never stood a chance. When a movie vehicle is done correctly, you end up with classic hits such as Christine, Batman, Ghostbusters, Jurassic Park and for me, the most iconic movie car ever made, the one, the only, DeLorean Time Machine from Back to The Future.
By Jeremy Griffith 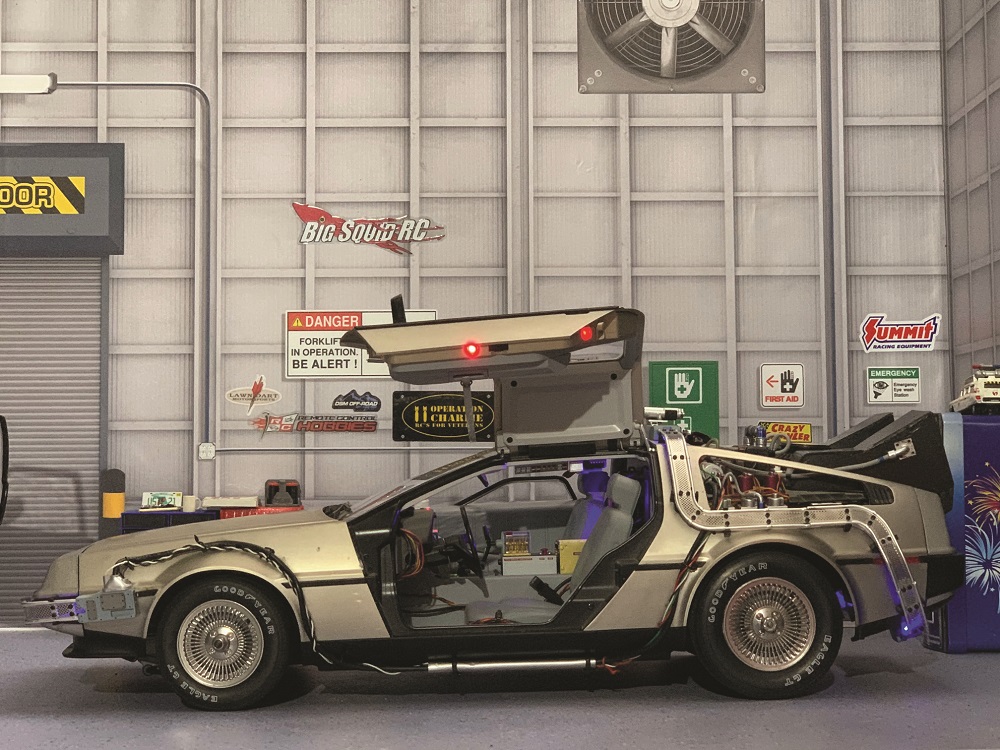 BTTF
Growing up, I was mesmerized by Doc Brown’s Time Machine, a.k.a, the DeLorean. It looked like a spaceship and had more wires and buttons than one car should ever have. The sound of the engine and flux capacitor powering up is enough to give you goose bumps. So about three years ago when I discovered that collectable company, Eaglemoss, had a 1:8 subscription kit for the Time Machine, I knew I had to have it.
Eaglemoss works on a subscription basis, so parts trickle in over the span of three years to complete the model kit. When I received the first few issues of the subscription, I was taken back by the level of detail in just the handful of parts that I had received. I am not the most patient person so doing the build little by little would have drove me crazy. So for three years, I stored every package for the build. Let me tell you, receiving packages for that long adds up to a lot of boxes, plus I didn’t exactly have a good filing system for them either. 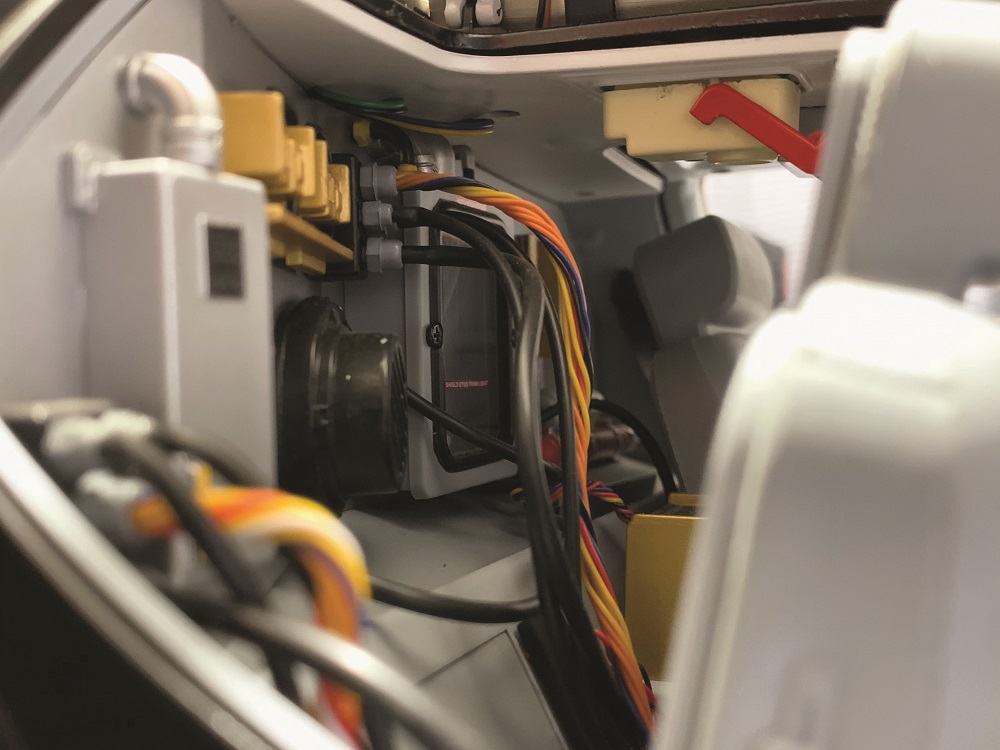 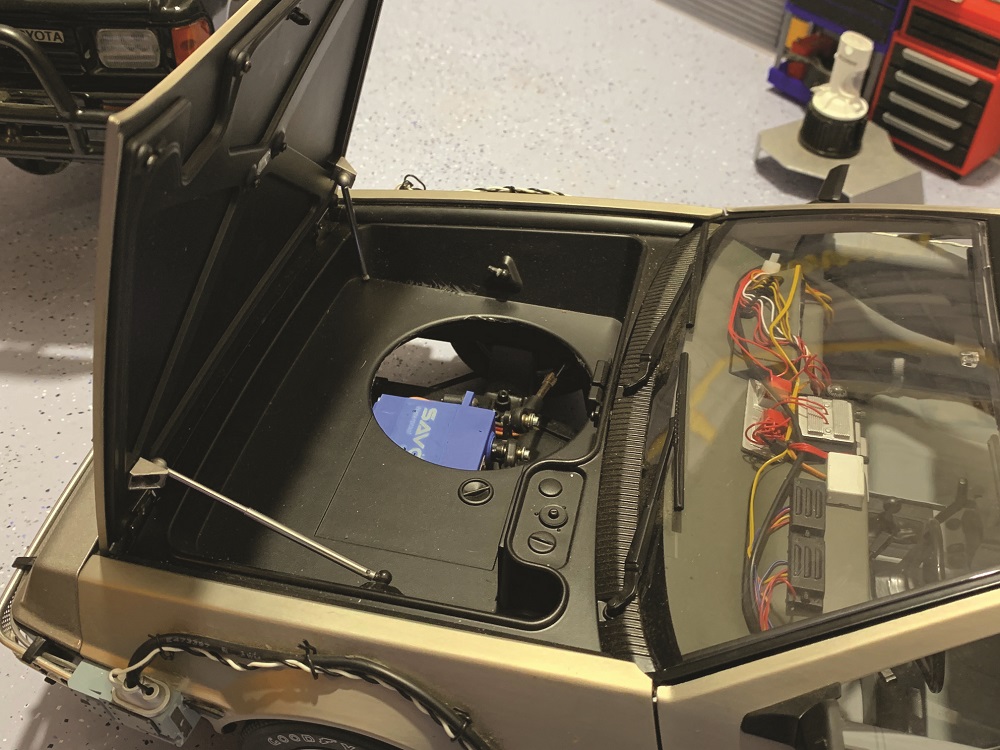 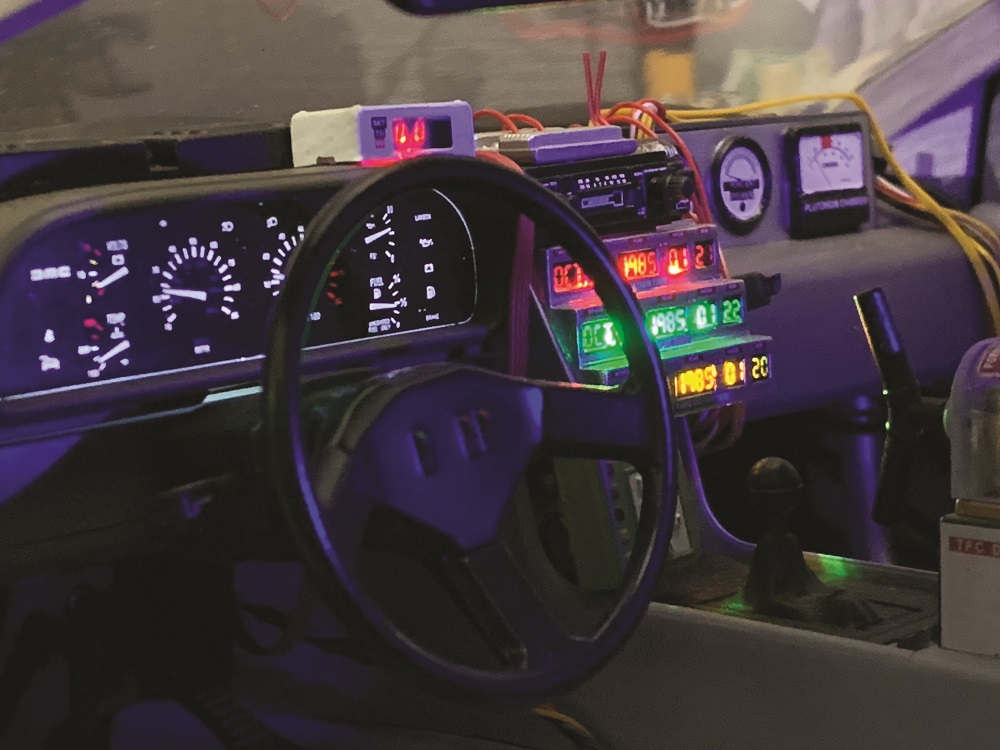 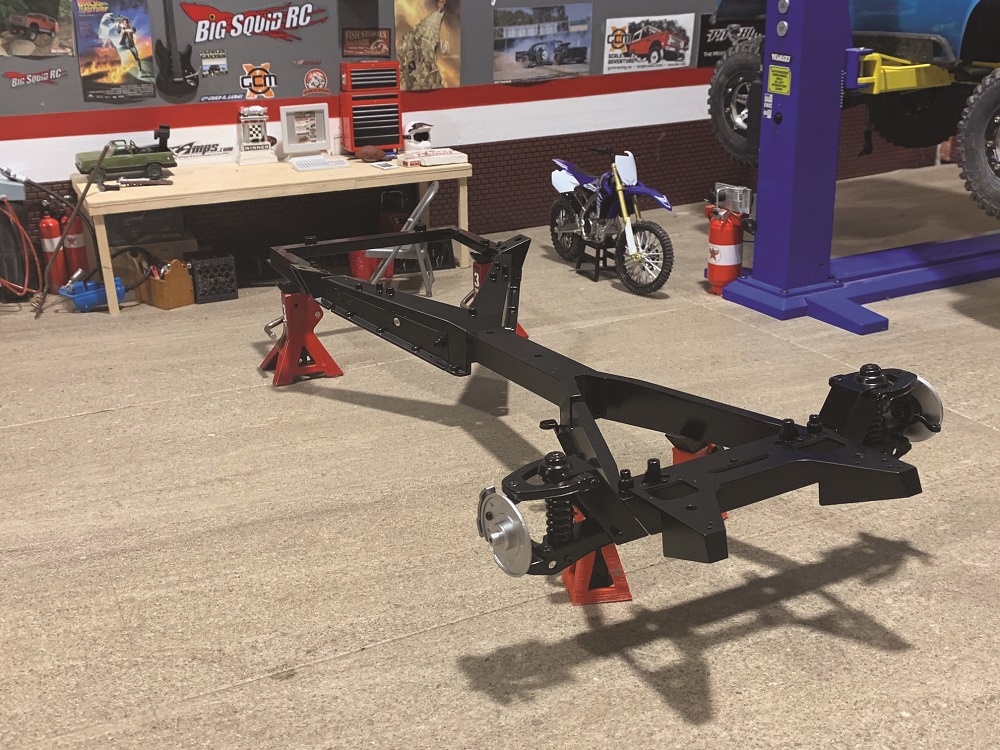 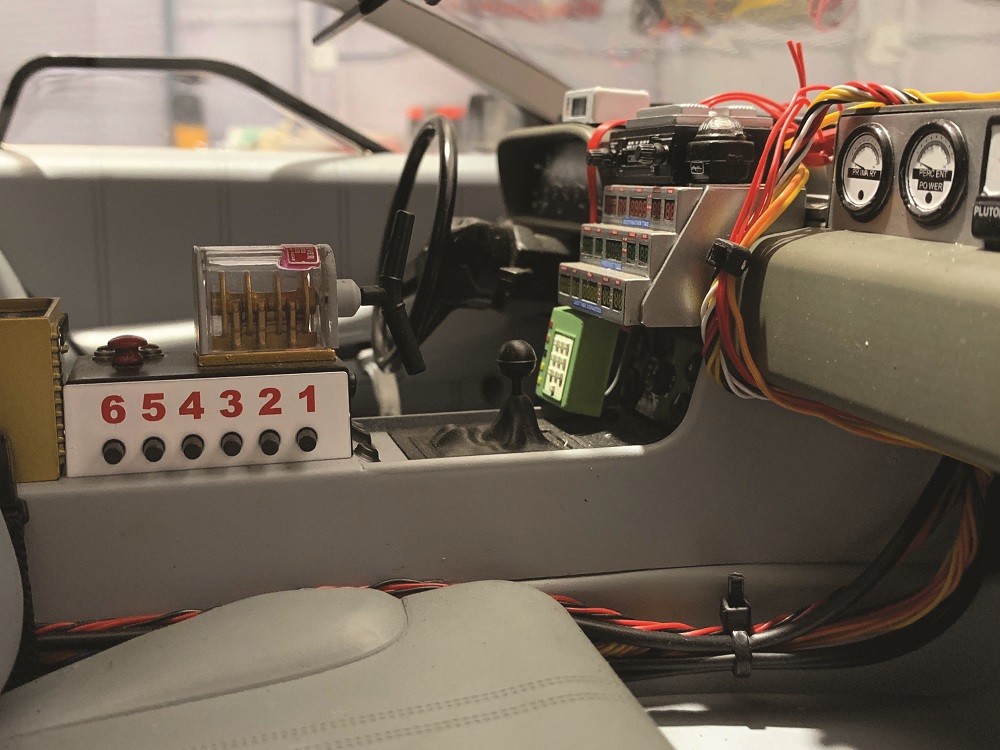 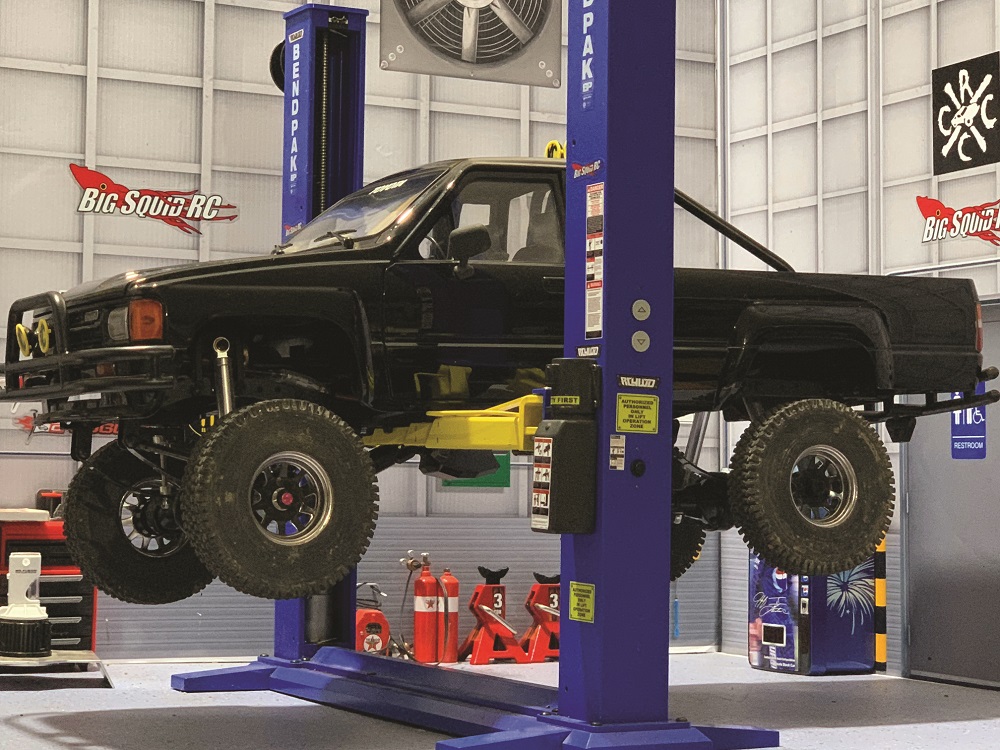 As The Ultimate Scale Truck Expo 2021 (USTE) was approaching, Greg Holman, who is not only a great friend, but also an amazing builder and fabricator and I started going over our build ideas for the upcoming event. I was sure I had enough parts for the DeLorean to get started and RC4WD had just released the 1987 Toyota Xtra cab for the Trailfinder 2 LWB chassis. It was decided that we’d go back to the future so to speak. We would team up and work on both the DeLorean and the Toyota pick up for the event.

Greg was tasked with converting the static display Eaglemoss DeLorean into a full-fledged RC car, while I worked on his McFly truck’s interior. Although I knew what needed to be done to the DeLorean to make it RC, I also knew that Greg could do
it better.

Once Greg was finished converting the DeLorean by making it steerable and drivable, it was time for me to start building my dream car. Every package I opened was jaw dropping with its accuracy in the details. Running out of time, I cannonballed the build in about a week. To power myself though the build, I would play the Back to The Future Trilogy start to finish every night while building the DeLorean along with video chatting friends. Sleeping three hours a day and working all night will start to do things to a person. I knew when the little wires started to look like one big one; it was time to call it a night. 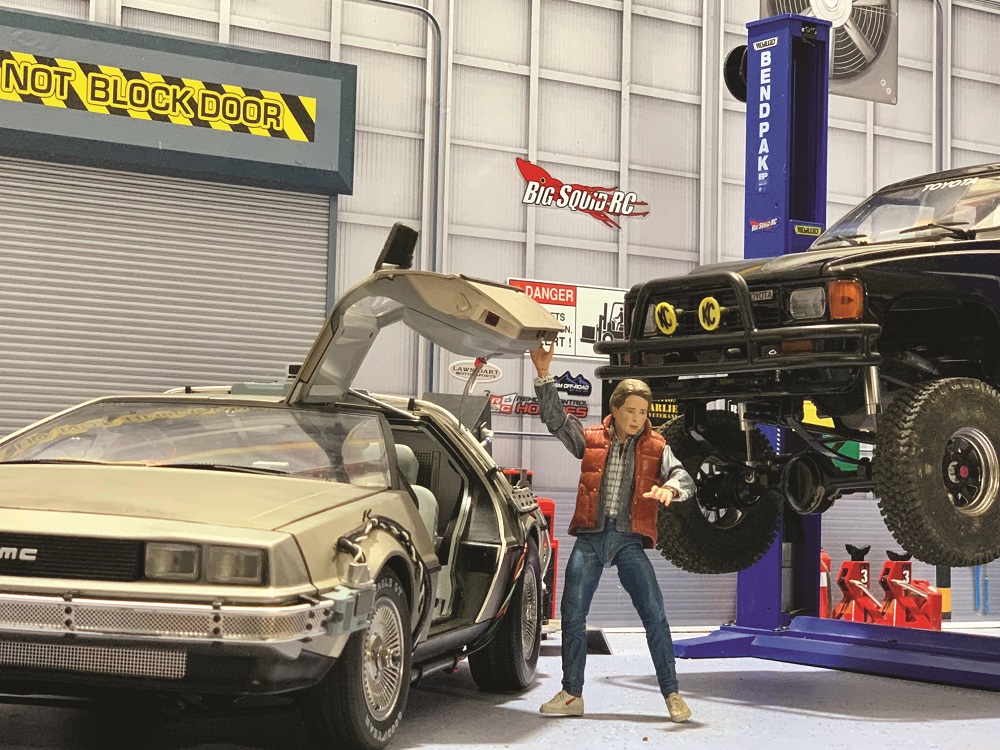 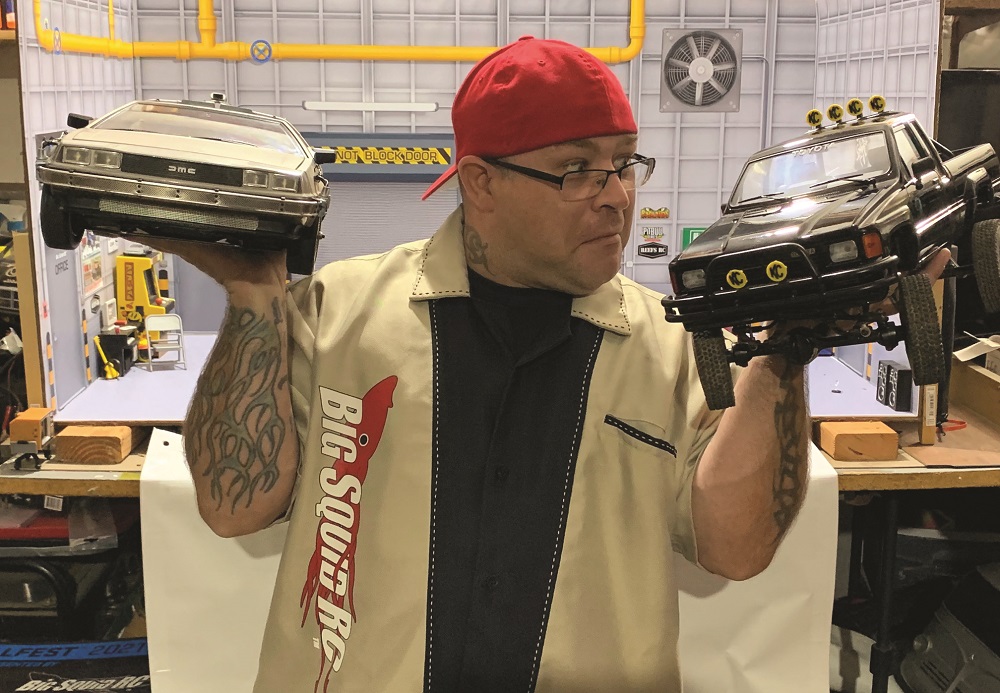 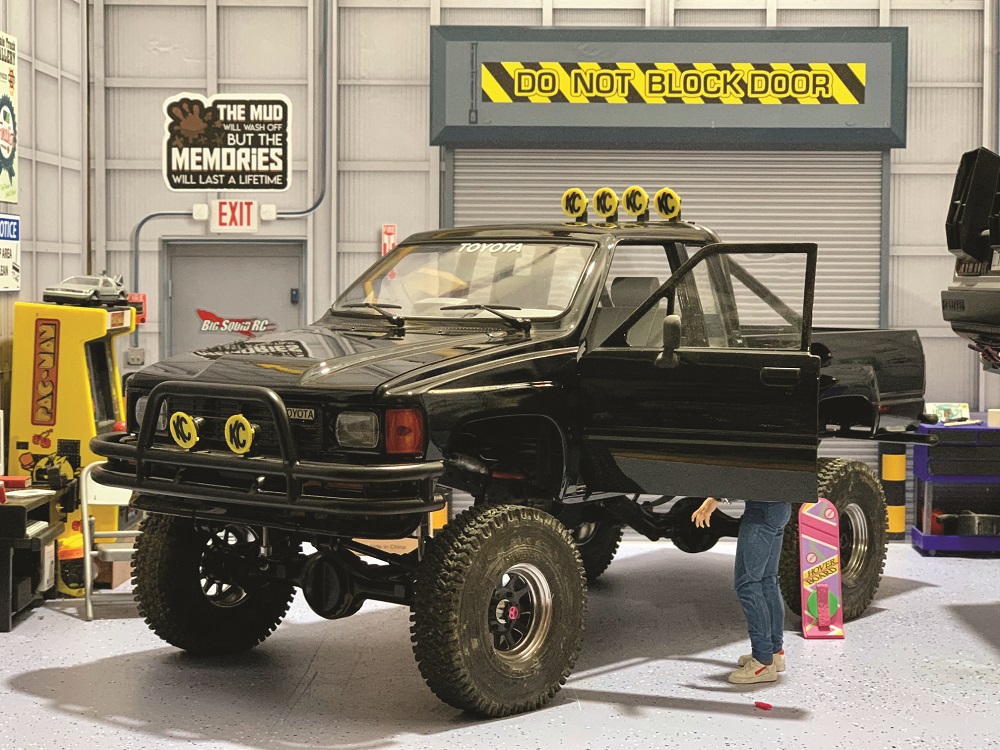 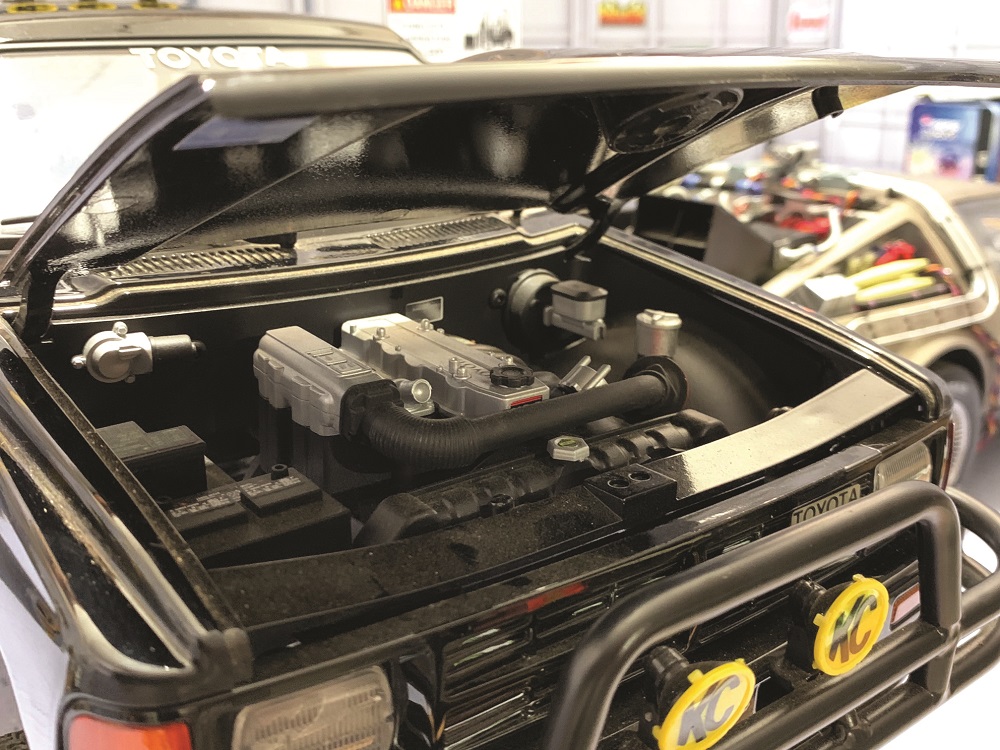 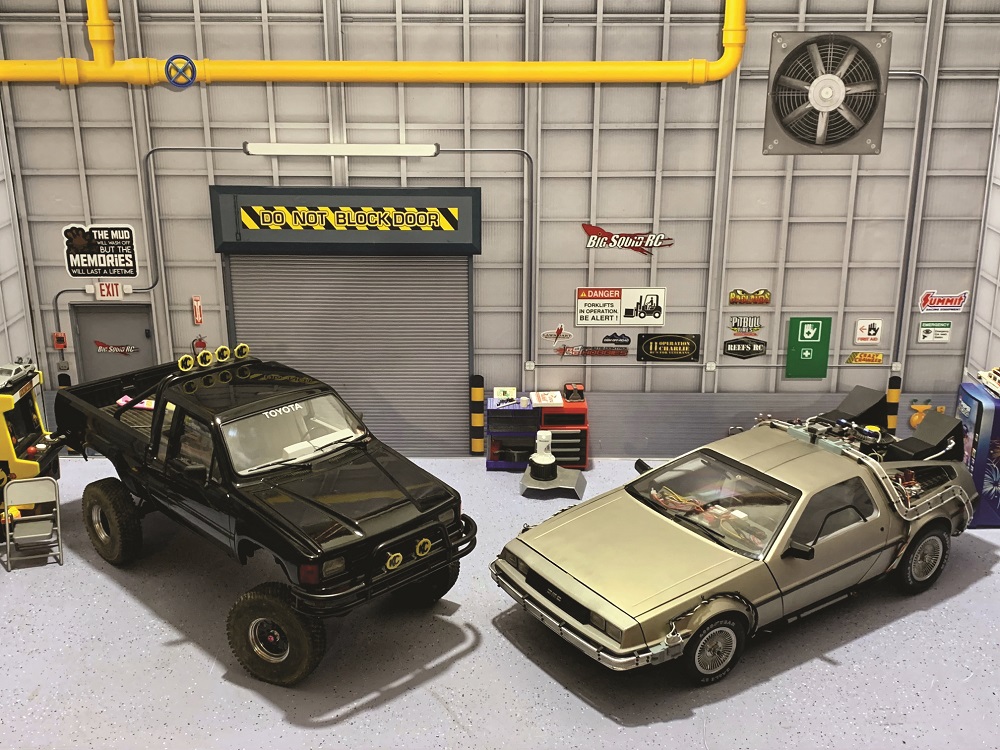 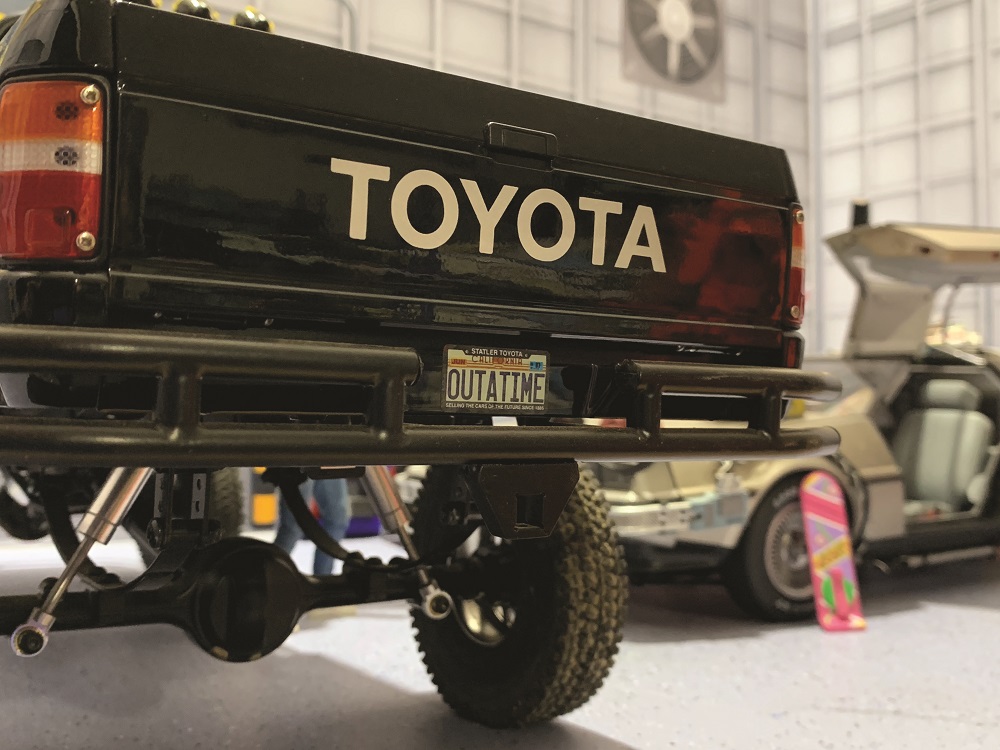 A week before USTE 2021, I realized I still had a few more issues of the Eaglemoss kit to go and the remaining parts wouldn’t make it in time to have the DeLorean finished for the GCM Racing Gallery at the event. The GCM Racing Gallery at USTE is one of the toughest scale Show and Shines in the country, if not the world. Master Builders from all over the globe come to The Ultimate Scale Truck Expo to compete in the Show and Shine. The smallest detail remembered or forgotten can be the deciding factor in getting a GCM Gallery Award. With no other option and some help from Greg, it was time to custom make the few remaining parts I needed to complete the build. The DeLorean’s rear vent hoods are made from styrene and the side wires are old cell phone chargers that go into an Axial Racing light bucket from an old parts tree. Kit bashing at 3am is the way I roll.

The DeLorean ended up winning Best Interior and Greg’s McFly truck was a runner up for best engine bay. Seeing all the hard work paid off and winning a Gallery Award was emotional and historical as the DeLorean was the first car to ever win a USTE award. What is cool is the way people look at the car. It brings people back to the time when they first saw the movie and people recalled how it made them feel. As great as it is, for some reason I still felt like something was missing.

Fast-forward to just a few months ago, I saw that RC4WD released an RTR Back to The Trails Trailfinder 2 LWB. That’s when it hit me. What was missing was my very own McFly truck to match the DeLorean with. Even though I worked on Greg’s McFly truck, it was still his and I needed my own. Working for Big Squid RC keeps me very busy with projects and building another McFly truck wouldn’t have been able to happen for some time. I just had to snag the RTR version.

Opening the box when it arrived at the shop gave me a different feeling than most. My experience was as if you could hear Huey Lewis and the News playing in the far distance. The RC4WD 87 Back to The Trails truck is beautiful and like the DeLorean, it is packed full of scale details. Seeing details such as stickers on the inside of the hood, a scale engine bay and an armrest being able to be moved up and down in an RTR is impressive. It keeps me excited for what the future holds in the scale RC world. The RC4WD Back to The Trail Trailfinder 2 LWB has earned its spot in the scale shop, right next to the DeLorean!