In this decade or the next, there’s a good chance that humankind will return to the moon and may even visit the red planet, Mars. We hope that when these brave explorers set out on their mission, that they bring with themselves a Traxxas X-Maxx along for the ride. If they knew what we learned from our recent outing with the X-Maxx, we’re certain that they’d agree.

Why would an extraplanetary expedition require an RC monster truck like the X-Maxx you may ask? The answer is terraforming. What we experienced during our time with the X-Maxx amounted to nothing less than a practical exercise in planet-scale terraforming.

The X-Maxx moves earth like nobody’s business and this gigantic torquey truck easily dug through any terrain that we ran it on. When we drove it too close to ourselves, much of that newly dug up terrain ended up in our faces and stuck in our hair. So yes, if you want to start a new colony on a planet somewhere, we nominate the X-Maxx as the only tool they need to break extraterrestrial ground with. 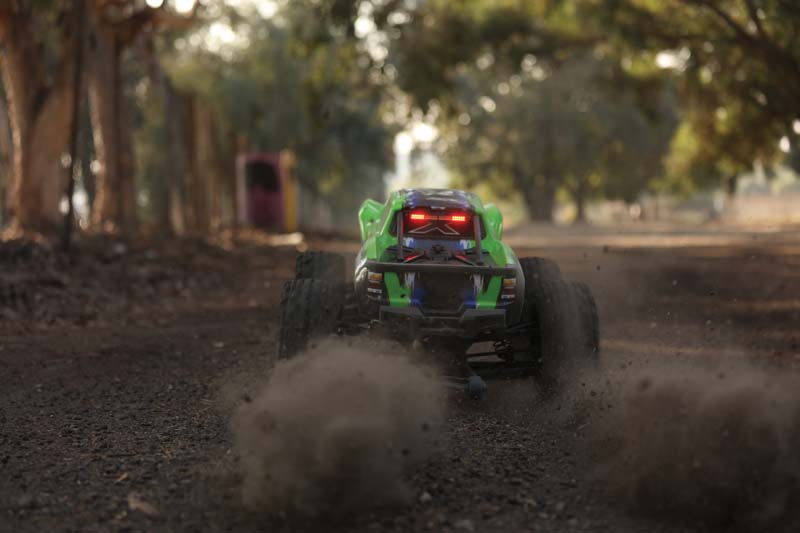 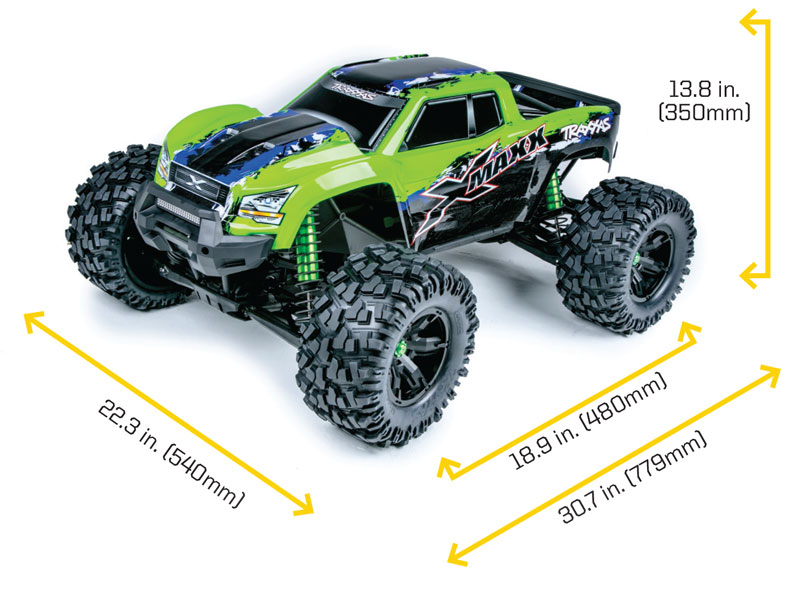 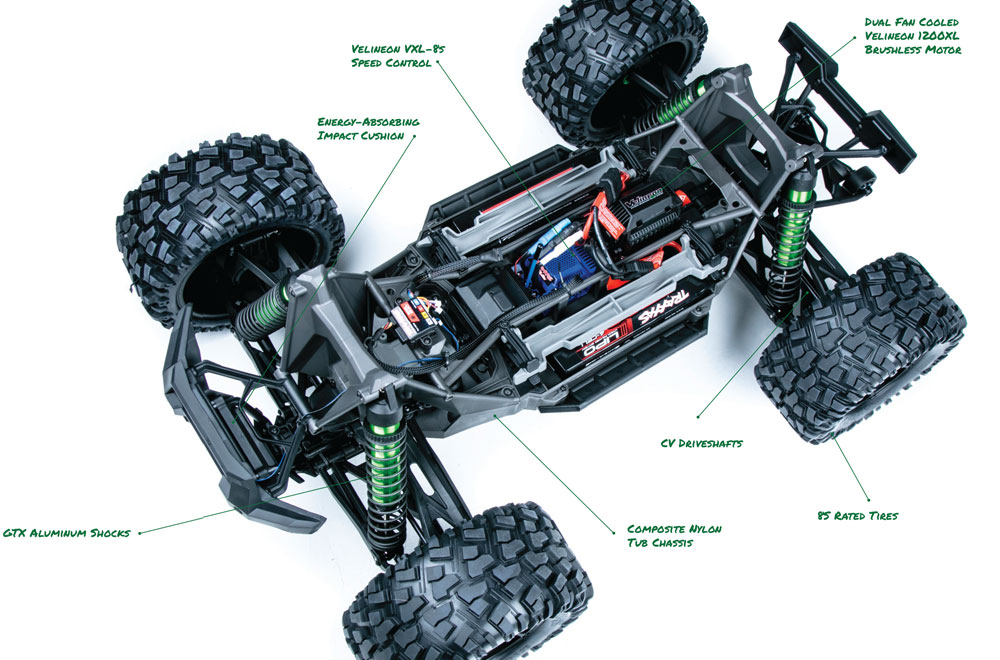 All kidding aside, we really did move a good amount of dirt, rocks, sand, soil, grass and even chunks of asphalt when bashing around the behemoth known as X-Maxx. The thing truly puts the monster into the term monster truck. It’s seriously humongous, measuring over two-and-a-half feet long and weighing almost twenty pounds. In comparison, it makes the already monster-big Traxxas Maxx look cute and cuddly.

The X-Maxx boasts mega amounts of power too, in terms of motor power, electronic speed control power capacity and straight up electrical power. The truck packs 8S power, which is done by combining two separate 4S battery packs. Its Velineon VXL-8s speed controller is wired so that both batteries can be plugged into it at the same time.

In our case, we fed the beast off of two Traxxas Power Cell LiPo 4-Cell 6700mAh batteries. The dual-battery set-up provides 30-volts in 8S configuration. All this power flows to an all-dominant Velineon 1200XL brushless motor that is equipped with dual cooling fans. The motor is a thing of both beauty and chaos. It’s a beauty because it launches the twenty-pound X-Maxx onto its hind wheels at will. For the same reason, it can cause utter chaos too. 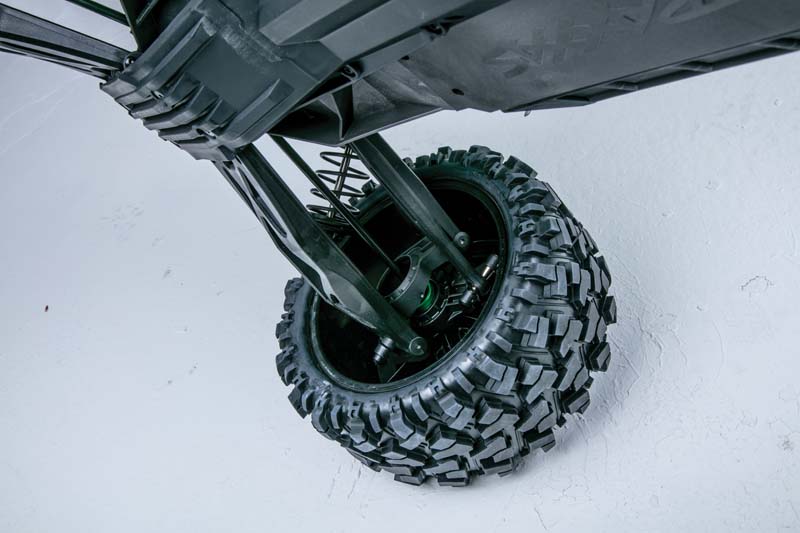 What’s surprising about driving the X-Maxx is that even with incredible amounts of power coursing through its four giant tires, it is remarkably manageable to drive. You’d think 8S power would be borderline chaotic to control, and you’re right, in a way it is, but Traxxas has also made it very controllable too. It’s as if the X-Maxx was the fiercest untamed bronco in the corral that throws off any rider that tries to mount it, but turns around and obediently obeys your commands. It’s an incredible feat really.
Guiding the X-Maxx at speed over asphalt, very fine sand and through wild grass felt exhilarating yet still predictable. That isn’t to say you needn’t respect it however. Even the mildest mannered horse can throw you off its back if you don’t treat it right. If you choose to drive it civilly, it will comply. But the instant you slam the trigger back and go full throttle, get out of the way! The beast will come alive, untamed and shred anything in its path.

We’d like to take this time to thank Traxxas for including its integrated wheelie bar. If it didn’t have one, the X-Maxx would probably end up on its roof a lot. (Which wouldn’t be much of a problem since the truck comes with Traxxas Self-Righting technology that flips itself over when it lands upside-down.) Most of us can agree however, that we’d rather spend most of our time driving it on its wheels (and wheelie bar) and not its roof. The truck really likes to launch hard and fast and spend a great deal of the time on its hind wheels. It’s truly glorious to experience. 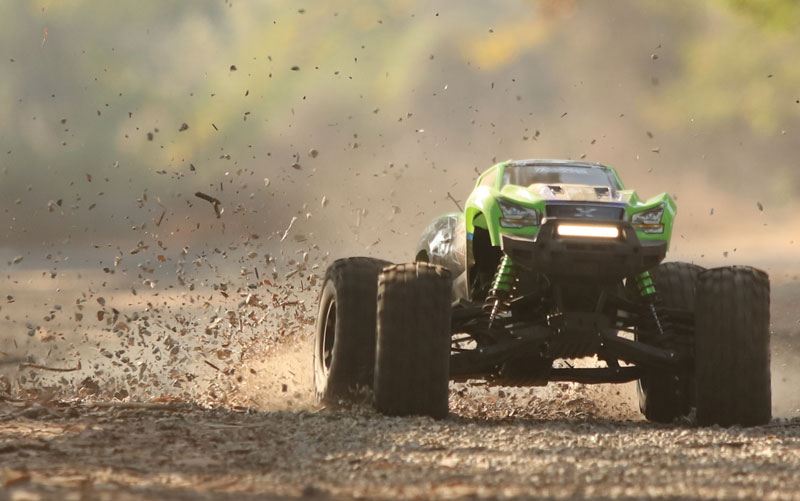 Much of the truck’s controllability can be attributed to its built-in Traxxas Stability Management (TSM) technology. Think of TSM as electronic driver’s aids that you would find in real life cars such as traction control or even a sports car’s launch control. TSM makes the X-Maxx much easier to control on slippery surfaces such as loose dirt, smooth concrete, and even ice and snow.

With TSM on, launching off the line won’t create an instant donut. Instead, TSM senses the vehicle’s direction and makes steering corrections to provide straight full-throttle acceleration without unexpected fishtailing or spinouts. When cornering, TSM intuitively corrects the vehicle’s line for faster exit speeds. The technology applies to breaking too, keeping the vehicle straight until it reaches a complete stop. TSM can be fine-tuned or deactivated by adjusting the multi-function knob on the TQi transmitter or in the Traxxas link app.

Other reasons why the X-Maxx may handle as well as it does are probably thanks to its pliable 8-inch tall tires, long-arm suspension and enormous oil-filled aluminum socks. The truck just soaks up any terrain you throw at it. In fact, we inadvertently careened right into a street curb at great speed and instead of a head-on collision like we thought would happen, the X-Maxx’s tires, long-arms and shocks sprung into action and swallowed up the hit and gracefully slid X-Maxx over the curb like it was nothing. We couldn’t believe how smoothly the truck climbed over the curb and at speed too. Count us as impressed.
We took a few passes at natural occurring ramps that we used for jumps and as you can imagine that the sight of such a big vehicle launching high into the air put on more than a few broad smiles. Again, thanks to its well-endowed suspension, X-Maxx landed, even on uneven rugged terrain, like it was no big deal. Another thing that is surprising about a monster truck this large running as big of a tire that it does, is that it’s remarkably nimble and has a tight turning radius. It demonstrated to us that it can both be a surgeon’s scalpel and a blacksmith’s hammer. 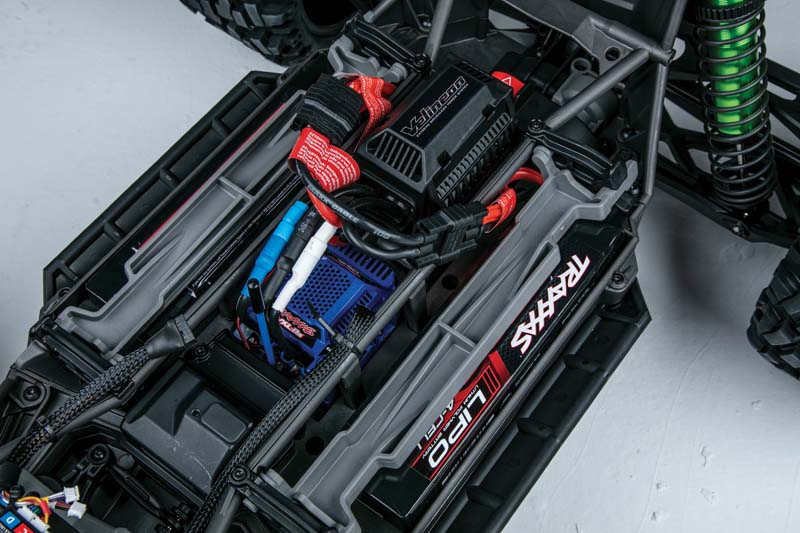 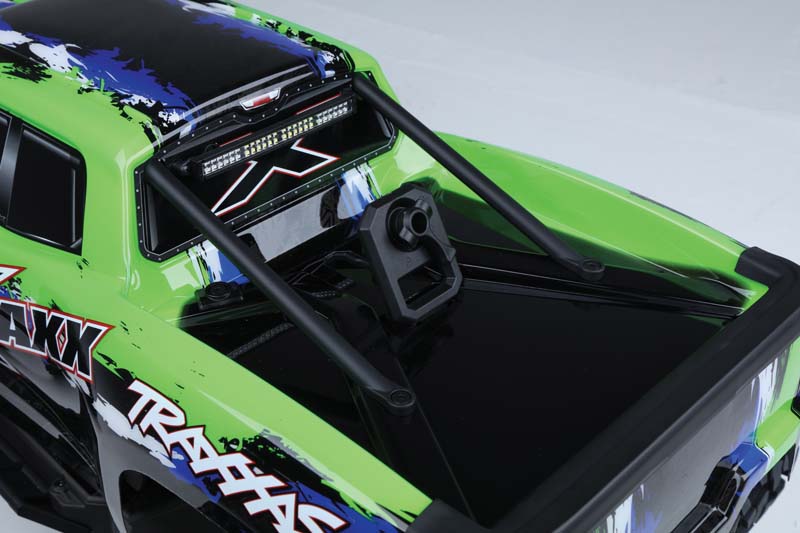 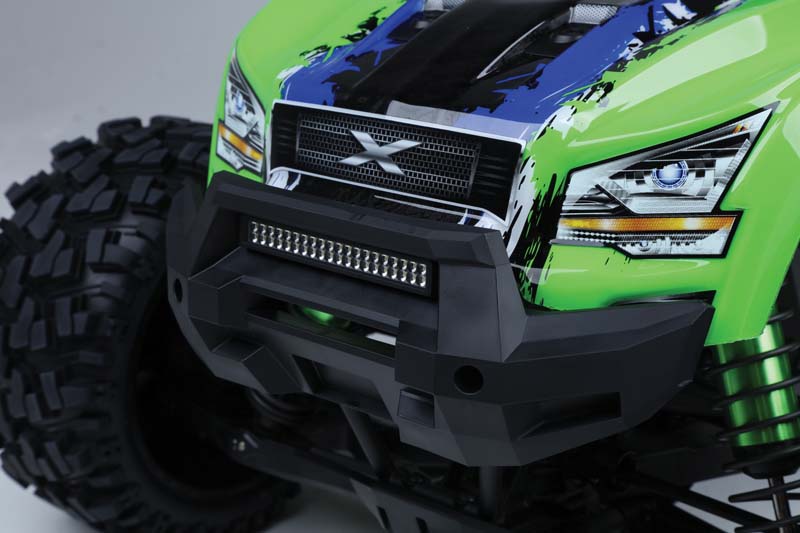 Under the skin of the X-Maxx lays engineering meant for not only powerful performance, but longevity and protection too. A composite nylon tub shaped chassis shields critical components such as the transmission and electronics from damage. The transmission itself is also designed to shrug off hard conditions and deliver everything you demand it to. It is fitted with what Traxxas calls a shock-absorbing Cush Drive.

Traxxas engineers found that conventional slipper clutches couldn’t handle the massive torque loads of the 8S power system so they outfitted the X-Maxx with their Cush Drive, which was originally created for their 100 mile-per-hour capable XO-1 Supercar. What resulted is a transmission that can send great loads of power directly to its Torque-Biasing Center Drive.

The Torque-Biasing Center Drive is made to absorb shocks that may shock the driveline. It also distributes power to all four wheels seamlessly via robust sealed differentials. We could go on and on about the incredible engineering work that Traxxas poured into the X-Maxx, suffice it to say, this thing is a beast. 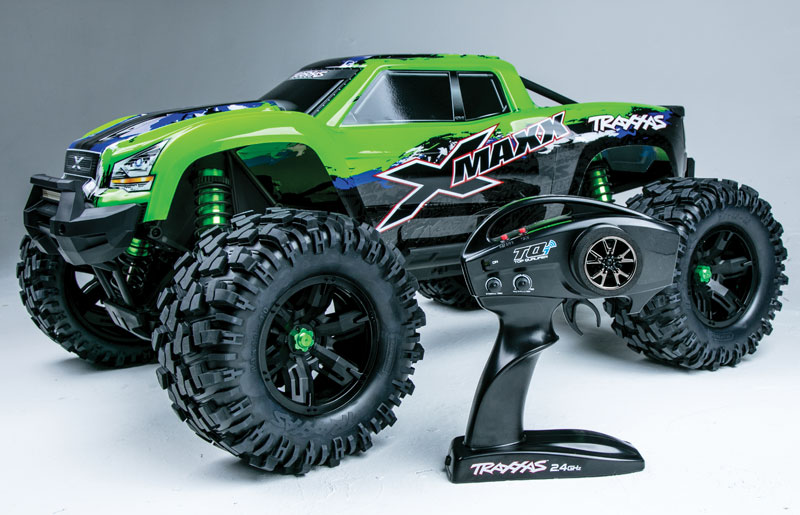 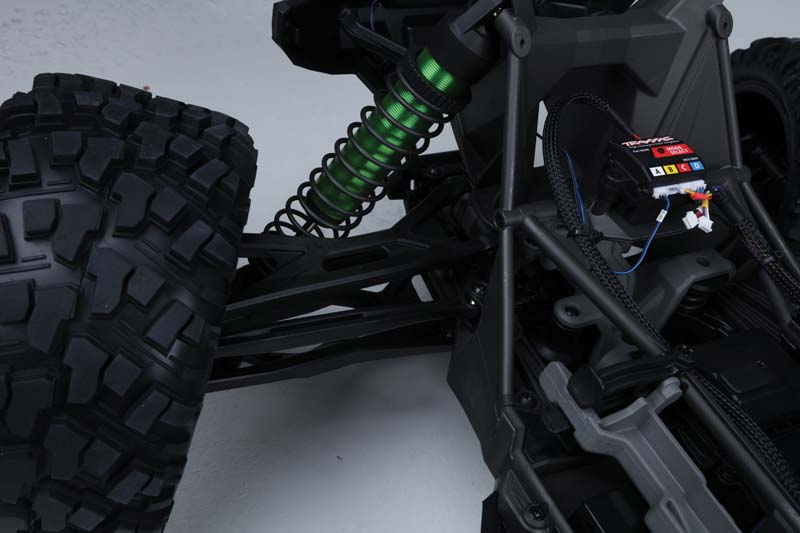 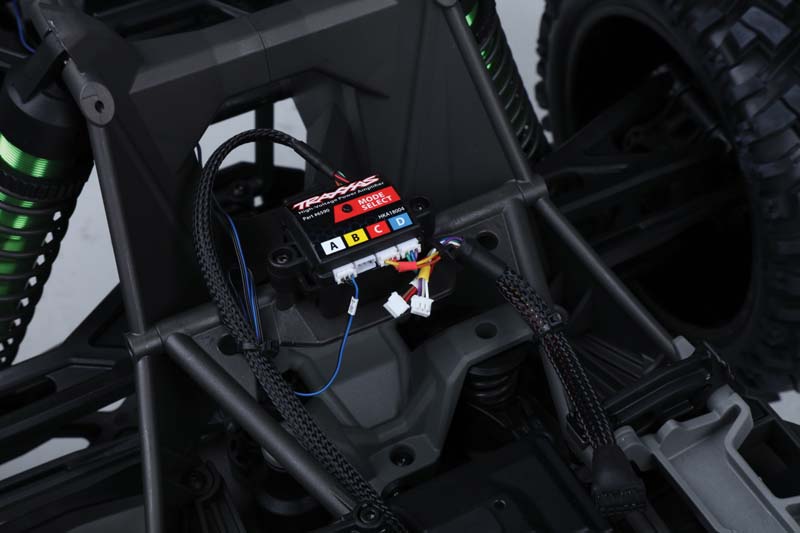 Wiring for the optional LED light kit is routed through this power amplifier.

LET THERE BE LIGHT

Because lights make everything better, we opted to install an optional Traxxas LED light kit to the X-Maxx. Built to handle any entanglements that the X-Maxx would run into, the factory Traxxas light kit is the only one we trust to install. Installation was straightforward and only took us about half-an-hour to complete. The kit is waterproof and has a truly factory look and feel. No surprises were encountered during the installation process.

The kit produces an intense-white light up front thanks to a high-output LED light bar installed into the bumper. The front light is capable of both high and low beams. In the rear, you’ll find bright red brake lights that work when brakes are applied in both forward and reverse directions. Reversing will turn on white reverse lights; going forward will automatically turn them off.

The rear light is attached to the rear window of the body and does require the reaming of a few holes for mounting. Other than that, the electronics and wiring are easy to do thanks to Traxxas’ clear instructions and simple bolt-on installation. If you equip your TQi transmitter with a Traxxas Link Bluetooth module, you can turn the lights on and off with the Traxxas Link App or even further customize its lighting modes to your specifications. We have to admit that we really dig the light kit. 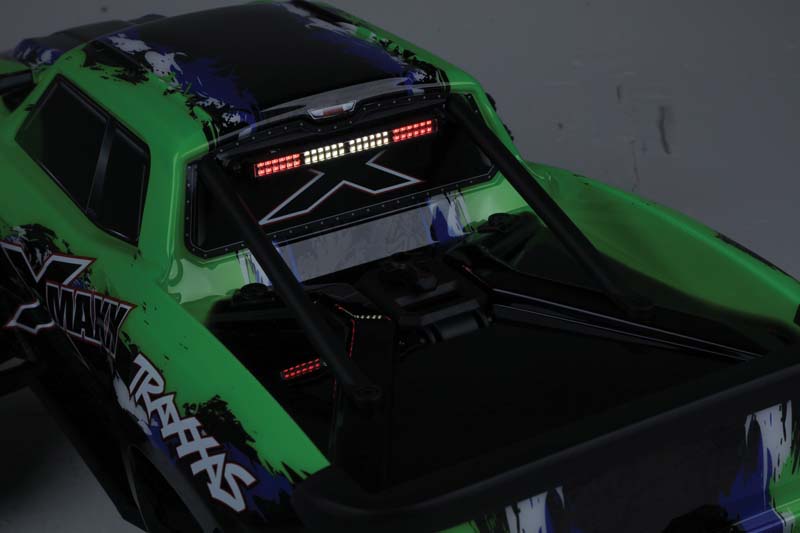 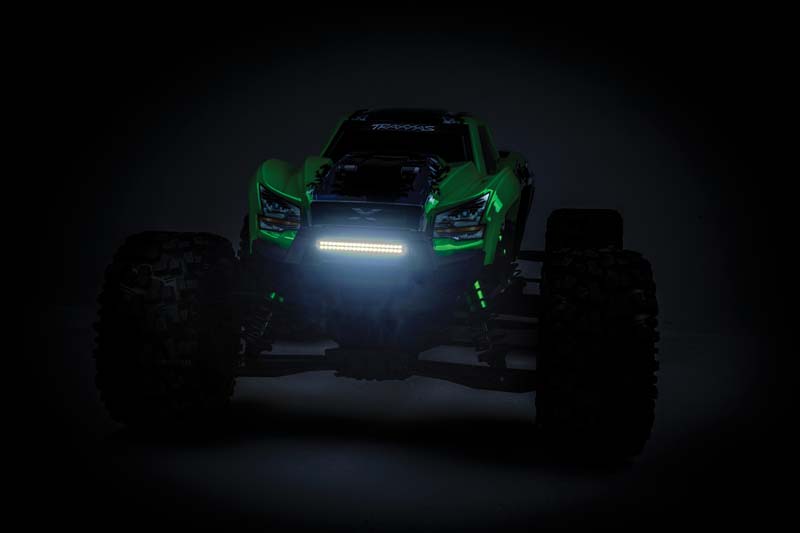 The kit produces an intense white light up front thanks to a high-output LED light bar.

The X-Maxx was released about five years ago so it can’t claim to be the new kid on the block. What it has every right to claim however is that it’s one of the biggest, baddest, most powerful, most durable, most ingeniously engineered kids on the block. If that’s not what you want in a monster truck, we think you may not really want a monster truck after all.
The X-Maxx has been made available in a hot new collection of colors including the green that you see here, what’s not to like? If you’re contemplating on getting one, be prepared to be the most popular person on your block. After all, your neighbors may think you’ve joined the space program and that you’re training to terraform the moon or even Mars. 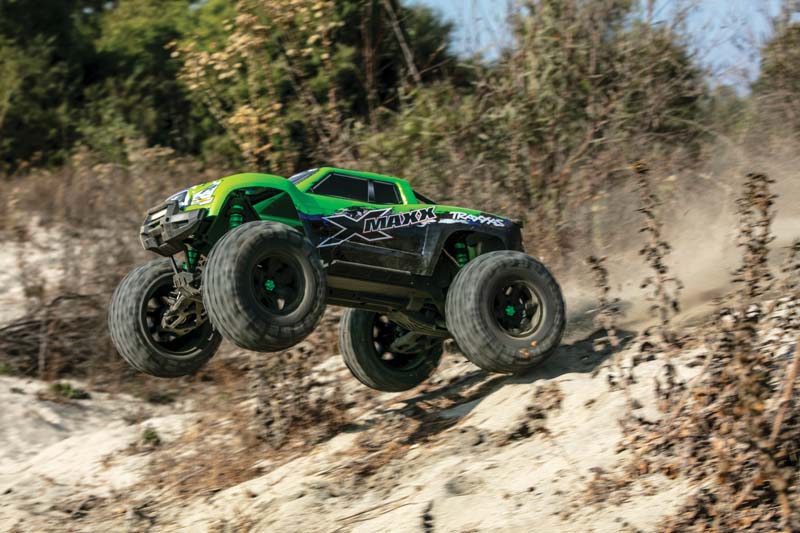