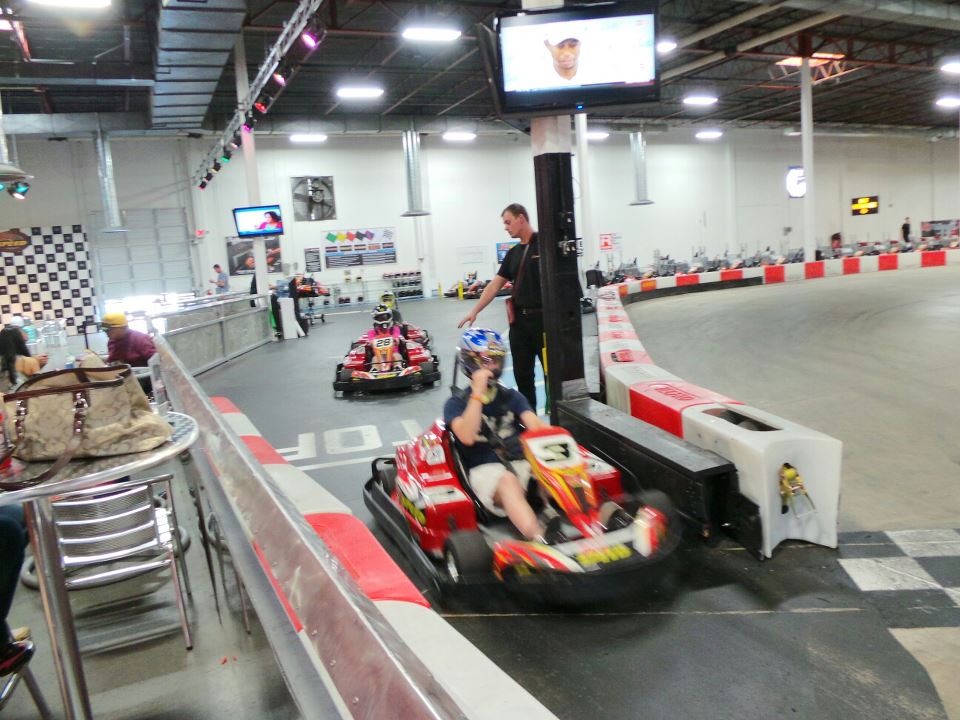 Last weekend I did the unthinkable: I took a mini vacation.

Friday afternoon I picked up a gas-sipping rental car, loaded my bag, picked up my girlfriend and her 12 bags that I’m convinced contained every last item of her personal belongings, and set off for the sunny desert of Arizona to catch the last weekend of Major League Baseball’s spring training (more on that in a future blog). Since I had just visited twice in the three weeks prior for the Nitro Challenge and Cactus Classic, I know Interstate 8 well enough to practically make the trek from San Diego to Phoenix in my sleep.

We spent the first two nights of our trip with some very long-time RC friends of mine, Sean and Dawn Sanchez, who not only spoiled us with two spectacular breakfasts but came up with the best idea ever for Saturday afternoon – go-kart racing! We had all been to similar tracks before and couldn’t think of a better way to burn off that morning’s pancakes; at one time, Sean had been a regular at the local Phoenix-area K1 Speed, and with Saturday’s Padres game against the Rockies not starting until the evening we had a few hours to kill. Of course, the friendly smack talk started not long after signing up for our three-race packages and by the time we strapped on our helmets and climbed into the electric-powered karts our “fun afternoon idea” turned into a cutthroat mini-Grand Prix full of sore forearms, bumping, yelling, laughing, excuses, and more smack-talking. You simply can’t put gearheads and competitive people behind the controls of any closely-matched vehicles without the situation getting out of hand, and I absolutely hate to lose. 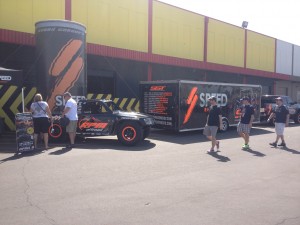 Outside the warehouse, Speed Energy had a booth set up to promote the opening round of the inaugural Stadium Super Trucks series, which will be held at University of Phoenix stadium on April 6!

Anyone who has ever visited a K1 Speed facility, or a similar karting track, knows that there are a few factors in winning a grudge match against friends: being lucky enough to get assigned one of the faster karts, managing the on-track traffic in order to get in at least a few clean laps, and taking a proper racing line that allows you to keep your right foot mashed to the floor as much as possible. Here’s a tip: Screaming out of your helmet to get slower traffic to move out of the way when they don’t heed to the blue flag, combined with a very liberal application of the front bumper, can be surprisingly effective. 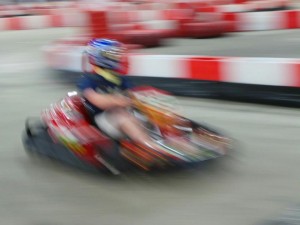 Look how fast I was going!

Of the three races we ran that day, I had the fastest time in two of them including our group’s best of the day. In the third race, however, I got stuck behind slower drivers for most of the race and Sean nipped my fastest lap by mere hundredths of a second…and that made for a long 15-minute drive back to the house. Of course, that was the results sheet that was photographed and tagged on Facebook for everyone to see. Ugh.

Just like visiting the local indoor kart track, RC racing gives us a safe and accessible environment in which we can settle friendly rivalries. What’s the silliest contest in which you and some of your like-minded buddies got overly competitive?