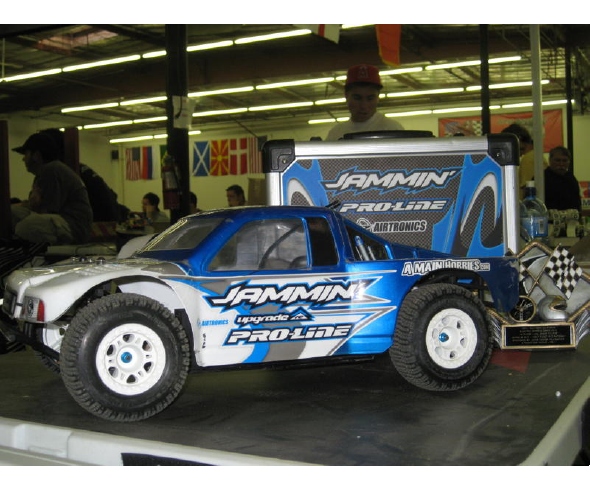 The JBRL Electric Series is in its 7th season and Pro-Line driver Chad Bradley is off to a great start winning the Unlimited Short Course class!

Chad says, “The Bow-Tie was very stable, had more predictable handling and more corner speed. The tires felt the best when the track had a little moisture in the dirt (they would mist the track a couple times a round, they had 30 heats at the race), for the main the track was much drier and it took a couple minutes of running before the tires felt to of come in (steering mainly).”

“Kortz was there using AKA’s on his SC truck, that tread looked to of been more aggressive than a Bow-Tie, however the compound he was using (super soft) looked like it changed the handling of his truck during his runs (he would start off real fast then start traction rolling and hooking in the corners later in his runs).”

“Here’s a video of the main, you can see that Kortz’s truck started off with more steering than mine, and later in the run my truck became faster, it felt like the steering and traction came in about half way in the main.”

Great work out there Chad!