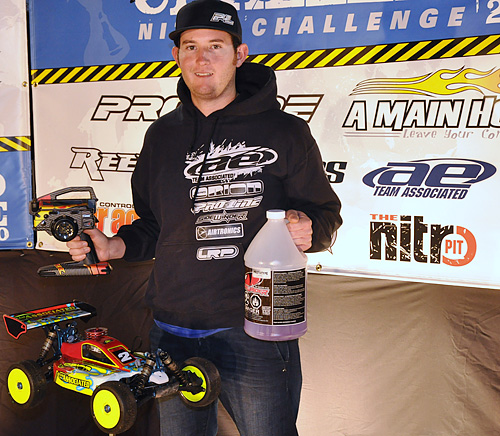 The 11th Annual “Dirt” Nitro Challenge hosted by the Nitro Pit raceway in Wittmann, AZ represents the most difficult conditions for an R/C car to survive and tests not only the durability of the vehicle, but the wherewithal of the best drivers in the World. Adding another dimension to the event was Mother Nature, who sent the temperatures from a perfect 80 degrees to a wet and soggy 50 within one day.

As conditions continued to change throughout the event, Ryan Cavalieri proved to be the most consistent driver with top three finishes in all three qualifying rounds. However, without a Top Qualifying run, Cavalieri found himself starting second on the grid. Joining Cavalieri in the A Main for Team Associated were Reedy teammates Ryan Maifield and Richard Saxton.

At the start of the main event, Cavalieri made quick work of Top Qualifier Jared Tebo and set a blistering pace, finding himself with a 30+ second lead over second place, 30 minutes in to the 45-minute main. Smooth driving from Cavalieri easily brought home the third consecutive victory for the Team Associated RC8B at the Nitro Challenge and proves the RC8B’s durability, consistency and drivability on even the toughest tracks.

Carrying over the momentum he built at the Nitrocross at this same track in November of 2009, Ryan Cavalieri took his Team Associated RC8T CE truggy to the top spot on the grid for the 45-minute main event. Joining him the “hard way” was teammate Ryan Maifield who had to bump from the B Main and started 13th on the grid.

A quick start from Cavalieri saw him build a lead as teammate Maifield worked his way through the pack. By the 30-minute mark Cavalieri was out to a lead ahead of Reedy electric driver Ty Tessmann and Maifield. Hard-charging from Tessmann and troubles with lapped drivers saw Cavalieri’s lead shrink and the 2x World Champion eventually found himself behind Tessmann with only a few minutes to go. Uncharacteristic mistakes from Cavalieri and steady driving from Tessmann got the young Canadian his first major victory on US soil. Rounding out the podium were the RC8Ts of Ryan Cavalieri and Ryan Maifield.

The theme in Pro2 was SC10! In both the Stock and Modified divisions, Team Associated SC10s took the top qualifying spot and victories. Taking the sweep in the Stock category was Bill Koch, and in the Modified class Chris Jarosz took an impressive TQ and win. Both drivers demolished the field with lap times over 3 seconds faster than the next closest driver … proving once again that if you want to compete in Short Course racing, you better be driving an SC10.

Growing in popularity, the 1/8th electric class had two full heats and saw some of the top pros compete in the fledgling class. Travis Amezcua took his new ride powered with the LRP SPX8 system to the top step of the podium. Travis has seen good success in this class with a controversial second place overall at the ROAR Championship in late 2009. Look for LRP drivers across the country to start utilizing the newly released SPX8 Speed Control and Vector8 motor.

Congratulations to all the champions and to the Dirt crew, the Nitro Pit crew and all the volunteers for making the 2010 Nitro Challenge a success even with the torrential downpours.