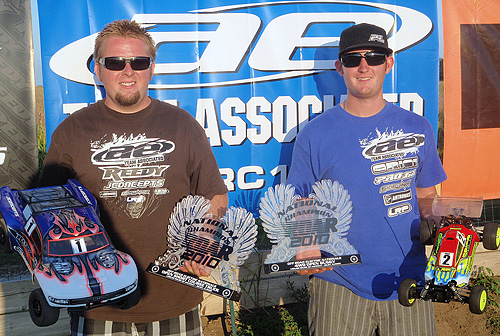 Set amongst the cornfields of Joliet, Illinois, Leisure Hours R/C Raceway hosted the 2010 ROAR 1:10 Electric Offroad National Championships. Not a stranger to hosting large events, the Leisure Hours crew scaled down their massive outdoor dirt track to create an open and challenging layout to crown a National Champion. With a cracked and dusty surface, the track was unlike what most of the top pros race on from week to week.

As all racers struggled to find the correct balance of speed and grip, Team Associated drivers worked together as a team to find optimal setups for their B4.1, T4.1, B44 and SC10s. Constantly changing setups and track conditions put a premium on disciplined and consistent driving along with minor tweaks to tire inserts and shock settings.

In qualifying, the “Ryan & Ryan” show continued to get faster and faster as each round progressed and eventually both of them had TQ runs in multiple classes as the main events approached on Sunday. After a rough Friday of qualifying, Ryan Maifield got down to business with his Factory Team SC10 on Saturday and TQ’d both the third and fourth rounds of qualifying to place his truck in the #1 grid position for the highly contested Short Course Open category.

As the sun rose over the Leisure Hours track, the competition heated up and anyone in the A mains felt like they had a chance to win, given the difficulty of the surface and layout. Coming out of the gate, Ryan Maifield jumped from the pole position in his Reedy/LRP powered SC10 to claim an A1 victory by quite a large margin. In A2 Maifield had a large lead only to suffer a mechanical failure and hand the win to Reedy’s Travis Amezcua. This set up a showdown for A3 between these two drivers with a winner-takes-all prize. Maifield jumped out from his TQ spot as Amezcua worked his way in to second. Patient and calm driving by Maifield allowed the punched Amezcua to get within striking distance on the last lap, but savvy driving by Maifield saw him cross the line first and claim another National Championship for the successful SC10 Short Course Truck.

In the 4WD Open class, Ryan Cavalieri took the win ahead of teammate Maifield in A1 and a poor tire selection for Cavalieri in A2 saw the event come down to the final A3 main. At the start, Maifield quickly jumped out to the lead as Cavalieri and others battled for the remaining positions. Based upon the ROAR rules, the tie breaker is the combined laps and times of the two best results. With a 15-lap run in the books for Cavalieri and only a 14-lap run for Maifield, Maifield knew that he had to run the extra lap just to have a shot at winning the tie breaker with Cavalieri. Alas, the track had become more slick and lap times climbed, assuring Maifield wouldn’t be able to touch Cavalieri’s 15-lap run from A1. So in the end, the Associated teammates tied in points for the victory with Cavalieri winning his second consecutive National Championship for the undefeated Factory Team B44.

Congratulations also go out to Cory Crosley who took his father’s SC10 to the TQ position and National Championship in the 17.5 Short Course class. Additionally, joining Maifield and Cavalieri in the A mains for Team Associated were Ty Tessmann and Steven Hartson in Open Truck and Chad Due in Open SCT.