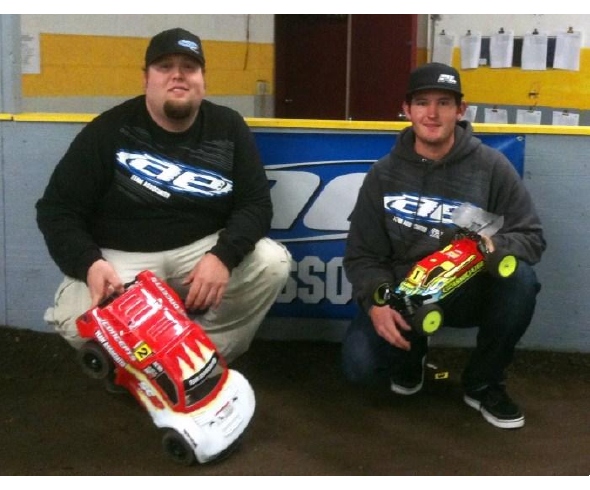 As the 1:10 electric winter racing season kicks off, the Spektrum Off-Road Challenge, hosted by Trackside Hobbies in Brookfield, WI got things underway with over 300 entries for the three day event. Friday’s schedule had one qualifier with the three remaining rounds of qualifying on Saturday and concluding with main events on Sunday.

In the 4wd Modified class, or Wheeler as they call it in the upper Mid-West, Team Associated’s Ryan Cavalieri set the fastest time in three of the four rounds to put his Factory Team B44.1 in the #1 grid spot for Sunday’s main event. With racers from all over the country in attendance the main events were loaded with talent that was separated by mere seconds over the five minute qualifiers. Team Associated racers Ryan Cavalieri, Chad Due, Steven Just, Josh Hohnstein, Sean Cochran & Michael Paige along with many other Associated vehicles occupied a majority of the “A” main spots.

As the finals got underway on Sunday, Cavalieri picked up where he left off in qualifying in the 4wd Modified class by handily winning A1 and A2 and securing the overall title. This latest title just accentuates the outstanding year Cavalieri and his B44.1 have enjoyed, highlighted with his ROAR National Championship.

In the Modified Short Course class, Chad Due and Ryan Cavalieri stalked Top Qualifier Dustin Evans from their 2nd & 3rd place starting spots. A mistake by TQ Evans caused his truck to break and the battle was on between the Associated teammates. Cavalieri matched Due move for move and was never more than a second from the Reedy/LRP powered SC10 of Due. Nerves of steel and a slight bobble late in the race allowed Due to cruse home to take the win in the Modified SCT class to the cheers of his local track fans. Additionally, privateer Ben Schultz took his Factory Team SC10 to the TQ and win in the 17.5 SCT class.

Thanks to Trackside hobbies for hosting a great event and if you’re in the mood for a great, well run event be sure to get the Spektrum Off-Road Challenge on your calendar for December 2011. Until then, congratulations to the winners and see ya next year.