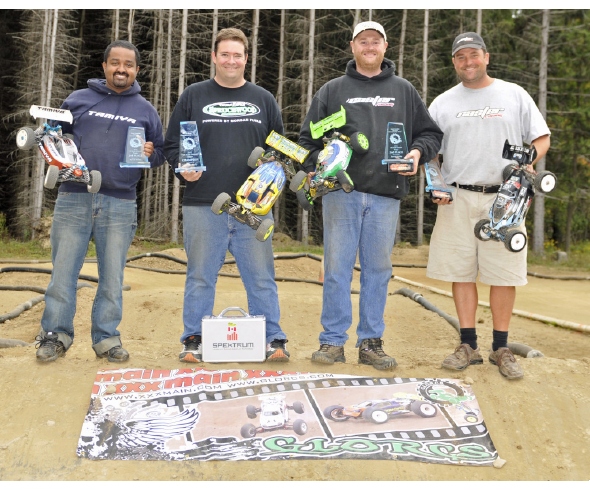 Caster Racing USA is pleased to announce that Great White North Team Captain Kevin Taylor has created some stunning results for Caster 2010 and the results are finally in for the GLORCS overall results. Out of over 100 entries in Nitro, Caster ended up in 10th and 11th proving the durability and reliability and competitiveness of the zx1.5r. However, the big announcement comes from the electric side of things where Caster is more well known. Caster ended up in 3 of the top 5 overall positions.

Kevin Taylor Canadian team captain had this to say.

“I now have the results. We did very well in nitro, but not quite as good as I had expected. It turns out one of our team drivers, Brian (Gump) Belanger, finished 10th overall in nitro, while I narrowly missed the top ten, finishing in 11th place overall and Bryan Cote finishing an awesome 16th. For a long list of reasons, our other drivers weren’t quite as successful this season, but watch out next year!!! HAHA… I should point out that this series draws upwards to, or more than 100 racers per venue, so this is exceptional news to say the least.

On an even more exciting note, and in addition to Gump and I finishing 2nd and 4th overall, Bryan Cote finished 5th overall!!! Sooooo…3 Casters in the top 5!!!

I can’t even begin to describe how happy I am about the way 2010 went for us up here, and in the wake of it all, many many Caster’s have been purchased. We are proving that although the cars aren’t the best in the world, they certainly can compete with them! The Fusion is absoluuuutely in a league of it’s own. Despite what so many people have said about Caster, there have been drivers of other chassis make comments about how the EX-1.5R MAY BE the best electric car on the planet right now. The results speak for themselves”

Of course, when Brian Bellinger responded, he said this.

Oh Mr. Taylor, the results are even BETTER than you may have imagined. Here’s the COMPLETE picture: