It’s the 1950s and you’re looking to rule the strip as well as the streets. What do you build? A 1957 Chevy gasser would fit the bill quite nicely. You get that done, now what do you do? How do you top your already over the top gasser drag car? Well, by building a custom 1954 Ford F100 COE flatbed tow rig of course.

The combination you see before you is the result of that very scenario, only that it’s built down-scaled and 70 years after that timeframe. But let’s not dwell on that. This custom RC truck build is what we want to dwell on instead. The creator of this dream mash-up, Scott Lempert, takes us through his process of the builds and details for us on how he got these amazing vehicles done. Now let’s hear about it in Lempert’s own words… 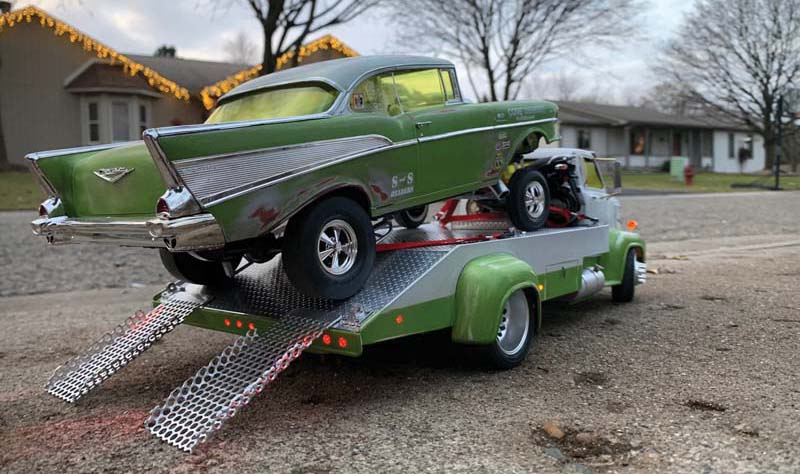 The inspiration for this build is based on my love for 1950s Ford F100 trucks, especially COE models. Cab-over, also known as “cab over engine” (COE), cab forward (U.S.), flat nose (Canada), or forward control (UK), is a body style of truck, bus, or van that has a vertical front, “flat face” or a semi-hood, with the cab of the truck sitting above or forward of the front axle. This configuration was originally created to shave overall length from the truck, but it also raised the driver’s position for improved vision while driving.

I have seen quite a few COE’s of various brands but kept looking at the 50s Ford F1/F100 as something I would like to build. I investigated 3D printed bodies, but at the time, everything I had seen had resolution issues, print lines that I knew would create bodywork havoc for me.
I kept looking at Tamiya’s Midnight Pumpkin raw body, I could see a COE in it but couldn’t quite figure out how to morph the stock body which is approximately 1:12 scale into something closer to 1:10 scale and into a COE.
I went ahead and got a Midnight Pumpkin body, researched 50s COE’s and noticed that the body lines were all there in the 1:12 scale body but just needed to be moved around a bit. So, I cut apart the Midnight Pumpkin, I widened it by 5/8-inch and reassembled the various parts by adding some styrene here and there while I reinforced the underside of the body.

I made the COE’s grill from scratch, as well as the truck’s interior, visor, and fender mounted marker lights. The paintwork was done to mimic the companion ’57 Gasser model kit, which is another story and is covered later on this this story. I added the F100’s patina work and scallops by hand for some extra detail.

I figured early on that this would be a car hauler, so the chassis construction began with quarter-inch square steel stock. I heated it to create a “C” frame design. I used an Eastwood tubing bender and a Mapp gas tank from Lowes to form the frame. Getting the metal “red hot” made it quite easy to form with the bender. I tried to make this one with just curving the corners of the frame.
The rear suspension is made up of LESU faux air bags with internal springs, fabricated lower control arms and wishbone with SCX10II rear axle. Up front is a King Hauler unit with 1/16 scale Traxxas E-Revo shocks. The wheels are RC4WD Chaos in the front and rear. For extra scale detail, I added an engine; a 3D printed Exclusive RC 5.9 Cummins. The real power for the F100 comes from a 17T brushed motor w/60a ESC. All stainless-steel hardware by KNK Hardware and an ESS One sound box is under the “hood” adds some more detail.
The Details 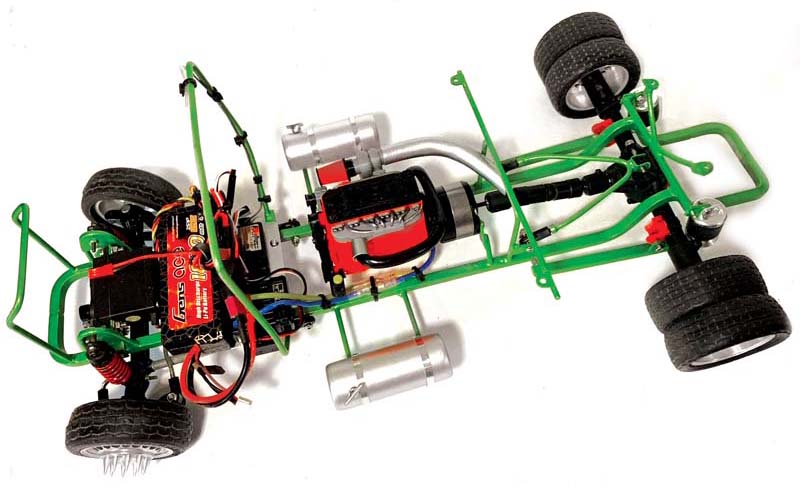 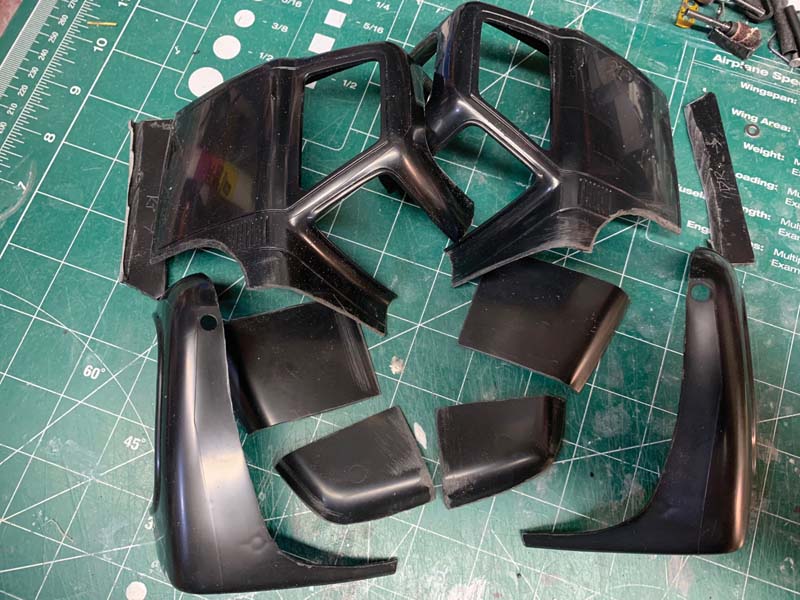 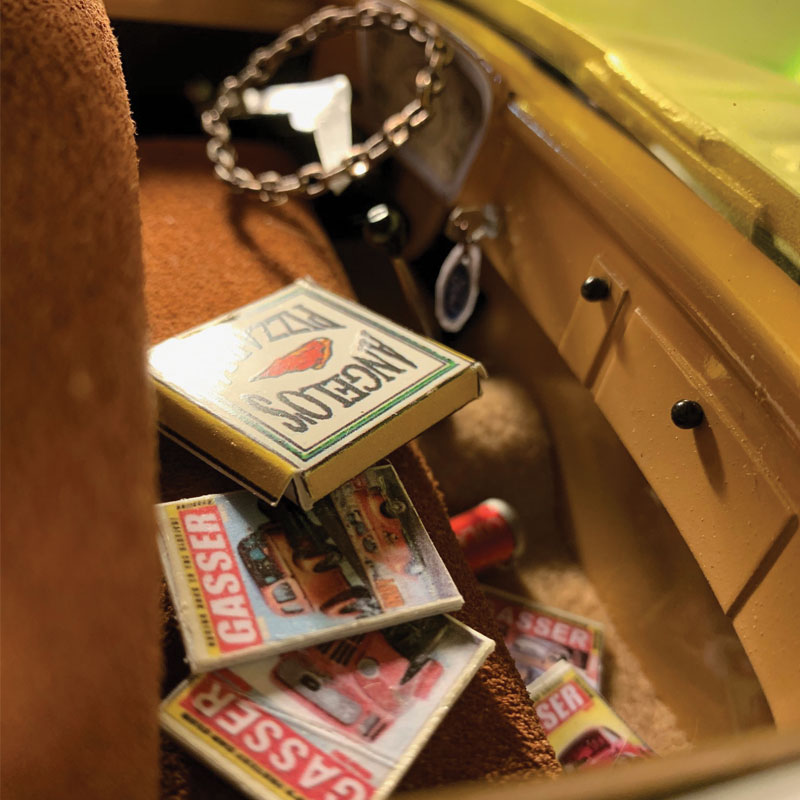 Once I had the bed roughly made, I went to grab one of my Gassers to check for fit. I completely forgot that while I widened the cab the scale was still smaller than 1/10. The Gasser was huge when compared to the COE’s deck. After a few choice words, I figured something closer to 1/12 scale Gasser would need to sit on that deck. I remembered that I had an old unassembled Monogram 1/12 scale ’57 Chevy model kit sitting on the shelf. After setting the body on the deck of the COE, I was relieved to see that it fit perfectly!! Please note that the ’57 is a static kit, not an RC. I wanted a Gasser on the back of the F100 so I went through and quickly built the model kit Gasser. 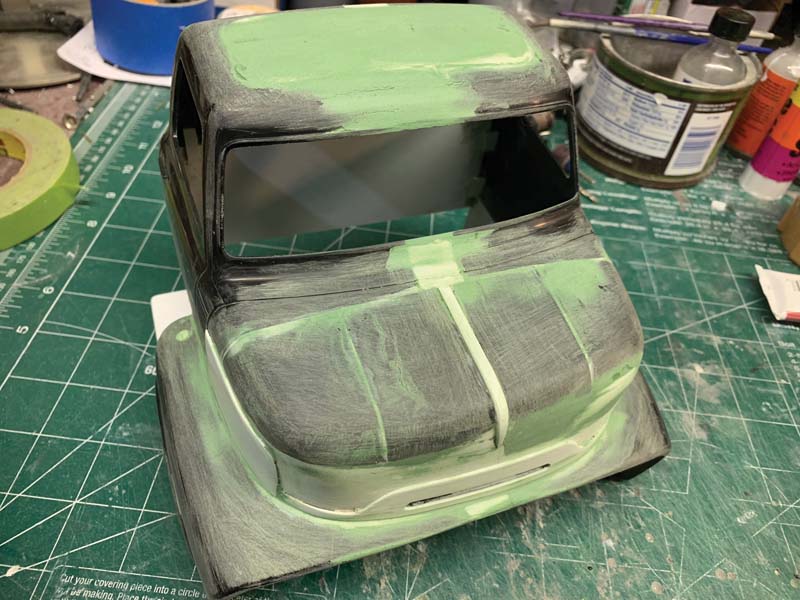 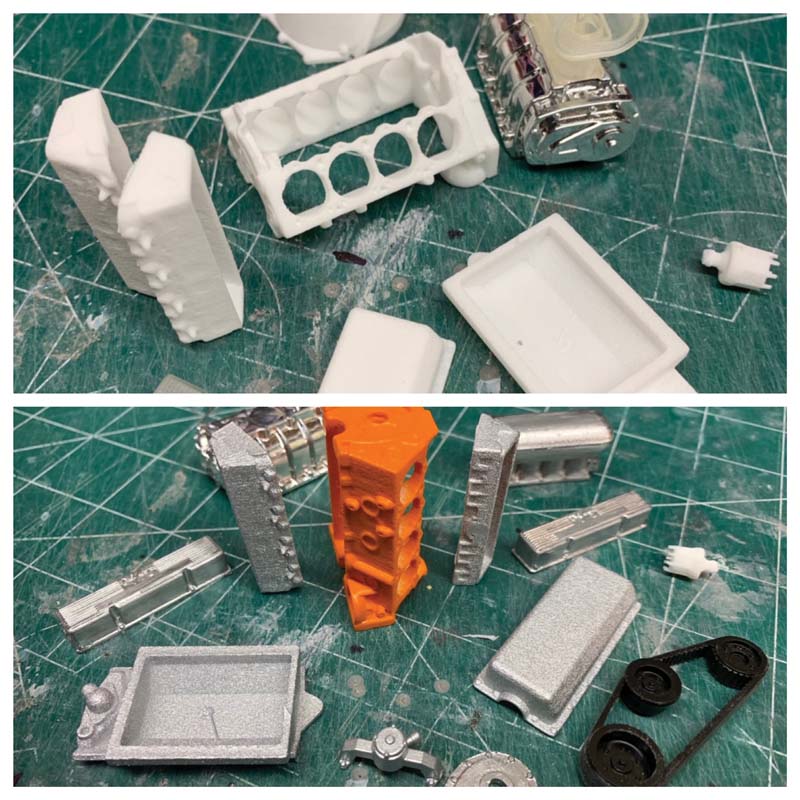 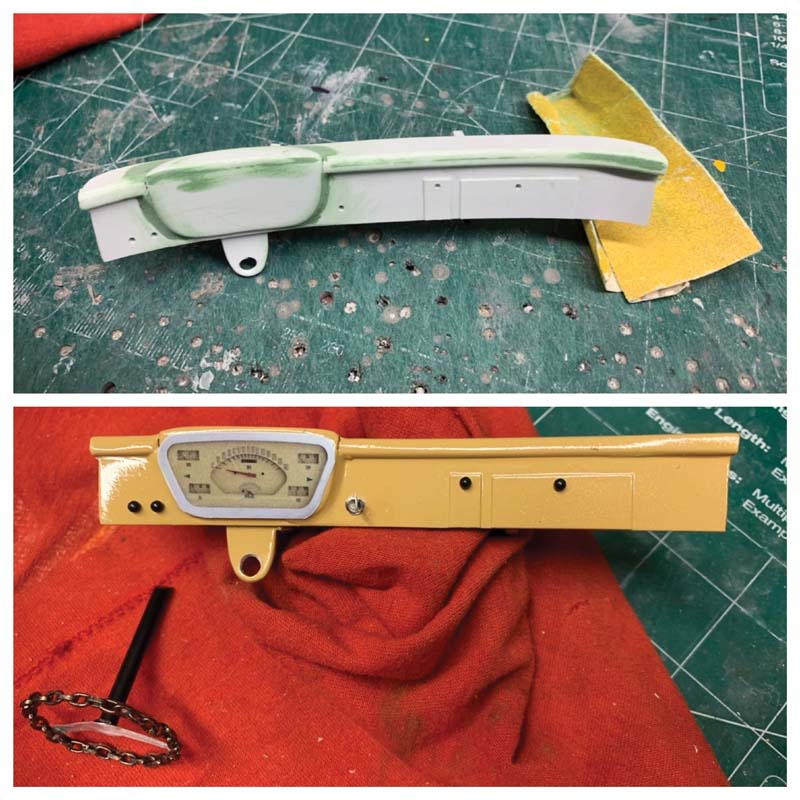 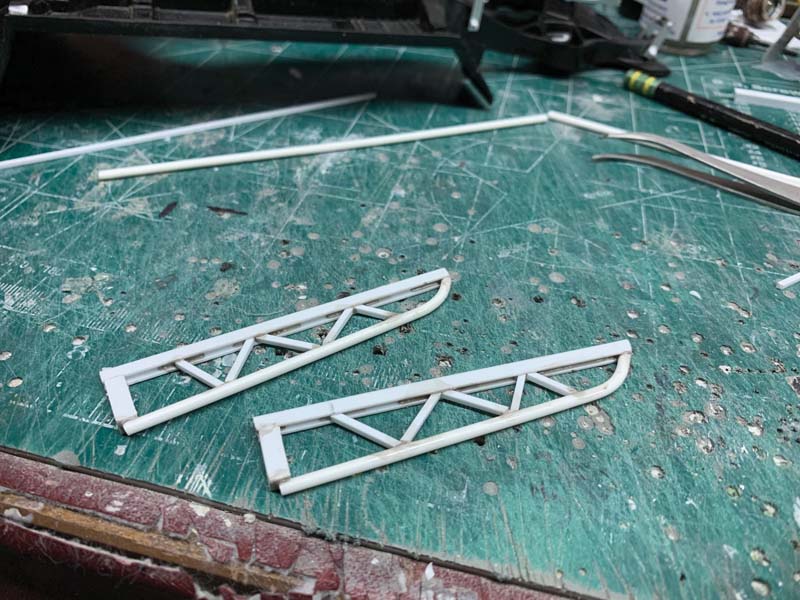 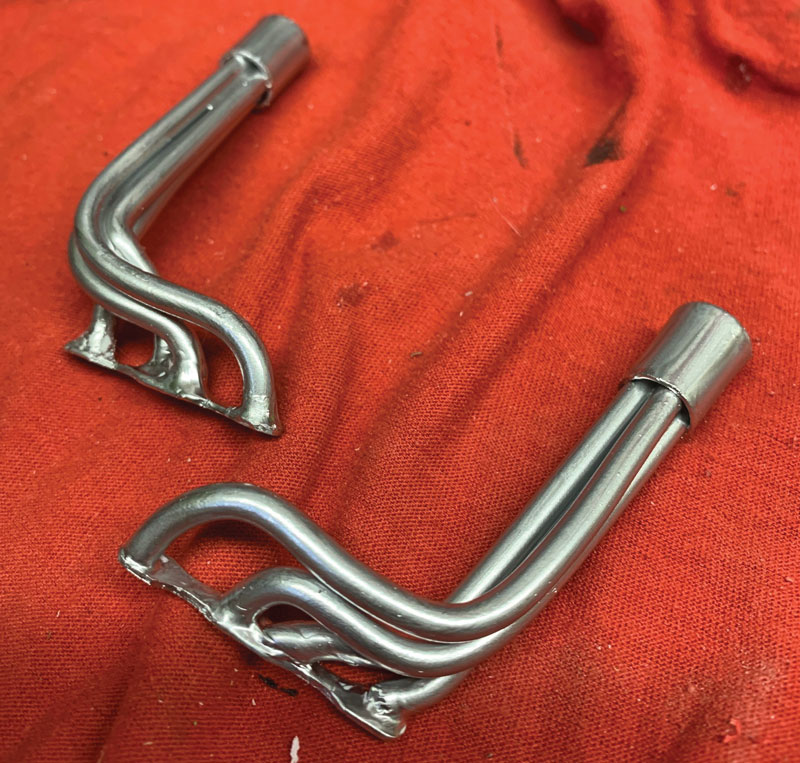 I made a quick inventory of the ’57 parts, which I used a few of them including the interior, body, hood, glass, rear axle and bumper and a few chrome parts. I inverted the rear axle, placed it under the leaf springs. I made the front straight axle suspension with leaf springs and shackles from scratch – all styrene, I used the front hubs from the kit as well as the Cragar wheels, tire’s and slicks.
I also made the ladder traction bars. I found a resin small block Chevy with a supercharger and hand made the fender well headers and Moon Tank, which is a wooden keg from Michaels. Paint is Tamiya Lime Ice and silver over red oxide primer with some Kosher salt in select spots to create some “rust” then sanded to taste. Yes, I said Kosher salt. Add the salt to the wet primer, add color coats over the primer let dry and sand till the effect you like is uncovered. 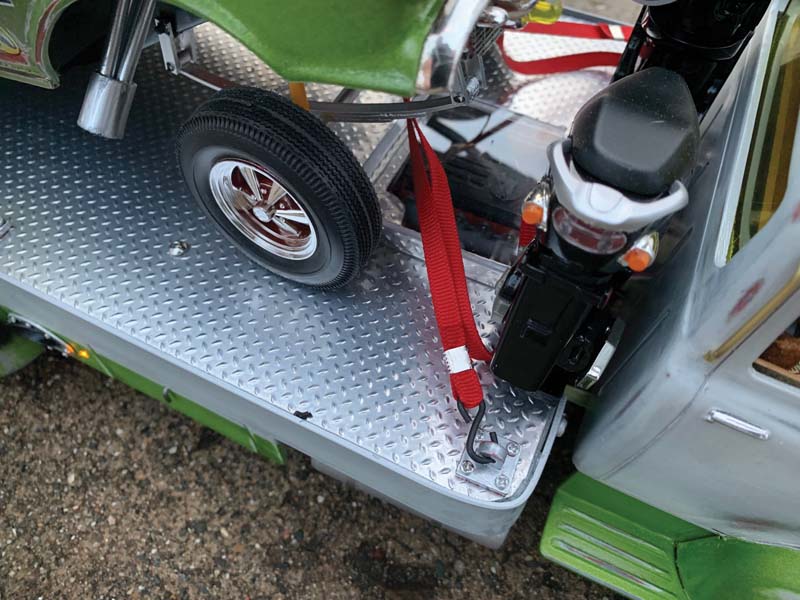 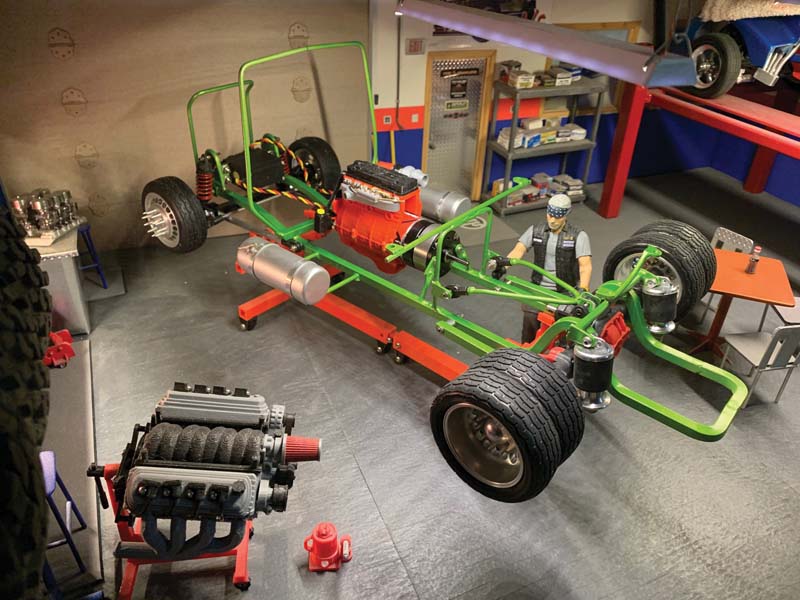 The completed 1954 F100 COE with a ’57 Gasser on its back is an impressive site to behold. Kit bashing a Tamiya Midnight Pumpkin body into a COE rig is inspired. Although the Gasser itself is a static model kit, the overall look of the combo is a true head turner for sure. Hopefully this inspires you to see what you can create. It’s got the gears in our heads turning for sure. 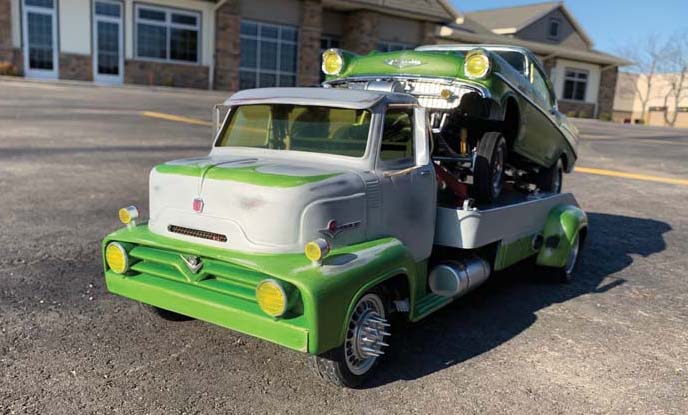