The El Camino is a muscle car legend. Decades before the term was coined, it championed the concept of the crossover vehicle. Launched originally in 1959 as a response to Ford’s similar Ranchero, the El Camino was essentially a two-door station wagon (think Chevy Nomad) with the roof chopped off behind the front seats, forming a car-based pickup.

Produced initially on the full-size platform shared with the Impala, the El Camino was re-introduced in 1964 on the brand-new midsize Chevelle/Malibu chassis and the option sheet was quickly expanded to include the full range of Chevelle engines—including the Super Sports! That proved to be the goldilocks formula; performance exploded and sales soared. Top of the range was the mighty 375-horse L78 big block from the Chevelle SS396, and the El Camino got its own Super Sport trim option starting in 1968. That’s how Kyosho’s new Fazer is decked out with its SS396 badging prominently displayed on the’69-style grille. 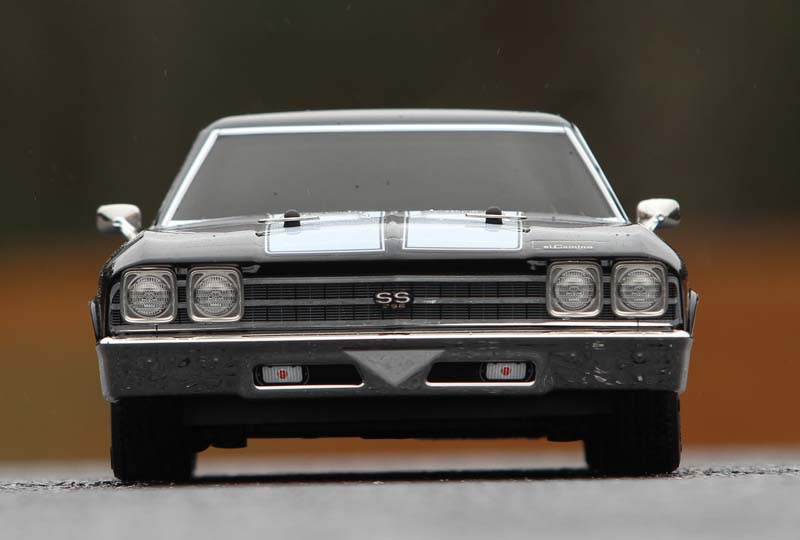 The key to success for Kyosho’s muscle car themed on-road cars over the last few years has been the styling. Kyosho is also a respected name in the arena of diecast replicas, so its product designers have a keen understanding of the importance of the little details in capturing the authentic look of a classic car. From the longer wheelbase (to produce more accurate muscle car proportions) to upscale surface detailing to authentic looking wheels and tires, the Fazer series of muscle cars goes well beyond the typical semi-scale shell slapped onto a stock touring car chassis.

Now Kyosho has an Mk2 version of the Fazer riding wearing this gorgeous new 1969 El Camino SS 396. The El Camino comes in “Readyset” configuration—Kyosho-speak for fully ready to run. All it needs is a battery pack (6-cell NiMH or 2SP) and four AA’s for the transmitter. That means you’re just moments away from peeling the tread off the scale-looking tires and reliving the muscle car golden age in 1/10 scale!

The Fazer Mk2 tub chassis is built to take a beating, with sealed gears, plus braces and reinforcements protecting all the steering and driveline components. The wheelbase is about half an inch longer than a typical standard touring car chassis, which helps give more realistic proportions, although since the 1969 El Camino has a 116-inch wheelbase the 10.79 inch FZ02L is still a little short to be precisely 1/10.

The extra length should help with stability too. The Mk2 has added an upper deck plate over the front part of the chassis, giving extra protection to the steering servo and receiver as well as increasing stiffness. The Mk2 has switched to a belt-mount for the battery, giving additional flexibility for a variety of pack configurations. 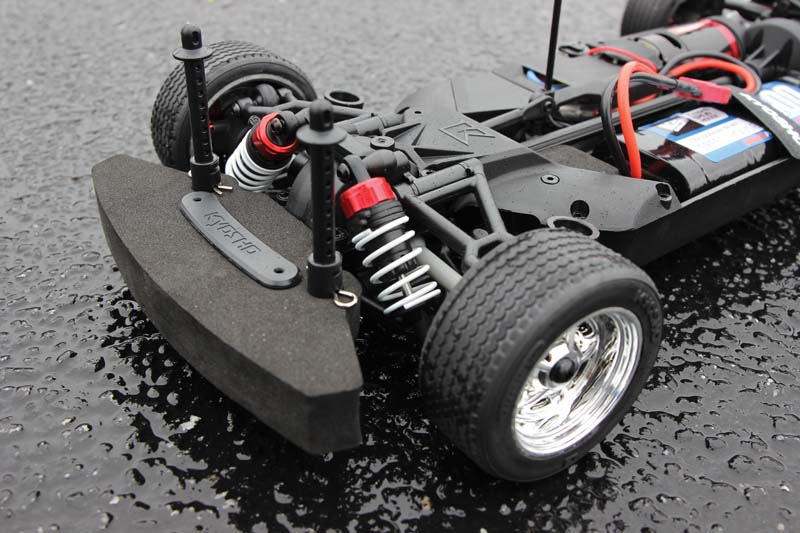 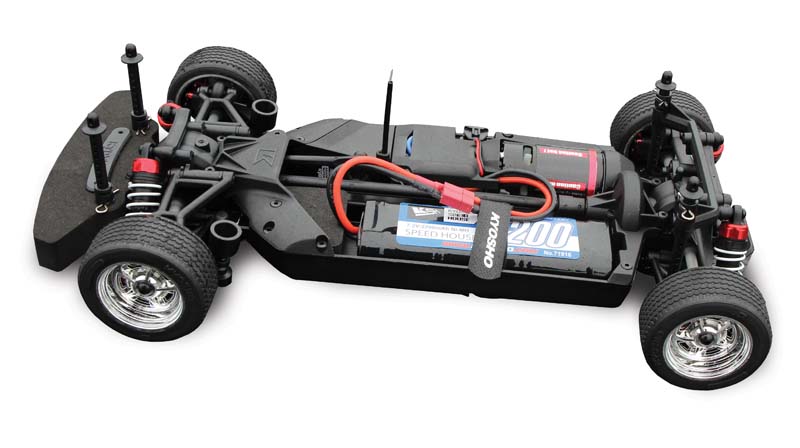 The tub chassis of the Fazer Mk2’s wheelbase is about half an inch longer than a typical standard touring car chassis. This helps give more realistic overall proportions to the Elky. 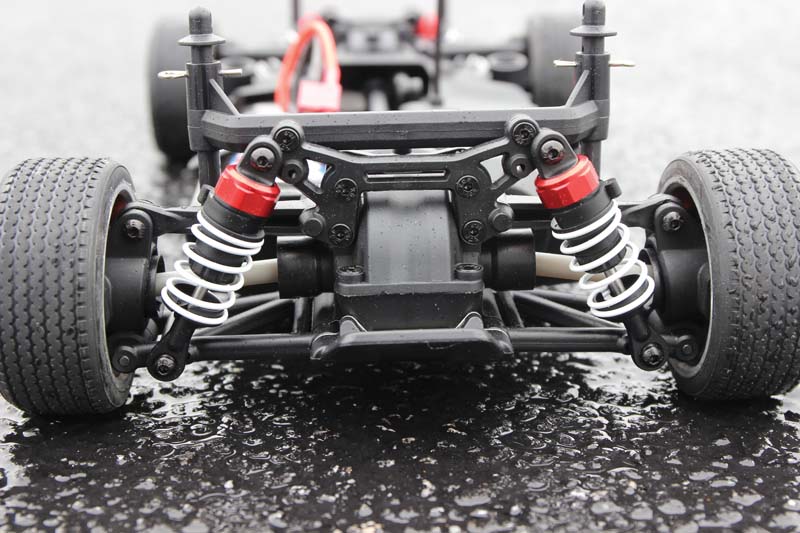 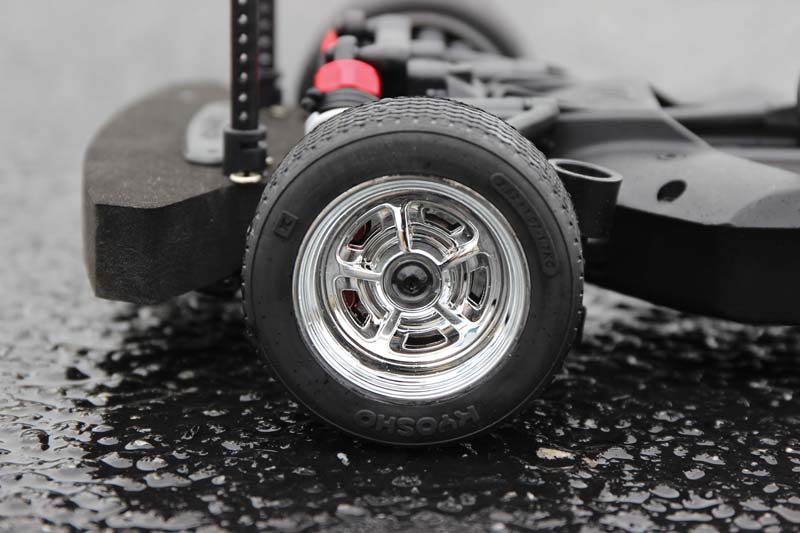 The El Camino is a basher at heart, so Kyosho tuned the suspension for stability over a variety of on-road surfaces. The Mk2 switches to a new double A-arm front end with revised bump steer and scrub radius settings to give reliable steering and suspension actuation over slightly rougher and less grippy surfaces that this car will spend most of its life on.

The setup also utilizes increased parts interchangeability between front and rear to simplify maintenance. While the suspension arms are fixed length there are a couple different mounting locations for the dampers, and the plastic-body shocks themselves are fluid-filled and feature anodized aluminum caps, making them re-buildable, which gives a bit of tunability for those wanting to tinker with their Elky’s handling. 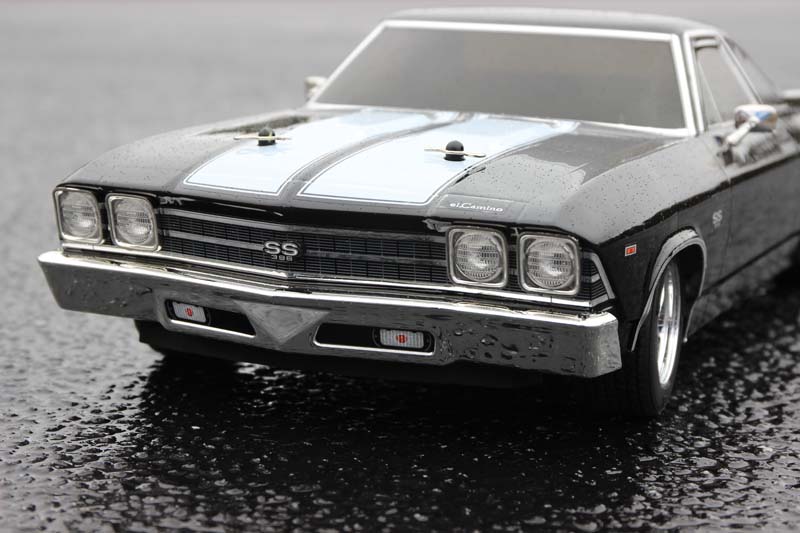 The heart of any SS396 Chevy is burly big block horsepower and tire-shredding torque. Providing the twist in Kyosho’s 1/10 version is Kyosho’s 14-turn G-series stock brushed motor. Designated the G14L, the 550-class motor is set into a clever new fixed gear mesh motor mount. The stock gear set has a 32T pinion to go with the 68T spur gear for a final ratio of 6.54:1, but Kyosho offers a total of nine pinion gear options ranging from 29 to 37T so you can gear your Elky for your particular preference of strong launches or top-end speed.

The speed control is Kyosho’s Speed House 60A waterproof ESC which sees duty in a variety of both on- and off-road vehicles so it is well-sealed and can handle 2-3S LiPo or 6-8-cell NiMH packs. Ours was run primarily on Kyosho’s own 2200mAh 7.2V NiMH pack, but some extra performance can be had with higher cell counts.

Let’s be real—the biggest selling point for this car will be its classic muscle car looks, and the half car/half truck configuration of the El Camino is as unique as it is iconic. Kyosho calls it an “Ultra Scale Body” and key to capturing the look of the ’69 Elky are the use of separate fascia moldings for the front and rear, allowing them to capture the contours and undercuts of the body more faithfully.
It also means that if (more likely when) Kyosho decides to release a 1969 Chevelle version of the Fazer, they will already have the front fascia molding because from the A-pillar forward the El Camino and Chevelle are identical. The real El Camino technically rides on the chassis of the Chevelle wagon so its wheelbase is 4 inches longer than the coupe, which means the Fazer chassis should technically be about half an inch longer to be truly 1/10 scale, but that minor discrepancy isn’t really visible.

What is visible are the separately molded chrome bumpers, mirrors and trim, and little extras like the flared wheel arches, the raised emblem on the grille, and the nicely applied chrome tape strips on the window surrounds, wheel arches and bed lip. The headlights even have realistic chrome bezels and translucent lenses so they’re ready for a light kit if you want to install one. The El Camino is sprayed in Tuxedo Black with white SS stripes that look great with their delicate pinstriped edges. 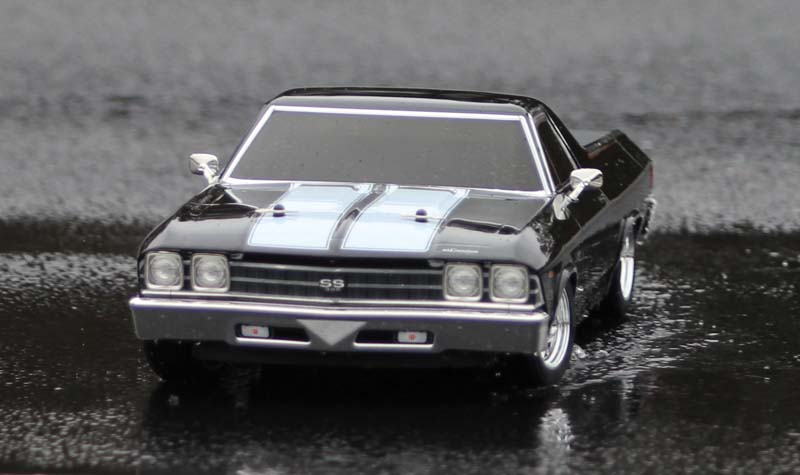 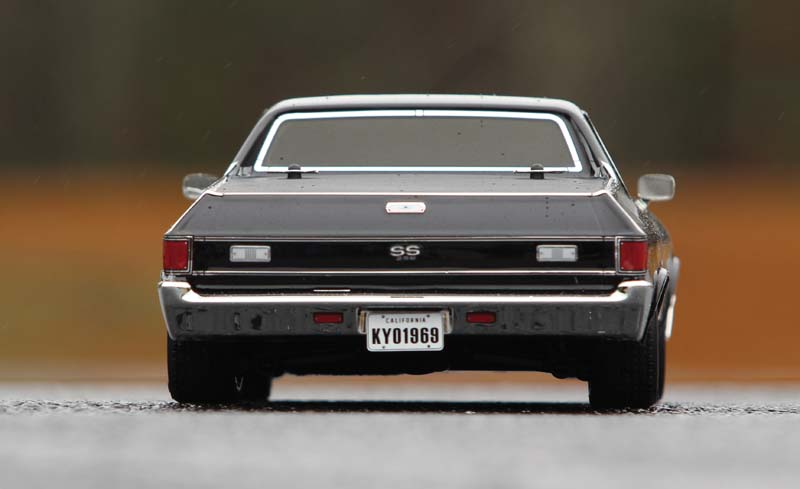 The scale body is only part of the formula for this El Camino’s winning appearance. A muscle car like this would look ridiculous wearing a set of generic touring car rims with scrawny little ribbon sidewall tires. Instead, Kyosho modeled some vintage-look chrome wheels. Interestingly, Kyosho refers to them as “Rostyle” type wheels, but Rostyles were actually British copies of American-made Magnum 500 wheels which were a staple on the El Camino and other Super Sport Chevys (among others).
All they need is a little flat black paint in the valleys between the spokes and they’ll look just right. They’re wrapped in tires with realistic tall-sidewall treaded tires. These won’t be mistaken for racing rubber, but they should offer plenty of grip for the Fazer’s power level and ride height. One cool feature are the simulated brake disc wheel hex hubs. Technically the real El Camino only offered disc brakes on the front, but we won’t quibble because these hubs offer two different offsets to allow the Fazer to be compatible with both 190mm-wide (like the Elky) or 200mm-wide bodies.

Feel at the Wheel

Radios are one category where RTRs sometimes come up a bit short. Not so with Kyosho’s Synchro KT-231P+ transmitter. The soft rubber backstrap and foam-wrapped wheel (canted at a thoughtfully-designed angle) should fall comfortably to hand for most drivers. It comes with all the features you could ask for too: trim and end-point adjustment for the throttle, trim and dual-rate for steering, servo reversing on both channels, low voltage warning, and a charge jack if you want to swap your AA alkalines for rechargeable cells. Best of all, the adjustment knobs and switches are cleanly laid out, comfortably sized and spaced, and marked with clearly legible labels, making adjustments quick and accurate. No squinting or fumbling to get your car dialed in with this one! 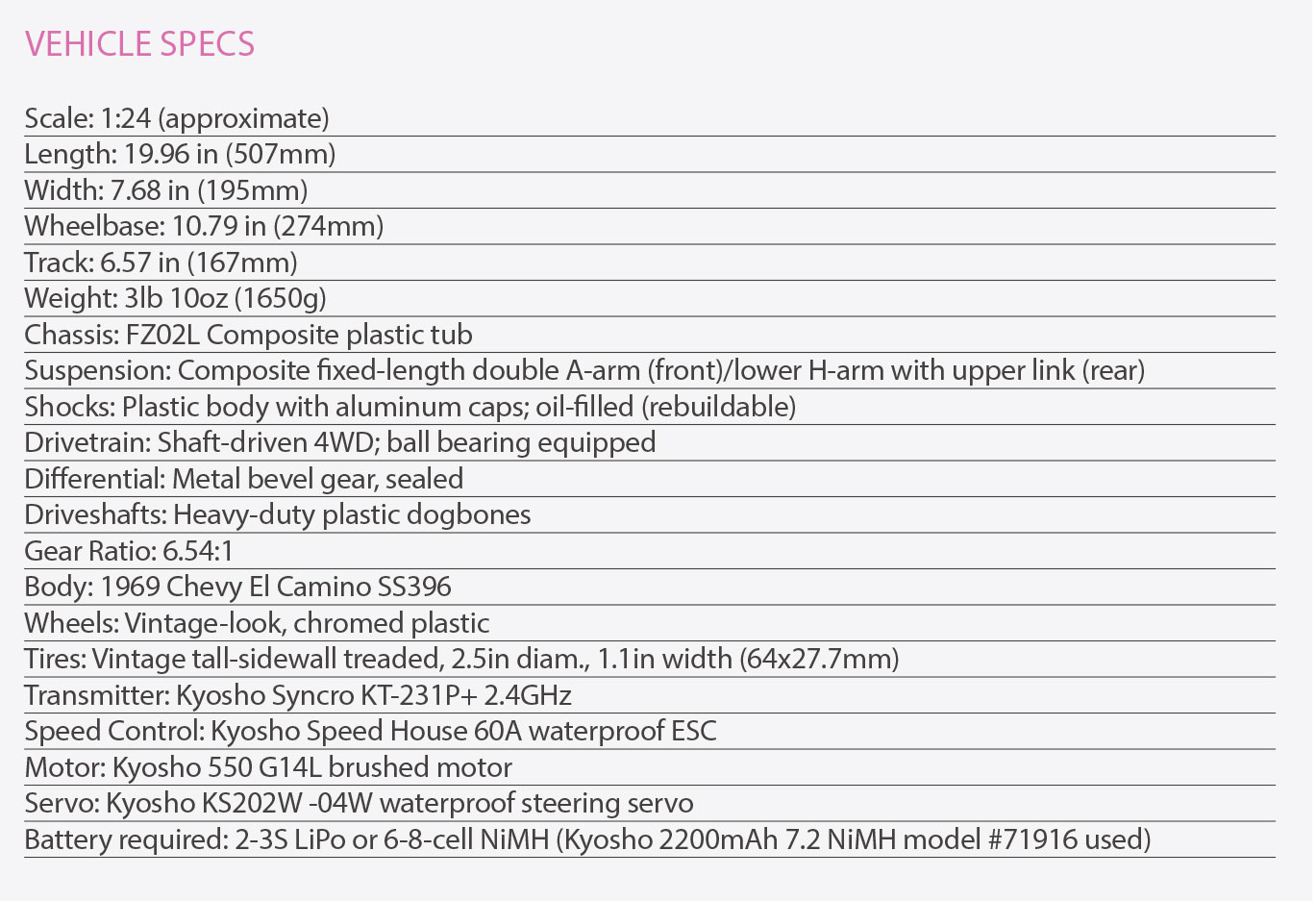 I have always respected Kyosho’s dedication to scale-accurate detail in its diecast product line, and I see some of those same sensibilities represented in this RC El Camino. Most of the folks who buy this car will be doing so primarily for its looks, and a fair number of them will probably be RC novices who drive this car on unprepared surfaces of questionable quality. For those drivers in those conditions the Fazer’s longer wheelbase, taller ride height, fixed suspension geometry, and treaded tires are all perfectly suited. The wide range of compatible battery types is also a plus, and Kyosho’s emphasis on durability means the chassis should hold up well to the inevitable beating and banging that basher duty will expose it to. Hopefully such obstacles won’t be too hard on the body though, because the Kyosho ’69 El Camino is one worth preserving!