It’s no secret that ready to run (RTR) RC vehicles have come to dominate the RC world in recent years. Their appeal is obvious, who wouldn’t want the instant gratification of being able to run their RC within minutes of unboxing it? As great as that sounds, those of us who grew up building their RCs understand the gratification and importance of constructing their vehicle with their own hands.

For us older kids, we didn’t have RTRs growing up so in order to partake in the RC hobby it was a necessity to build your own kit. This means getting acquainted with tools, techniques and reading the instructions. As silly as it might seem, this seems to be a lost art in this modern day of instant everything. Who needs instructions? If it broke, throw it away and buy another one. What happened to understanding how things work and fixing things when they break? 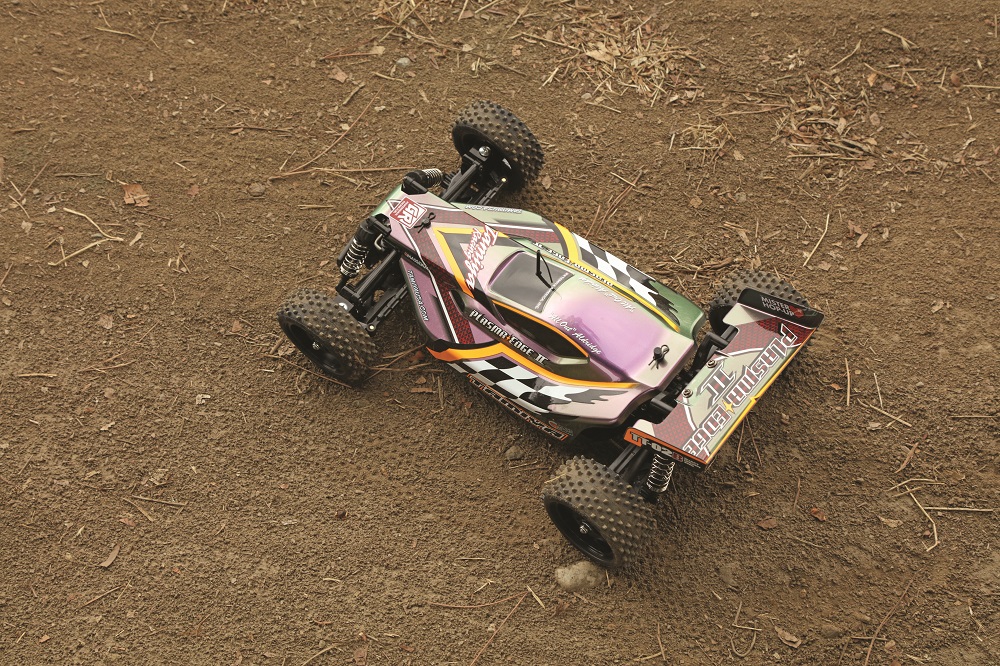 Building your own RC is educational, rewarding and is a fun experience. For those who have only grown up with RTRs, and may be intimidated by a complete ground up build, or for those who have little ones around that you want to introduce to the hobby, Tamiya has just the kit that you’re looking for.
Tamiya, known for its high quality RC kits that come together perfectly every time, has released a kit that looks to bridge the gap between RTRs and full-blown assembly kits. The premier kit in what we hope becomes a line of kits, is the First Try R/C Kit TT-02B Plasma Edge II. The First Try R/C Kit comes semi-assembled from the factory so that the build difficulty and time to competition are slashed to a minimum. 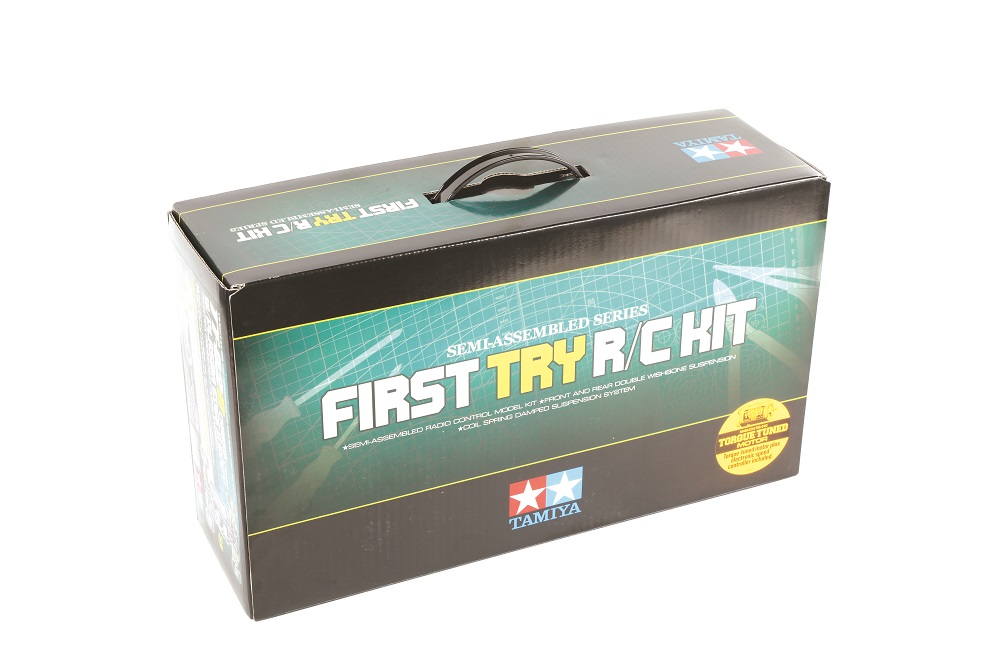 Unboxing the First Try R/C Kit reveals preassembled components in clearly labled bags, a prepainted and precut body as well as clear instructions, all of which made final assmebly a breeze. 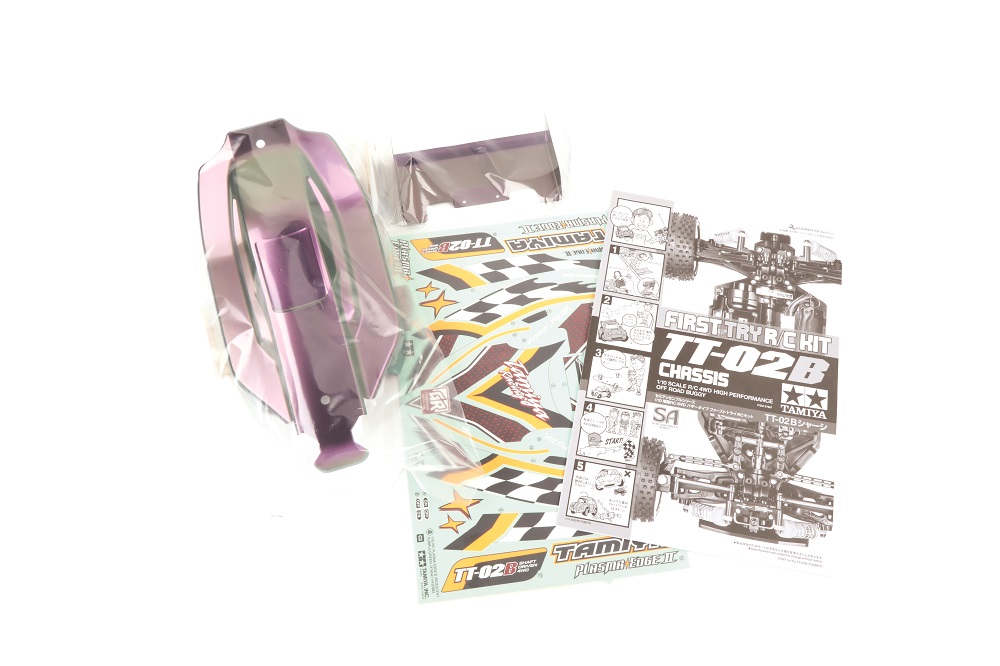 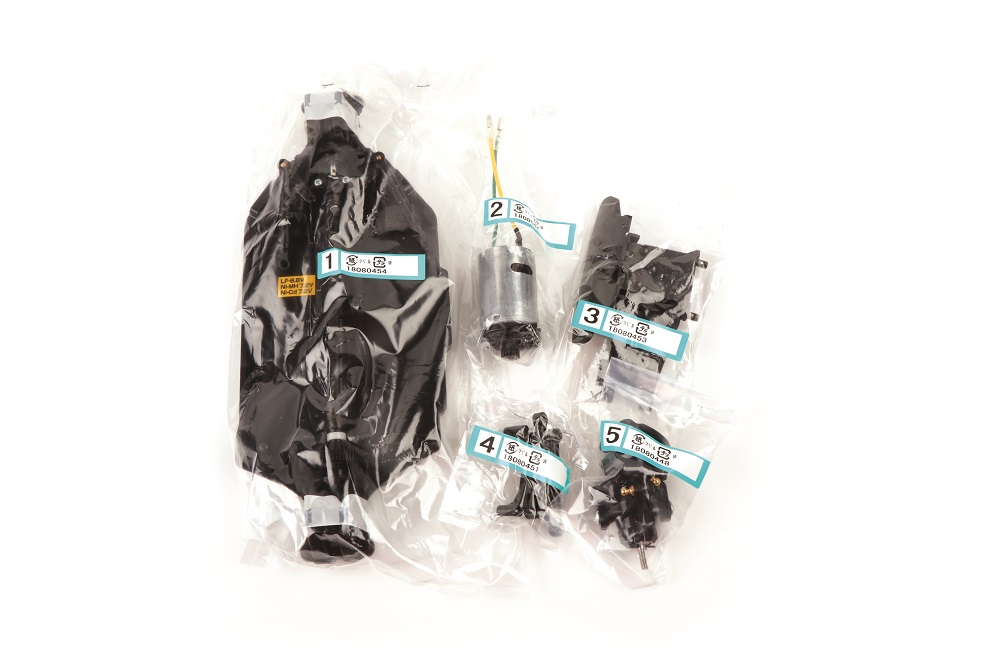 The more technical (or tedious, depending on who you ask) parts come preassembled so that you can push on and have an RC building experience while being able to hit the pavement or dirt in no time. We found that it’s the best of both worlds. You get the fun of building without getting mired down with the most intricate bits of assembly. You (and your mini-me) can also gain an understanding of just how your vehicle works so that if something goes wrong, you are armed with the knowledge of how to fix it and even how to upgrade it. On the flip side, you’ll spend much less time on the workbench and be on track much sooner than with a full assembly kit.

Before we move on, let’s first take a look at the vehicle that serves as the initial offering in the (hopefully) First Try R/C Kit line. The Plasma Edge II off road buggy’s TT-02B chassis is a highly adaptable and beginner-friendly 4WD chassis that features 4-wheel double wishbone suspension and a shaft-driven driveline that gives great performance on and off the road. It’s a performance buggy with plenty of upgrade parts available for when it comes time to up the performance ante. In other words, it’s a great beginner’s buggy that has room to grow along with its driver’s technical and driving skills.

Examining the Plasma Edge II’s factory assembled parts, we discovered that the kit includes complete or semi-complete assemblages such as the a completed lower deck with front and rear gearboxes, a motor and mount with its pinion gear properly spaced and pre-installed, completed suspension arms and uprights, semi-assembled dampers, glued wheels and tires and more. We have to say that seeing that the diffs and dampers were ready to go right out of the box was all gravy on our end as those are two components we don’t like assembling ourselves very much. 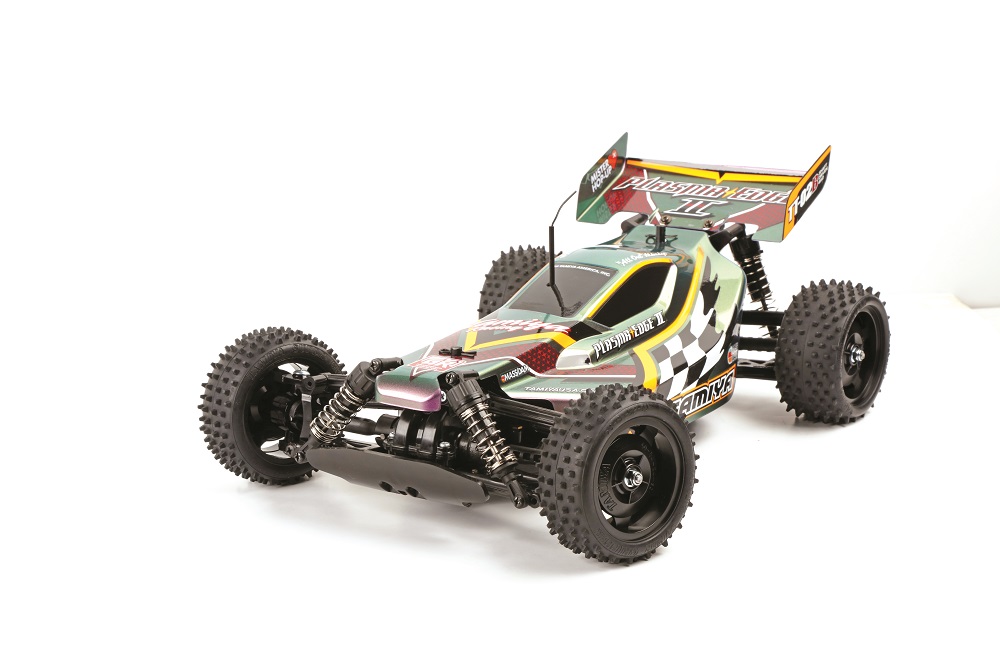 In usual Tamiya fashion, the kit came with clear instructions, clearly labeled parts bags, a fully painted and trimmed body, colorful decals and as mentioned earlier, preassembled parts. We laid out the parts, prepared some basic tools, previewed the instruction booklet and took mental inventory of what needed to be done. Tool wise, we only used couple of screwdrivers, side cutters, scissors to open the bags with and a hobby knife to cut the decals with. That’s it. If you can assemble a shoe rack, you can put this RC together.

We took on the First Try R/C Kit to see how we liked the build experience and to our surprise as seasoned builders, we liked it much more than we imagined. The kit came together much quicker than expected, as we bypassed the assembly of the gearboxes, some suspension parts and shocks. We did need to assemble the components together, add shock oil into the shocks and bleed out air bubbles as well as install the electronics. Our assembly time minus adding decals to the body came in just under two-hours, which falls much shorter than if we were assembling a TT-02B from ground up. Your mileage may very; our point being that this is a fantastic kit for first timers as well as seasoned builders who just want a no-fuss kit to assemble. 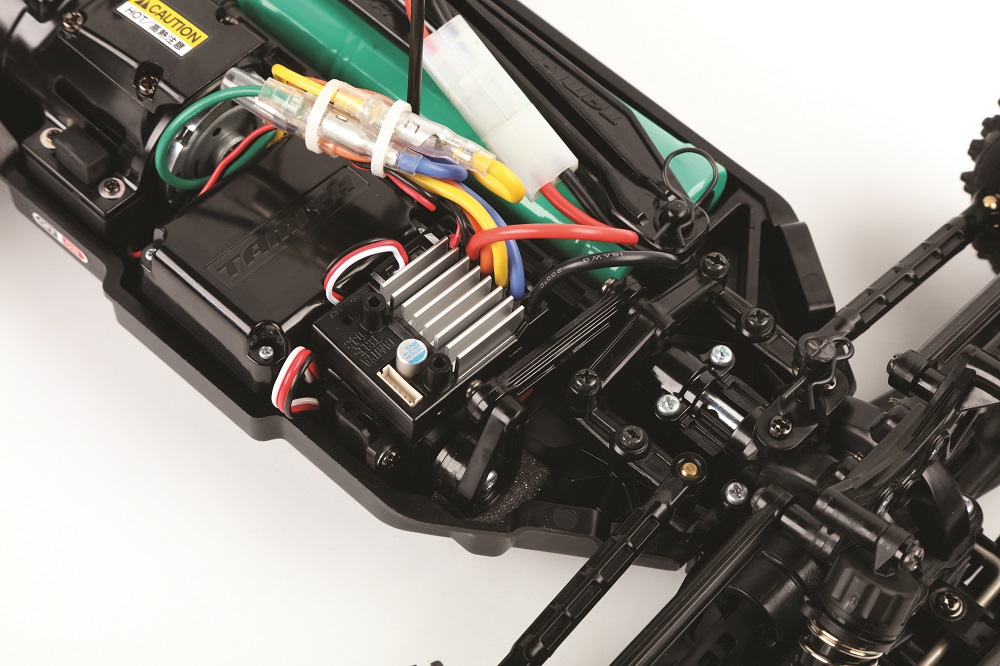 An upgraded motor and this Tamiya TBLE-04 ESC are included in the kit. We found the ESC’s set up to be quick and easy. 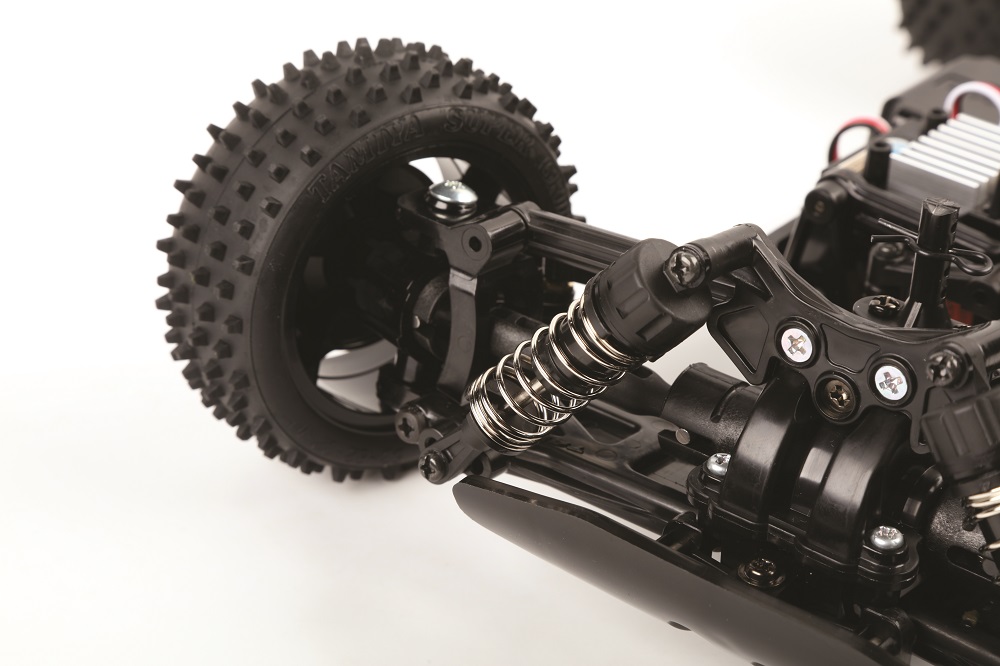 The buggy’s dampers come preassembled and only requied oil to be added before for installation. 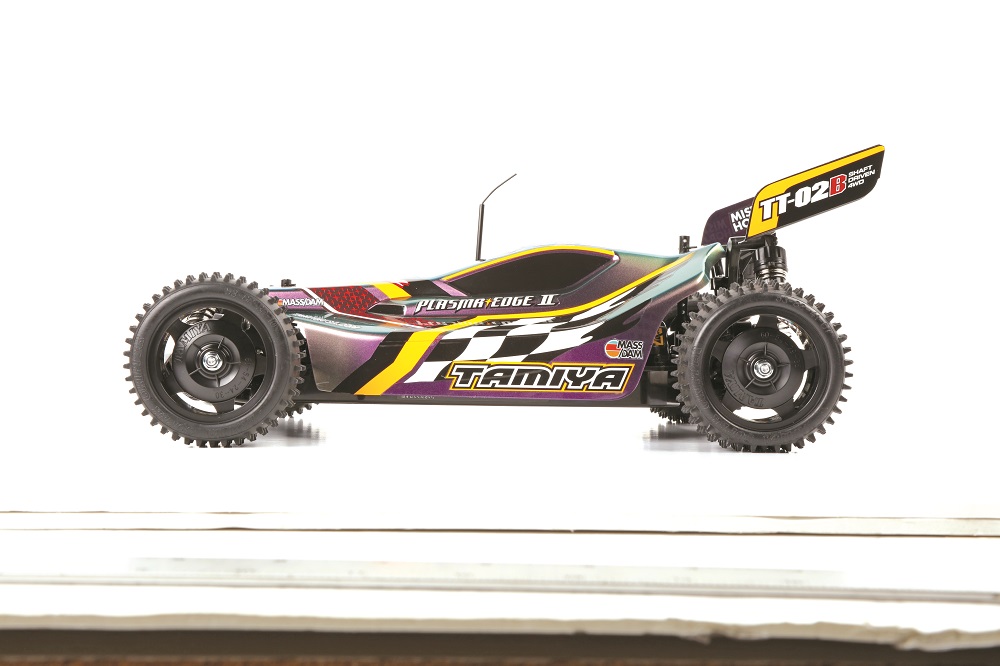 It’s worthy to note that our kit came with a Torque Tuned brushed motor as well as Tamiya’s latest TBLE-04S ESC electronic speed controller. The ESC is capable of running both brushed and brushless motors while the upgraded motor features a bit more oomph than a standard silver can 540 motor. The inclusion of both items helps keep costs down, which is appreciated in a kit geared towards beginner RCers. The only things we needed to add to the kit were our own receiver, steering servo and battery. Once those items were installed, we moved onto the body.

Can we stop and talk about the Plasma Edge II’s body for a minute? The body and wing come precut and painted from Tamiya, ready for sticker application. As you have noticed, the body is finished in an iridescent, color changing shade of purples and greens. It’s memorizing to look at and is hard to capture in pictures properly. Trust us when we say, it’s a total head turner; we can see why Tamiya decided to offer it in this fantastic color.
A colorful decal sheet is included with the kit, which we dutifully applied. To our surprise, the decals for the First Try kit are not precut, and requires cutting with a hobby knife or precision scissors. We chose the former tool and applied the decals in short order. With so much coverage, we expected to butcher some of the decal job but the material is forgiving and pliable enough that we were able to avoid wrinkles and air bubbles. The graphics do look really good, don’t they?

Only hours after opening its box, we found ourselves at our local park ready to give the Plasma Edge II its maiden run. We inserted a 7.2V 6-cell NiMH battery and got cracking. The buggy did what off road buggies do and that’s to tear up terrain with gusto. Its shaft-driven 4WD drivetrain gives it plenty of grip and control while its 4-wheel double wishbone suspension is supple enough to hug the loose gravel, powered dirt and freshly mowed grass that we pounded on. The traction and control was predictable and the buggy is quick in tight spaces and is easily handled in large fields. We’d love to see what a few upgrades will do to the TT-02B, but let’s save that for another time. 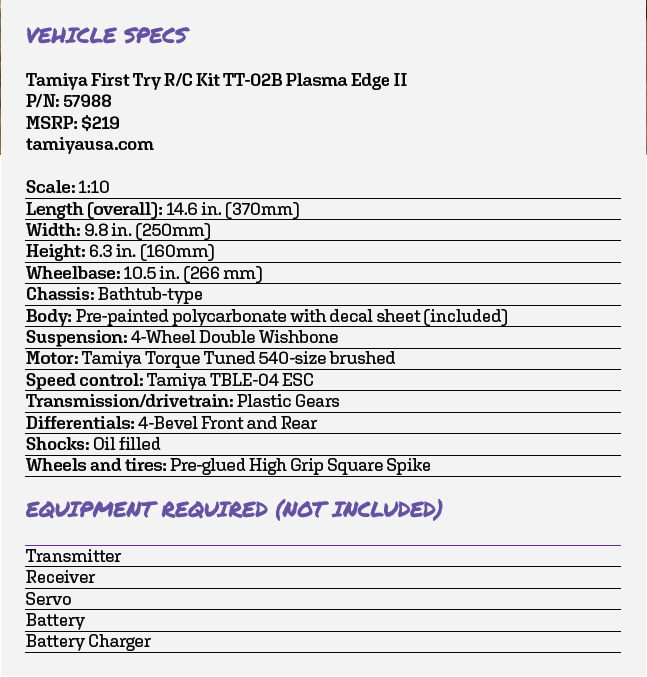 Whether you’re looking to build your 10th RC vehicle or are barely doing initial research for your first, we can’t think of any better company to ease you into RC kit building than Tamiya. In fact, for many in the RC industry, a Tamiya RC was the first kit they built when they themselves were only foundlings. This First Try R/C Kit really brings back the good memories of building our first kit those many years ago. The TT-02B Plasma Edge II First Try R/C Kit is made with beginners and younger builders in mind and we think they did a bang up job. Straddling the line between an RTR and a complete ground up assembly kit isn’t easy to do, but Tamiya pulled it off with this nice performing and sharp looking Plasma Edge II.