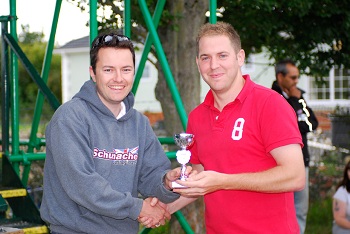 The penultimate round of the Schumacher BTCC series took place over this last weekend at Aldershot MCC. Once again another cracking entry of 140 drivers in this hugely popular series! With the focus on good fun and great competition for the drivers they keep coming back to each race.

Most of the highest level national competitors were in attendance as the race is just before the BRCA National in 2 weeks time. With the drivers hoping to get some good running on the excellent Sorex 32RY control tyre which has made the series once again very easy. Just bolt on and go fast!

The battle in modified was all about the Mi4CX of Chris Grainger and the Associated of Olly Jefferies, these two looking the class of the field as usual. Chris piloted his GM powered car to TQ in the end with Olly lining up second and Chris Kerswell third. The finals were mixed affairs and with both to count it means two consistent leg results are needed for the overall win. The Mi4CX won both legs of the finals, Matt White took the first after a coming together between Chris and Olly and Chris won the second. However with nothing to back them up, Olly took the overall win with 2 consistent second places with Jonny Aird second and Schumacher’s Chris Ashton 3rd.

The 10.5 Pro Stock class was all about James Hart and his Mi4CX. James comfortably TQ’ed with a dominant display ahead of the rest of the field, Andy Murray lined up second with Ryan Edwards third. James won the first leg of the finals convincingly but unfortunately his car for some reason didn’t get off the line in leg 2, getting swallowed by the pack. After an epic scrap Andy Low won the second leg but with nothing significant to back it up James and Andy came in third and fourth with Ryan Edwards taking the overall win with a fourth and 2nd!! Zack Smith came in second, tied on points with Ryan but qualifying higher. Just like in modified the finals format rewards the most consistent drivers over the two legs.

No such need for consistent results in the 13.5 class! TQ and two wins was all super fast local Ben Cane needed to pilot his Mi4CX to overall victory in dominant fashion. Ori Sohachevsky took second from second on the grid with another Mi4CX, that of Rob ‘slim shady’ West third overall.

All in all another great day of racing at the Aldershot club, some lucky guys went home with some great prizes from the Schumacher range but most went home with smiley faces after a good days running.

Thanks must go to the Aldershot club who put on an excellent meeting.

The final race of the championship is at Mendip to see who will be crowned the BTCC winners for 2011.