It is said that a “classic car” is aged somewhere between 15 to 20 years old. An antique car on the other hand is around 45 years or older. For this writer, it’s hard to fathom that the 1979 Ford Bronco is closing in on antique status. Maybe its because to me its hard edged good looks keep it from truly aging or perhaps I’m just showing my age. Regardless, these early SUVs are pioneers of the most popular vehicle segment in America today.

In fact after three decades after its last generation debuted, Ford recently released a new generation of Ford Bronco and it promises to be one of the most exciting SUV releases in recent memory. The 2021 Bronco not only looks great, but it seems like it’s going to give the venerable Jeep Wrangler a run for its money as America’s favorite off road crawler and overlander.

Although this still remains to be seen, we already know which crawler is the heavy favorite in the ultra competitive 1/10-scale RC crawler realm. The one and only Traxxas TRX4 platform is coveted for impressive out of the box capability, scale looks and driving prowess. This brings us to the featured 1979 Bronco you see here. Life started out very differently for this Bronco than you might think. It’s not an out of the box Traxxas TRX4 Bronco in the traditional sense. 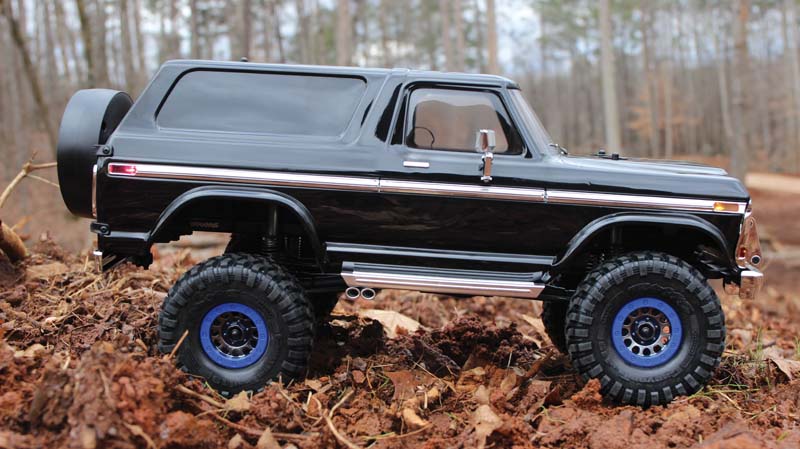 When RCCA Associate Publisher Leigh Guarnieri searched for a new RC project to dive into, he looked to his workbench for inspiration. Instead of doing what many of us are guilty of, that is looking for the latest and greatest RC release to pine after, Guarnieri dove head in to a large box he has stashed under his workspace. In it, are random parts pulled from RC vehicles and spare parts that he never had a use for. He decided to rummage through to see it he could “Frankenstein” anything together.

It didn’t take very long for him to see that he had almost enough parts to piece together a Traxxas TRX4. The story goes that he had a TRX Sport assembly kit at some point but needed parts off it for another project. After stripping the Sport, its remnants were relegated to the parts box. He pulled the Sport’s components back out of the box and examined what he needed to get it up and running.

Around this time, Guarnieri remembered that he needed a tow vehicle for a boat and trailer combo that he wanted to take to a family trip out to a nearby lake. The rebuilt TRX4 Sport would work out well for this task. He also figured that he would upgrade what he could with Traxxas’ factory upgrade and spare parts to create his very own “Bronco Sport.” Let’s hear about what he did to get the TRX4 running and with a classic Ford Bronco look too. 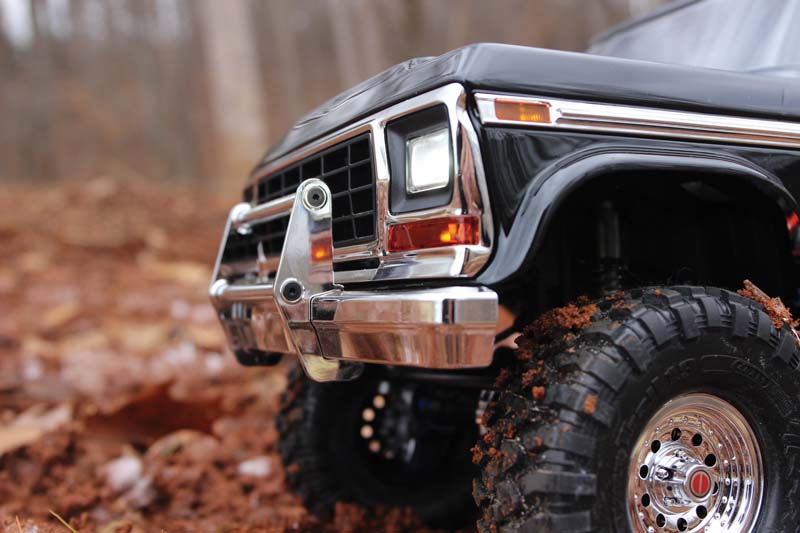 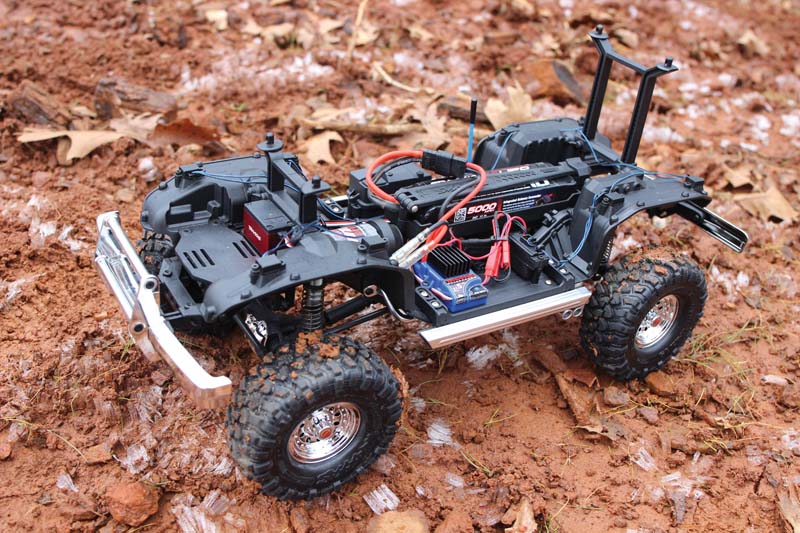 Guarnieri informs us, “The original TRX4 Bronco comes available as an RTR with two-speed gearing and locking diffs but the Bronco that is featured in this article was born out of being a ‘parts car’ build, which means that it was put together with spare parts and was not a RTR Bronco to begin with. The crawler actually started as a TRX4 Sport unassembled kit, which lacks the aforementioned two-speed gearing and locking diffs. Because it’s such a great deal at $300, I picked up the Sport kit to use its parts for other builds. Its clear body was donated to another build, as were some other parts that found their way to other builds as well.

“When I decided to turn the remainder of the Sport kit’s parts into a drivable TRX4, I also decided to install some Traxxas upgrade parts while I was at it. First I loaded it with Traxxas electronics including a XL-5HV 3s Electronic Speed Control and Titan 550 21-turn motor. I also installed a combination of a High-Torque 400 Red Brushless Digital Servo and metal steering horn for improved steering capability over stock TRX4’s. A high output BEC kit that includes a receiver box and protective water and dust seals completes the upgraded kit’s electronics suite.” Guarnieri also mentioned that the vehicle is powered by a Traxxas 5000mAh 11.1v 3-Cell 25C LiPo Battery.

“The major difference between the TRX4 Bronco RTR and this Sport kit is that the Sport does not have locking differentials and a switchable high and low gear transmission. It’s a lighter chassis that still has the provisions for those features to be added in the future if desired.” Guarnieri points out. 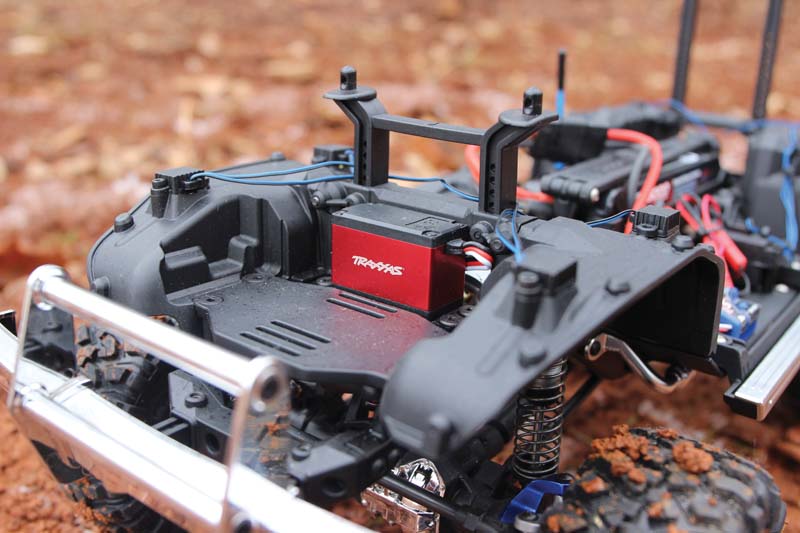 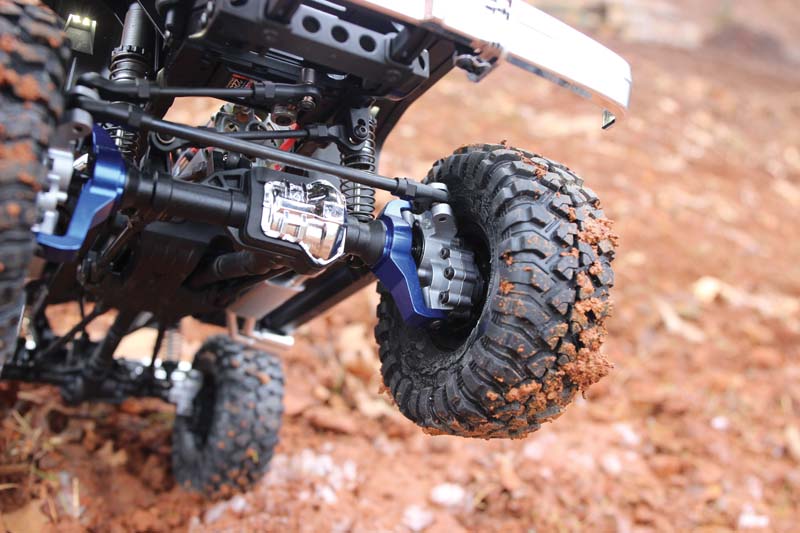 He continues, “I completed my Bronco Sport with a pair of blue-anodized 6061-T6 aluminum caster blocks and portal axle parts that include aluminum portal housings, a rear portal drive axle mount, and extended stub axle. I actually run two different types of wheels on this build. The classic 1.9” chrome set gives the Bronco a period correct look while the latest Method 105 1.9” blue beadlock style wheels have a good looking updated look to them. Both sets of wheels ride on Traxxas Canyon Trail 4.6” x 1.9” tires.

“To give the Sport a new identity, I opted for Traxxas’ incredibly detailed 1979 Ford Bronco body. I love the nostalgic 70s look of the body and its incredible details. It has a great looking injection-molded chrome grille, door handles, side mirrors, windshield wipers and other chrome trim highlights. This thing is a scale detail beast. I like adding small details to my builds when possible such as the left and right side side-exhaust tips that I added to the Bronco. I also upgraded the diff covers with period-correct chrome-plated versions.

“The final details to my Bronco Sport build were the addition of a couple of Traxxas LED light kits. I installed the TRX4 1979 Bronco Light Kit as well as the TRX4/TRX6 LED rock light kit. I really think the addition of lights gives RC cars and trucks such a realistic look. They really make the vehicle come alive.” 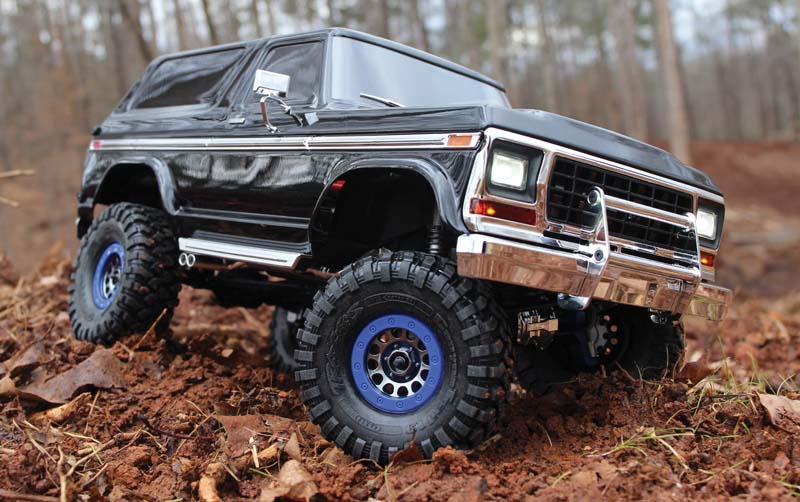 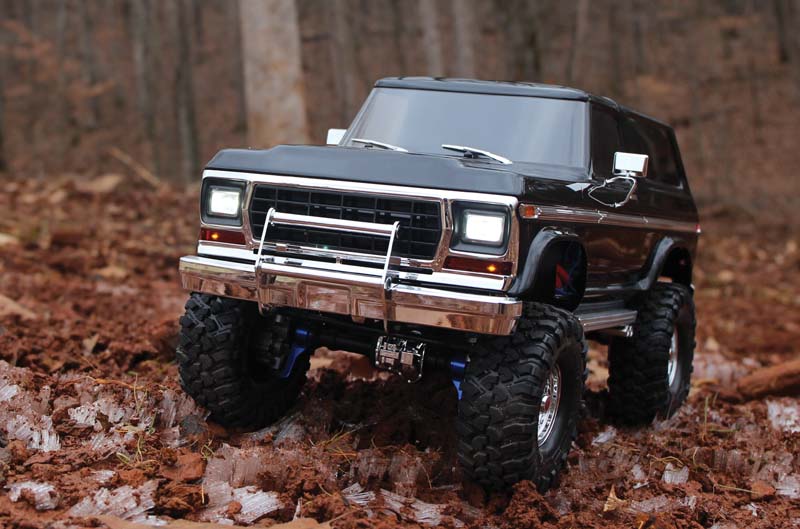 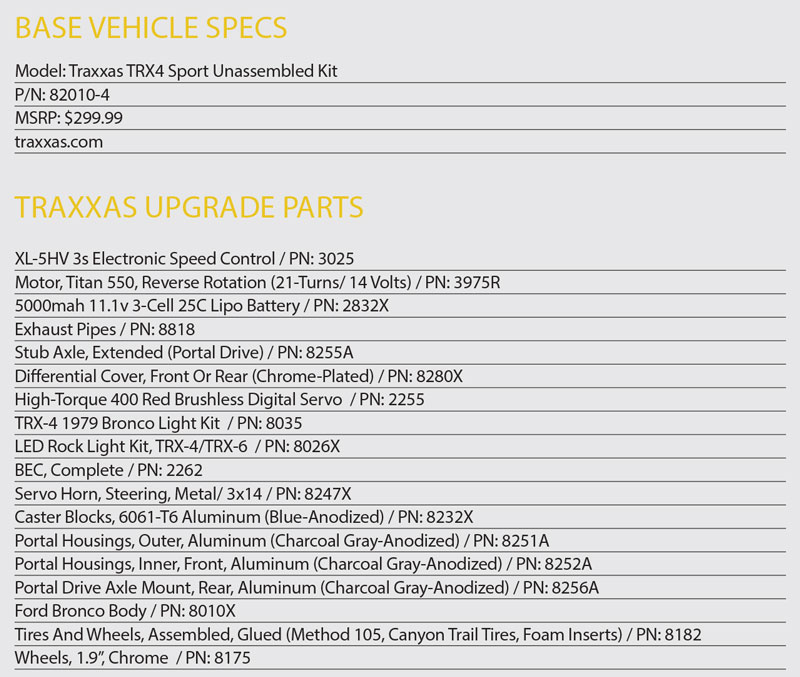 For a pieced together parts truck, this classic looking, borderline “antique” 1979 Bronco is quite the looker. Perhaps it doesn’t have all the capability that a full-blown TRX4 Bronco RTR does, but it functions perfectly as intended. As for his trip to the lake, Guarnieri