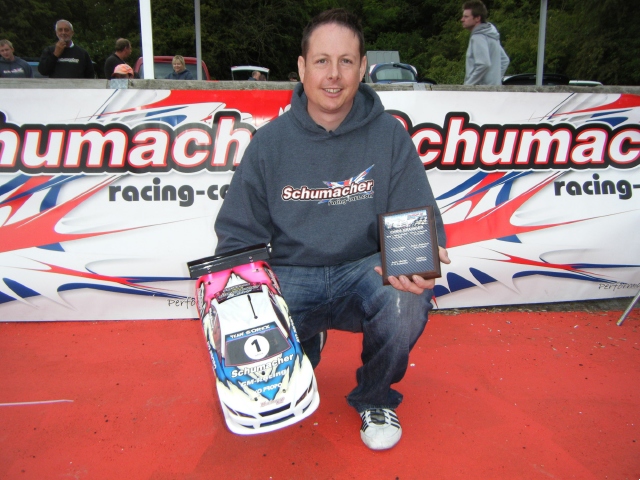 The first round of the highly anticipated BRCA Touring Car Nationals took place this last weekend with the Schumacher Team present and Chris Grainger trying to once again repeat his British Championship winning ways again with the Mi4CX.

The West London circuit was looking in fine fettle as the club have spent a lot of time and money over the winter improving the facilities, including a complete re-surface of the track. The new surface provided excellent traction however getting clean runs provided difficult even for the best drivers in the country.

In the Pro Stock Class 3 drivers battled for the TQ position, Ayrton Anderson, Schumacher’s James Hart and last year’s champion Jon Bowden. In the end Ayrton nailed it down with a pretty dominant set of qualifying results and Jon would line up ahead of James’s Mi4CX on the grid.

The first modified A final saw Chris manage to stay ahead of the fast charging pack all of who were making small errors, Elliot pushed very strongly at the end but could not find a way past. The second final saw major drama for Chris at the mid-way point when his car suddenly stopped while leading. It was later traced to his 2.4ghz system in his radio switching off for some reason. Elliot took the win in that leg, setting it up for the decider in leg 3.

Just as in qualifying and the first leg Chris controlled the lead from the start and took leg 3 victory from former World Champ Andy Moore to wrap up a fantastic first National win for the season.

In the Pro Stock A finals there was no catching Ayrton Anderson this weekend, but Schumacher’s James Hart took overall second place improving on his grip position with a solid set of finals.

Overall a fantastic weekend for the team with 3 cars in the Modified final with Chris, Matt White and Paul Pinkney and 3 cars in the Pro Stock A final, James, Sam Clifton and Darren Lee. The next round moves onto the Cotswolds track next month.

Congratulations to all the drivers.