Desert racing is perhaps one of the harshest types of racing there is. The arid terrain is rough and unpredictable and the speeds that desert racing trucks tackle the racecourse is breathtakingly fast. Precise driving coupled with some of the best engineered off road vehicles in the world are required for success in this highly competitive environment.

Losi, armed with years of off road RC experience, replicates the excitement of high-speed desert racing with its Super Baja Rey 2.0 desert truck. The latest in a line of competitive desert racers, the updated 2.0 version of the Super Baja Rey (SBR) represents the culmination of everything that the engineers at Losi have learned, all packaged up into a giant 1/6-scale ready to run kit. The SBR 2.0 is available in two officially licensed trims, a yellow Brenthel Racing version and a blue King Shocks version. Join us as we take a closer look at the King Shocks variant. 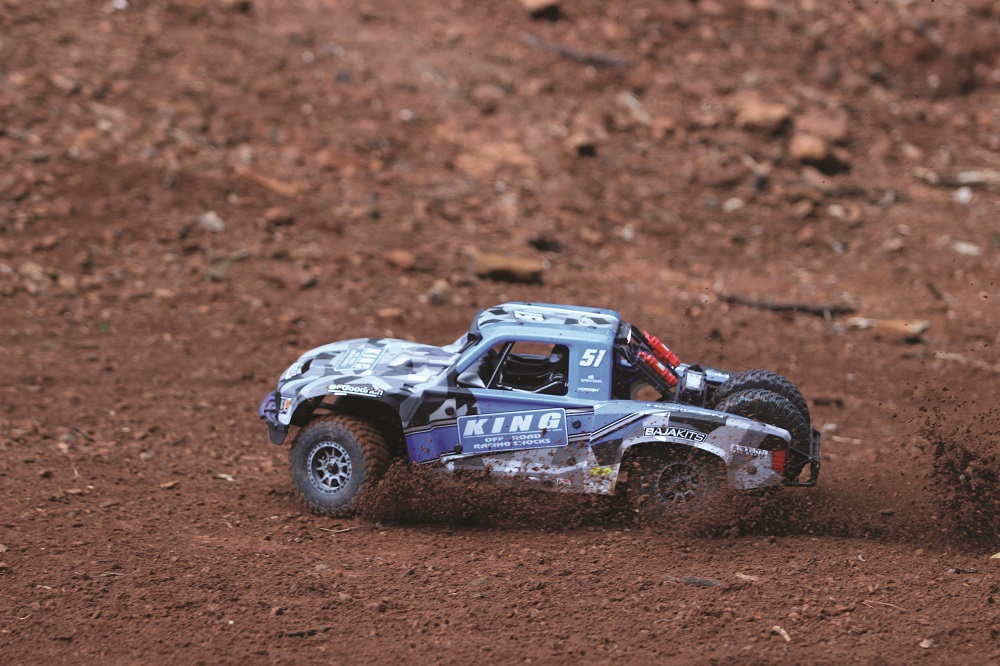 Our first observations are that the truck is big… really big and it looks seriously scale. At nearly three-feet long, the 1/6-scale truck tips the scales at almost 22-pounds and is well over a foot wide. Appearance wise, the SBR 2.0 sports a detailed trophy truck body with an accurate racing livery. In fact, Losi replicated Brenthel Racing’s truck body with absolute accuracy. This replicated body isn’t only for looks, its bodylines and structure, like the one on the real truck, make it stiff and capable of shrugging off close encounters with desert elements.

This King Shocks version of the SBR 2.0 is graced with the same racing colors and sponsor decals that you’d find on the real 1:1 truck. Losi also made sure that the SBR 2.0 came ready to take on desert running, day or night by including LED light bars in the front and rear. Adding to the scale look is a set of officially licensed Method Racing Beadlock Wheels and BFGoodrich Mud-Terrain T/A KM3 tires on all four corners. Beyond the tires on the truck itself, SBR 2.0 comes equipped with functional dual spare tires that are tucked away in the rear too. 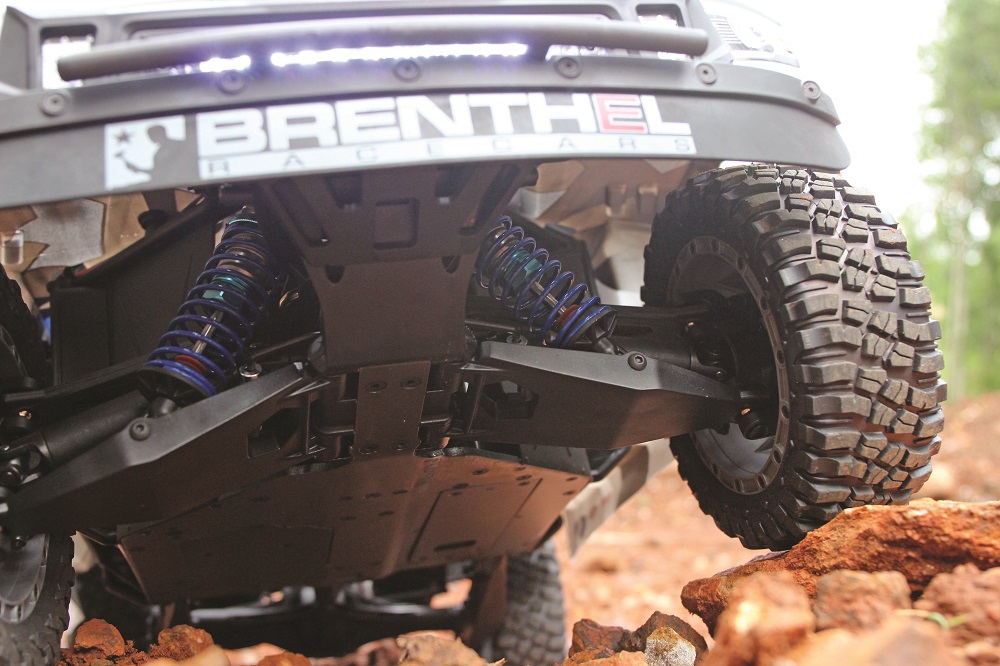 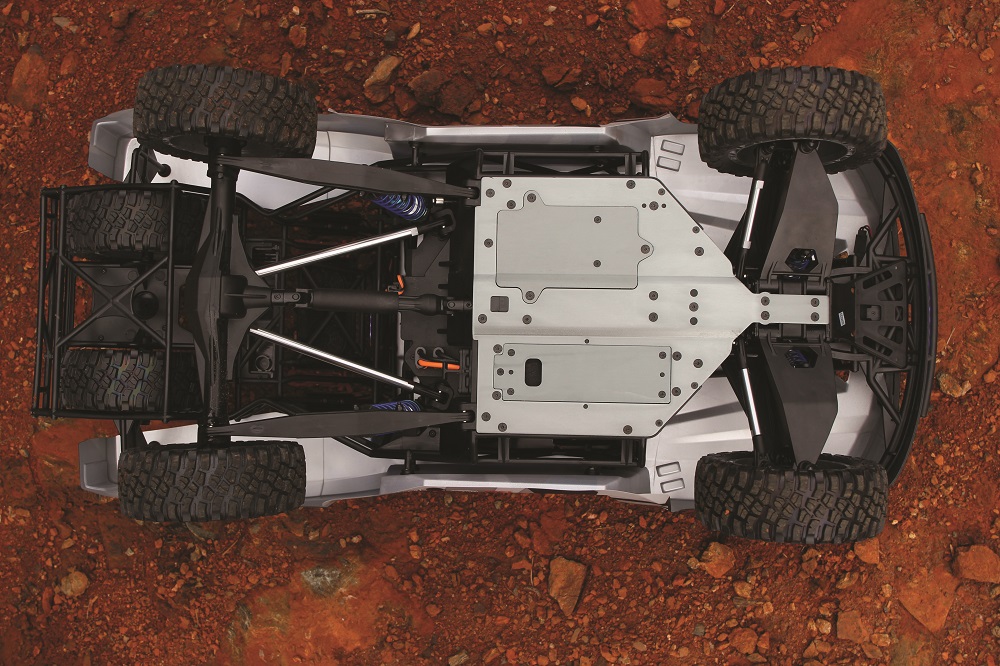 Also just like the 1:1 desert trucks, the Super Baja Rey 2.0 comes with a super-rigid roll cage made of super-tough composite material that enhances the truck’s scale looks and durability. It isn’t only there for looks; it’s functional too by being integrated with a tough 4mm anodized aluminum chassis plate. We’ll come back to this a little bit later. Right now, we want to talk scale details. You also get a molded interior that includes a driver and co-driver, both of which sport racing helmets and harness details. If that wasn’t enough, Losi also includes more scale detail accents like fire extinguishers, shock reservoirs, cooling fans and a floor jack. What other RTR comes with a floor jack? Simply amazing.

Moving beyond its looks, we dove head deep into the nuts and bolts of the truck. We discovered that Losi based the SBR 2.0 on the Super Rock Rey chassis but elongated its wheelbase by about an inch. They then morphed it with the front end from the Super Baja Rey to form what we see here, the SBR 2.0. This foundation consists of a 4mm, anodized aluminum chassis plate with a 4mm upper deck. For added durability and performance, a realistic roll cage made of super-tough composite material was integrated into the chassis.

The truck’s front suspension arms have been redesigned to accommodate slider style front axles. This allows the driver to run more suspension travel for even the roughest terrain. The SBR 2.0 has sports longer trailing arms in the rear that allow it to soak up massive whoops and bumps with the same realistic handling and movement of a full-scale desert truck. These longer rear trailing arms increase the wheelbase in order to add stability over rough terrain at high speeds. Desert racing is notable for its loose terrain, this suspension upgrade gives you better control and a more locked-in driving feel even on the most unpredictable of surfaces.

King Shocks are sought after by race truck builders in the 1:1 world for its performance prowess. This is much the same in the RC world. King Shocks long travel coil-over oil filled shocks with bump stops are fitted to the SBR 2.0 so that it can absorb hard pack, whoops, small rollers and giant kickers with ease and speed.

SBR 2.0 is endowed with amazing traction thanks to full-time four-wheel drive. Its front, center and rear differentials can be tuned, which allows the adjustment of the power bleed between the front and rear drivetrain. The truck’s tunable differentials allow the driver to dial in the truck for maximum performance and traction.

Propelling this 1/6th scale truck is a duet of a powerful brushless Spektrum Firma 4-Pole 750Kv 5867 Motor and a Spektrum Firma Smart 8S Waterproof ESC. The motor is capable of taking the 22-pound SBR 2.0 up to a real world 50 miles-per-hour while running on 8S LiPos. The Firma Smart ESC not only regulates power, but acts as a virtual engineer as well. It provides a direct path to the vital operating data for the driver to reach peak performance. 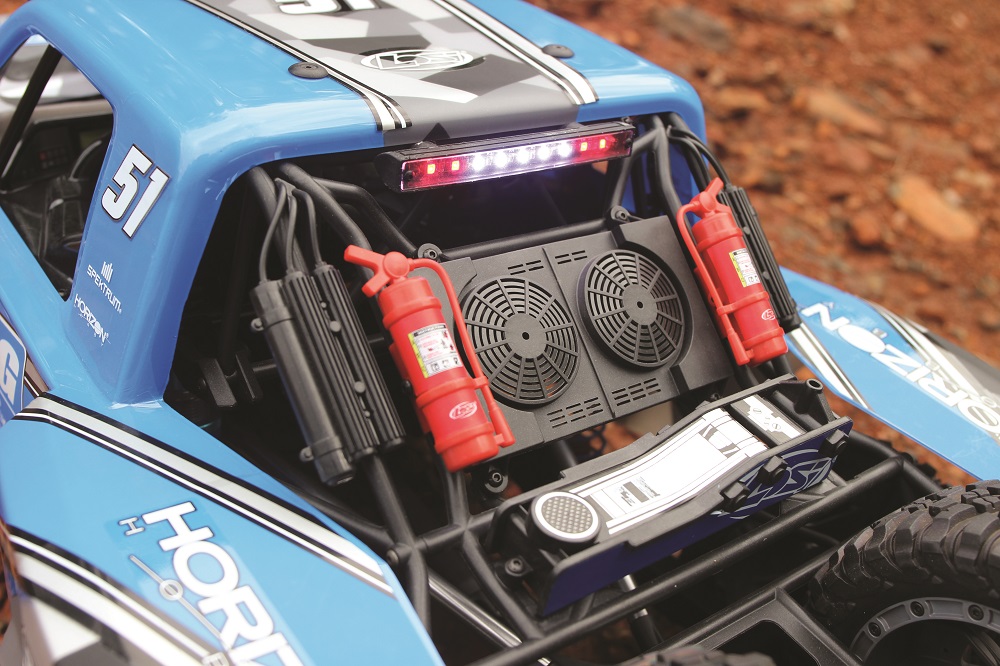 Just some of SBR 2.0’s many scale details include fire extinguishers, shock reservoirs, cooling fans and a floor jack. What other RTR comes with a floor jack? We love it. 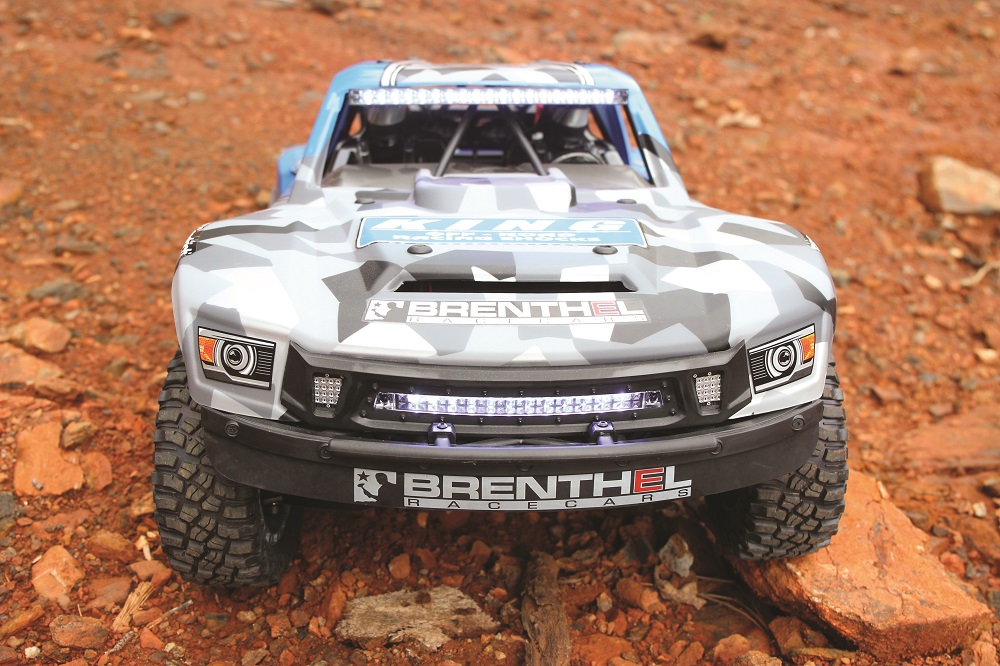 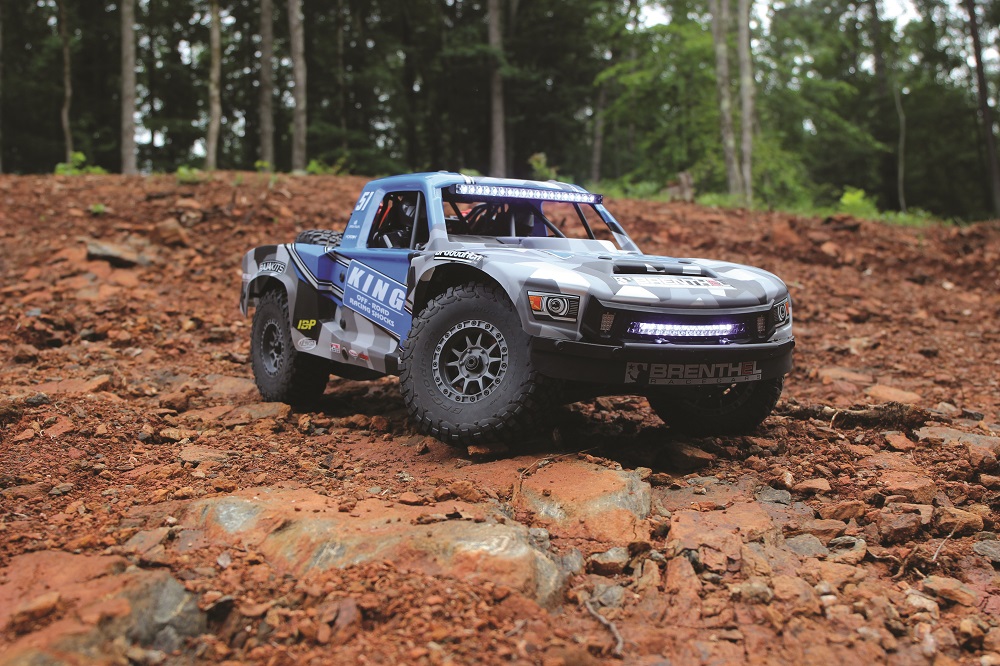 This RTR kit comes with a dependable Spektrum DX3 three-channel radio system with 6100AT AVC receiver. This transmitter and receiver combo offers advanced features like Active Vehicle Control (AVC), a 3-position throttle-limiting switch and travel adjust. Let’s talk about AVC for a minute. How does the SBR 2.0 put down so much power and yet stay controllable?

The answer is the receiver’s built-in AVC traction control system. AVC works behind the scenes, making hundreds of throttle and steering adjustments per second, so more of the motor’s power is translated into ballistic speed and acceleration instead of just flying dirt and spinouts. Similar to the traction control in your full-scale vehicle, you can activate or deactivate the system on the fly and adjust the level of stability based on driving conditions.

A large truck like the SBR 2.0 demands a large and powerful steering servo. Here, the Spektrum team provides the SBR 2.0 with the new Spektrum S905 HV large scale waterproof servo. Boasting massive torque, this servo is the perfect component to keeps the desert racer pointed in the right direction.

We took our King Shocks SBR 2.0 to a local park for a simulated desert run. After charging up a couple of Spektrum 5000mAh 4S hardcase LiPos, we plugged in and steadied ourselves for what was to come. For ease of battery changes, Losi chose to make the batteries bottom loading from the chassis. We really liked this feature.

We realize that the SBR 2.0 is a big truck but once powered up, it was immediately clear that it is also capable of big-time performance. For the SBR 2.0 to soak up bumpy terrain with its scale King Shocks was a given, but gliding over the rough stuff at the speed the 8S power set up delivered made it all the more impressive. 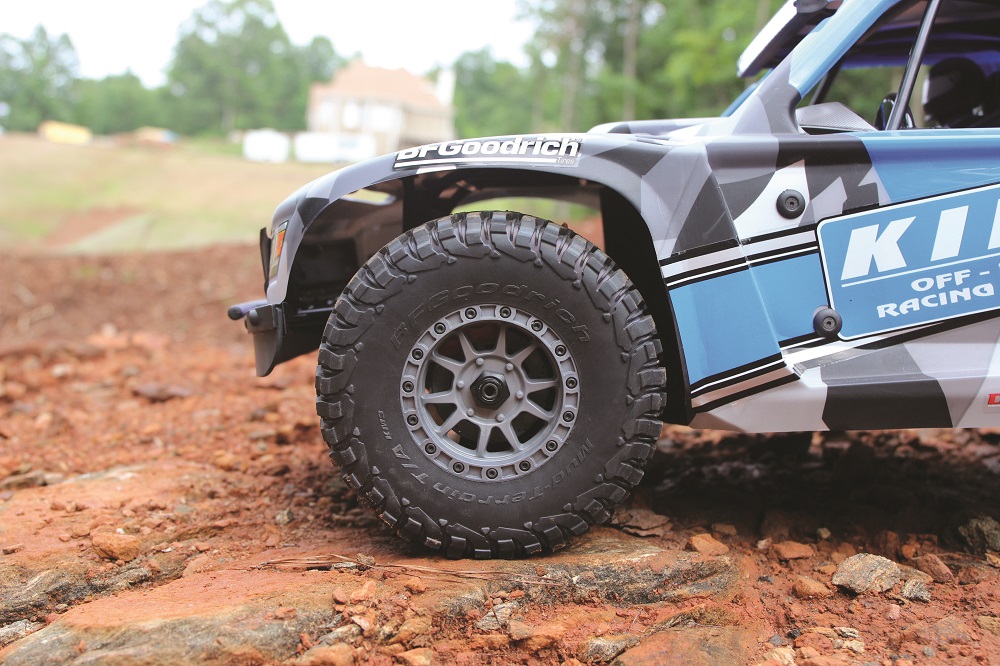 Due to the area we were in, we didn’t quite get up to the maximum speed but it feels like we did get close to it several times. We took precautions since bystanders were in the area and we didn’t want any accidents. That said, the SBR 2.0 was an admirable performer doing everything we asked of it and more. It just looked so cool and realistic romping around the dirt terrain. 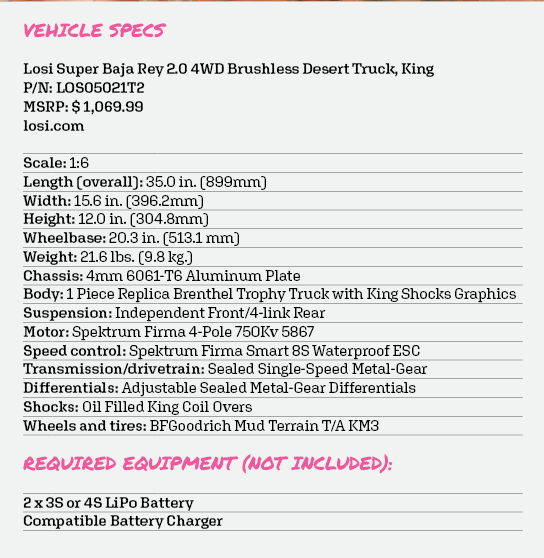 What can we say about the second coming of the already popular SBR? To put it mildly, Losi’s Super Baja Rey 2.0 delivers in a big way. Big size, big personality, big speed, big time scale details, this thing is big in more ways than one and we’re loving it. If you’re in the market for a desert racing truck but don’t have the space for a 1:1 version, the Super Baja Rey 2.0 could be the next best thing.