There are RC cars that are customized and made to look badass, and there are cars that are inherently bad to the bone without any extra effort. The Arrma Felony sits in the latter category. Its extra-large 1/7-scale gives the Felony a size advantage when compared to most other road going electric cars and then there’s its mean looking body and stance. It looks like something Mad Max would drive to ward off crazed biker gangs doesn’t it? It’s not modified to look this way, this is how it comes out of the box and we absolutely love it.

Inspired by the muscle cars of the 60s and 70s era, Felony backs up its looks with a powerful Arrma brushless motor that is capable of propelling the car to 80 miles per hour right out of the box. It comes pre-assembled and painted and ready to go. The multi-part, undercut muscle car body design with an aerodynamically adjustable wing delivers standout style. 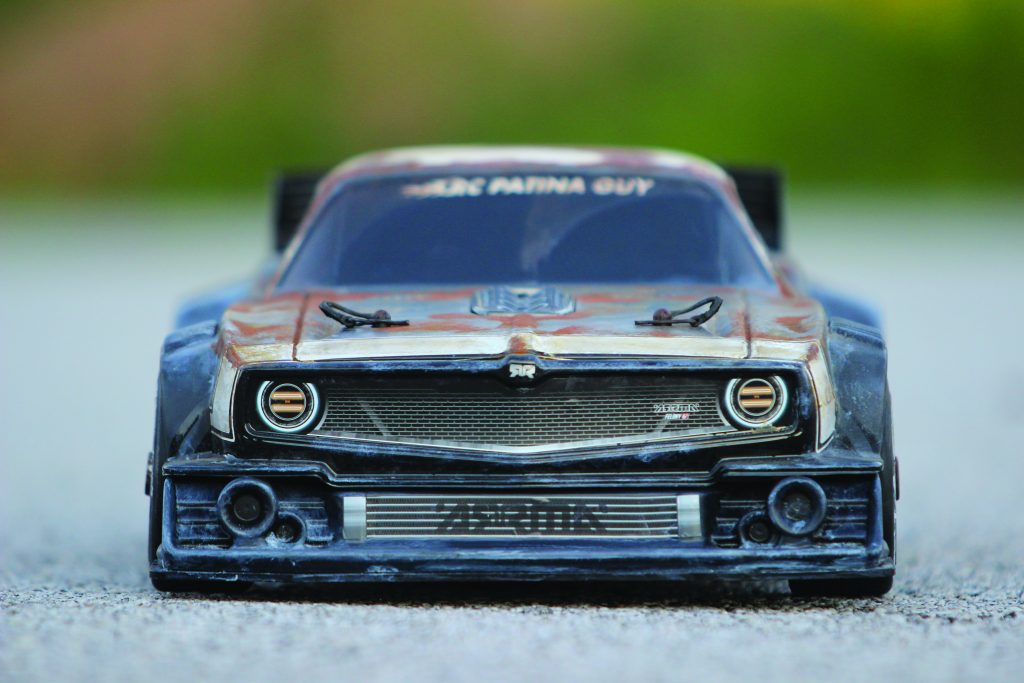 Other key features of this ready to run basher include a Spektrum 3-Channel DX3 2.4GHz DSMR radio, a Spektrum SR6110AT Receiver that is equipped with Active Vehicle Control, a Spektrum Firma 150A Smart ESC as well as dBoots Hoons all-road tires that are mounted on realistic 5-spoke wheels. The only thing you need that isn’t included are batteries and a compatible charger.
Under the body is a 6061-T6 anodized aluminum chassis that houses a heavy-duty drivetrain with steel driveshafts. Felony is equipped with all-metal diff outdrives and gearbox internals, which is reinforced with a center chassis brace. The car’s adjustable, oil-filled, anodized aluminum shocks are mounted on strong, black-anodized aluminum shock towers for stiff and responsive driving feel. 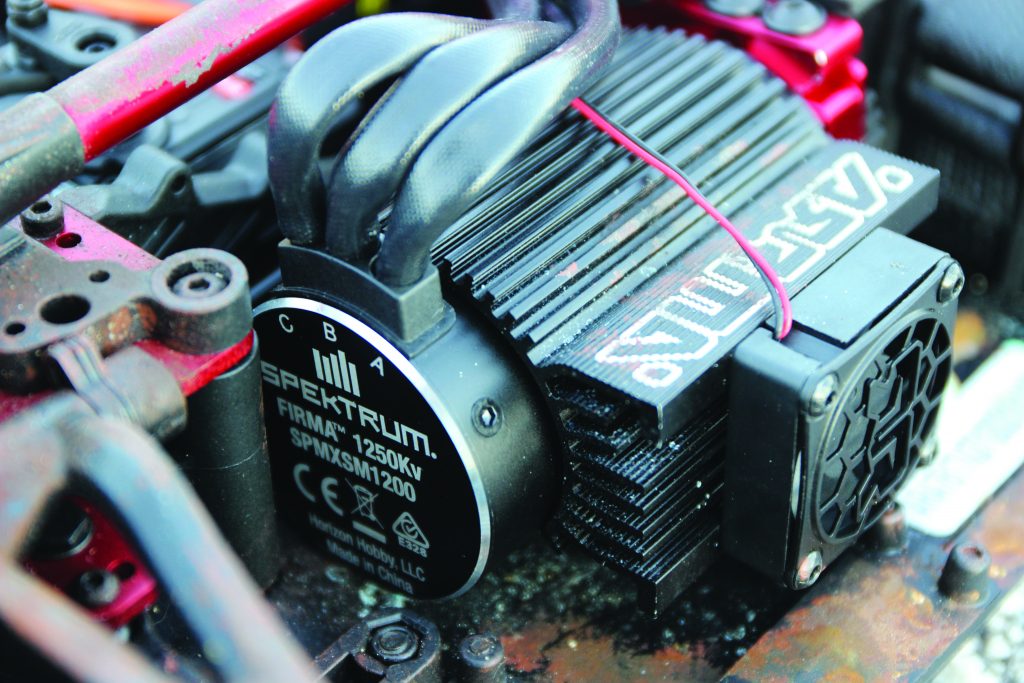 We swapped out the stock motor in favor of a Firma 1250Kv brushless motor so we could go really really, really fast. 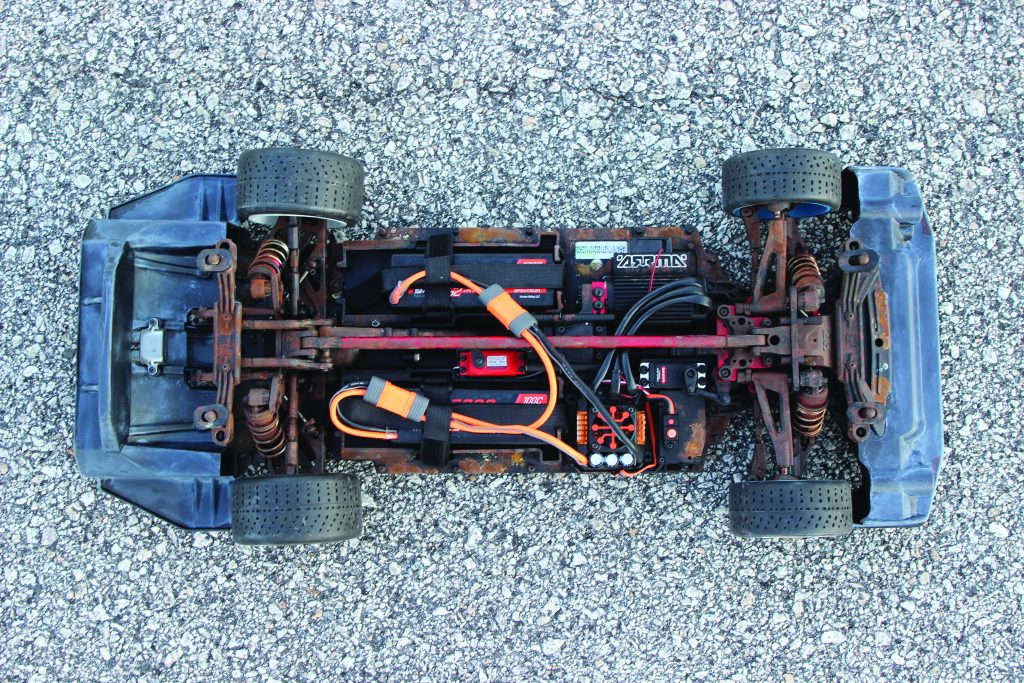 Under the body is a 6061-T6 anodized aluminum chassis that houses a heavy-duty drivetrain with steel driveshafts.

Since the Felony has the look and feel of an older muscle car, possibly an ex-racecar that has been forgotten we took a bit of a different approach to this build. Traditionally racecars have two criteria, they need to look good and have the power to back up all that shine.
Our Felony used to have that shiny showroom look until Erick Padilla owner of RC Patina got ahold of it and proceeded to make it look like it had won its final grudge race and was then parked in a field to rust away its remaining years. 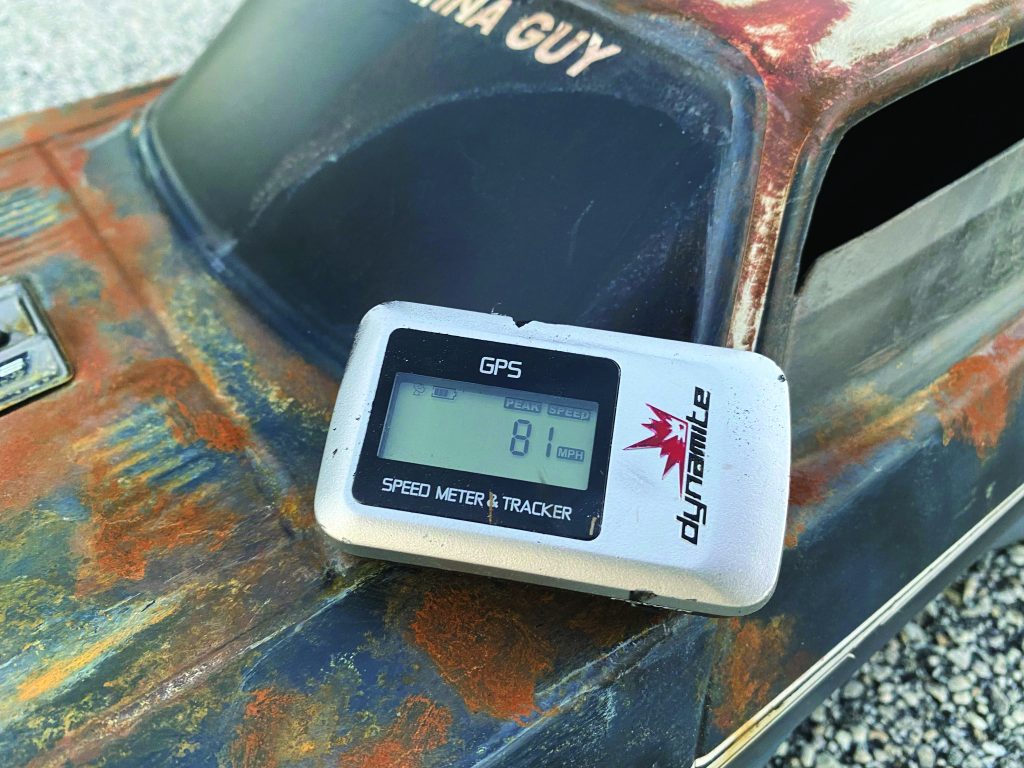 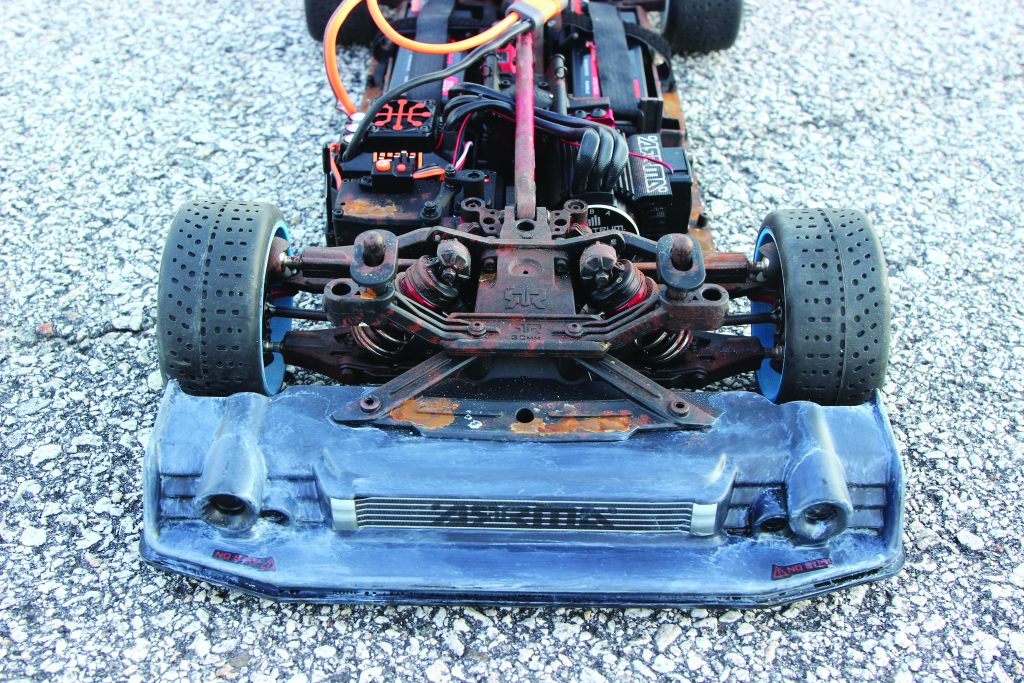 The inspiration for the build comes mostly from a picture we saw of a ‘68 Camaro that has a racing stripe and some rally wheels on it. We wanted to replicate that look, only make it looks like a barn find too. Making the body and chassis look old and rusty is an art form that comes easy to Erick but he isn’t about to give away all his secrets.
When you see what he’s done to the Felony, you almost don’t want to touch it. That’s mainly because you don’t remember when you had your last tetanus shot, the rust looks and feels like actual rust and its strategically done the same way you would expect to see a car out in the elements get rusted out, complete with tattered roof, worn tires, dirty scratched up windows and overall neglect.
The Felony comes with a nice 5-spoke wheel and they work great for the bashing we were going to do, but to go a step further with the build, Erick had a set of Rally wheels and center caps designed that would really set the car apart. The design took a few tries to get correct but with the help of a 3D printer, we were able to mock up several sets and then finally have Clay at Real Sticky make us a set with his Formlabs Resin printer.
42 hours of printing later, we had a beautiful set of scale looking rally wheels. Off to RC Patina they went and within a couple hours, the brand new wheels looked as damaged and neglected as the rest of the Felony, which in our case was perfect. Erick even added some BF Goodrich decals to the sidewall for some extra scale realism. Erick worked his magic on the chassis as well so everything flowed together naturally, the metal parts got the rusty patina and the plastic parts got some nice, simulated sun damage. 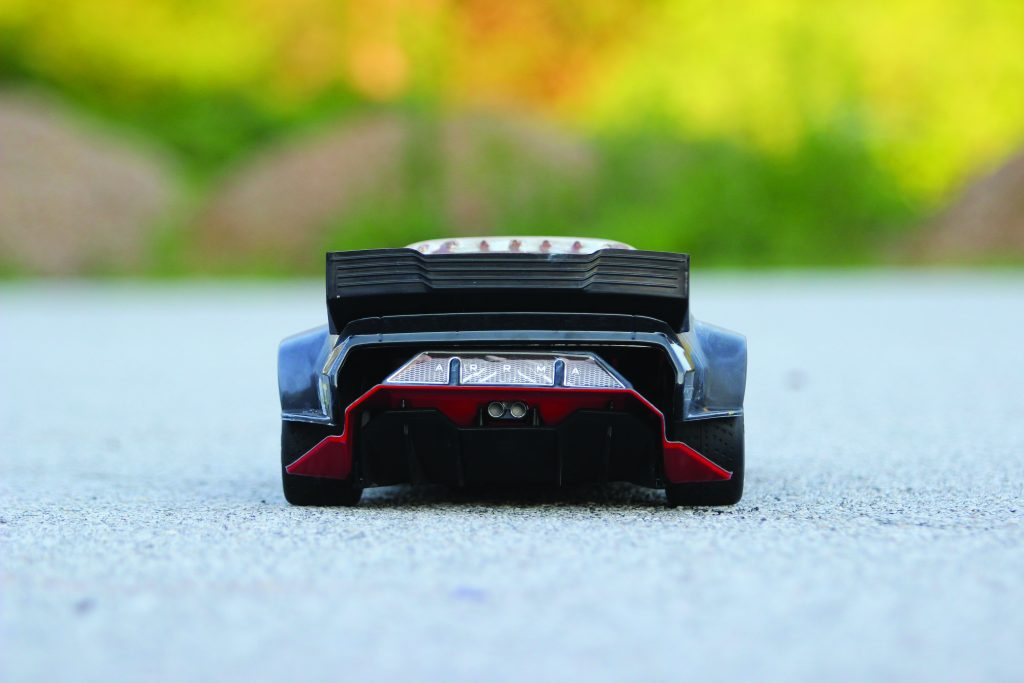 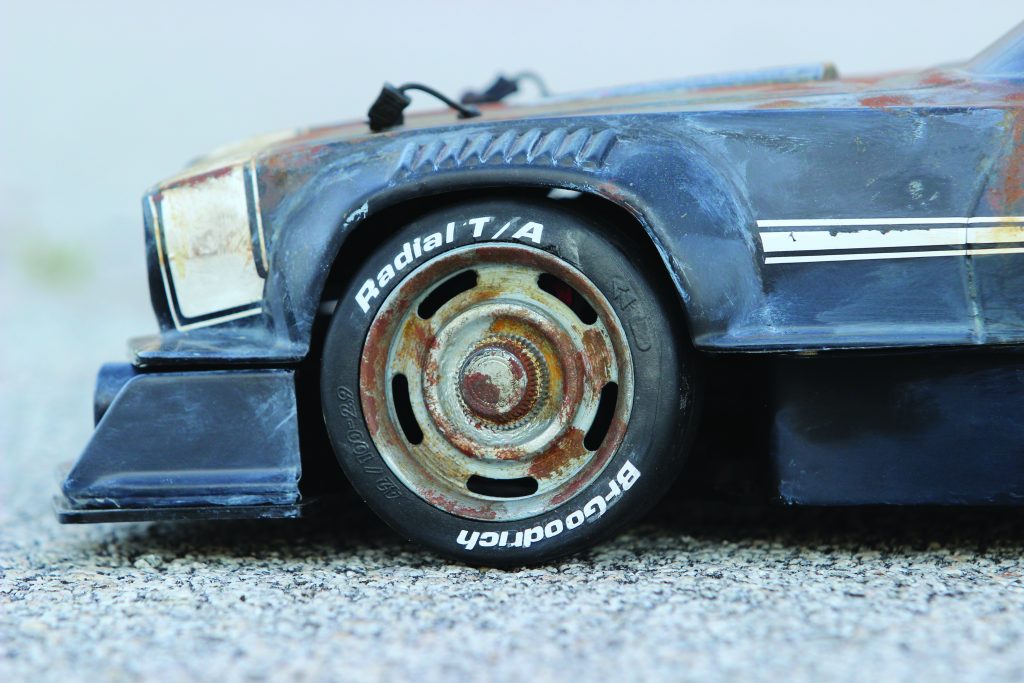 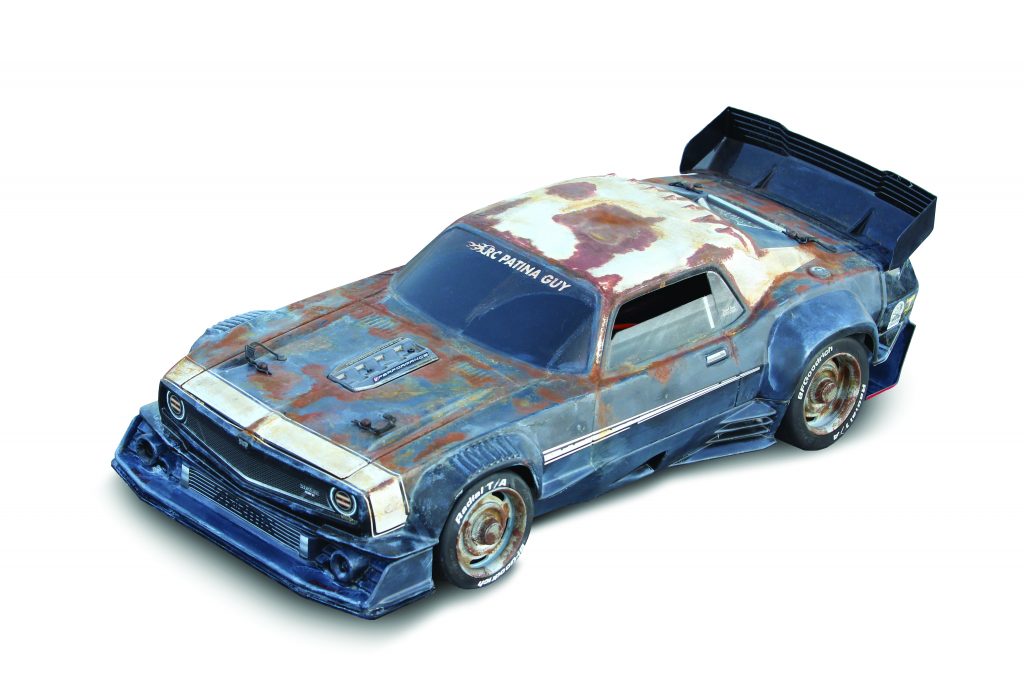 …the metal parts got the rusty patina and the plastic parts got some nice, simulated sun damage.

With the appearance portion of this project done, it was time to focus on some power that would be worthy of this neglected racecar. The stock electronics are 6S capable and more than you need to go really fast, so we yanked them out in lieu of a Firma 160A Brushless Smart ESC that is 8S capable. Yes, were going for power overkill. We also installed a Firma 1250Kv brushless motor so we could go really really, really fast. Being from the Spektrum family of products, everything installed easily and looked at home. A quick tweak of the stock motor fan let us use it on the bigger motor to keep things cool. We installed a S6250 Standard Digital HV high torque metal gear waterproof surface servo for steering and reused the stock Felony steering servo for its optional handbrake module. 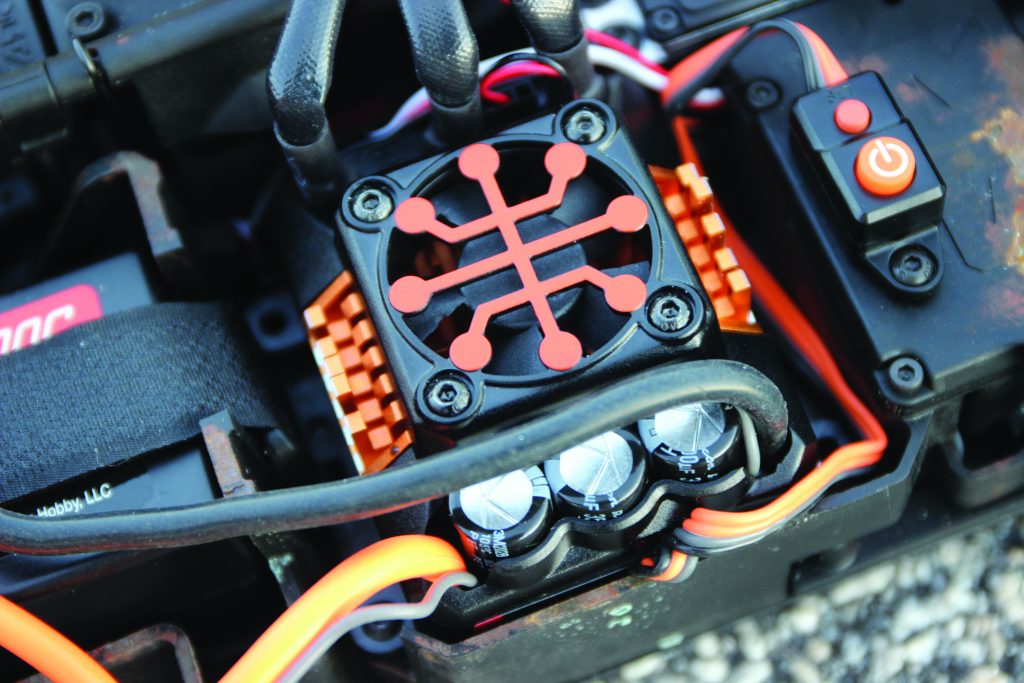 To bring more power to bare, we installed an 8S capable Firma 160A Brushless Smart ESC. 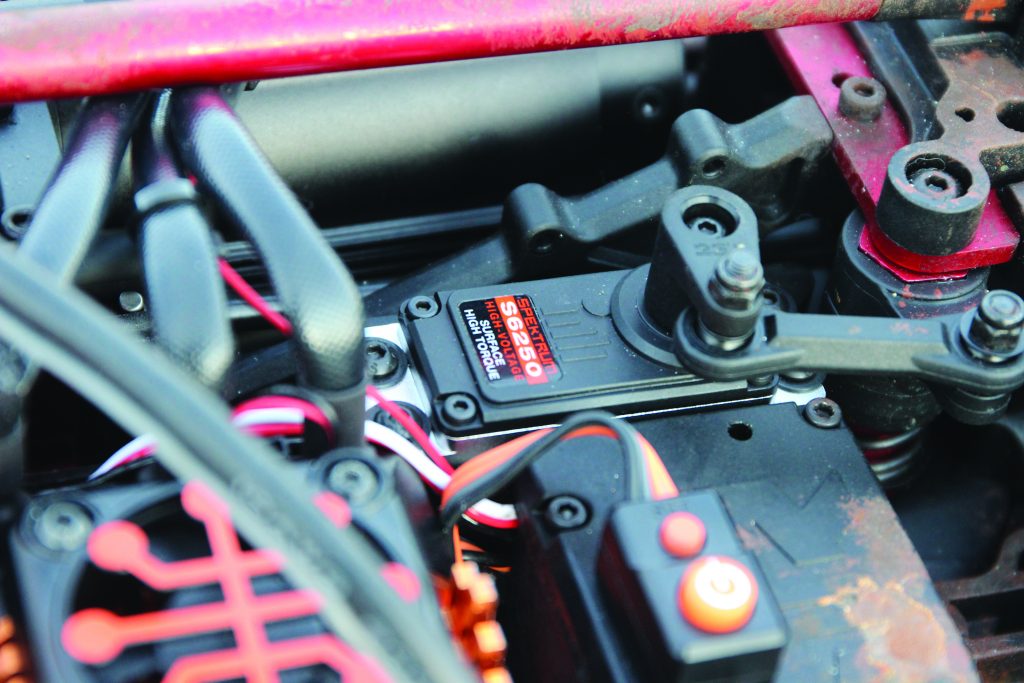 A 22t pinion gear was added just before we took it out for a run on 6S power to get a feel for the car. Surprisingly, we got it up to 81mph in the local parking lot before running out of space. Since we were space limited but wanted to push the Felony a bit more, we installed the optional 27t pinion (supplied with the Felony) and bumped up to 8S batteries.
8S was faster for sure but the thing to note is that it got to speed quicker in a shorter span. We checked our GPS and 81mph was the peak speed we could get before having to back off. Given more space and a smaller spur gear, we see how easy it would be to do well over 100mph which is nuts. 81 mph is already violent fast and all you see is a blur of awesomeness as it rips by you spitting out sparks from its underside. 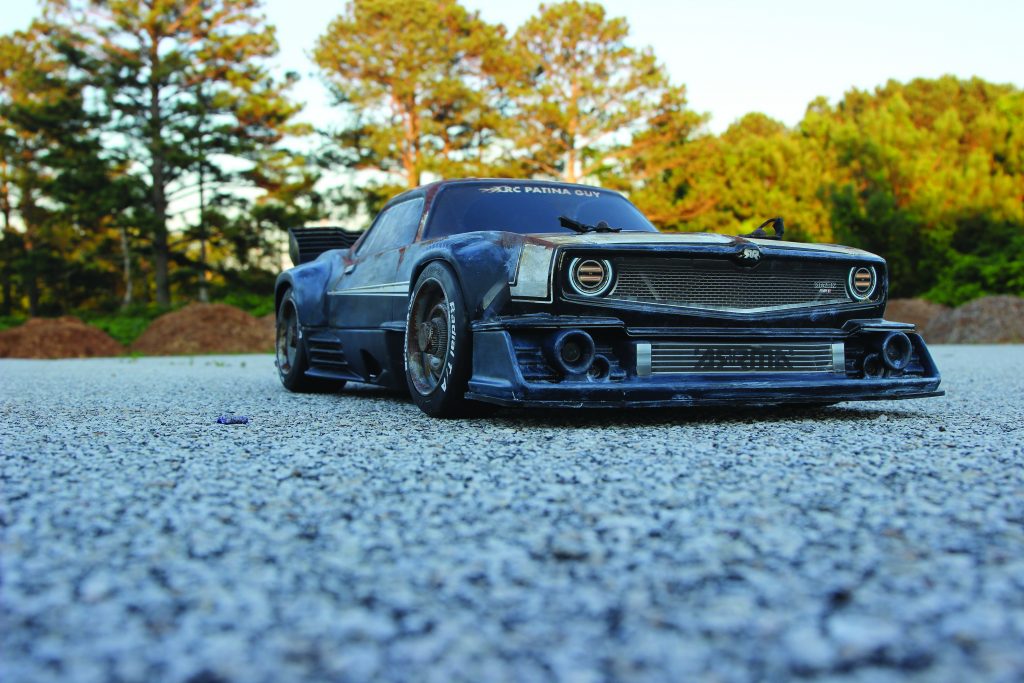 We checked our GPS and 81mph
was the peak speed we could get before having to back off.

Old rusty is definitely much quicker and meaner than its patina’d body makes it look. After doing an afternoon of speed runs, we officially have been bitten by the speed run bug. We figure, with only a few upgrades, we think that breaking into 100+mph club will be an easy task for this car. Knowing that the Felony comes straight out the box as an RTR is seriously amazing. 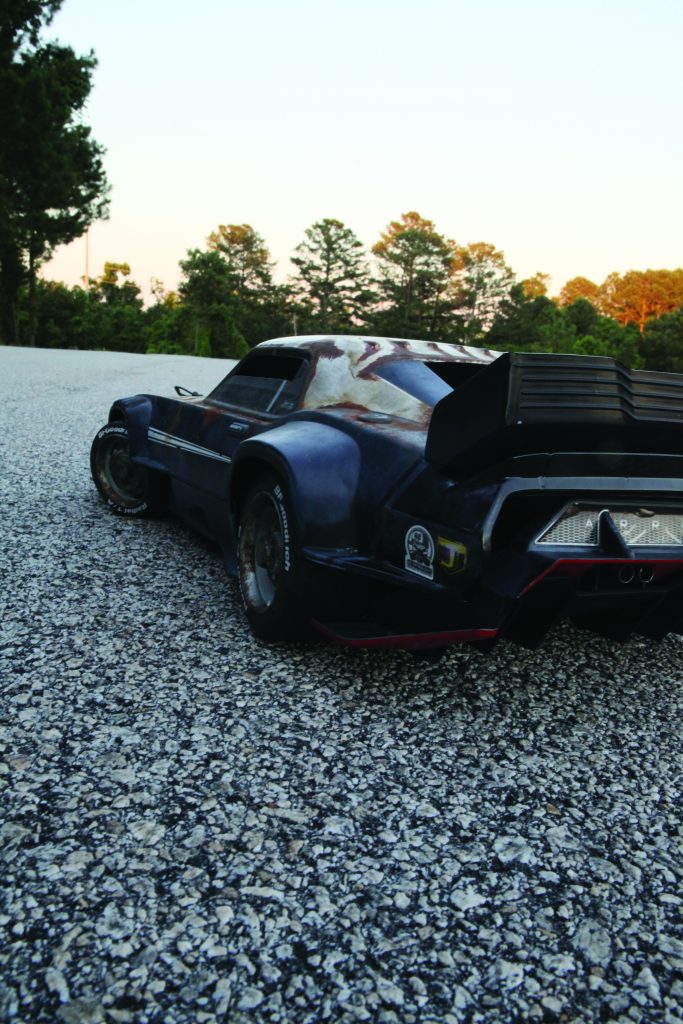 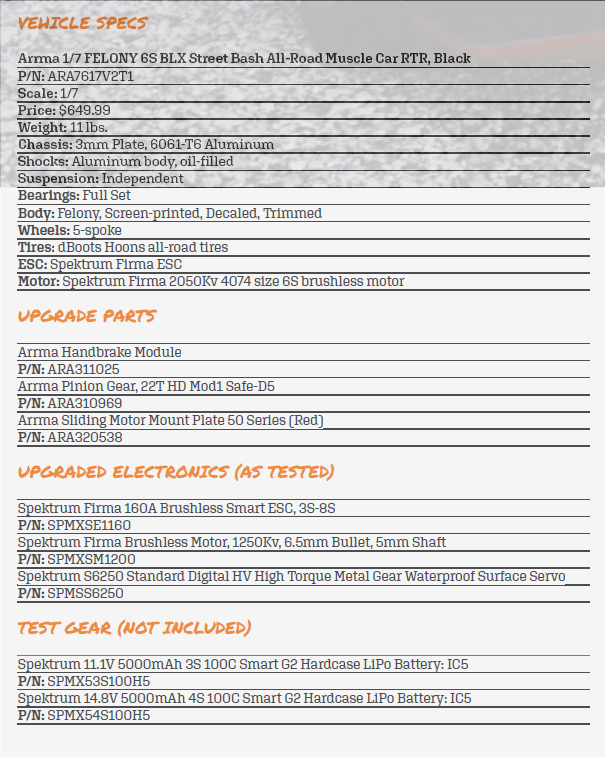