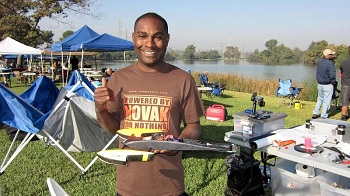 With a custom built carbon fiber hydroplane (rigger) Bill went a blistering speed of 74mph getting a 2-way average of 71.656mph on 1-cell using Venom’s 5000 50c 1s packs! The previous record was 59mph and 74mph is the fastest recorded pass on 1-cell lipo the world over. Bill then used the same boat to obliterate the stock (17.5) hydro record at a whopping speed of 56.744mph with a high pass of 58.9mph!

The water was phenomenal all weekend long at Legg lake which is known for its glassy water all day and this event was no different. There was also amazing food, flawless timing equipment, and a wonderful atmosphere which made for a great race.

“The Very best, most reliable cells available are crucial to breaking world records. My Venom packs perform strong and consistent run after run. It takes only the best to be number one. And with the introduction of Novak’s X-drive my boats woke up like no other, but the introduction of “super tuner” in the pulse allows me to zap out like a guided missile”

If you like this article, check out this additional article on Novak.