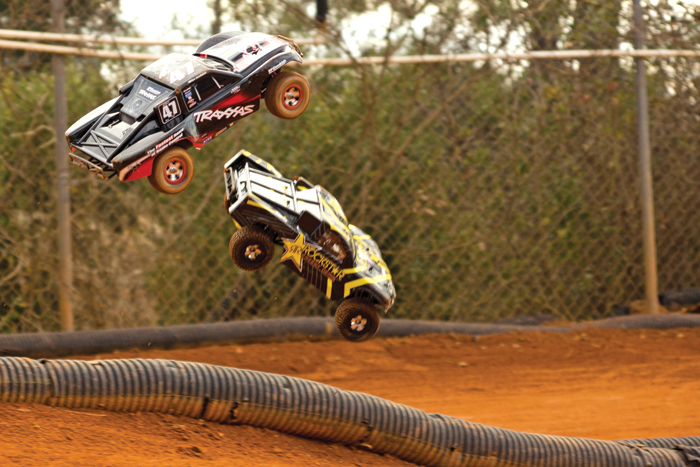 When people think short course, they are usually talking about 1/10 scale, if not 1/8, or even 1/5 scale, but there is another breed of SCT that can be just as exciting to drive.  The 1/16- and 1/18-scale minis are small, light and fast, but requires a little bit of different tuning philosophy than their bigger cousins.  I took the 4WD Traxxas Mini Slash and the 2WD Losi Mini SCT to the Grove Racing Center in Rock hill, SC, to find out how to get the most from a mini SCT.

The Grove is a hard-packed, clay, off-road track built for 1/10-scale off-road racing with a mix of medium-sized jumps and a rhythm section. It also has a nice mix of low- and high-speed corners, so I knew it would be a great test for the minis. Before making any changes, I made a practice run with both trucks straight out of the box to get a baseline. The most obvious characteristic of the trucks is how nimble they are. Since they are so light and have such a short wheel base, they rotate very quickly. This does not mean that they oversteer, they just corner quickly. They’re also sensitive in the air, so it is imperative to get your jumping speed correct at the risk of being too nose up or down on landing. After the first run, I isolated the biggest handling problems to be traction rolling in the high- speed corners and too much porpoising over bumps.

Weight – Extra weight helped to get the chassis planted to the ground better, and it slowed the chassis motion to make the handling more predictable 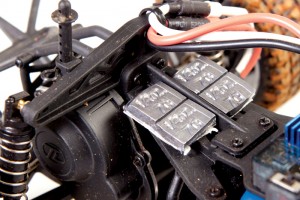 Adding some weight can help tune both the balance of your truck as well as the traction.

When any SCT feels edgy or like it does not have enough grip, adding weight can help—and minis are no exception. The only difference with adding weight to a mini is that each ounce or gram added is a bigger percentage of the total weight, so handling changes are magnified. Both trucks had plenty

of power to spin the tires, so I knew adding some weight would not hurt acceleration too much. I added four ounces to each truck. I put it towards the rear of the chassis on the 2WD to keep weight on the driven tires. I also put it towards the back of the 4WD, as it had a slight tendency to go nose down over some of the bigger jumps. The extra weight helped to get the chassis planted to the ground better, and it slowed the chassis motion to make the handling more predictable.