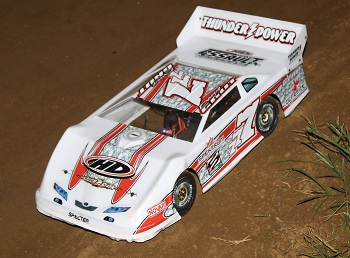 Last weekend while I was covering the 2011 Futaba Electric Challenge in Lincoln, IL I heard about a big oval race just down the road in the small town of Broadwell.  So Friday after open practice I grabbed a bite to eat, and then hit the road to see what all the commotion was all about.

The track is called Big Bill’s RC Raceway, http://www.bigbillsrcraceway.com , and that weekend was their 5th Annual Money Race.  Drivers from around the country were in town to compete in this two day event.   This race was also a DODC national points race so guys were competing to move up in the rankings.

Race organizer Eugene Ryder informed me that each year this race has grown in size and popularity.  In past events they have seen drivers as far away as California and North Carolina attend this race.  The forecast for that weekend called for a chance of rain and since the track is outdoors some out of state drivers opted not to attend this year’s event.  But despite that there was still an impressive 118 entries that night with drivers as far away as Kansas.

The race program calls for 4 minute qualifiers and mains.  The night I attended was rounds one and two of qualifying and Saturday night was the third and final qualifier followed by single A Mains.  Each main consists of 10 cars and the lower mains bump up the 2 top drivers.  Winners of each class are invited back the next year to defend their title and they get to race in the same class for free.  Your entry fee for the first class is $30, the second is $20, and then it is $10 each additional class.  Half of the entry fees goes right back to the class winner.  Last year the payout was an amazing $2250.

Oval racing isn’t as popular in my area so it was really cool to see so many oval drivers in one area.  The track really has something special going on there and puts Broadwell on the map.

So what do you think?  Is Oval racing big in your area?  Do we need to cover more oval racing? Let’s hear your thoughts!