Flat out speed, monster scale, and legendary durability. That’s what we ask for in an ultimate basher and that’s what Arrma looks to deliver with its up-sized and super charged Kraton 8S. The company calls it a “Speed Monster Truck,” which is as appropriate a name as can be; it’s built for speed and is a complete monster.

This 8S version of the Kraton is a much larger version of their already big 1/8-scale “little” brother Kraton 6S. The sheer size of the Kraton 8S is one of its most obvious attributes. Coming in at 30-inches in length and weighing over 24 pounds without batteries, it sets an outsized presence wherever it goes. Let’s dive a bit deeper and get to know more about this go fast monster truck. 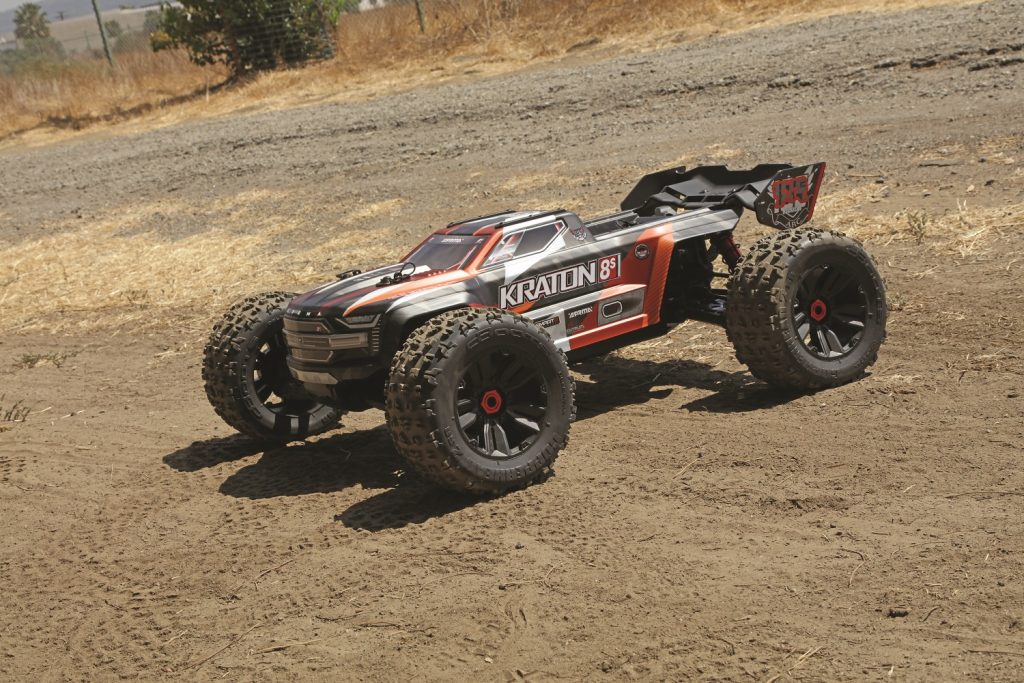 Arrma developed the Kraton 8S with three factors in mind, size, power and toughness and it shows. The goal was to build an ultimate bashing machine that can blast through dirt trails, conquer sand dunes and take jumps for big-time air. Durability is designed into the DNA of the Kraton 8S thanks to its metal-reinforced design. Kraton features metal shafts, turnbuckles and outdrives, plus all-metal internal gears. All this metal gives the drivetrain and suspension system unstoppable strength.
The Kraton 8S is a ready to run (RTR) four-wheel drive monster truck that comes with nearly everything you need to get out and bash. All that is required are two 4S batteries, batteries for the radio transmitter and a charger. It’s so big in fact; ours was delivered in a box that looked like it contained furniture in it. It was that huge. Removing the lid revealed the Kraton 8S, a radio controller and a plastic bag with instructions and some accessories and tools. It was nice and simple to get running. 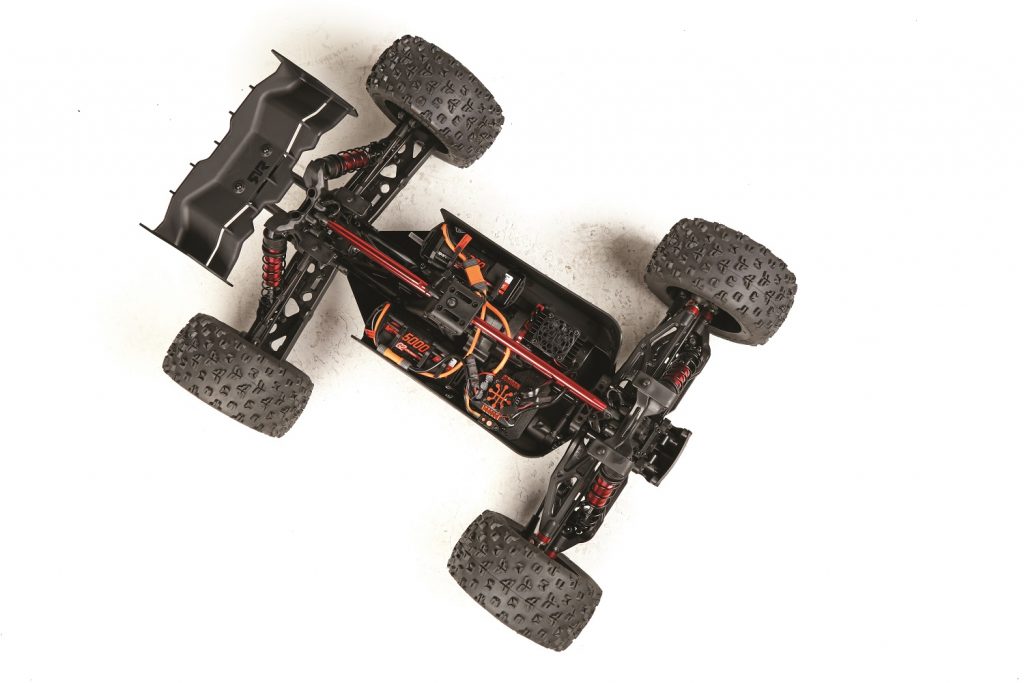 The great mass the Kraton carries requires some serious power to motivate it, especially to its top rated speed of 55 miles per hour. For this purpose, Arrma planted a 1250Kv Spektrum Firma brushless motor into the truck. The torque and acceleration the brushless motor produces is incredible, even in this monster-sized truck. For quick maintenance access, the motor is mounted with three bolts onto a sliding aluminum mount allowing you to get it in and out in a jiffy.

Durability is key to uninterrupted bashing. The driveline is designed to take the abuse that the powerful 1250Kv motor dishes out. In both the front and rear differential positions, you’ll find spiral cut differential main gears to handle 8S power as well as steel diff internals and outdrives. Its oil-filled center differential assembly is assembled of steel and aluminum parts. A robust 53 tooth steel gear turns on an aluminum diff case. No reliability worries here, the steel internal gears and outdrives efficiently transmit power to the front and rear gearboxes.

The Kraton employs a triple center brace system for maximum chassis durability. There are red anodized aluminum front and rear chassis-to-tower braces and a full-length red anodized aluminum tower-to-tower brace. The backbone of the truck is constructed from a 4mm thick 6061 T6 aluminum chassis plate. This chassis plate is beautifully laser etched with ARRMA logos. We really like this nice touch.

In order to fit the batteries needed, the 8S Kraton has two extremely generous battery trays. The trays are adjustable in length and have two self-adjusting hook and loop straps that hold batteries in place. A nice feature integrated on the battery strap buckles is wire guides that hold battery wires away from rotating transmission parts.

Thanks to the inclusion of Spektrum’s Smart technology, this monster isn’t only powerful bit brilliant too. Another component that is designed for easy access is the Kraton’s waterproof electronics module. The module houses and protects a suite of Spektrum electronics including its Firma Smart 160A ESC and SR6100AT AVC (Active Vehicle Control) receiver. The ESC uses IC5-type connectors and is fitted with high quality 10awg wires, which are thick enough to handle 8S power with ease. A built-in cooling fan also rides onboard the ESC.

“The Kraton looks tough. Its intimidatingly wide stance looks aggressive, which is a look we really like.” 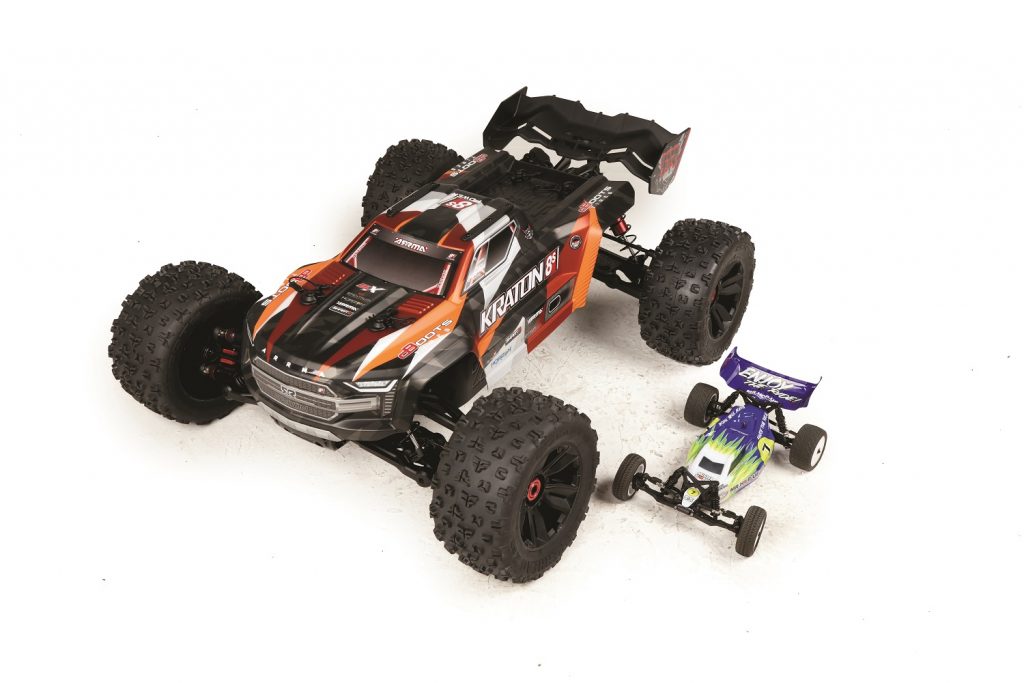 Arrma’s Kraton 8S completely dwarfs most other RCs, as seen here next to this Losi Mini-B.

Want a side order of real-time telemetry with your main course of big power? Kraton says, no problem. Spektrum’s innovative connectivity enables all the Smart electronics installed in the Kraton to send valuable telemetry data to the included Spektrum DX3 3-channel transmitter without requiring multiple wires, sensors, modules and links. Your smartphone can connect wirelessly via Bluetooth to the DX2E transmitter and use a free downloadable Spektrum Dashboard App to view motor RPM, ESC temperature, and receiver voltage, drive pack voltage and more data in real-time.

There’s so much Arrma innovation crammed inside the Kraton, you can expect a similar treatment for its exterior. First of all, we’d like to say that the Kraton looks tough. Its intimidatingly wide stance looks aggressive, which is a look we really like. We especially like the orange color version that we have featured here. If orange isn’t your color, it is also available in a fantastic looking green option also.

The body reveals more than just good looks, it’s made to last too. Roof protection rails reduce wear on the roof of the body when it ends up upside-down. The Kraton also has a body retention system that features body clip retainers that tether the body clip to the body. Another innovation is molded composite platforms that sit between the body and body clip that help spread the load from the body clip in order to protect the body from splits and cracks. These molded composite platforms are made a bit taller than the body post so they can protect the posts from wear.

Flip over the body and you’ll find a tough molded composite body support frame situated just inside the cab. This support bolts to the roof protection rails on the outside of the body to give the body extra stiffness and support. On the chassis, you’ll find a molded composite body protection tower located in the middle of the chassis that interfaces with the body mounted cab support for even more durability. At the rear of the truck, you’ll notice a high-downforce wing mounted to its bed. The wing helps keeps the truck level when jumping is made of composite material that is sure shrug off any impacts.

Kraton rides on multi-split spoke wheels with strong, oversized 24mm aluminum wheel hubs, and multi-terrain dBoots Copperhead 2 SB tires. Like the rest of the truck, the tires are monster large. Their aggressive tread enables the Kraton to have the confident traction that is needed to transfer the ample amounts of torque that its 8S power system churns out.

There’s a sticker on the back of the Kraton’s rear window that says, “Don’t Just Bash. Blast.” Well, who are we to pass up such wise words? So that’s what we did. We headed over to a gravel pit to put the Speed Monster Truck through its paces. With two fully charged 4S Spektrum batteries onboard, we let it rip. 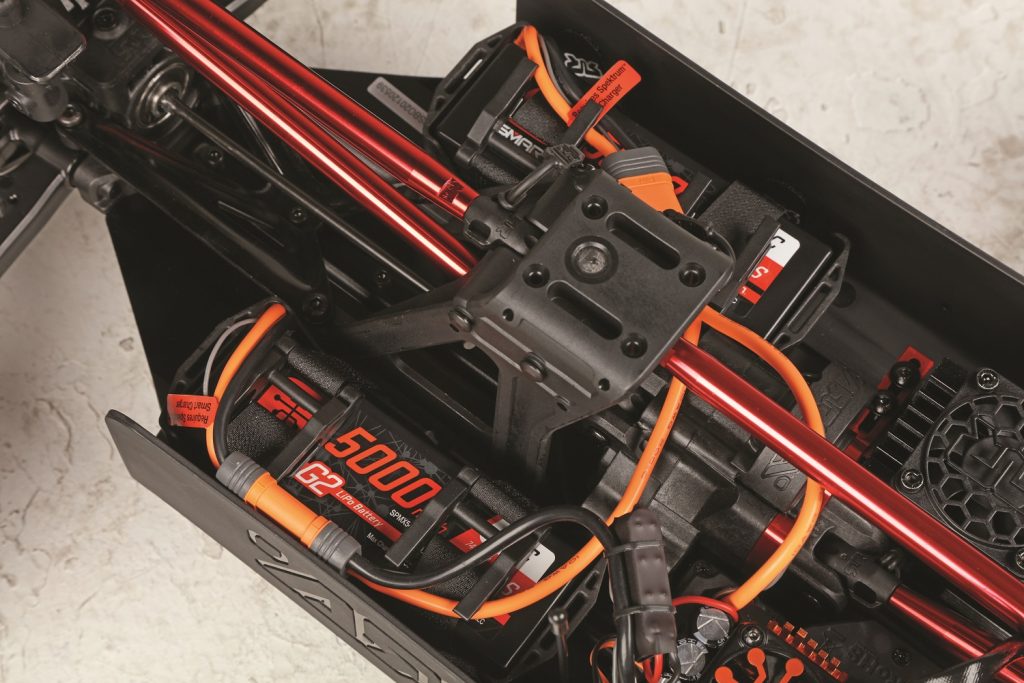 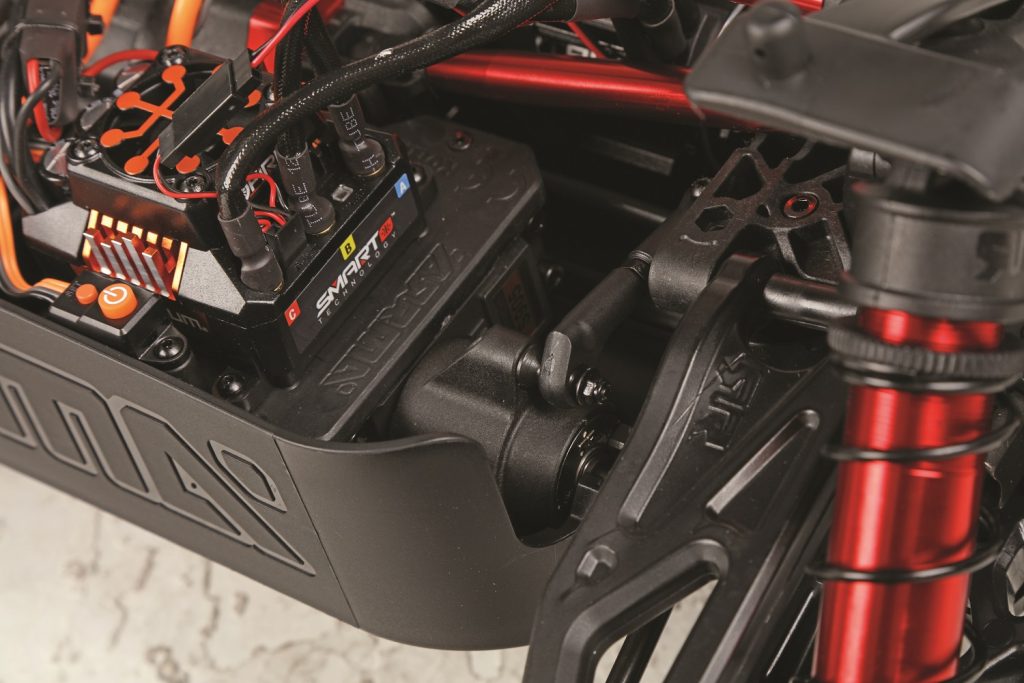 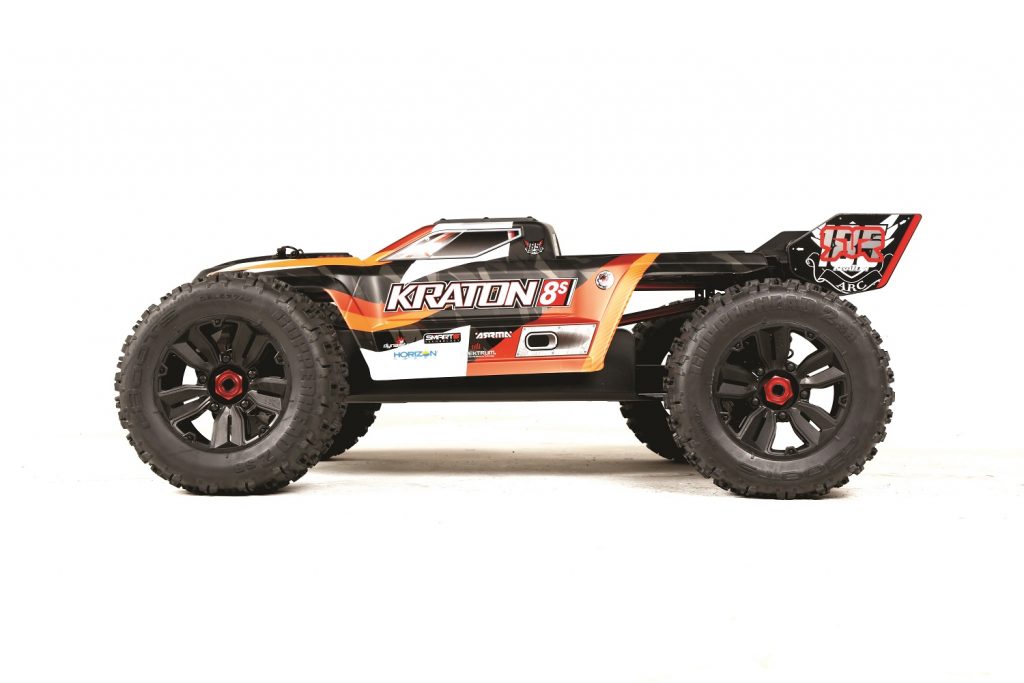 With beast mode on, we floored the trigger and let it rip on the loose gravel. It kicked up so much rock and debris when it launched, we were sent scattering for cover. Word to the wise; don’t stand near and especially behind the truck when you’re running it. True to its intended purpose, this oversized monster truck gobbled up any terrain we threw at it. It easily leapt over gravel mounts, caught air and stuck landings gracefully. Stomping on the throttle too much did allow it to break traction, which was a fun time too.

For the purposes of extreme bashing, the Kraton 8S does a bang up job. Being able to control an RC vehicle of this size already makes it fun, let alone its high performance capabilities. After an afternoon out, we were exhausted from laughing and having a good time with it. A reminder for those who get to drive it, the Kraton 8S is a really big, powerful and fast RC vehicle so caution must be taken when driving it. After all the rollovers and crashes we had that day, it didn’t seem worse for wear. The truck’s durability seems to be good to go. 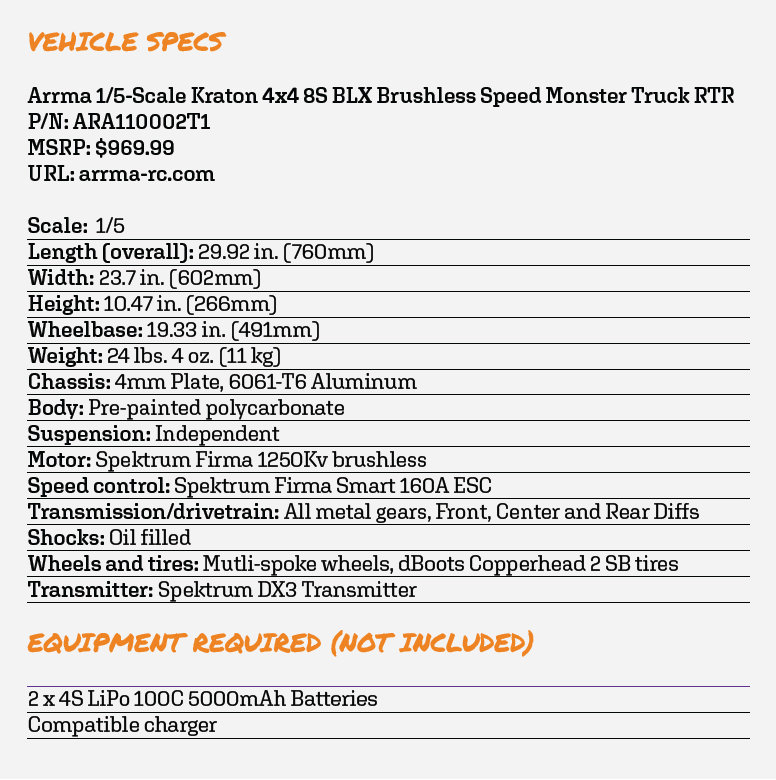 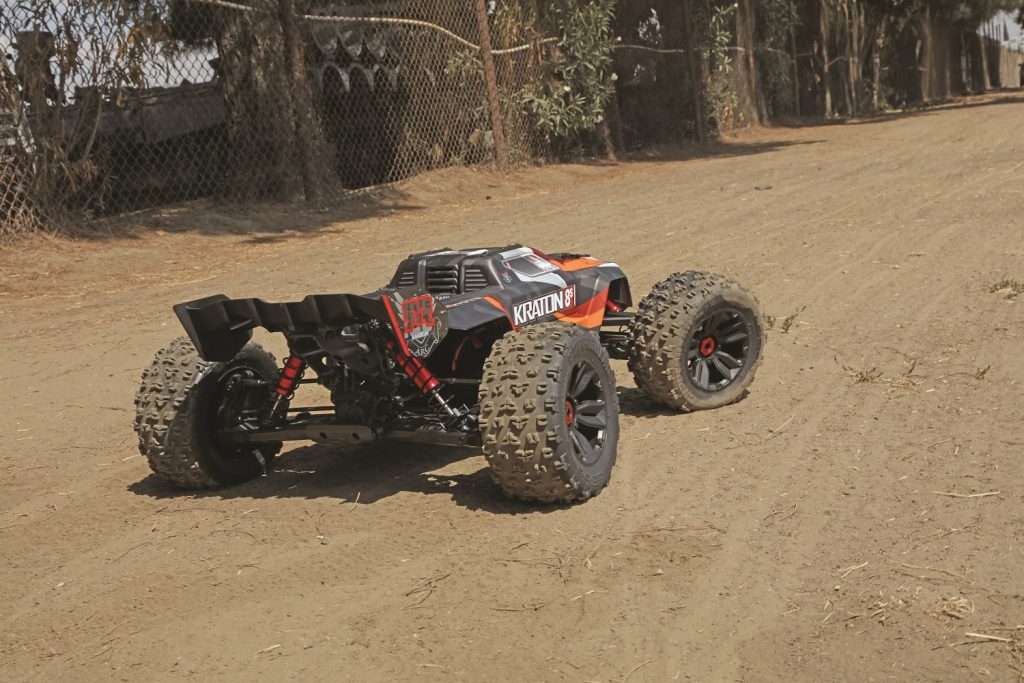 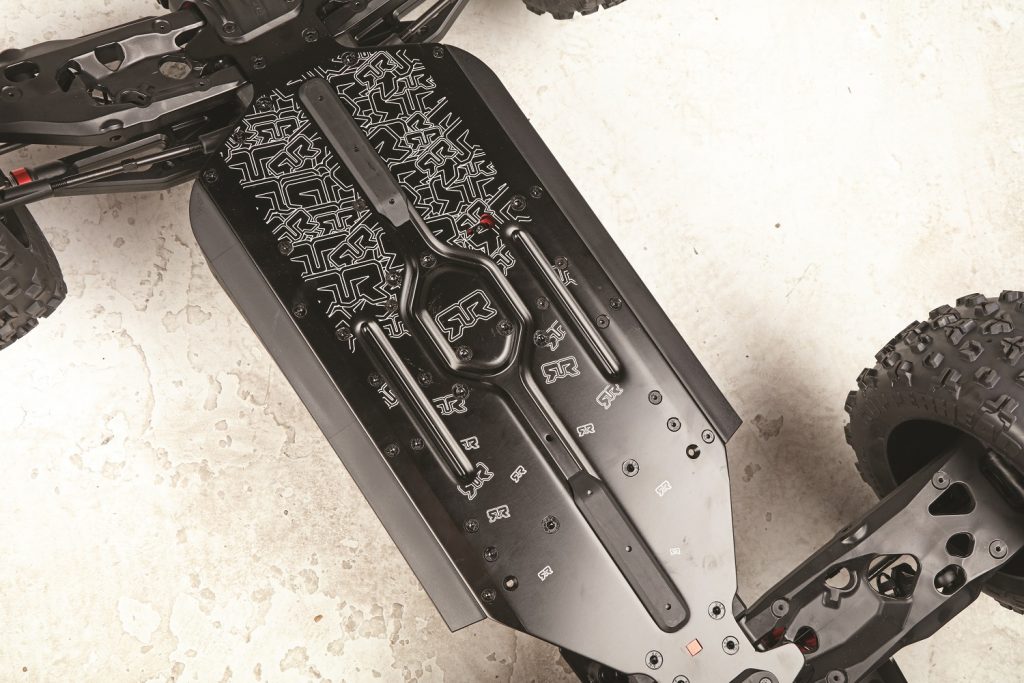 Big fun comes in big packages and the Kraton 4×4 8S BLX doesn’t disappoint. This Speed Monster Truck is a true beast in every meaning and provides its drivers and spectators a ton of smiles per mile not to mention some really satisfying bashing. It’s truly a conversation piece that impresses us with its looks, engineering and performance. In fact, we’re already looking to see if we have space in the garage to make this our next RC basher.