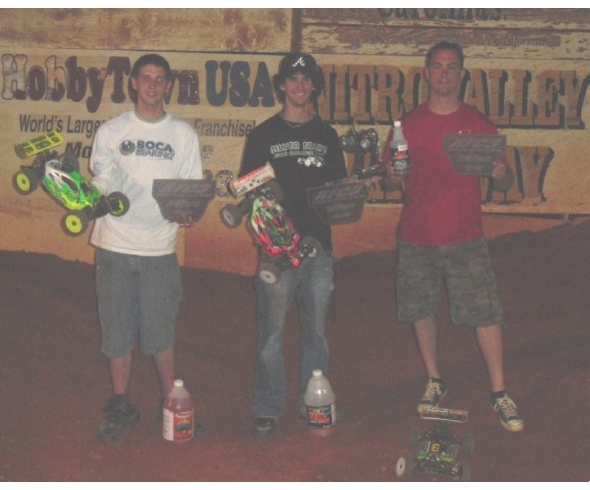 The Third Annual Race For a Cure was held May 1 at the Nitro Valley Raceway in Cherryville, N.C. This annual benefit is in honor of RC friend Don Tilley, who was a victim of cancer. The event drew 97 racers from several states and raised over $1800 for the local Hometown Heros group.

The overcast day kept the track hooked up and provided lots of great racing all day. Lots of electric entries with everything from a novice kids class to pro buggy racing kept the program moving.

The pro buggy A main was exciting, as there was lots of action up front. Barry was able to work his way up from the bottom starting position and take the win, setting a new fast lap time for the track. However, the real winners were everyone that was there and helped donate to the worthy cause.

The first race on the newly designed Metrolina RC Raceway was held on Sunday, May 2, in Charlotte, NC. The track formly known as the Farm2 was re-configured, but the racing surface remains the hard packed, dusty surface as it has always been. There was lots of traction the entire day for the 50+ attendance, mostly in the buggy class.

Barry once again ran buggy only and once again we got a late start on the day after the late night of racing from the day before. With the only practice being the qualifying round, he was able to TQ and secure a front starting position for the main. He was able to maintain the lead through the race and take the first win for the newly opened track.