Tamiya’s incredibly loyal following doesn’t owe itself to an unbroken string of RC racing world championships or claims of having record-breaking accomplishments. For most of the brand’s fans, it’s all about the company’s uncompromising quality, intuitive build-ability, and deeply engrained nostalgia designed and built right into its kits. For those who grew up on Tamiya products, seeing the red, blue and white Star Mark logo emblazoned on a box means that there’s something very special inside.

Tamiya doesn’t sit on its laurels, pat itself on the back, and tell itself just how awesome it is. The company continually innovates and creates new products that consumers never knew that they needed until they see it. Sometimes they bring it back decades later to hook new fans and reignite the passions of older ones.

For this writer it was the Tamiya Avante off road buggy that got me hooked. When I first saw it back in 1988 I knew that I had to have it and when it was rereleased in 2011, I had to have it again. The Avante pushed 80s RC technology to its leading edge and then some. Perhaps it pushed it a tad passed the limit. As fantastic as the kit was, it did suffer from being overly engineered with its major Achilles heels being fragility and cost. 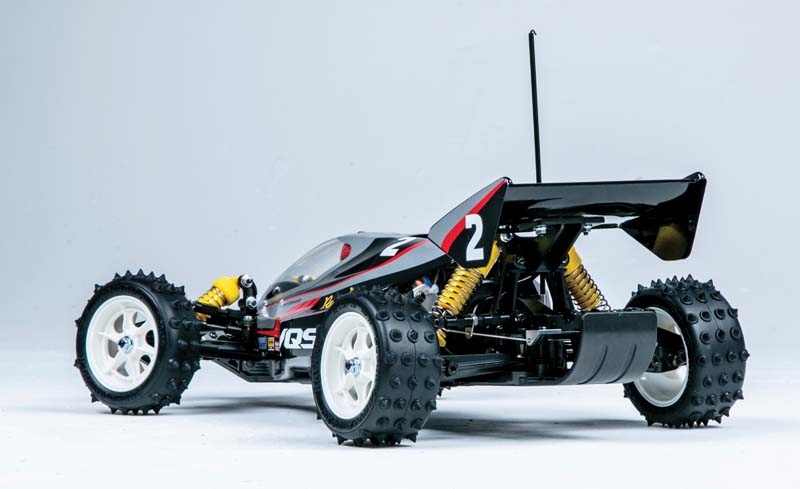 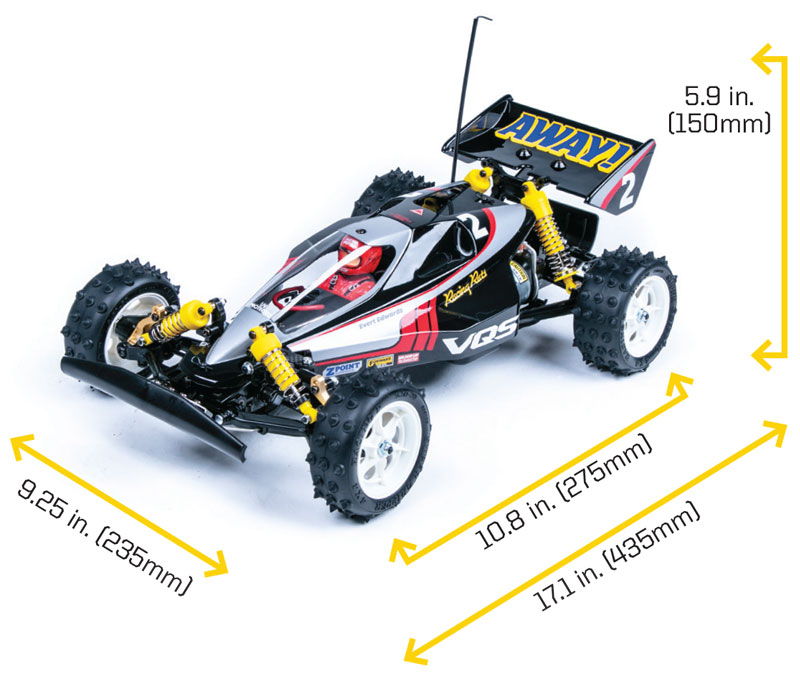 Later in 1988, Tamiya came back with a new take on the Avante platform. The Vanquish was also a shaft driven four-wheel drive buggy, but it shed many of the Avante’s trademark cutting-edge parts and materials such as super adjustable aluminum and steel suspension linkages and a double decker FRP chassis. Instead, the Vanquish went back to basics and replaced many components with robust ABS plastic parts instead.

The basic architecture of the off road racer still carried Avante’s distinctive DNA, but it was now made more reliable and as a bonus, carried a lower overall price. These are good things, right? Let’s not forget this was the 80s, a time when excess and indulgence were commonplace and sometimes even expected. So much so that at the time of its release, the Vanquish was affectionately referred to by some as the “poorman’s Avante.”

Like the Avante, the Vanquish featured a jet fighter-like body replete with a clear canopy, helmeted pilot and jet-like “air intakes.” Its aesthetic is sleek and aggressive and looks like it could comfortably live on an aircraft carrier’s flight deck. The Vanquish quickly became a favorite among Tamiya fans for its good looks and unique mechanics. Unfortunately for drivers and collectors, Tamiya ended production of the Vanquish in 1992. Since then, Tamiya has rereleased many of its most iconic RC kits for old and new generations to enjoy. Every rerelease gets gobbled up by Tamiyaphiles worldwide. Even the Avante and its variants have seen multiple rereleases since their initial drops.

Due to its rarity, collectability and lack of a rerelease, the secondary market for vintage Vanquishes over the past few years, for even well-driven examples, would fetch prices north of three to four hundred bucks and sometimes even more. Vanquish starved fans asked when or if Tamiya planned on rereleasing the Vanquish kit. Well, get ready folks, the Vanquish is finally getting rereleased, this time under the VQS moniker. Set to release about the time you are reading this article, the long-awaited Vanquish rerelease features all of the things that made the Vanquish sought after and even better. 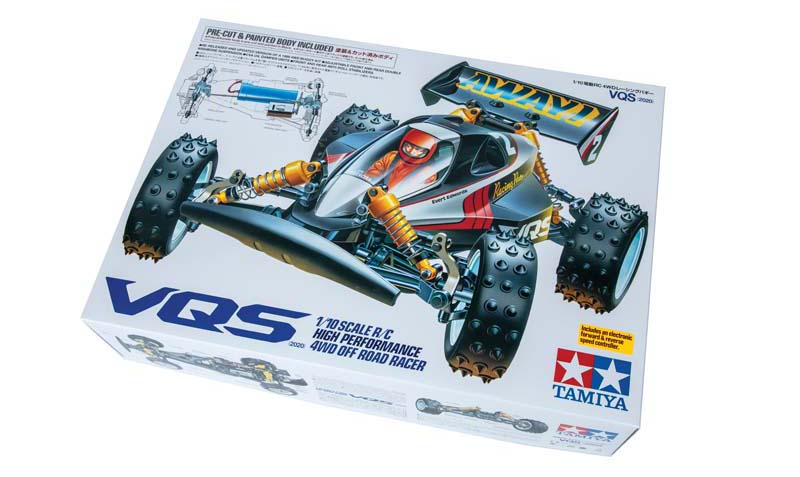 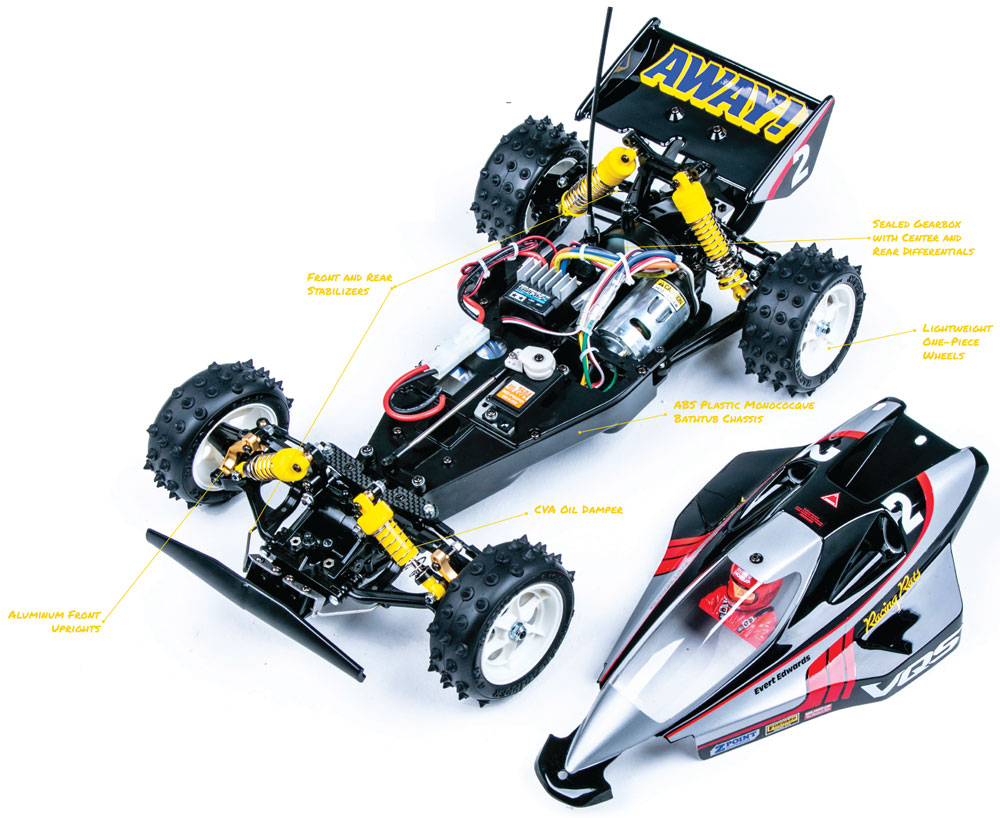 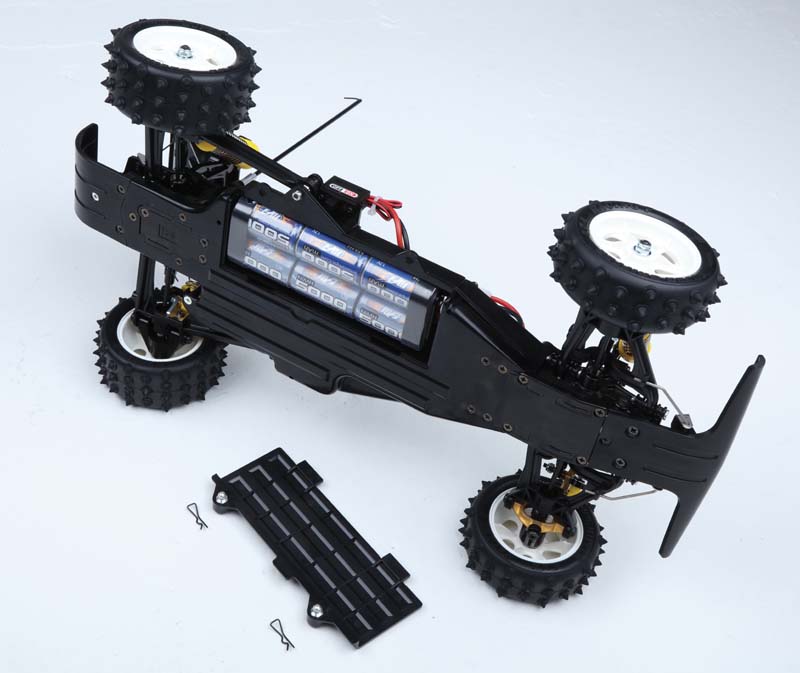 VQS’ battery door is secured and released by two body pins. We utilized a MaxAmps battery to power the buggy.

It’s clear that the VQS remains faithful to its Vanquish roots. In fact, from what we have seen, not much has changed other than a few key improvements. First up, let’s talk about what the Vanquish and VQS have in common. Most of the parts we studied including the front and rear bumpers, wheels, tires and most of its build parts look the same. The VQS’ ABS plastic monocoque chassis looks identical to the original and even retains the mounting cavity where the original Vanquish’s mechanical speed controller servo would sit. Remember those?

Like the Vanquish and Avante for that matter, the VQS employs three separate differentials in its driveline to get the most out of its transmission. The front and rear gearboxes house planetary differentials while a center differential is of the ball thrust bearing type. For ease of maintenance, the VQS’ front and rear gearboxes have easy access hatches built into them. No need to tear the whole vehicle apart in order to grease up or check the condition of some gears.

The buggy’s double wishbone suspension is coupled with a set of four CVA oil-filled shocks. Thick wire front and rear stabilizers help maintain consistent traction when the tires need it the most. Like the original, the reliable one-piece front and rear suspension arms have ball joints embedded in them for smooth and consistent feedback on uneven terrain. 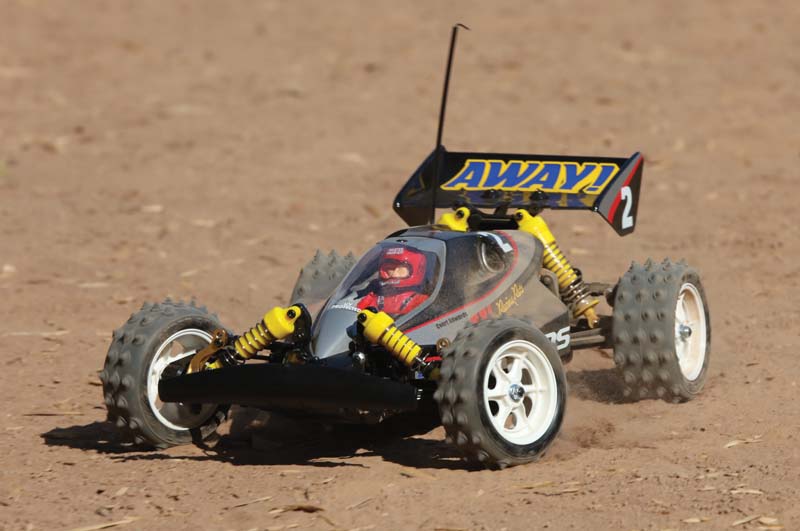 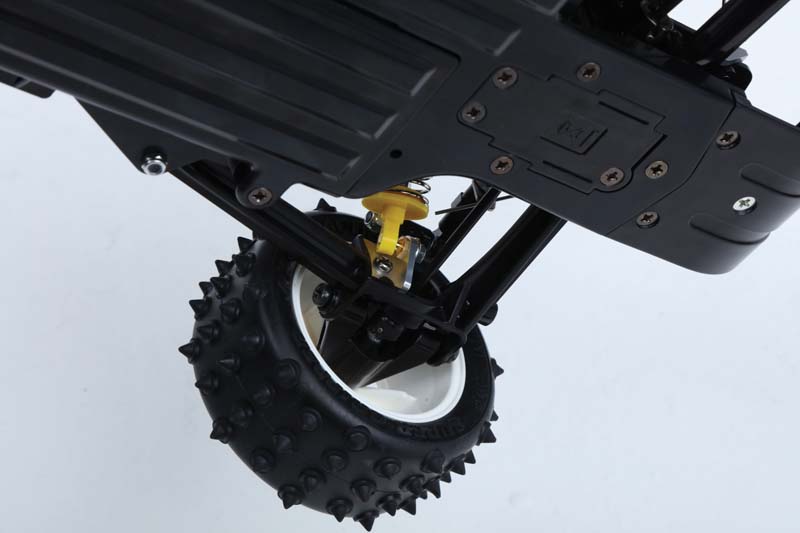 The new damper stays look to be stronger than the ones found on the 1988 Vanquish. 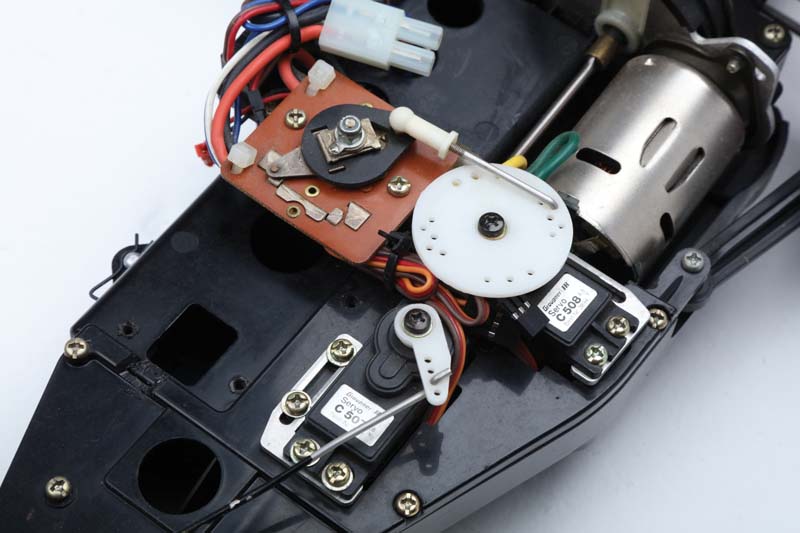 A picture of the 1988 Vanquish chassis and mechanical speed controller set-up. 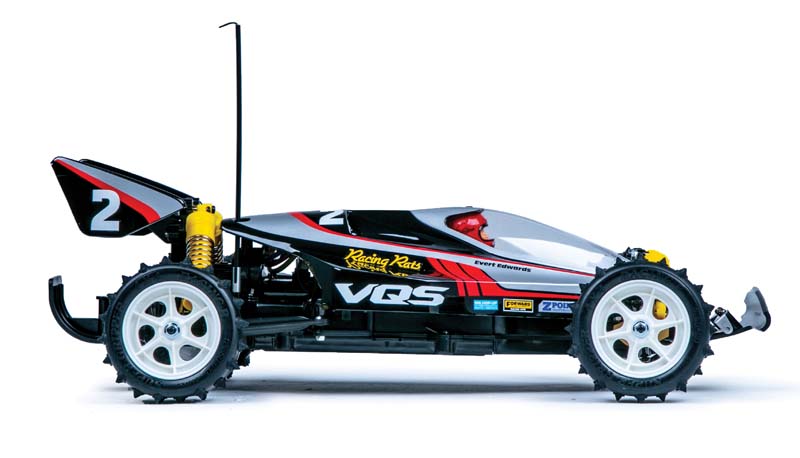 We’re sure given more time, die-hard enthusiasts will comb over all the minute differences between the original and the VQS rerelease, but in the meantime, these are the ones that we noticed. The VQS includes newly beefed-up, gold tone billet front uprights. This is a great improvement because we recall breaking plenty of the old cast metal ones back in the day. These new versions look like they can take more punishment than its predecessors.

The VQS also uses universal drive shafts instead of standard dog bones and drive cups. We also noticed that the shock mounting damper stays seem to be made out of a stronger metal when compared to that of the older model’s. In 1988, the Vanquish came with a servo actuated mechanical speed controller, while the 2020 version VQS comes with a Tamiya TBLE-02S ESC. We’ll take the ESC over a mechanical speed controller any day.

In the steering department, we observed that the steering plate now comes in carbon fiber while Vanquish’s was made out of FRP. It seems that thanks to its Avante linage, the VQS kit benefits from being issued many of the updated parts that were developed and included with the 2011 rerelease of the Avante and 2013’s rereleased Egress.

One thing that is obviously not a carry over from the rerelease Avante is the VQS body. The polycarbonate body comes precut and pre-painted. It still has a protective sheet over the body’s exterior so do be sure to remove it before applying its decals. We’d love to see a precut, non-painted version of the body made available in the future for greater customization options. 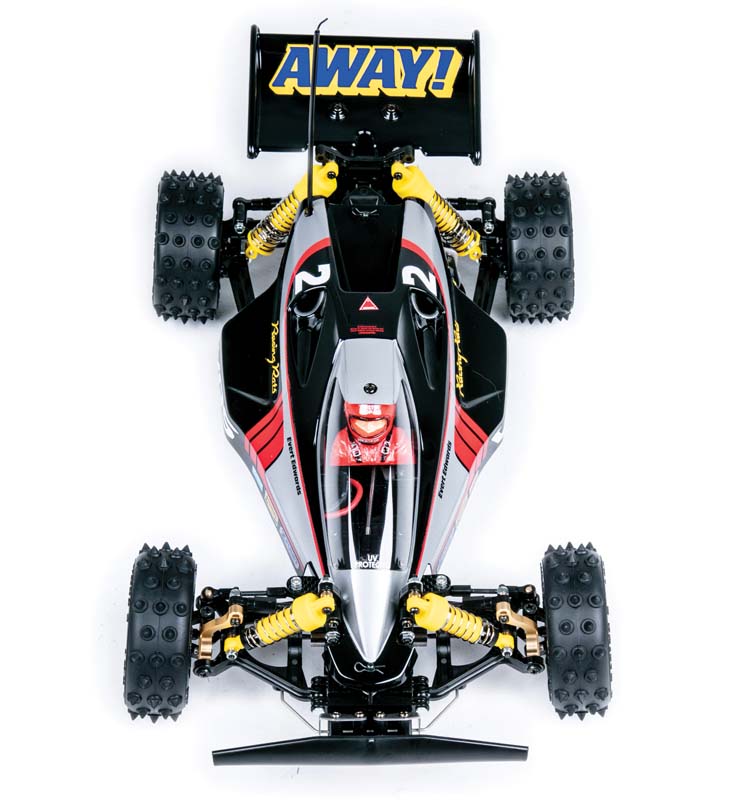 THE DRIVE
What can we say? The VQS drives like a Tamiya shaft driven four-wheel buggy is supposed to. That is to say that it is a talented and fun basher that handles much better than we remembered our Vanquish did back in the day. We outfitted ours with the stock brushed motor that the kit comes with so overall speed and torque were fine for the small loose dirt area that we drove it at. If we were going to run it in a large area or a competition style track, we’d lean towards putting in a more powerful brushless system in. 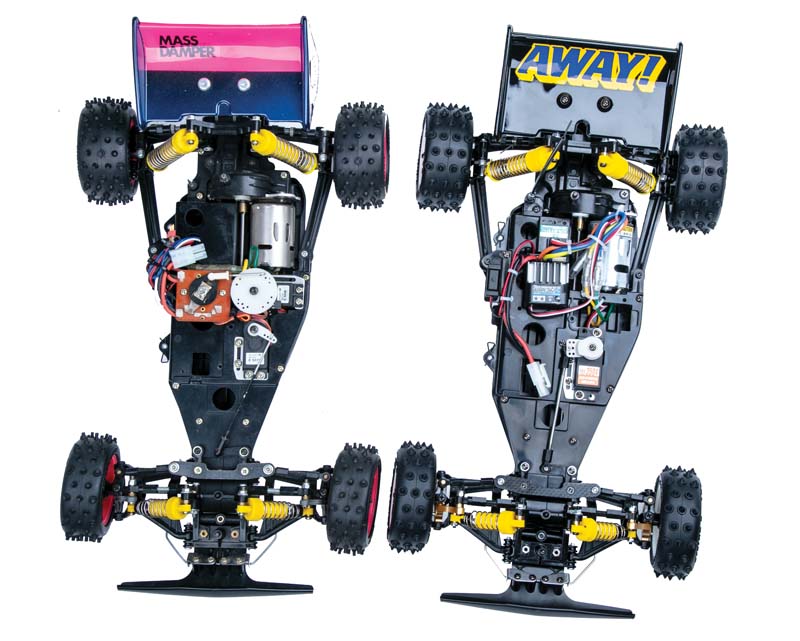 The original Vanquish is on the top and VQS is on the bottom. Note the metal damper stay that the shock is attached to in both pictures and also examine the drive shafts. Updated details like these are hard to see but make a big difference in terms of performance and reliability. 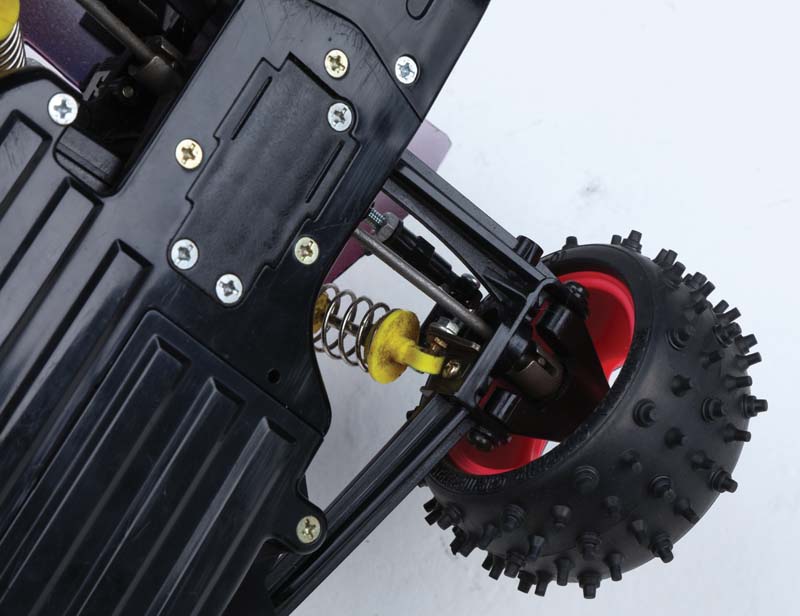 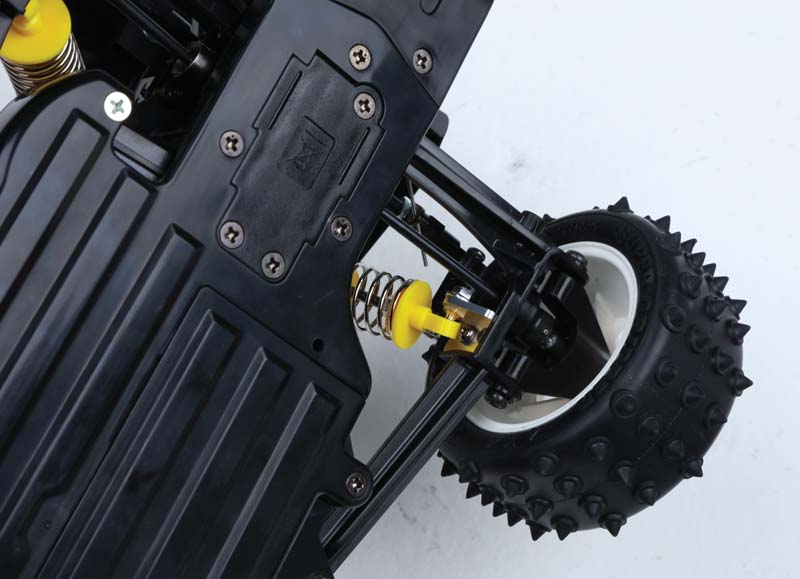 The Vanquish is finally back and better than ever. It’s a true testament to Tamiya’s design and engineering that they can continually bring back 30-plus year old RC kits and still have enthusiasts young and old lining up for them. The VQS is certainly a welcome addition to any Tamiya fan’s RC collection. We took note that the VQS’ release comes at the tail end of a truly unusual year. We’re glad that Tamiya has gifted us something to smile about in 2020.

Now looking ahead, we hope to see more great rereleases from Tamiya in 2021 and beyond. With all the kits in the Avante family tree but one rereleased, the direction that Tamiya fans and collectors are undoubtedly looking at now will be that of the Avante 2001. Will we have to wait as long as we did for the VQS? We hope not, perhaps 2021 will be the year.